I’ve gone out of my way to avoid watching any and all trailers for each of the Disney+ Marvel series so far, so from the time Hasbro unveiled this year’s new Loki in drab businessman-looking attire to when I ordered this Marvel Legends Loki Disney+ figure online to even after I had it unboxed and in-hand, I had zero clue what the heck this ML Loki was all about. But having now watched and fallen in love with the entire Disney+ Loki series—and with Sylvie and Mobius figures on the way—it’s high time I sat down and reviewed what is definitely the weirdest-clothed Loki action figure to-date… 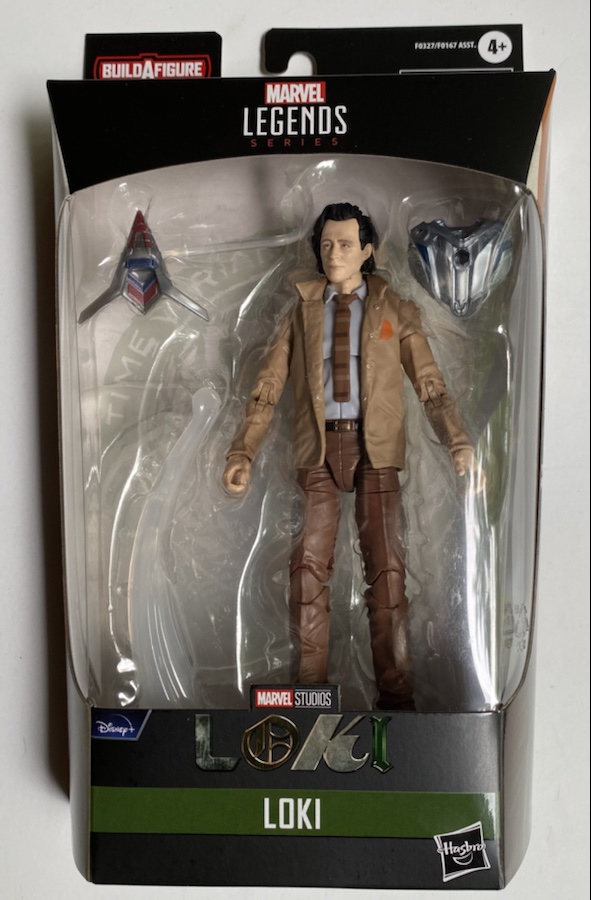 Spoilers: The Loki Disney+ series was freaking awesome, in my opinion. I did not—NOT—love The Falcon and the Winter Soldier in the way that I had hoped (Zemo aside), so I had some trepidations going into the Loki show blind.

But to me, the difference in quality and presentation between the two series was like night and day, and the character development in the Loki series was some of the very best seen across the entire MCU thus far. I cannot wait to own some Hot Toys sixth scale figures for this series (which had better actually be coming). 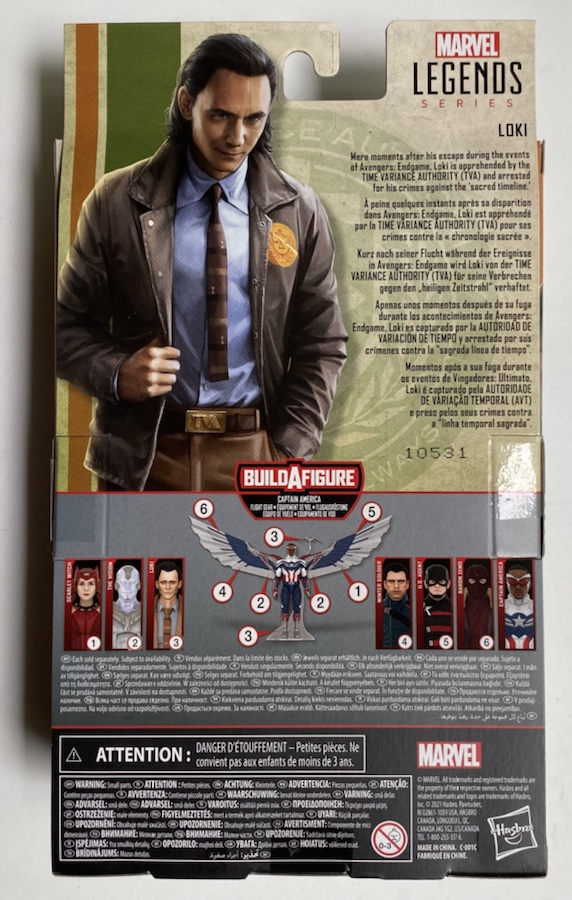 But while I wait for that 1/6 goodness, let’s take a look at the only Hasbro Disney+ Marvel Legends Loki figure released thus far! Marvel Legends Sylvie is currently up for pre-order to arrive later on this year, and Marvel Legends Owen Wilson (AKA Mobius) is a Target exclusive arriving… well, I guess whenever he arrives. Hopefully soon. So for now, the lineup is just Tom Hiddleston himself. 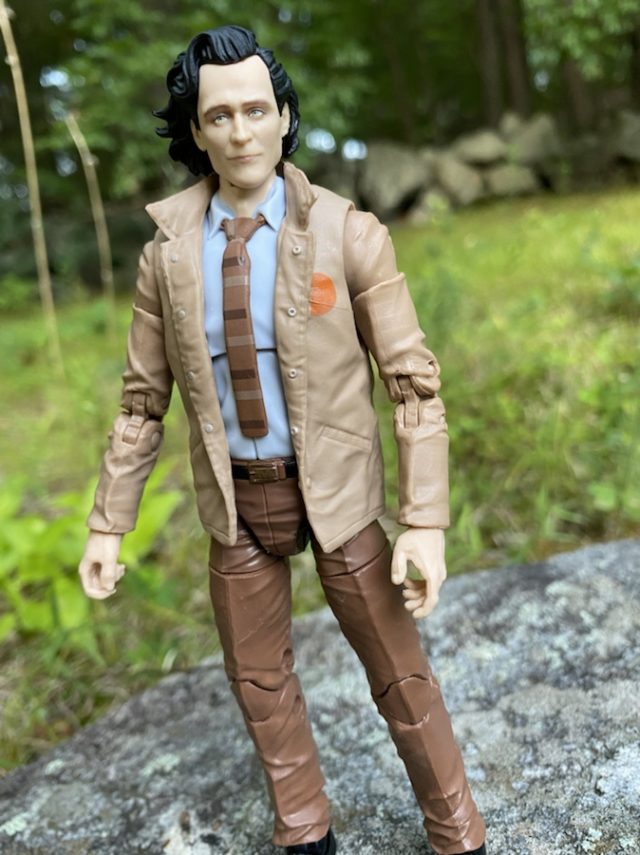 If this figure looks a tad familiar to you at a glance, that’s likely because we have seen the vast majority of the components for this figure a… few… times before from Hasbro. There’s a modicum of new tooling such as the new head, but this is by and large the generic Marvel Legends suit mold back again. 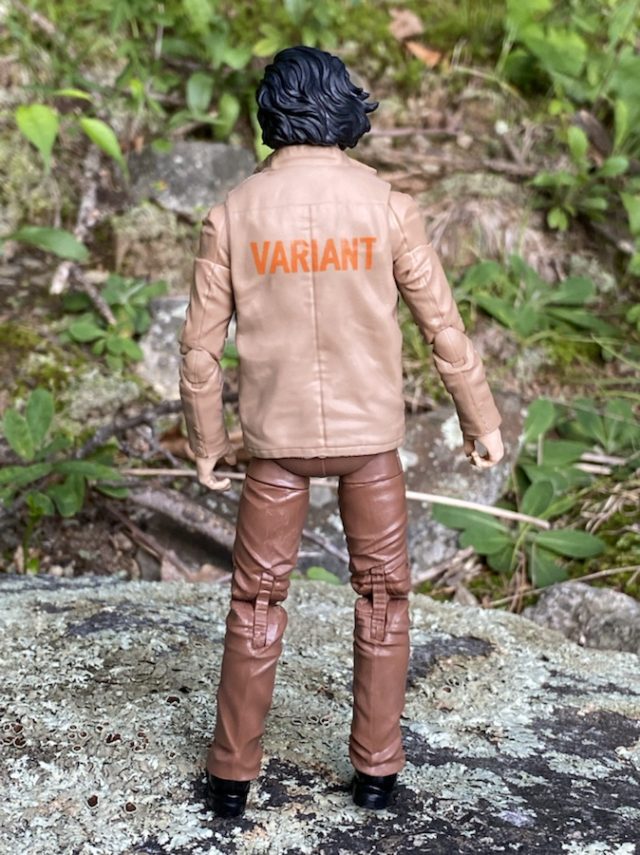 But hey—if it works, it works. And this mold is a pretty accurate representation of the TVA outfit that Loki was wearing for a good chunk of the series. No need for Hasbro to spend precious tooling dollars when the proper base to work from already exists. 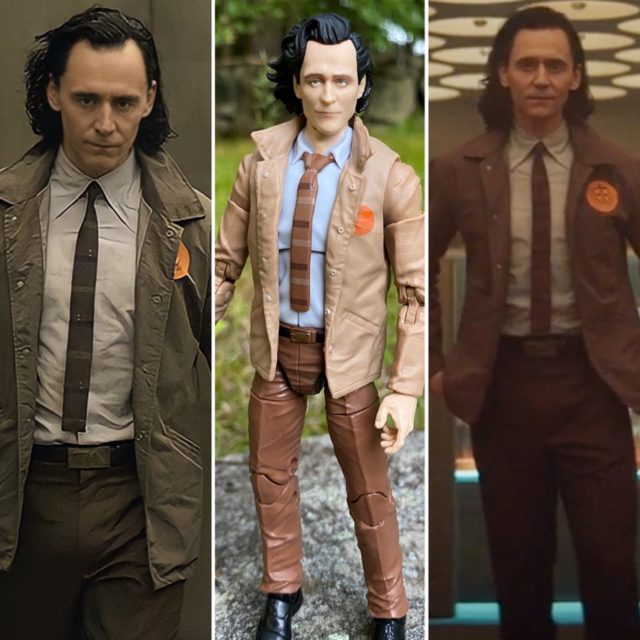 What doesn’t work… is the colors on this action figure! I’m assuming that Hasbro had to determine the colors for the jacket, pants and shirt based off outdated reference materials and just took a shot in the dark, but the colors here are just wrong. Loki’s jacket is much too tan instead of brown, his shirt is too blue, and the color of his pants is even somewhat off. 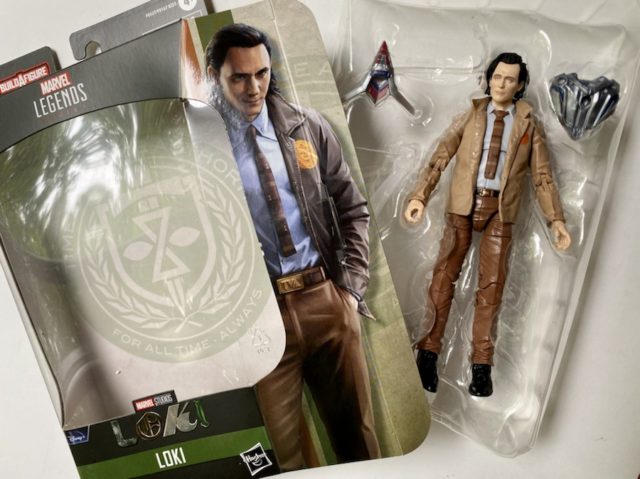 Even the photos on the packaging make it glaringly obvious that the colors on this toy are just all wrong. I understand that different lighting is a thing that affects colors, but this is too far off for me. 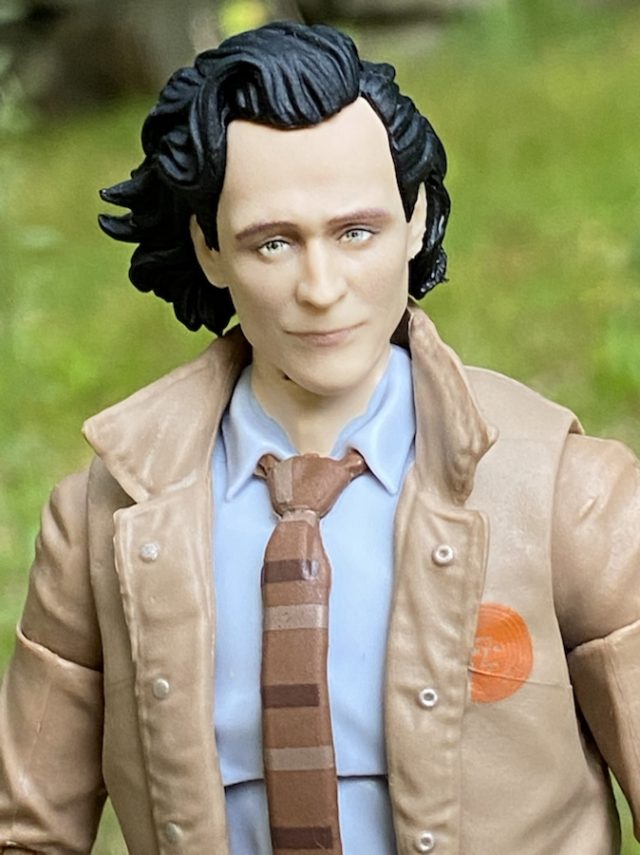 The Tom Hiddleston likeness in the head sculpt, however, is pretty grand. This is no Hot Toys likeness  and I wouldn’t expect a figure that costs about twenty bucks to have such, but the Tom Hiddleston resemblance is definitely there on the portrait, and I like the hard-to-decipher slightly-mischievous grin upon his face. 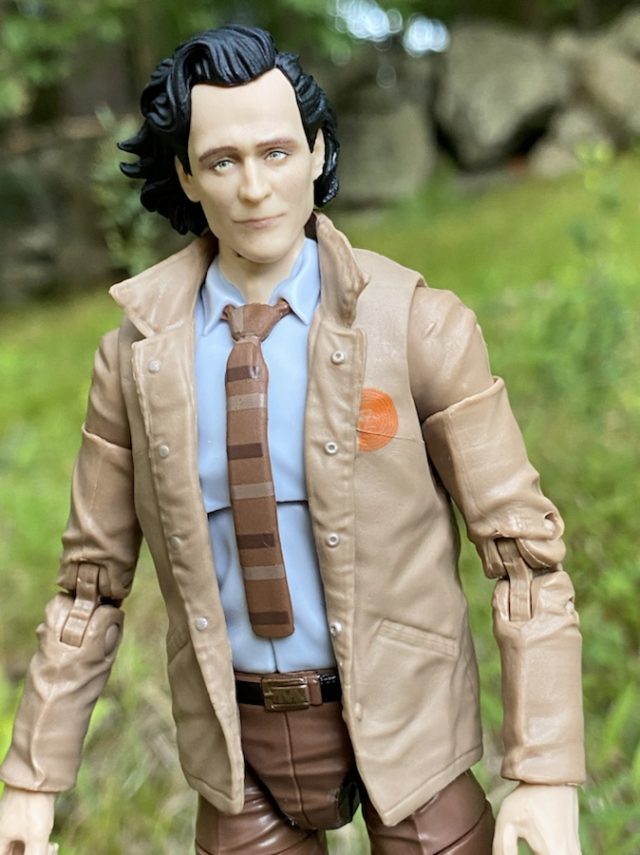 It’s also worth noting that Hasbro did a masterful job capturing the square-bottomed, striped tie that Loki is wearing. I honestly never noticed these details at all in the show, but they are present and they’re nice to see here in 6″ action figure form as well. 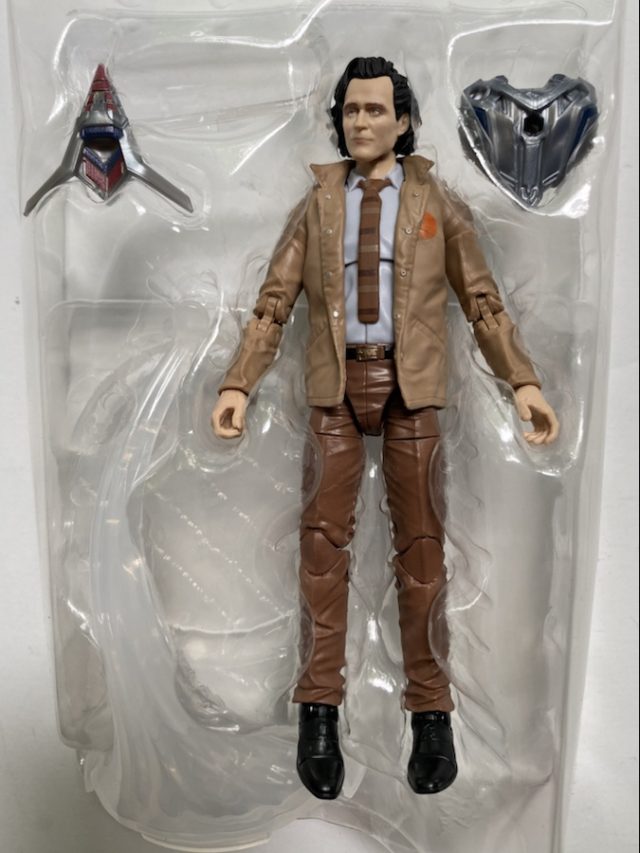 What isn’t present are, well… accessories for our new favorite Loki variant. There’s three pieces for the Captain America Falcon Build-A-Figure wings included–one of which being the beloved non-sentient Redwing drone–but these are definitely not extras for enhancing Loki himself, and there’s no way I’m counting them as such. 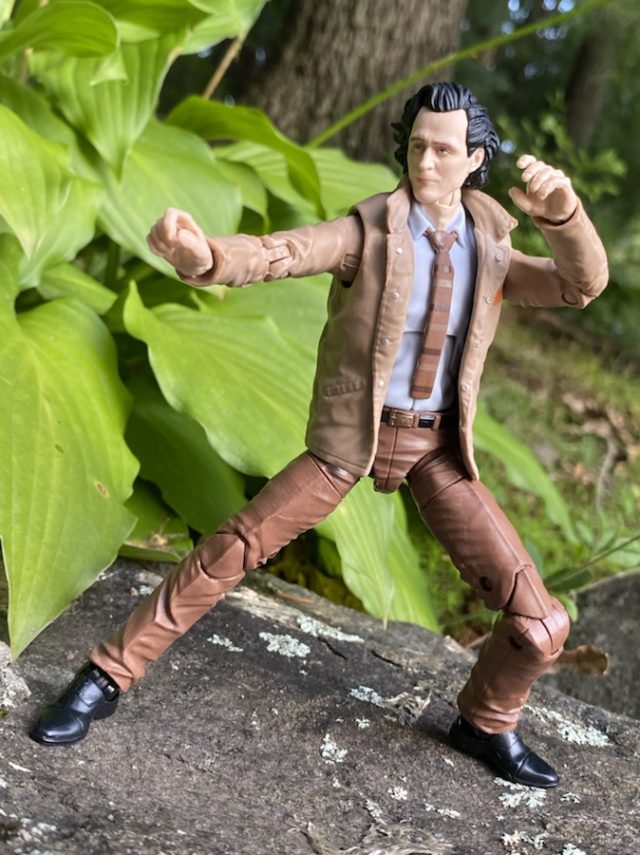 We get two grasping hands, no alternate hands, and nothing for those grasping hands to hold, which is quite a shame. While Hasbro may not have had reference or permission to give us a TVA TemPad or pruning disintegration baton, at least we could’ve gotten some daggers or a file folder for Loki to chill holding. Something. As it is, I’ve gotta stick him into kung fu poses so he’s not just standing there doing nada. 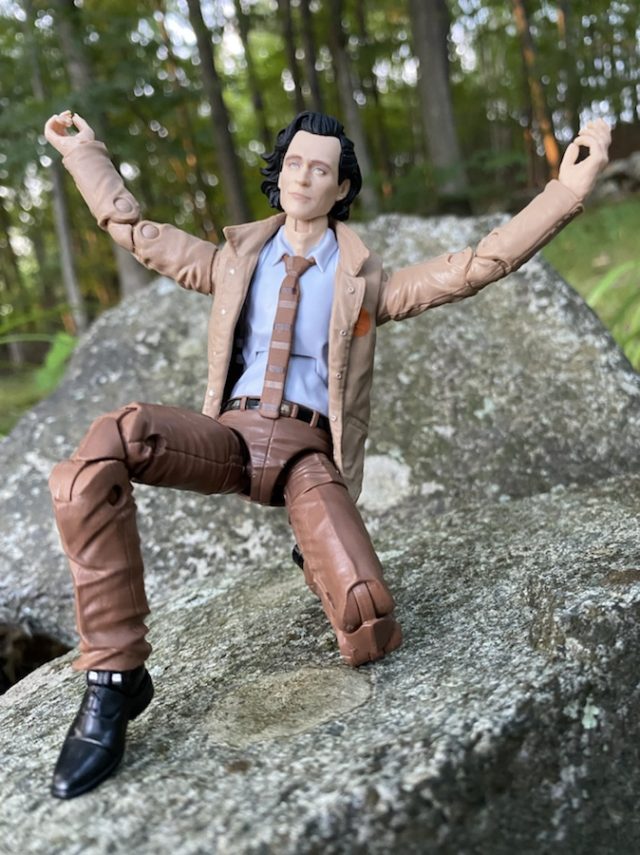 And thankfully, the God of Mischief can achieve quite a few poses, as he’s got a usual amount of outstanding Hasbro Marvel Legends articulation built in, including:

Everything works well with a good range of motion, and the jacket doesn’t get in the way as some might fear. 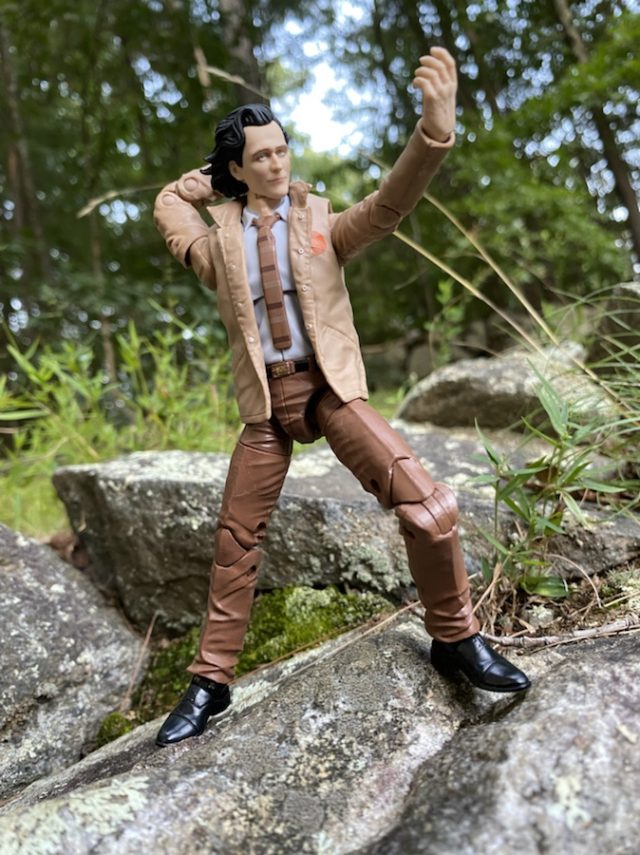 Overall: While my initial response to this figure’s debut was that it was a gratuitous reuse of the ever-popular “suit” mold and looked downright drab and awful, seeing TVA Loki in the actual TV series has definitely put this toy into a new light. Despite being not the most dramatic Marvel Legends 2021 figure, there was no need for Hasbro to reinvent the wheel—the existing tooling (with a few minor additions) worked just fine.

While this certainly won’t be topping the “fun” charts aesthetically, this is a solid Loki Legends figure with good construction and quality control, the usual amount of impressive articulation, well-done paint apps and a suitably mischievous Tom Hiddleston portrait.

What I am disappointed about is the colors looking drastically off for Loki’s TVA jacket costume from what’s seen in-screen. The only other downside to this release is that while I can’t fault Hasbro for not including items that they likely had no references for or weren’t allowed to add on, I think some accessories (no, Redwing absolutely does not count) and alternate hands were badly needed to spice this up. Basically, this is an excellent figure of Disney+ Loki… with nothing to do but stand around.

Although this six inch figure is not standing around on the pegs or on Amazon, where he’s totally sold out and escalating in aftermarket seller prices–I grabbed my Loki online from Entertainment Earth, who’s still charging MSRP and taking pre-orders for their next shipment now. With Mobius and Sylvie on the way, I can see demand for this Tom Hiddleston increasing even more as we approach the holidays–be sure to track one down now if you want it.