Play Arts Kai Marvel has had a good ride, with the series lasting longer and going deeper character-wise than anybody expected. But this time, I think the end may really be nigh. Not just for Marvel Play Arts Kai—but largely for PAK as a whole! For the first time since the heyday of Play Arts Kai, Square-Enix didn’t reveal a single new PAK from any line at SDCC 2018. But if Marvel PAK is really coming to an end, at least it can go out with a bang: Play Arts Kai X-23 is now up for order! 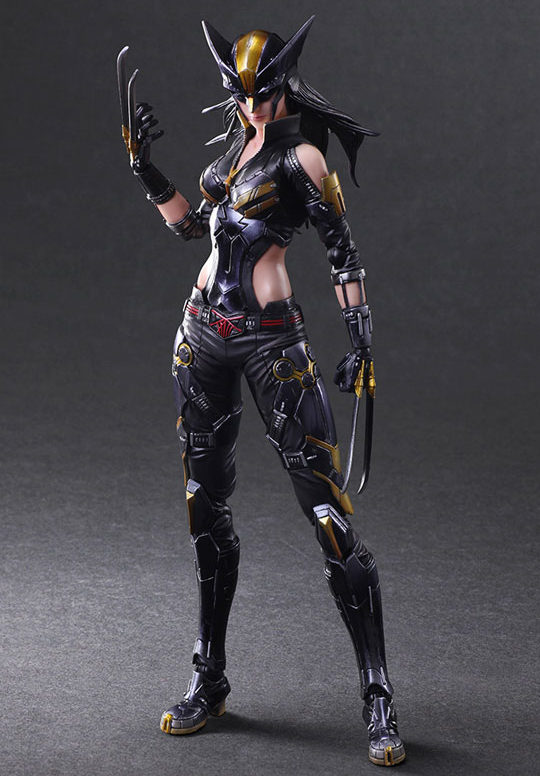 It’s definitely starting to feel like a bit of a shift in the collecting world, where smaller-scale figures and statues are slowly but surely taking over. There’s been renewed interest in statues smaller than 1:4 over the past year, and a huge burst of interest in smaller action figure lines like SH Figuarts and ONE:12 Collective.

Perhaps feeling the crunch from companies making smaller, cheaper figures, Square-Enix has seemingly put the long-running Play Arts Kai line on the back-burner to focus on their 6” Bring Arts Figures series instead. 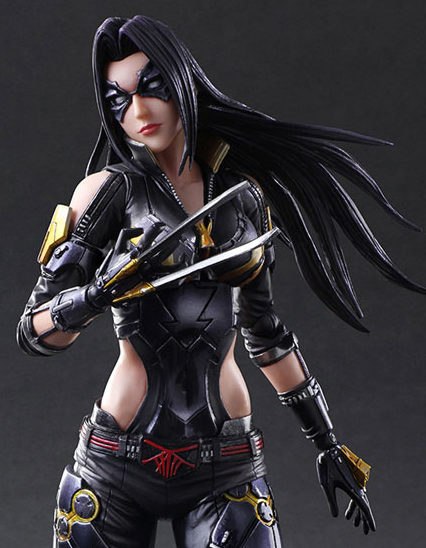 With no new Play Arts Kai figures premiered for the future at San Diego Comic Con 2018, it’s looking like the end of the road for the Play Arts Kai Marvel Variant line—with the X-23 PAK debuted at New York Toy Fair 2018 potentially being the final entry in the long-running series. 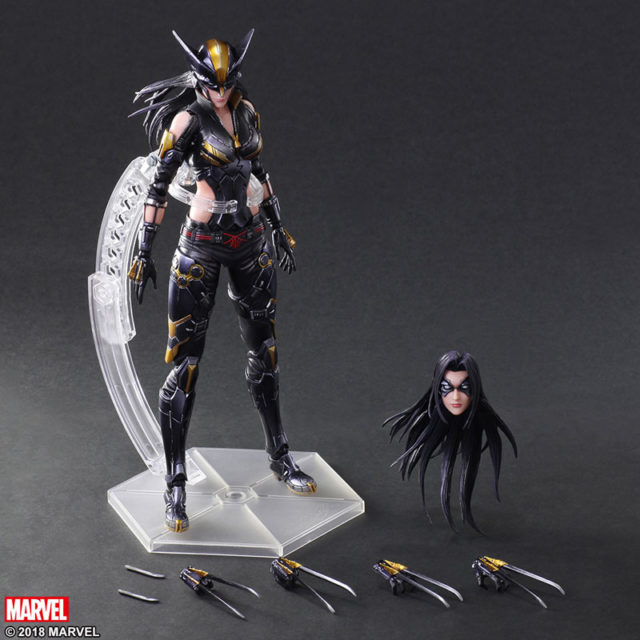 Although she doesn’t exactly come with a whole treasure trove full of accessories, the Play Arts Kai X-23 action figure does come with all the most crucial ones: three pairs of interchangeable hands, removable toe claws, figure stand with posing pole and two interchangeable heads. 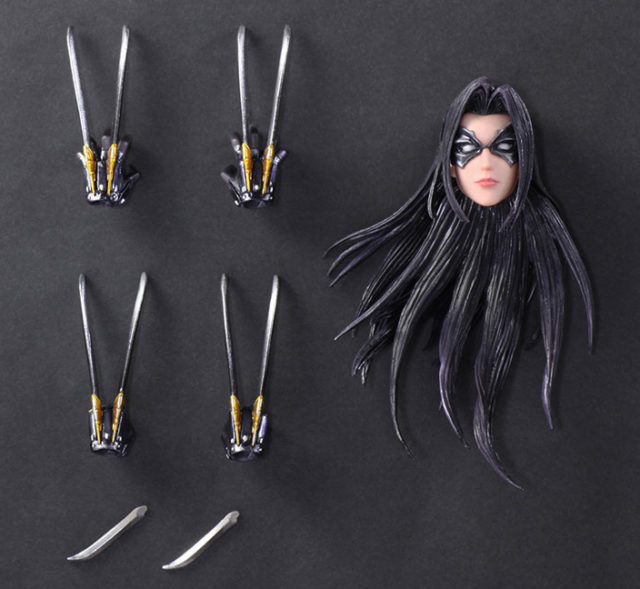 While Wolverine X-23 is neat and all, I’ve always preferred her X-Force look with the plain black mask over her eyes, so I’m jazzed to see that SE is giving fans both looks with this figure. 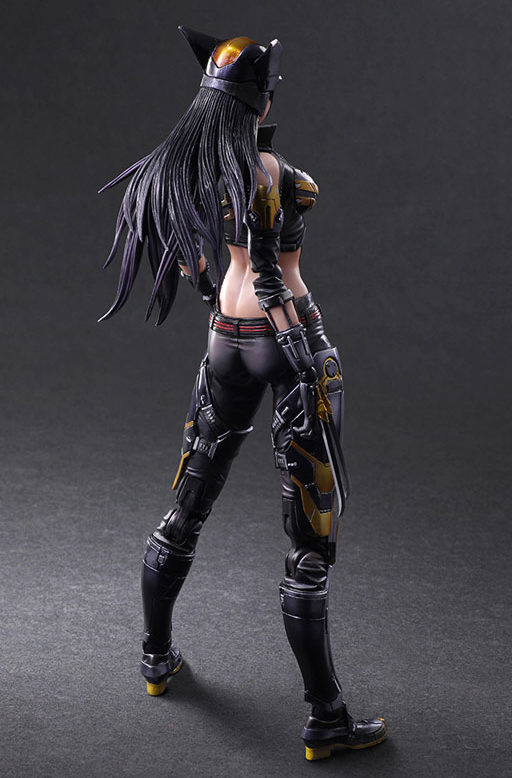 The articulation and posing potential on this Laura Kinney figure looks tremendous, with leaping (with her hair flowing back!) and crouching poses looking great! The Marvel Legends X-23 6” Figures are good, but this will almost certainly take the trophy for coolest X-23 action figure in the land. 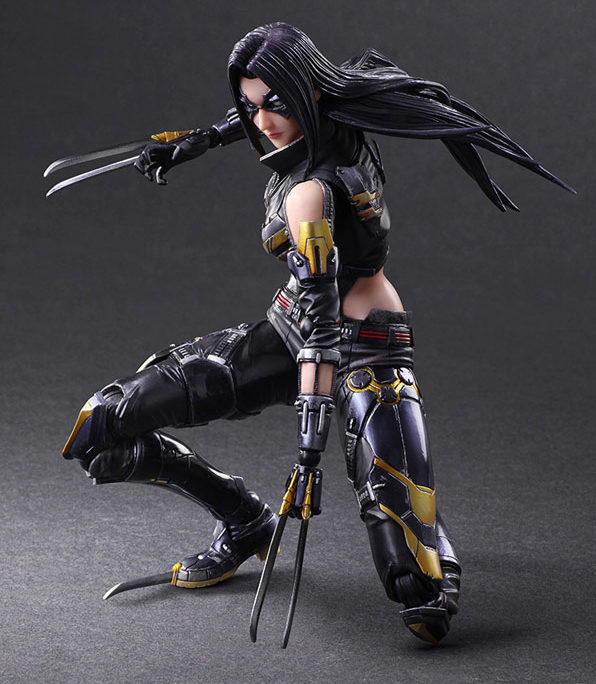 While the $150 price-point for a 10” figure isn’t going to make anybody giddy with joy, it’s not the WORST price in the world for a 100% unique-sculpted figure of this size and quality. It definitely ain’t cheap by any stretch of the imagination, though.

The necessary high MSRP limiting the potential customer base for these figures is likely one of the primary reasons that Square-Enix is seemingly switching over to the new Bring Arts figures at about half the scale (and half the price). 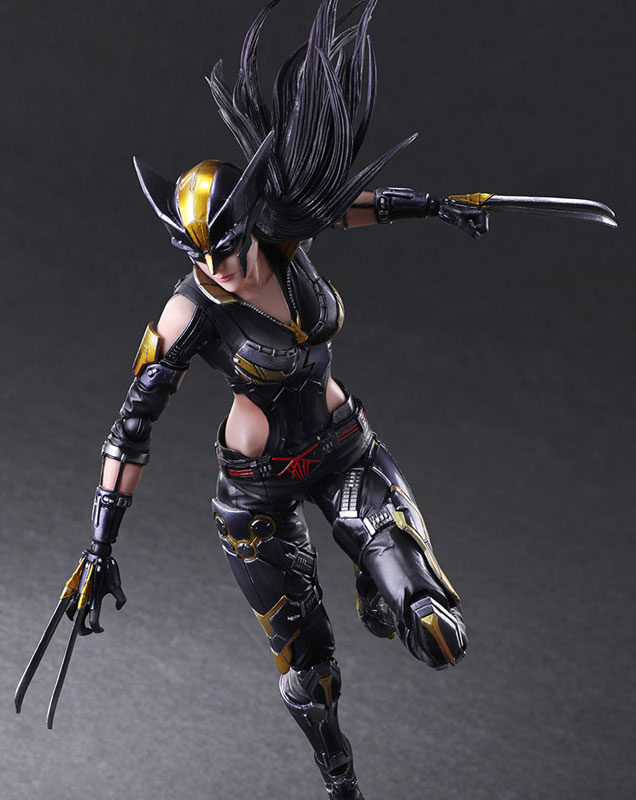 The X-23 Play Arts Kai figure is now available for order, and is expected to ship out in January/February 2019. EE’s free shipping offer is the only “deal” I’ve seen for Laura anywhere, with everyone else just charging MSRP plus shipping. Recent Play Arts Kai figures like Black Panther, Doctor Strange and Deadpool have all sold briskly and not been over-produced, so I have a feeling X-23 is going to be an under-produced tail-end figure that sells for a nice premium on the aftermarket after release.

Are you excited for this re-imagination of X-23 Wolverine, Marvel collectors, or are you about as over this line as Square-Enix seems to be? If this is the end, are you satisfied with the character selection and figures we got in the Marvel Play Arts Kai line?