As an impressionable 13 year-old when X-Men “Age of Apocalypse” hit comic book stores back in 1995, the appearance of a sinister, morality-blind alternate universe Hank McCoy absolutely blew my mind. And when that evil Beast crossed over to continue his mad science in the main Marvel Universe? Jaw dropped in disbelief! There’s zero question that Dark Beast is among the longest-lasting and most significant characters from the AOA—and an obvious choice for Hasbro’s first wave from the series. X-Men Marvel Legends Dark Beast is shipping this month from online retailers—is this a sadistic Hank McCoy worth dropping your dollars on? 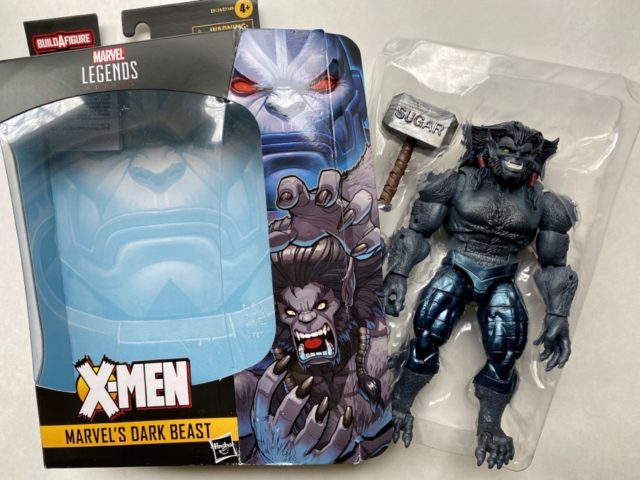 I think Hasbro did a bang-up job with the character selection for Age of Apocalypse Marvel Legends Series 1, as the series is loaded with characters that are either iconic or versions that exist in stories outside of the AOA itself. And easily one of the most significant refugees to survive the AOA reality and enter the 616 is the Black Beast himself!

When Hasbro unveiled the all-new (blue) Beast ML figure in early 2019, it was a foregone conclusion we’d eventually see a lot of that tooling reused first an evil Beast figure. And lo and behold, that iteration was revealed before the year was through as well! How’d he turn out? 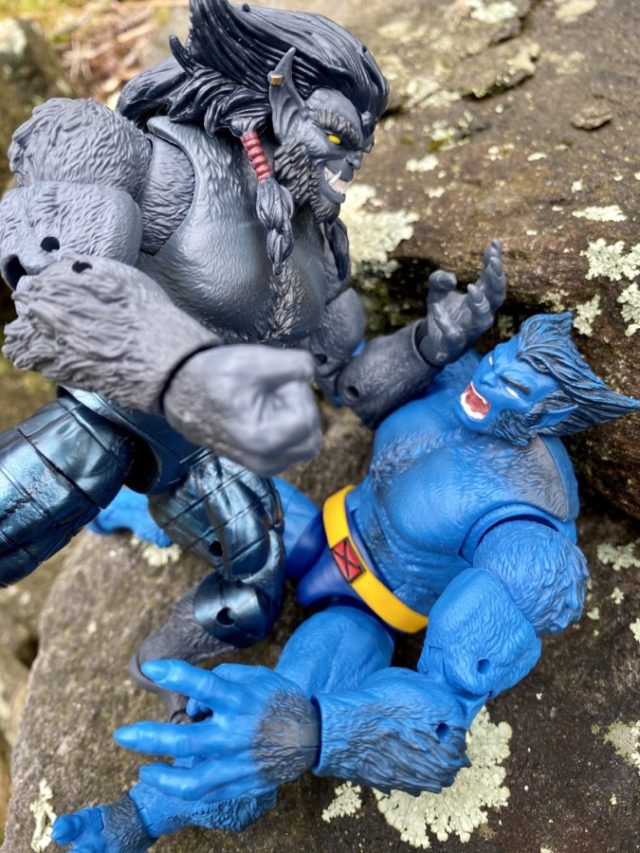 Even though some earlier low-quality photos made a few folks worry that Hasbro somehow got the color wrong and made this figure dark blue instead of grey, you can clearly see in the photos that the fur here is grey–just as it should be. 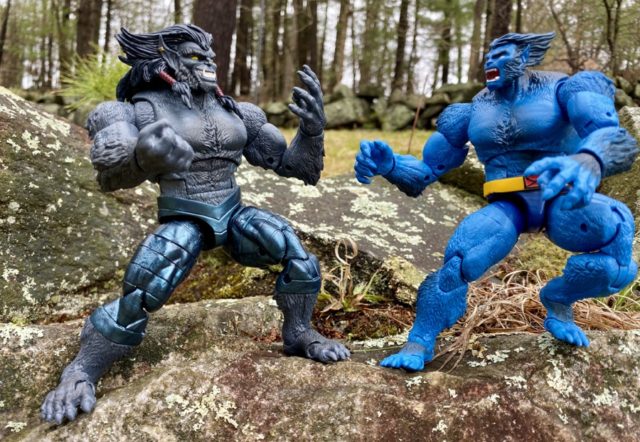 While Jim Lee Beast and AOA Beast share a lot of characteristics such as the fuzzy chest and arms, Age of Apocalypse Henry McCoy’s character design absolutely required a 100% new head and legs. The head is bang-on perfect—it has a total villainous feel of amorality, arrogance and cruelty. Dark Beast’s sculpted fangs and wild, braided hair complement his evil yellow eyes well. 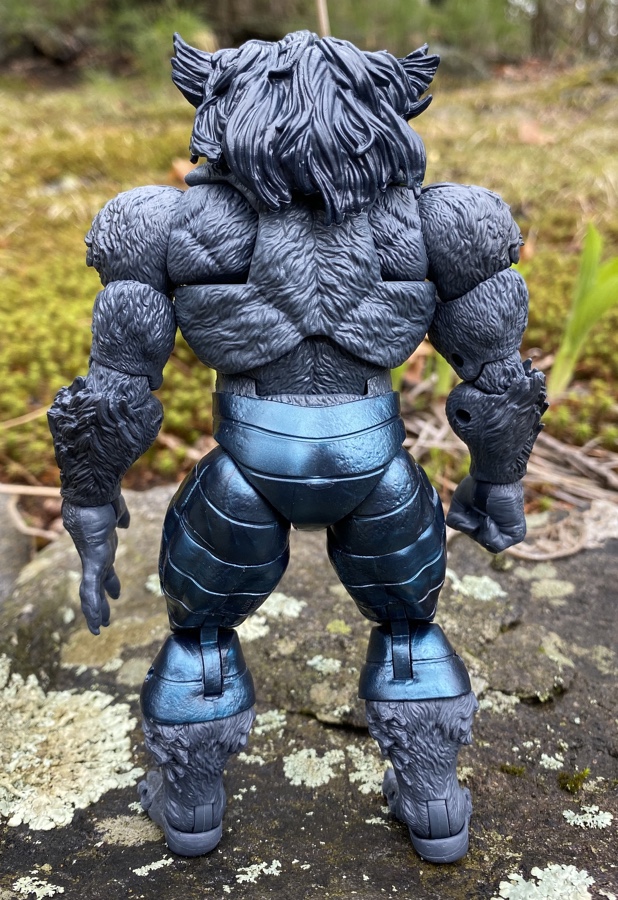 Meanwhile, the metal pants on the Dark Beast Legends figure’s legs look exactly how I remember them from the Age of Apocalypse and most of his 616 appearances. I’m not sure exactly when and where Hasbro will find a way to reuse these legs (any guesses, anyone?), but they’re excellent here and I’m thrilled Hasbro tooled them up for us. 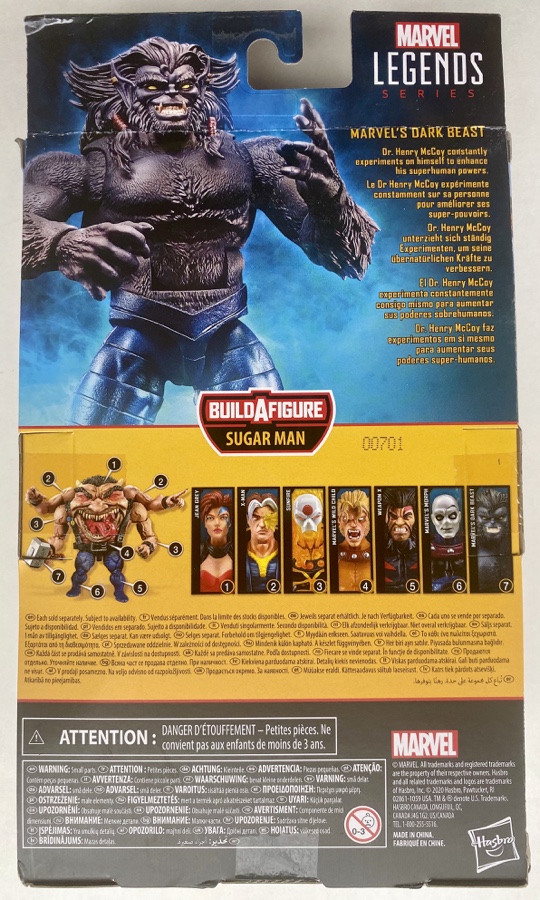 Toybiz released an oversized Dark Beast of their own way back in 1996–which was actually a really spectacular looking Marvel figure for that time—but the scale on this new Hasbro version definitely allows him to fit into a display much more convincingly. 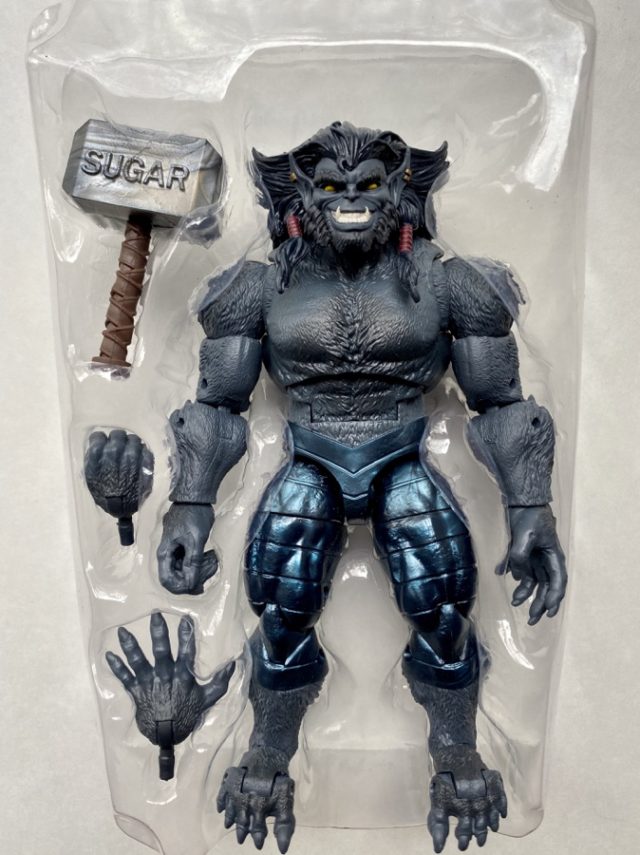 We get three accessories for the X-Men Legends Dark Beast: two repainted hands from last year’s blue Beast, and the mighty hammer of the Sugar Man Build-A-Figure. 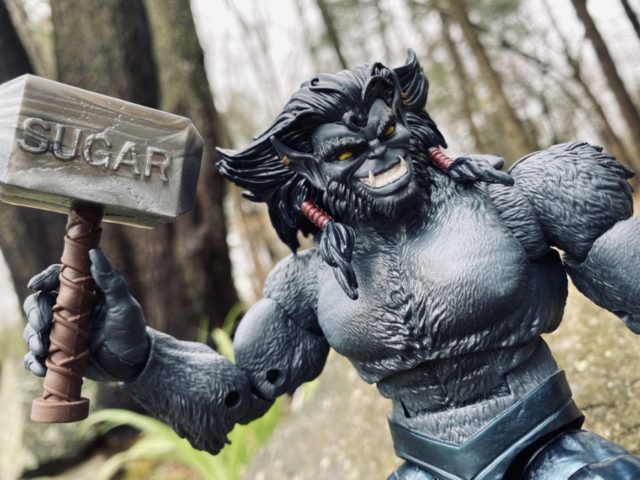 The hands are pretty mundane stuff that I don’t mind having, and I appreciate that Henry can actually rightly wield the Sugar Man’s hammer himself. There’s no other accessories I can think of that I’d want for this character, so these are fine with me. 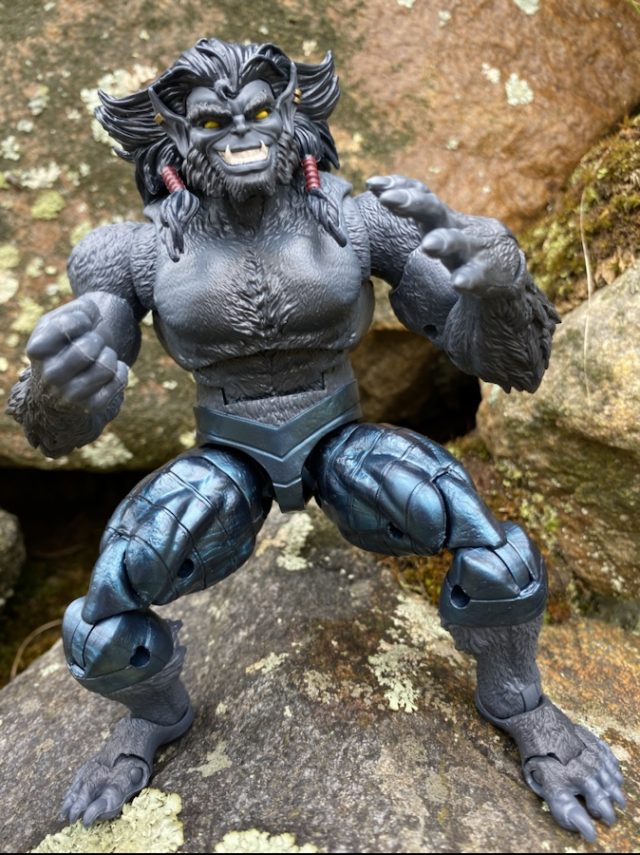 You would expect an acrobat like Beast to have a huge amount of articulation and a wide range of motion—and just like last year’s version, Dark Beast is totally packed with posing potential. Here‘s the rundown on his articulation scheme: 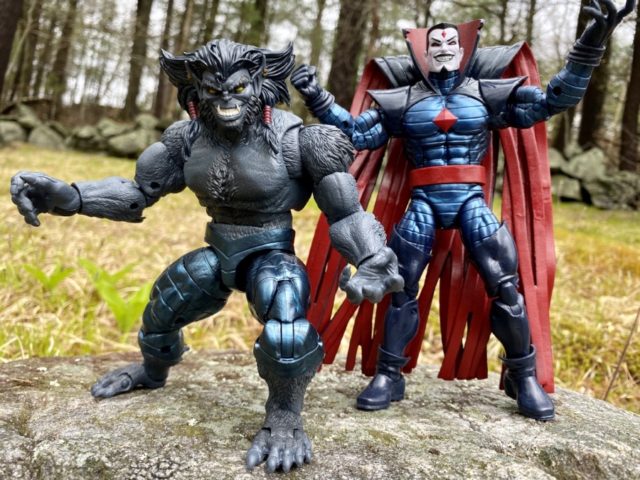 There’s a tremendous amount of flexibility here, with nearly endless opportunities for posing—far more than I’ll ever take advantage of. The head is really large and can’t get forced off easily if you turn the figure’s head too sharply, but otherwise all the POA work marvelously.

And on the paint deco side, I’ve got a whopping zero complaints. The slightly iridescent metallic blue paint on the “metal” pants is a beautiful contrast to the matte paint on Black Beast’s fur and hair. The paint apps are masterfully done and the toy looks great. 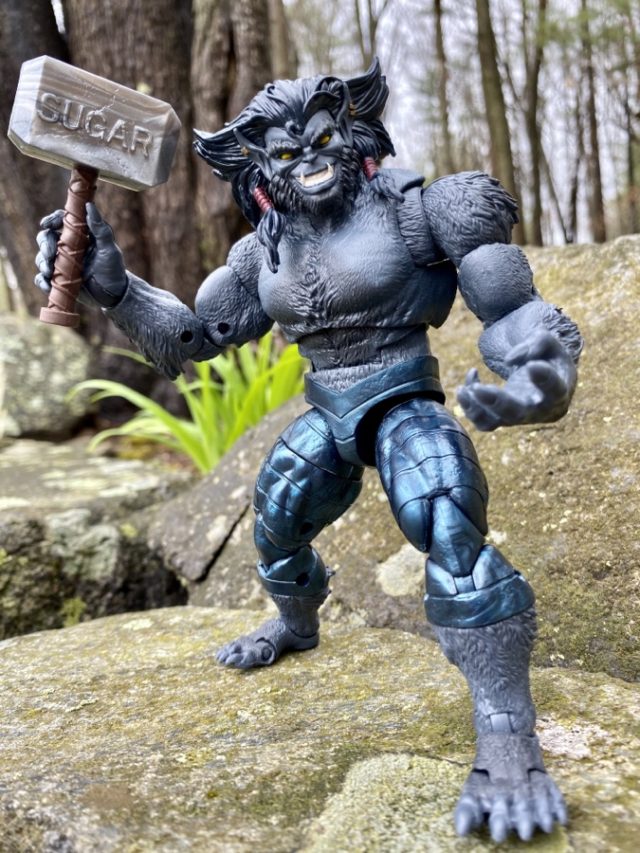 Overall: Last year’s X-Men Legends Beast mold was a winner then and now, and I’m psyched that Hasbro has pimped it out with unique topping to make the definitive Dark Beast Legends figure. This is not a character I would expect to see tackled by any other company any time ever, so Hasbro needed to make this a winner—and they did.

Sculpting on the metal pants and portrait are outstanding, the alternate hands are fine accessories, and the paint and quality control are both tops on this figure. I’ve got no complaints besides his head occasionally popping off during posing due to the size. There’s no need for any company to ever do a toy of this figure again. Hasbro victory.