Collectibles companies have been playing it safe over the last couple months and heavily limiting new pre-orders during this challenging economic time for many, but we’ve finally started seeing more new pre-orders over the last couple weeks. And to close out April, Hot Toys launched their first two new Marvel 1/6 figures in a while: the Hot Toys Spider-Gwen (plus Spider-Ham) & Endgame Captain Marvel figures are now up for order! Both these figures are from movies over a year old—are you still interested in them? 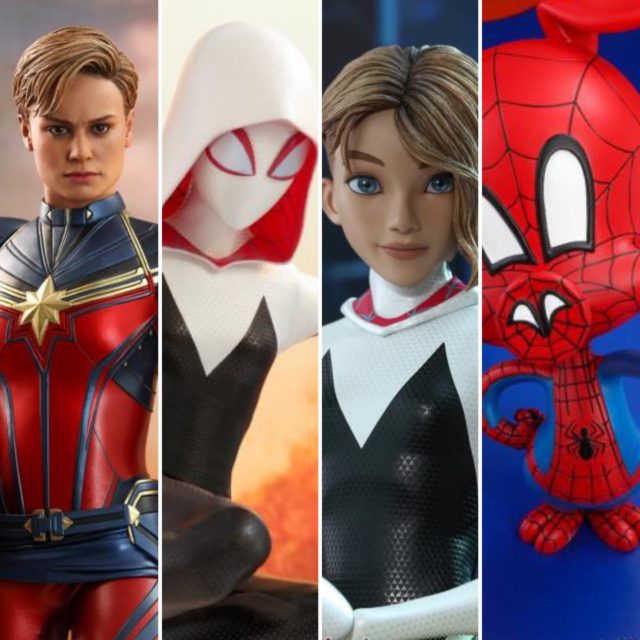 Given the ongoing global pandemic and the release date on the Black Widow movie being bumped back by half a year, I don’t think it’s especially shocking to see that Hot Toys has massively slowed down their solicitations for new products. After all, when people don’t know if they’ll have a job in a few months (or, you know—be alive), it can be tough to sell them big $250 action figures.

Luckily, Hot Toys hasn’t ground to a complete halt, and they unexpectedly revealed and opened pre-orders for two upcoming releases at the end of March: Avengers Endgame Captain Marvel & Spider-Man: Into the Spider-Verse Spider-Gwen (with Spider-Ham)! 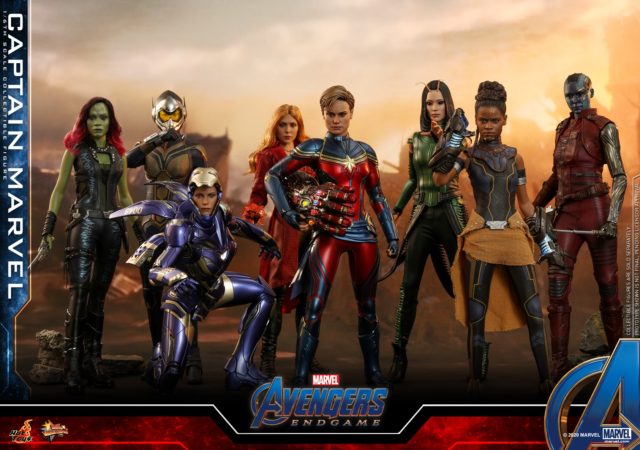 The short-haired Carol Danvers Captain Marvel 1/6 figure is a genuine treat, as there are plenty of fans (like me!) who greatly prefer this short-haired look to the long-haired Carol that we saw in her own movie. 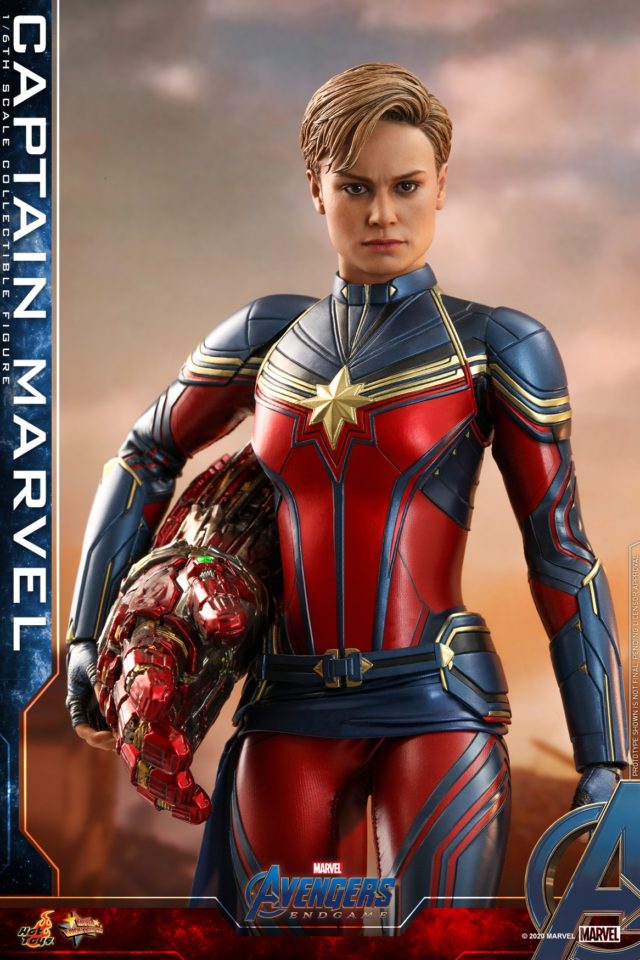 I’ve had that first Hot Toys Captain Marvel figure on order for eons now because I wanted the Goose the Cat accessory, but after seeing the Endgame Carol that I wanted all along, I’m planning to cancel the original figure and just buy Goose off of someone parting out that figure on the aftermarket. 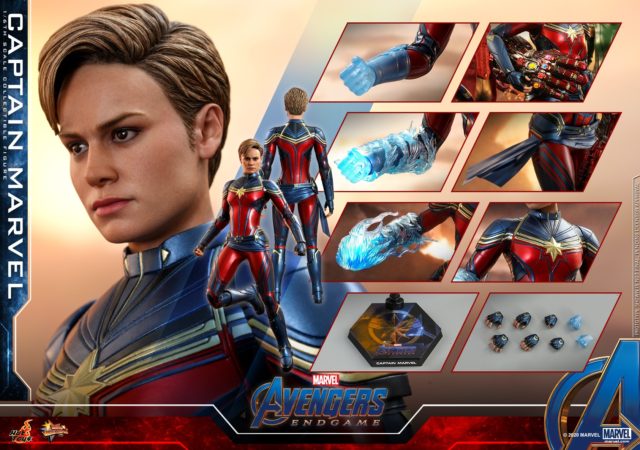 The new Brie Larson portrait on the Endgame Captain Marvel Hot Toys MMS simply blows the likeness of the original figure out of the water. The fierce, determined expression looks spot-on, and the facial sculpt and hair are startlingly accurate. Hot Toys completely nailed this. 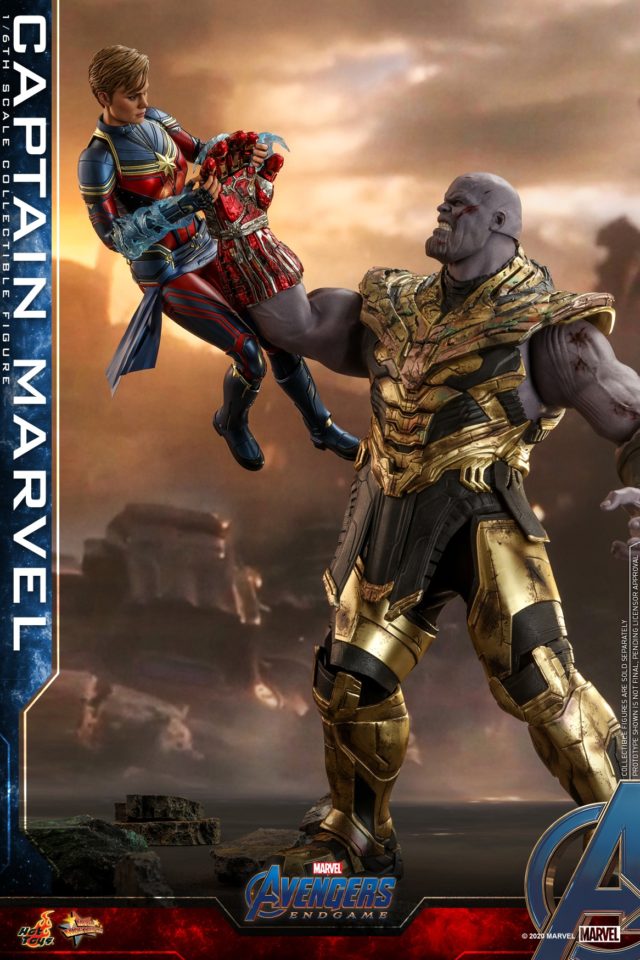 The extra detailing on the Endgame costume also ends up making the standalone movie version look rather plain. To me, this new iteration is just superior all-around (besides not coming with an alien cat, anyway). 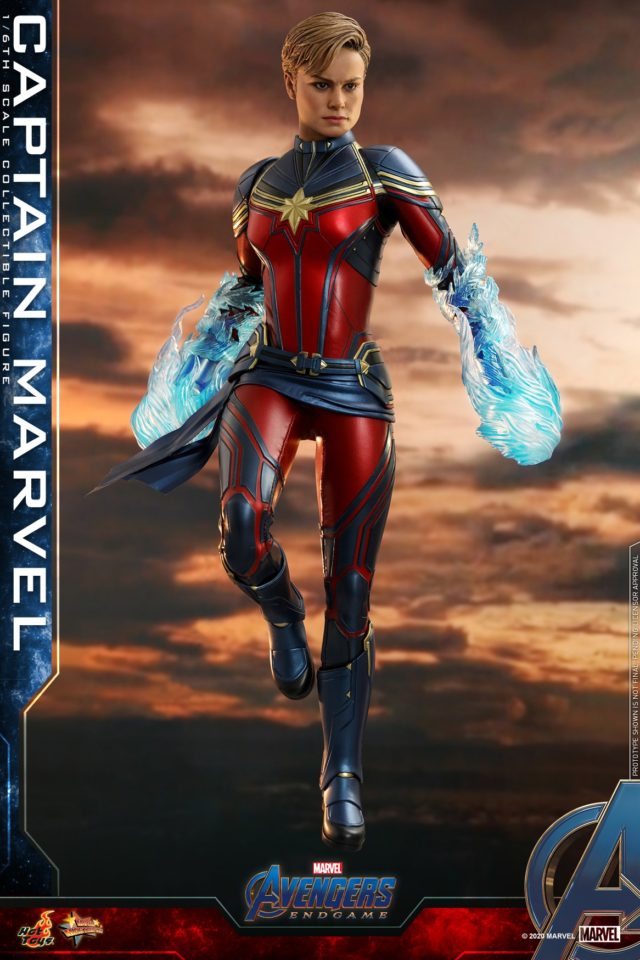 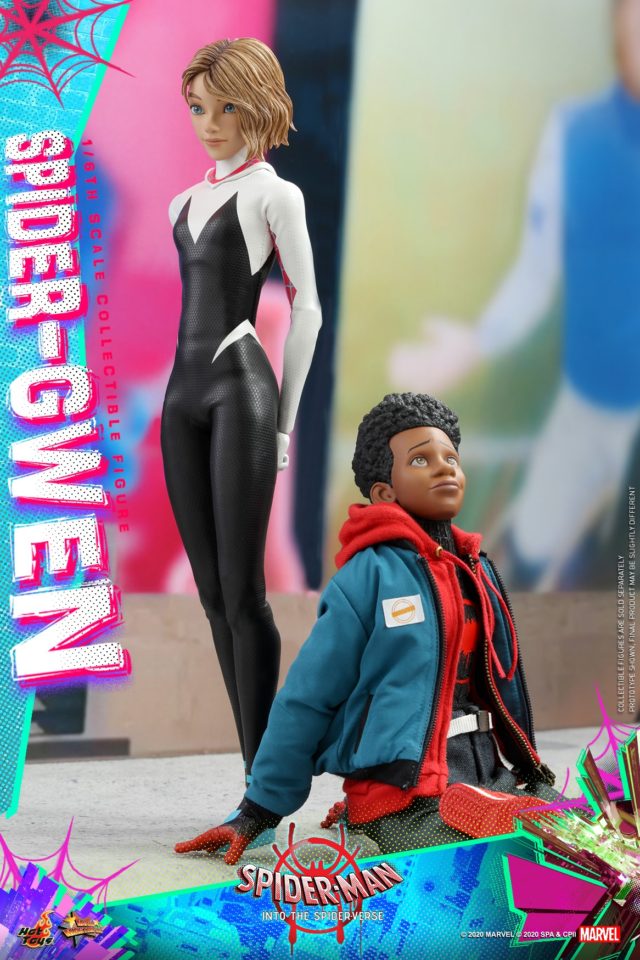 Now, the Spider-Gwen Hot Toys I was a little bit less hyped about at a glance. While I loved the Spider-Man Into The Spider-Verse movie as much as the next guy, I wasn’t sure just how well the animated aesthetic works with a high-end mixed media figure. It worked for Miles Morales because of all the “civilian” bits of his costume, but would it look okay on traditionally costumed Spider-Gwen as well? 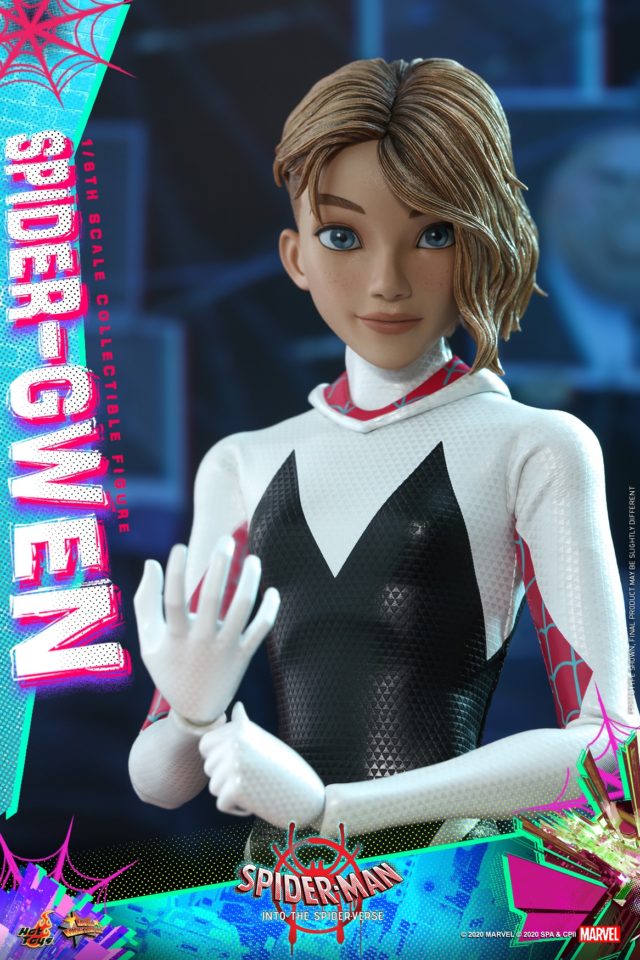 Turns out—it does! With the exception of her dancing-styled shoes, this figure looks good enough to stand in as a 1/6 comic-based Spider-Gwen when displayed masked, while also delivering an incredible animated Gwen Stacy portrait unmasked. This actually works excellently both for comic and cartoon fans! 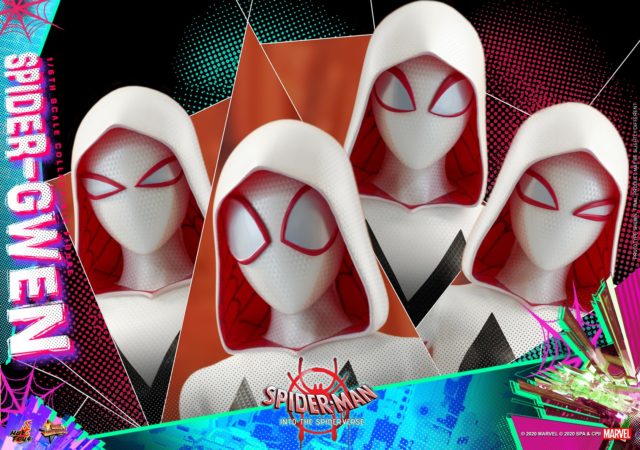 As we’ve seen on a few Spidey figures in the past, Gwen will have interchangeable eyes for her masked head that will give the figure a ton of extra personality. Love this feature! 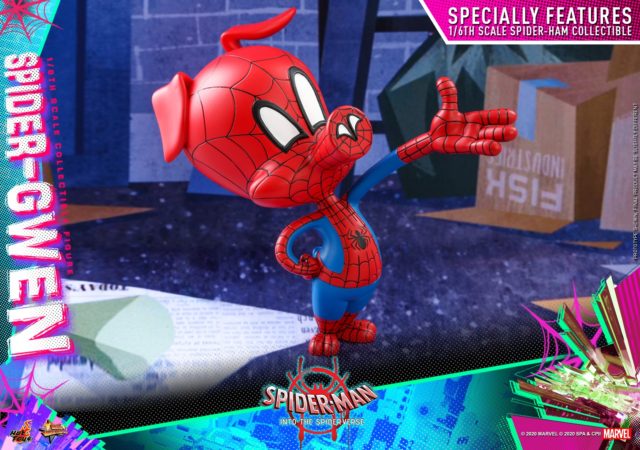 Along with character-specific accessories like a Physics book and a smartphone, Gwen also comes with the best accessory ever: a non-articulated 1:6 Spider-Ham figure! I love the crap out of the fact that we’re getting a sixth scale Spider-Ham, and would get this release just for Peter Porker if it came down to it. 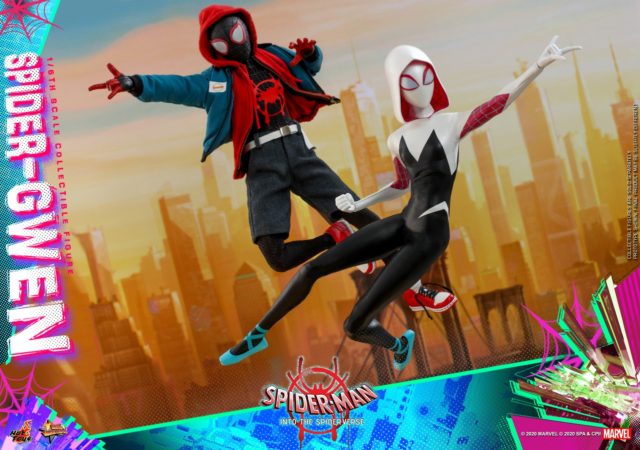 It’s also worth noting that Hot Toys newly-developed this body for the figure so that the proportions would be spot-on, rather than utilizing some other thin female body mold. Thanks, HT! 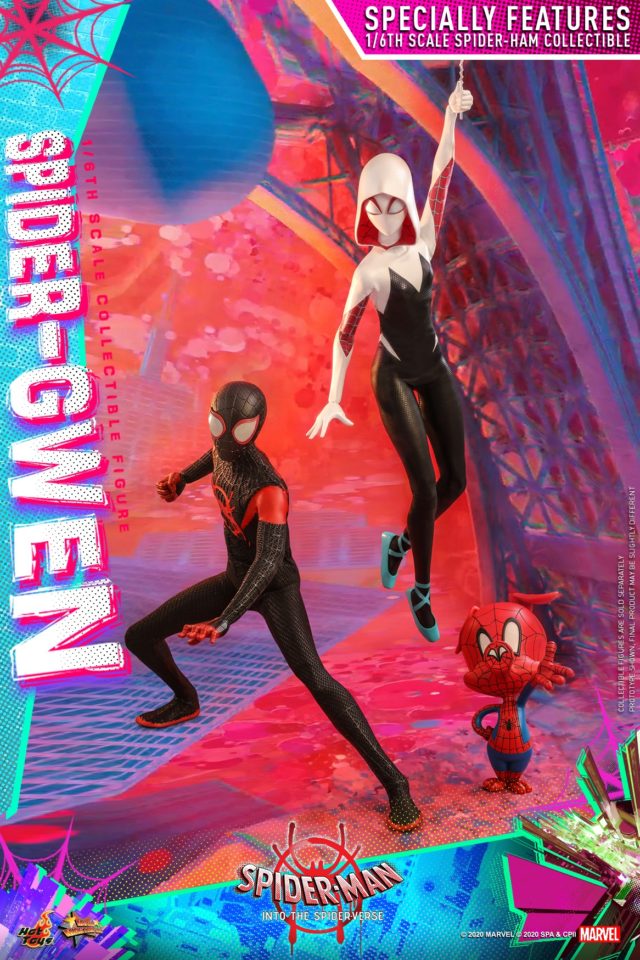 As much as Marvel may want to transition Spider-Gwen’s name to Ghost Spider or Spider-Woman or something else less silly, for now the Spider-Gwen moniker has stuck, and that’s now she’s being marketed here in sixth scale form. That’s the most recognizable name for the character and I want it to sell well, so that’s A-OK by me. 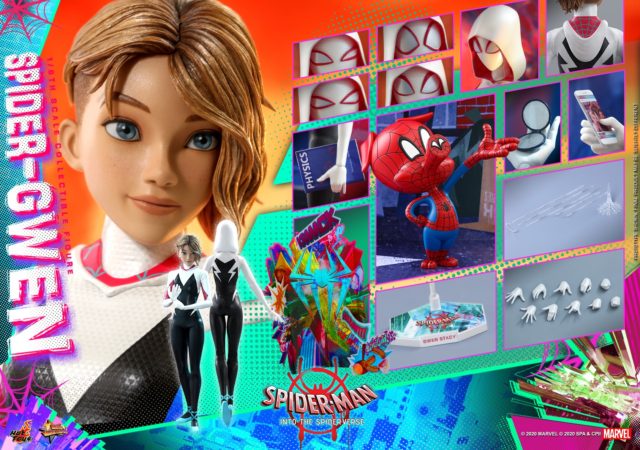 The Hot Toys Avengers Endgame Captain Marvel and Into the Spider-Verse Spider-Gwen 1/6 figures are now up for order, and are estimated to ship out in spring/summer 2021. That’s about a year away, which seems like a long time, but is actually pretty standard for new Hot Toys sixth scale figures. This is the version of Carol Danvers that made me like the character in the MCU, so I’m happy to wait to add her to my collection. And as I don’t foresee 1:6 versions of Gwen or Spider-Ham coming again from anywhere else, I’ll be psyched to have those as well!

Are either of these new femme fatales destined for your shelves, Marvel collectors? How do you feel about the current reduced frequency of new Marvel Hot Toys pre-orders? And would you like to see this slow rate continue, or are you dying for them to blast out pre-orders for new characters and updated versions of characters we haven’t seen in a while like Scarlet Witch and Falcon?