Peter David’s X-Factor 90s run might be the first X-Men spin-off comic book series that I ever truly loved, so to say Hasbro got my attention when they started building this roster in super-articulated form would be an understatement. I was skeptical the team would come to fruition, but with Guido’s arrival this summer, 90s X-Factor is (more ore less) complete! You’ll have to buy every figure in this year’s Marvel Legends X-Force/Deadpool wave to build the Strong Guy Build-A-Figure: is he worth it? 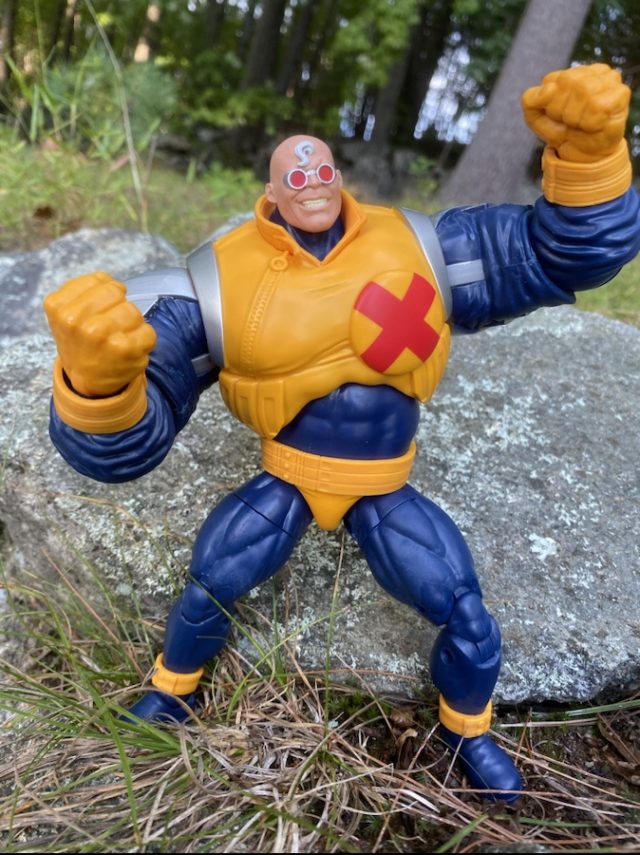 When Hasbro released the first-ever Marvel Legends Multiple Man in 2018, I thought that there was little chance that they’d actually go forward and release the other five members of the classic Peter David X-Factor squad in six inch figure form.

But proving that Hasbro should never be underestimated, they ended up releasing four of the five remaining members of the team (Havok, Polaris, Wolfsbane and Quicksilver) in 2019. Heck, they even included Forge! And now, one year later, the team is complete (although not necessarily in the ideal matching outfits for the ere) with the 2020 Deadpool/X-Force Legends Strong Guy Build-A-Figure! 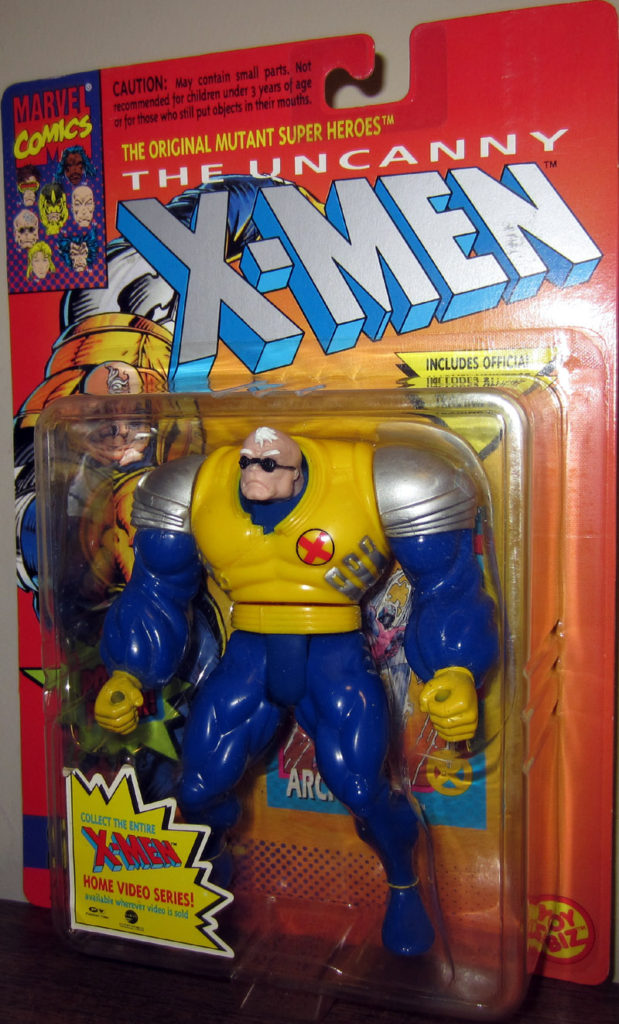 I have pretty fond memories of the Toybiz X-Men 5” series Strong Guy figure I had as a kid, which was a bit undersized, but a fun action figure nonetheless. This Hasbro Guido feels a lot like basically a vastly improved version of that vintage Toybiz toy. 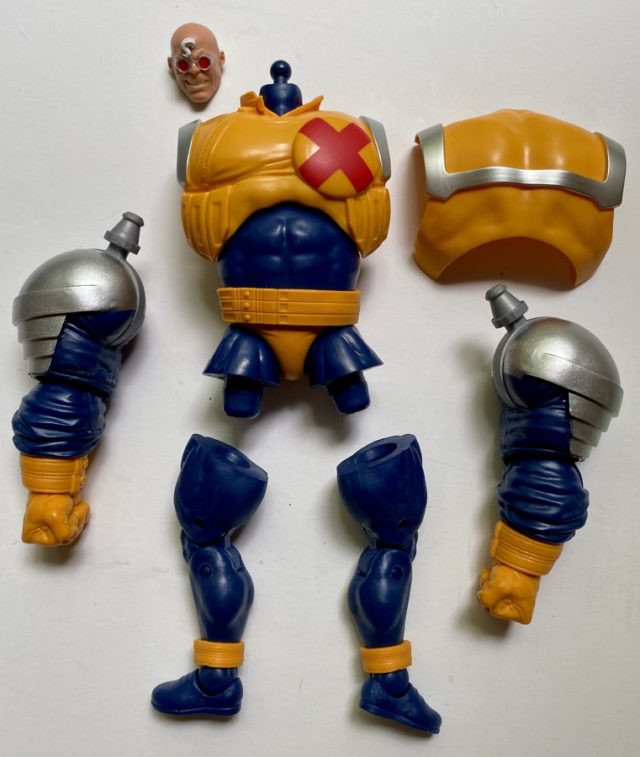 Strong Guy’s character design is a bit weird, as his body has awkward proportions due to being disfigured by all the kinetic energy that he’s permanently absorbed. That means he’s got a humongous torso and itty bitty legs—which Hasbro has replicated nicely for this action figure. The proportions on this figure are wonderfully on-model. Nice work, Hasbro. 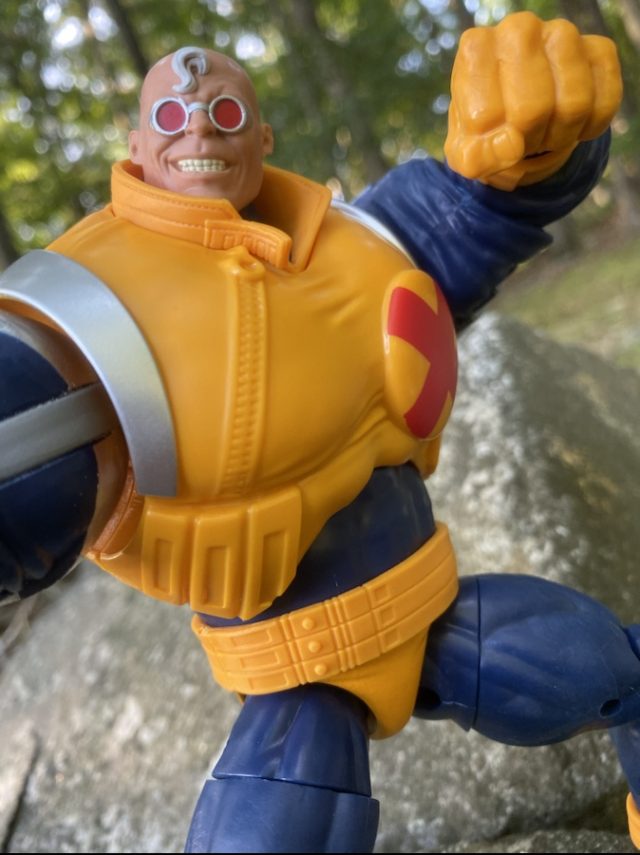 Hasbro also did a killer job on the head sculpt for this figure, which includes Guido’s trademark teethy smile, rift of hair and red-tinted glasses. If this figure had to come with just one portrait, this is the ideal one I’d want. 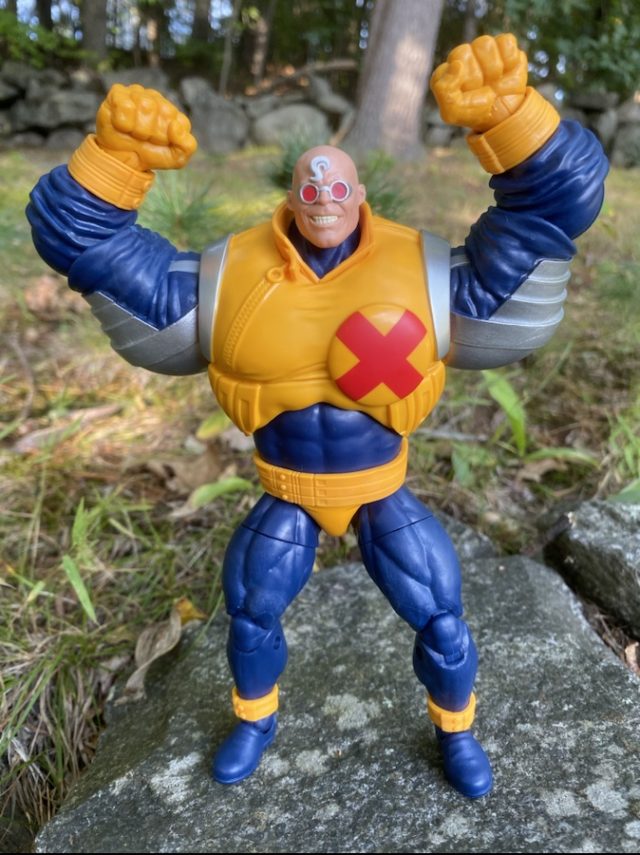 The mold includes an add-on belt and two add-on ankle cuffs, but these all fit so perfectly and tightly that you sort of forget they’re not part of the main mold. Good stuff. The shoulder pads and upper torso jacket are also stand-out parts of the costume. 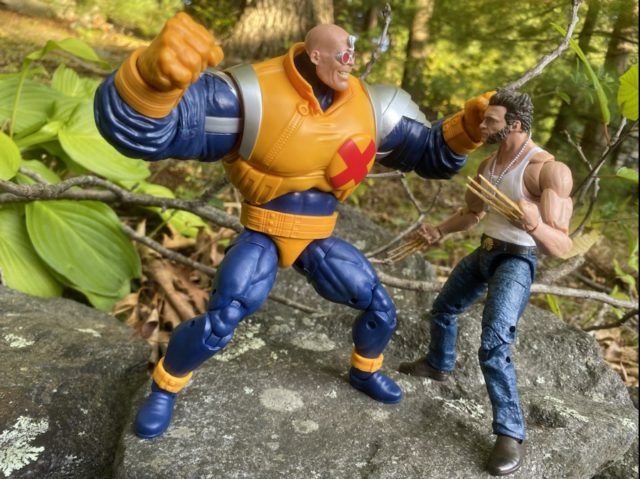 Of course, few figures are perfect in this world—and the Build-A-Figure Strong Guy isn’t one of them. I’m not too troubled by the unpainted zipper on the jacket—it’s oftentimes yellow in the comics anyway—but the main thing that really bugs me about this figure is the total lack of any kind of paint wash anywhere on the toy. 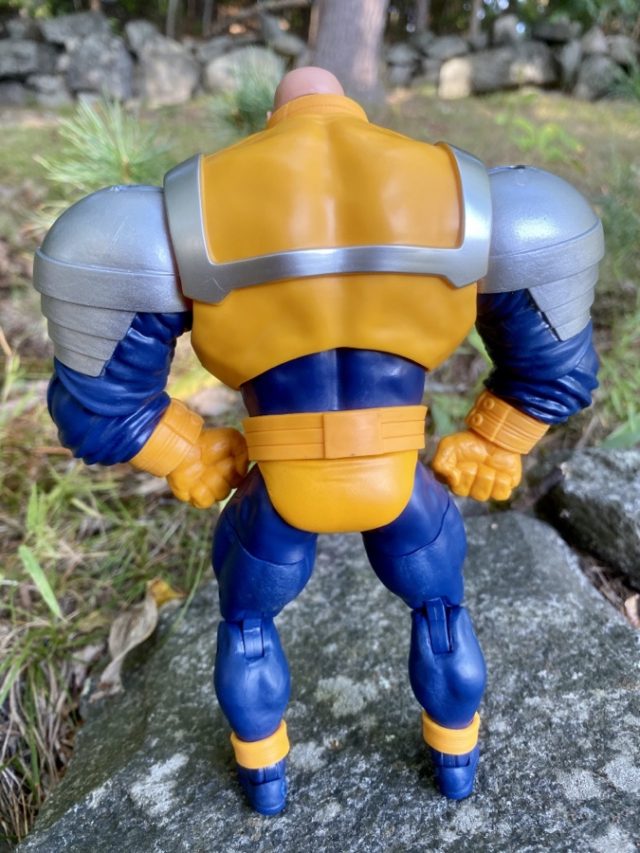 Without a paint wash anywhere on the bulky yellow upper body, the figure really does have a bit of an unfinished look to it, with the bright yellow feeling more “toy-ish” than I would prefer. 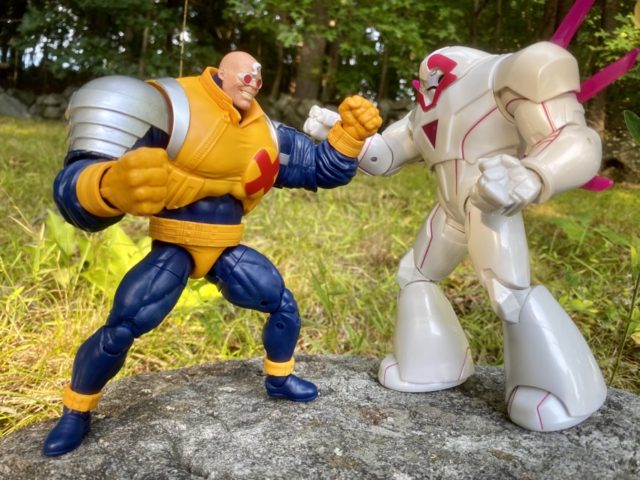 I’m also a mite bummed by the lack of any kind of interchangeable parts. As a super-strong brawler, it would have been nice to get some open hands for Strong Guy to be able to hold up and manhandle other figures with. 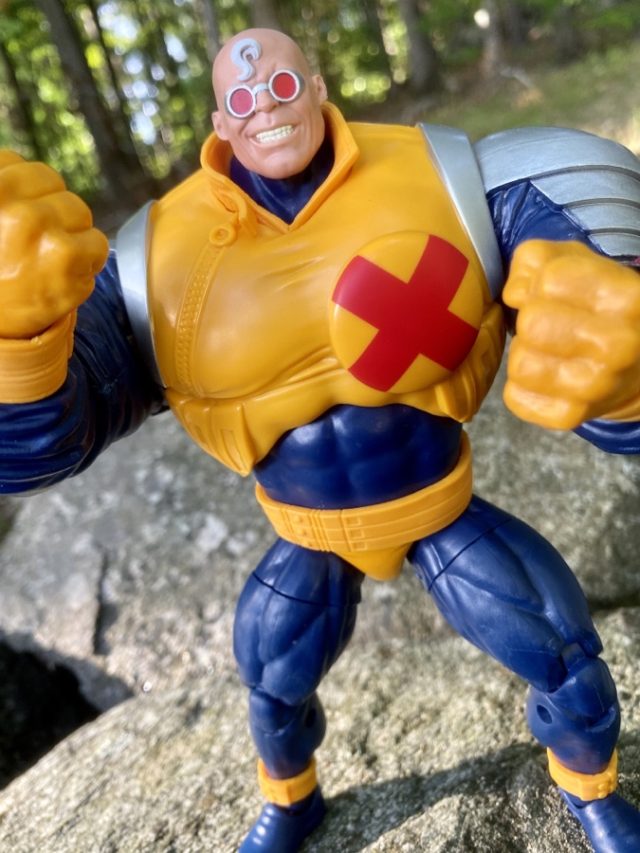 Additionally, as much as I like the smiling head, a vintage-inspired “angry” head—or even an open-mouthed yelling head—would have gone a long way in creating more display options and possibilities. 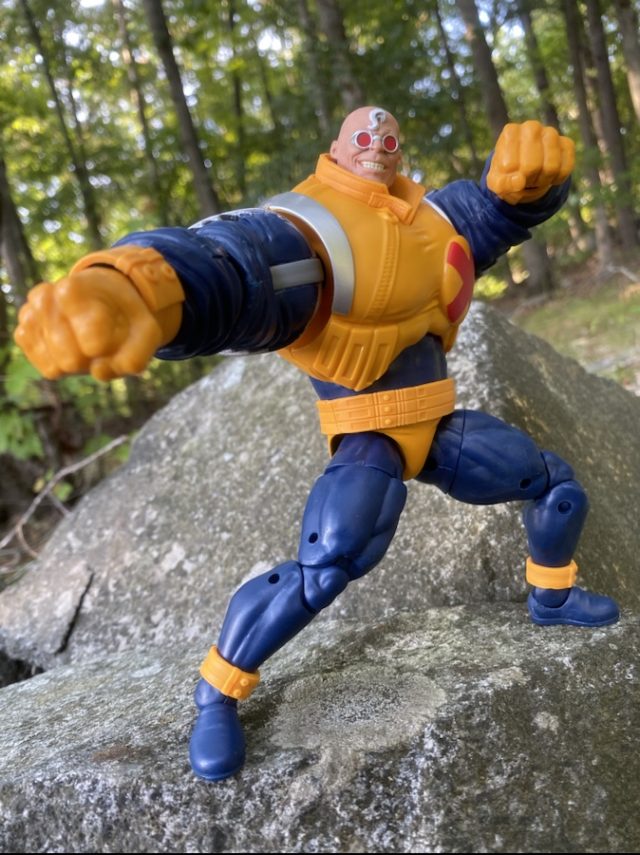 As far as articulation goes, it’s solid given the limitations of the character design, but not quite at the usual level of Marvel Legends greatness. Ball-jointed elbows are never as good as double-hinged ones, there’s no biceps swivels or swivel waist, and the head articulation is restricted by the collar. The lower body articulation is also limited in practicality by what can be accomplished while still holding up the bulky upper body stably. 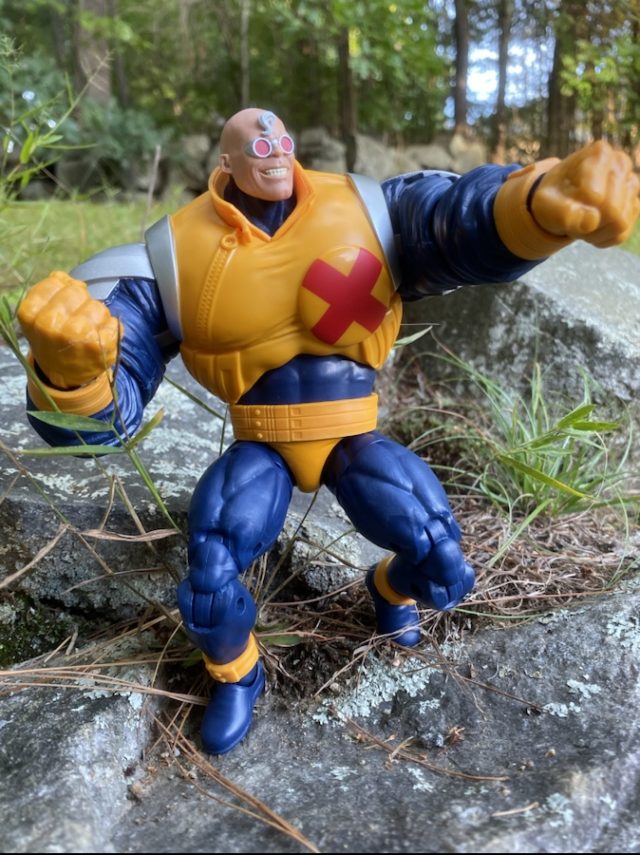 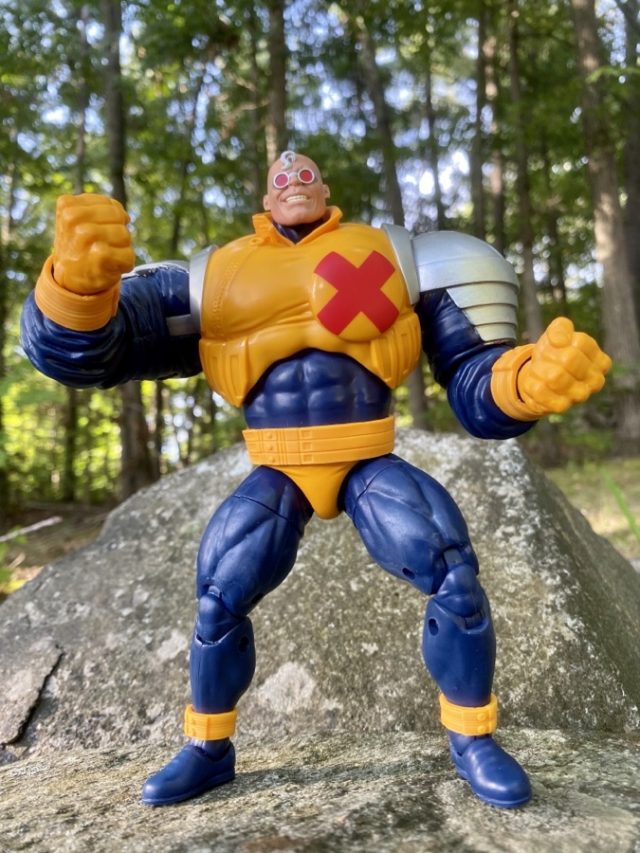 Overall: While I’d be exuberant if I could say that the Strong Guy BAF is the best Build-A-Figure ever, that’s not quite true—but he is still damn good. On the plus side, the portrait and proportions are bang-on, and this figure has the size and bulk to really create a nice constraint on the shelf with his X-Factor teammates.

But on the downside, the lack of any kind of paint wash at all leaves the bright yellow plastic looking a bit cheap and toy-like, and I think an alternate (angry) head and some open hands would have given this figure a lot more options.

Overall, I’m thrilled to finally have a proper 6” Guide Carosella action figure for my shelf—and is Hasbro decides to reissue an upgrade of this figure in a couple years with more paint deco and a new head, I’ll have no qualms about buying it again.