Peter David’s X-Factor run in the 90s is one of the touchstone comic book series of my childhood, but also featured a team roster I never dared dream we’d see released in full as action figures. But we found out that Hasbro’s current golden age of Marvel Legends would continue to deliver dreams in a huge way this fall, and the shared exclusive Marvel Legends Havok & Polaris two-pack is now (free) shipping! Were these 6” figures of 90s X-Factor’s power couple worth waiting two decades for? 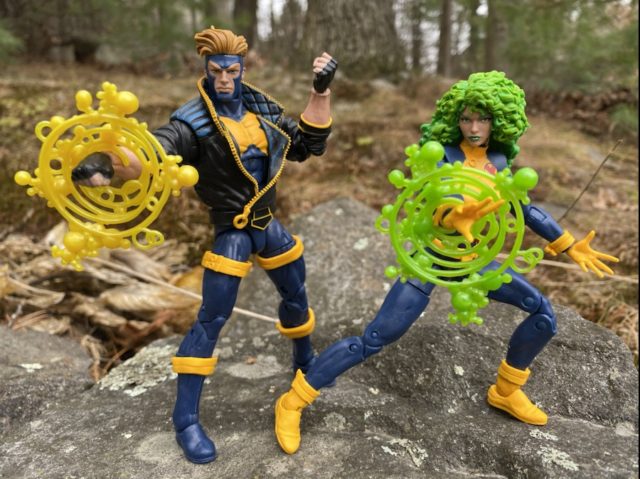 If you asked me for my 10 favorite comic book runs of all-time, Peter David on X-Factor would definitely be on the list. So am I going to be a wee bit biased in this review…? Possibly—but I may also be a bit harsh, since I’ve been wanting these 90s Polaris and Havok six inch figures for a long, long time.

Toybiz gave us 5” versions of both these characters in these outfits decades ago—which I adored at the time, but those figures can’t really stand up to today’s standards. Has Hasbro managed to raise the bar with their own takes on Peter David Havok and Polaris…?

First up, let me applaud Hasbro on this wonderfully awesome packaging. I love the bright 90s-inspired blue, and including the 90s trading card art for Alex and Lorna on the back of the box is an absolute treat. 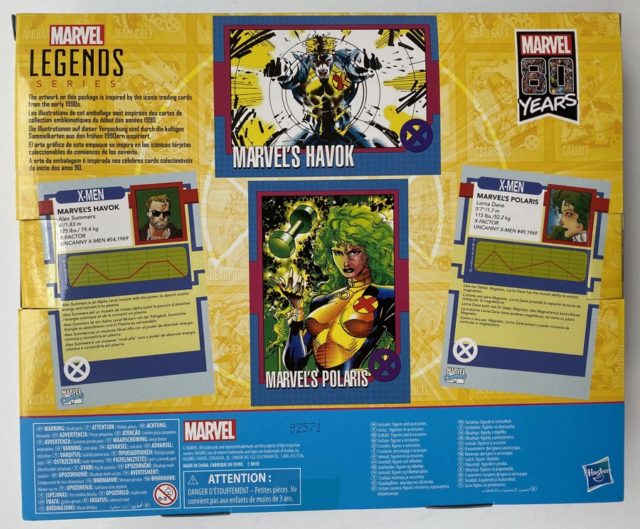 I’m not an in-box collector myself, but this is some of my favorite packaging Hasbro has done in ages. The colors and artwork are just gorgeous all over, and I frankly think this packaging blows the rest of the 80 Years of Marvel Legends packaging out of the water. Bravo. 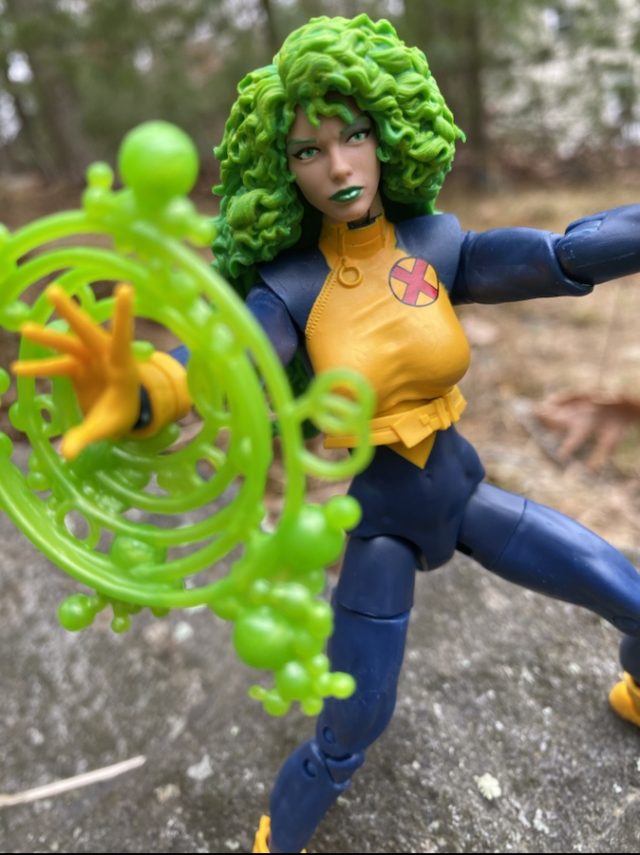 At a glance, the figures themselves are pretty neat too. If you read the X-Factor Peter David run of this era (and if you haven’t, shame on you), then the authenticity of these costumes will be instantly recognizable. While the Lorna Dane portrait on the Polaris figure might look a bit terrifying to an outsider, I think Hasbro has really nailed the way Lorna looked in the illustrations of these classic comic books. 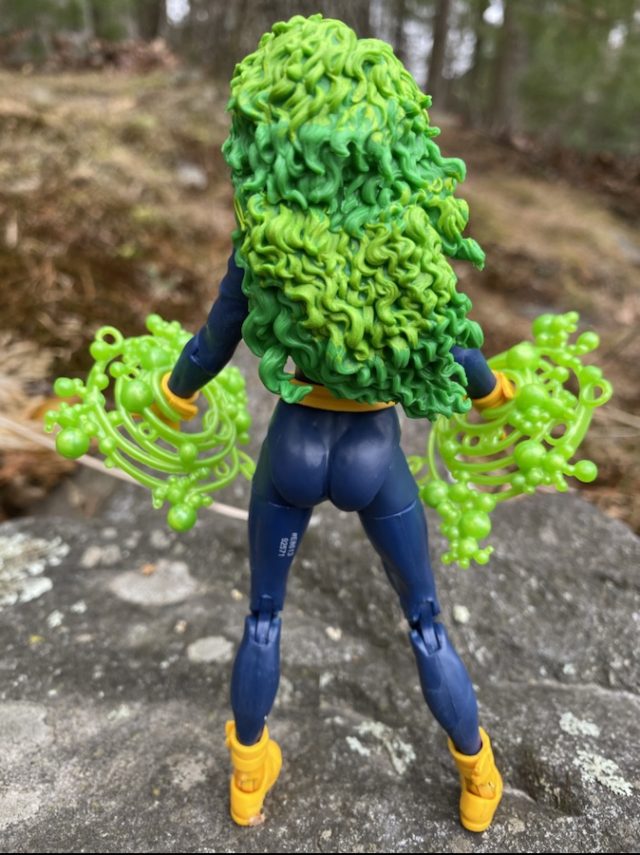 The two-tone neon green hair on Polaris looks killer (although it does make balancing her difficult), and it’s a real shame that I’m never going to have her displayed in such a way that I can see all of this gorgeous green hair. 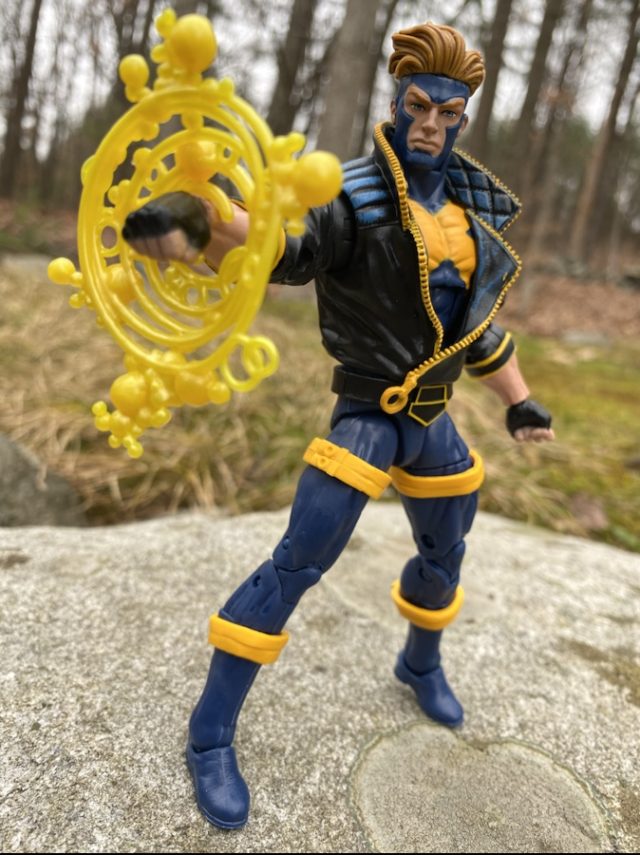 This is my favorite costume ever for Havok by a large margin—Alex Summers never looked so good before or since. Havok’s huge hair coming out of his mask doesn’t make a lot of sense in retrospect, but it puts a huge grin on my face today nonetheless. 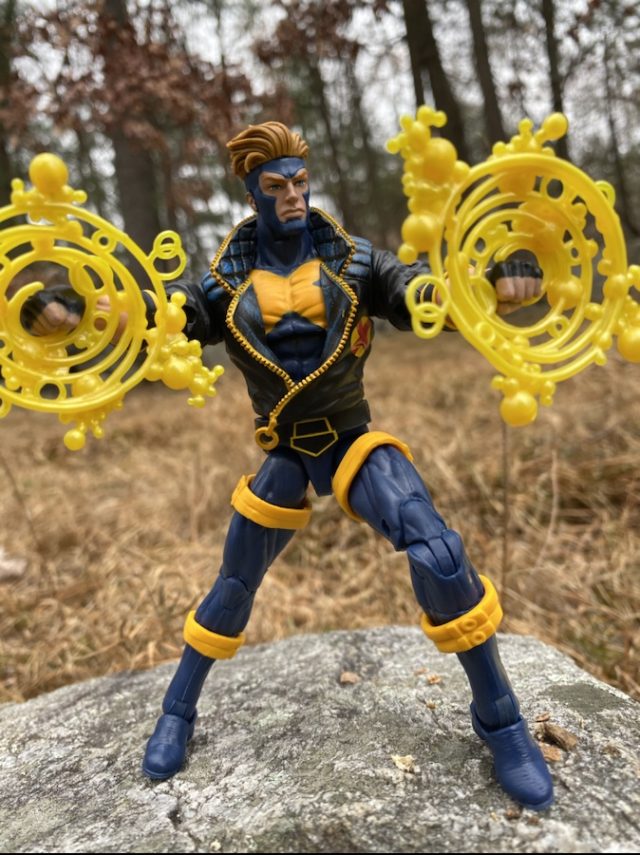 The upper body jacket mold looks fantastic, and I applaud Hasbro on adding the yellow paid for the zippers and the blue highlights on the shoulders and interior. The extra paint deco absolutely adds a certain visual flair and fun to the look of this guy. The ridiculously oversized belt (which fits snugly) is just the best. 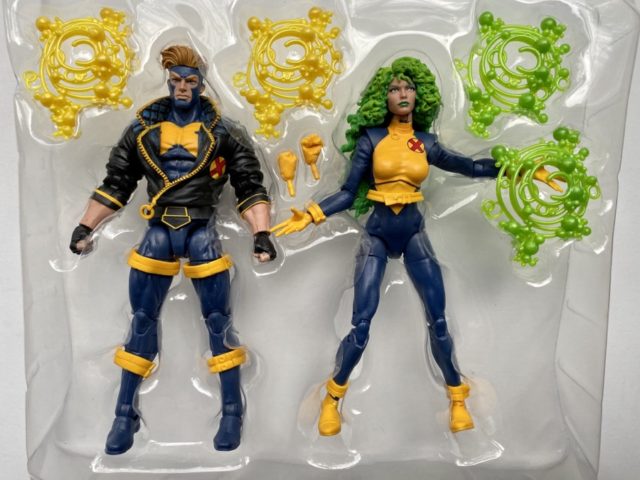 We get six accessories this set, and four of them are the same energy effects pieces in two different colors (yellow for Havok’s comic energy and green for Polaris’s magnetic energy). It’s a little weird to have two sets of different types of powers represented by the same accessory mold in one pack, but hey—Havok and Polaris we’re sharing plenty of other things with each other in this era, so why not effects parts, right…? 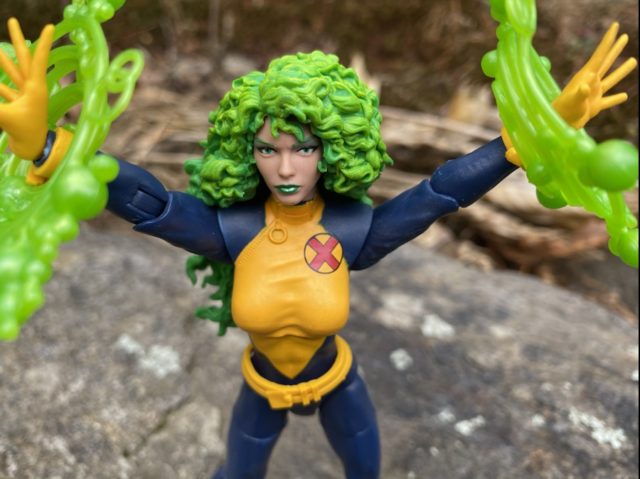 The effects don’t exactly fit snugly onto either figure’s hands or wrists, but it’s not too difficult to get them stuck on there and into a power-displaying pose. These effects were literally made for the 2016 X-Men Legends Havok figure, and they look as cool here as they did back then three years ago.

We’ve seen these same accessories like a billion times now, but they legit are fully appropriate and look terrific with both of these 6” figures. It’s tough to criticize something as ideal as these effects! 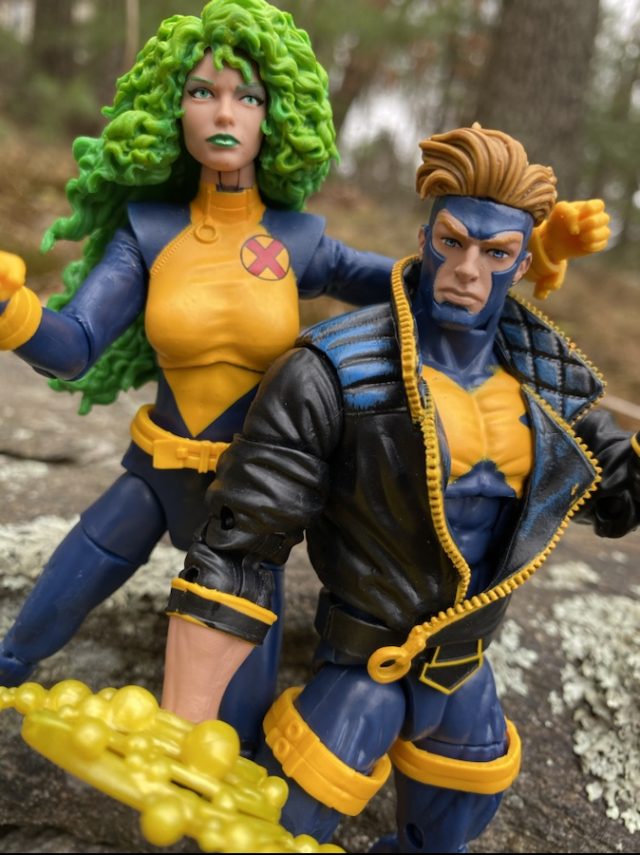 In addition to the four energy effects pieces, Lorna also gets a pair of alternate fist hands. It seems kinda strange for Polaris to have fists, but I guess if she wants to throw down in a fist-fight with the Juggernaut, now she can…? But seriously—I’ll never complain about optional extra hands. If they’re what Hasbro could cost in, I’m happy to have them. 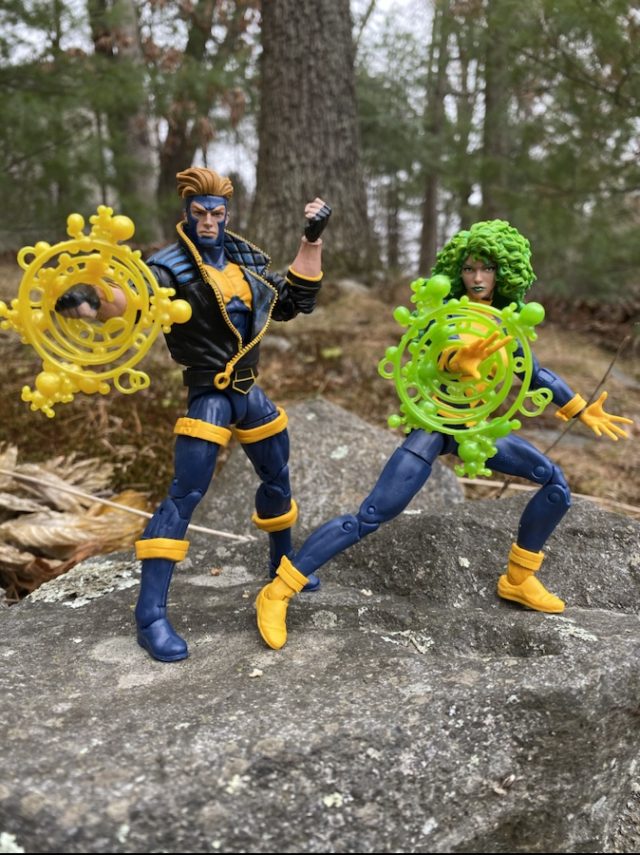 Neither Havok nor Polaris are ninjas or expert hand-to-hand combatants, so the standard ML articulation schemes are fine for both. Both have double-jointed knees and ankle rockers, plus swivel thighs, swivel-hinge wrists, ball hips and swivel-hinge neck/shoulders. Havok has an ab crunch, but the jacket add-on piece makes it unusable. 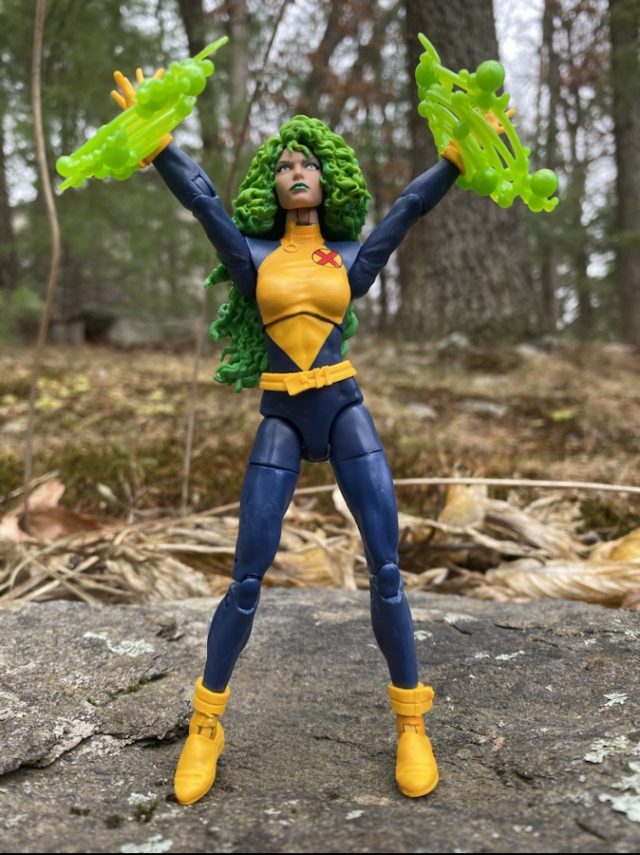 Polaris lacks swivel boots/biceps/waist and only has ball-jointed elbows, but I think we’ve sadly all come to accept those shortcomings by now in female Hasbro Marvel Legends action figures. I would dearly love to see the Legends women molds updated soon. 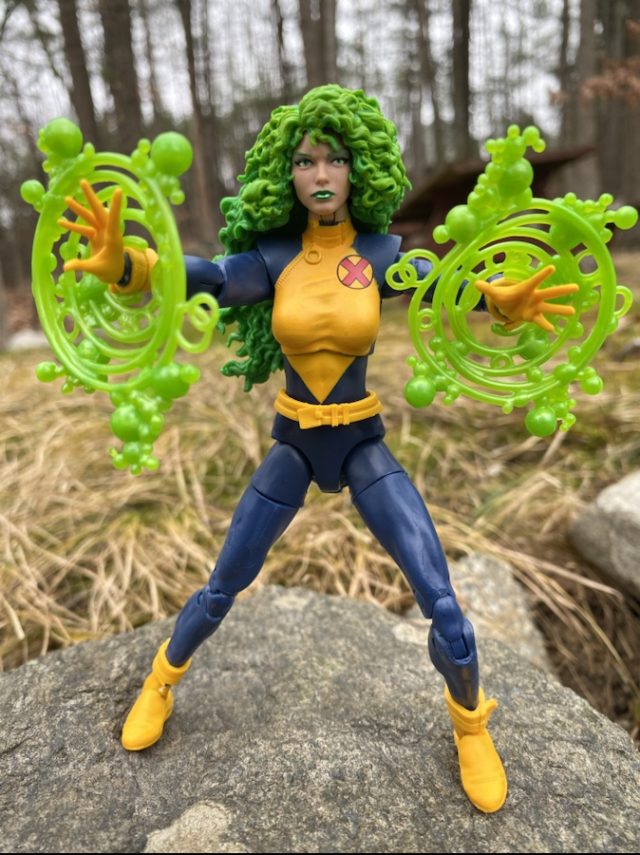 Into every review, a little rain must fall, though—and while I do totally dig these Marvel Legends X-Factor action figures, that doesn’t mean they’re perfect. Quality-control is an issue on both figures (although I am happy to say there’s no rubbery plastic or stuck/brittle joints on either, and I’m not at all worried about breaking limbs off this time). 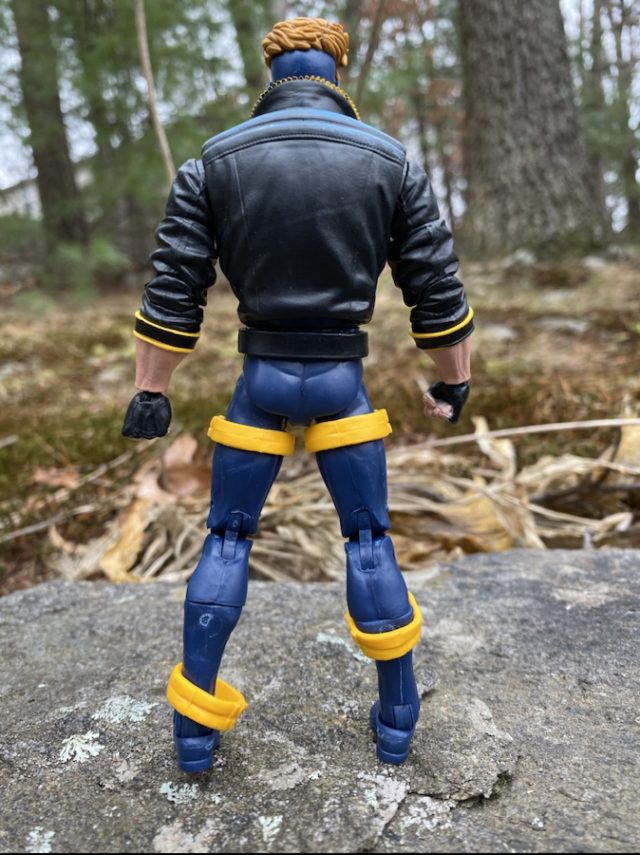 Havok has the same obnoxious as hell add-on loops on his legs as Jim Lee Cyclops did in 2017, and they’re frankly driving me up the wall. You might notice them rotated differently or flopping off entirely in a lot of my photos, and that’s because they refused to lock into place no matter how I turned them, so I eventually just gave up on getting them to stay properly. 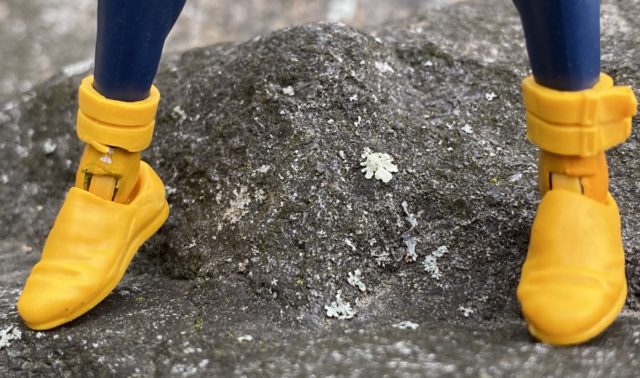 ML Polaris has problems of her own, which an ultra-floppy belt that cannot be locked into place, as well as a boot cuff that came pre-broken on mine with white paint showing through where the yellow is scraped off. Disappointing. 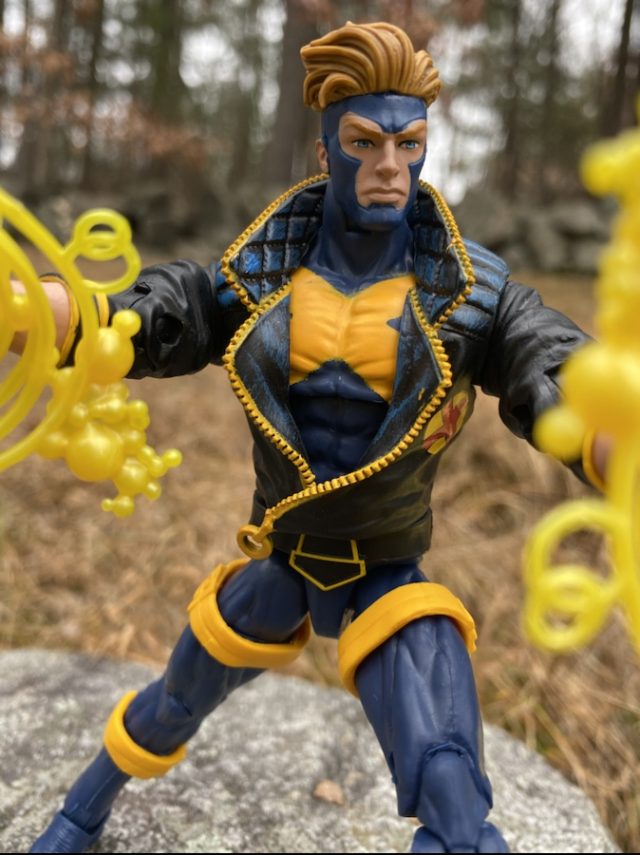 As is often the case with these blue and yellow X-Men costumes, there’s ample areas where the colors bleed into each other on both figures, and it does look a little fuzzy and sloppy. I expect to see some imperfections with these colors, but in this case I’m going to do an exchange because I’m not pleased with the paints or Lorna’s broken boot cuff. 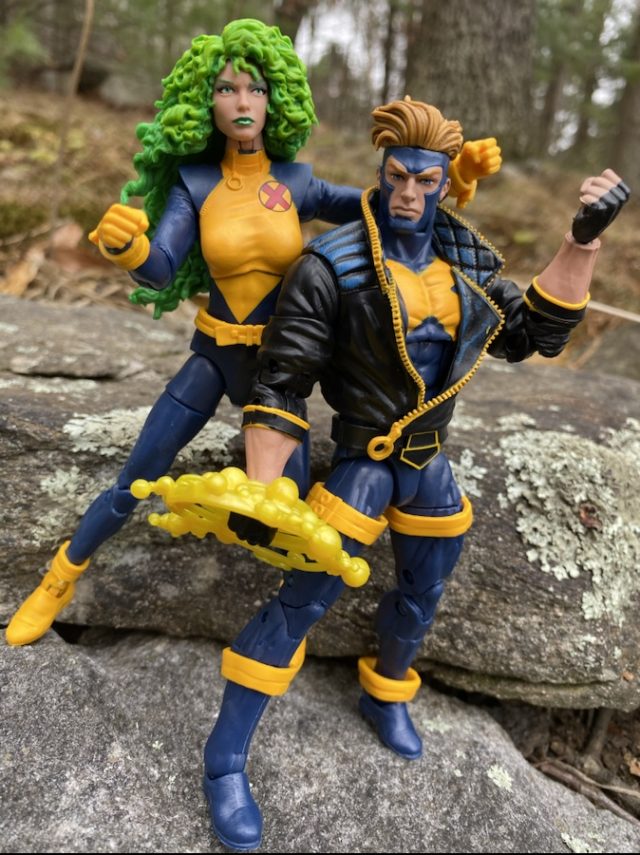 Overall: As far as character selection and overall design choices go, this set is an A+++ in my book. A ton of work went into making these X-Men Legends Havok and Polaris figures feel authentic to the source material, and they absolutely have a 1990s artwork feel to them. The retro packaging looks equally fun and outstanding. Love it.

Unfortunately, I’m not as cheery about the quality of the paint—which has tons of little sloppy errors and inconsistencies—and the overall quality of the add-on bits, which came loose and wobbly (and even broken in the case of Polaris’s one boot cuff).

I love these characters in these costumes and am thrilled with the design work for these Marvel Legends, but I’m disappointed in the QC as far as paint and add-on costume bits go. I’m absolutely thrilled to have these, but I’ll be trading my set in for another with hopefully better paint and fewer issues with the add-ons.