Although I reviewed all seven figures in the actual Age of Apocalypse Marvel Legends X-Men wave of 6″ figures, there was one last figure in the overall theme I was waiting on to review. And while I never managed to track one down at retail, the X-Men Legends Apocalypse Age of Apocalypse deluxe boxed figure I ordered from Amazon arrived this week. This may be the last AOA figure that we get from Hasbro for a while (but hopefully not forever)–does this world-conquering En Sabah Nur action figure disappoint? 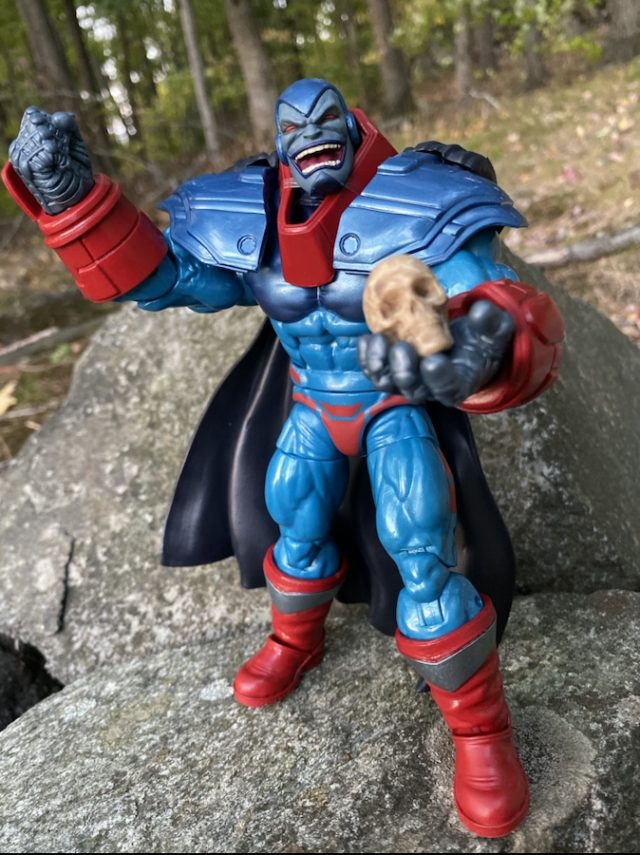 This year’s X-Men Age of Apocalypse Marvel Legends series was a dream come true for me, and I am devastated to see the wave seemingly faring poorly at retail (and shockingly being clearanced out already at many Target stores).

The prospect of never getting an AOA Magneto, Cyclops, Rogue, Sinister, Sabretooth or Gambit from Hasbro is definitely depressing. But if we were only going to get one more character (for now), it really needed to be (and is) Apocalypse himself. How’d he turn out? 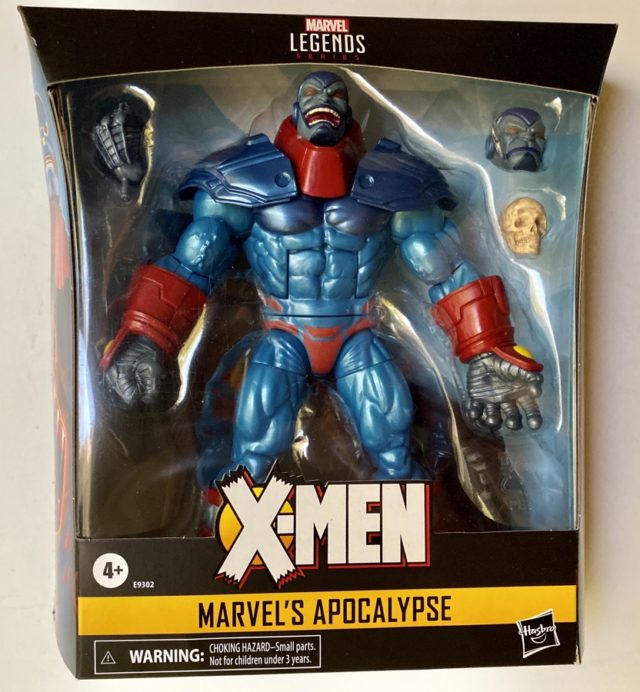 First off, I have to give humongous props to Hasbro on managing to recycle the tooling from the 2018 Apocalypse BAF as a base and supplementing it with add-on pieces to create a shockingly accurate AOA version of the character. 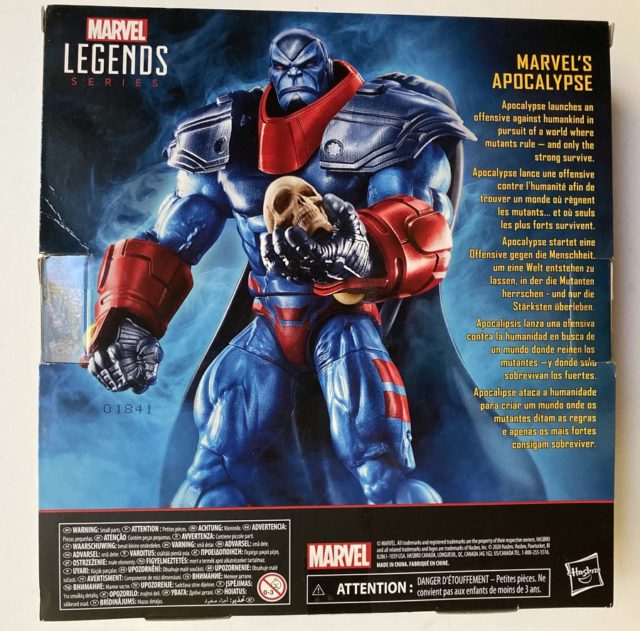 I wouldn’t have thought it was possible, but all those extra pieces added on legit make this look and feel like an authentic take on the alternate universe design. 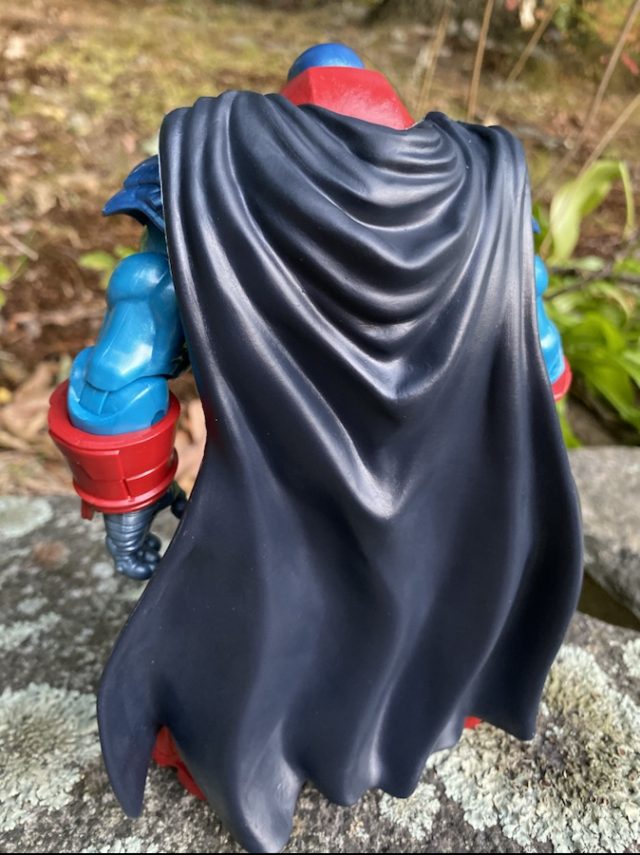 So what all is different from Hasbro’s original Apocalypse Build-A-Figure? Let’s run down the list (and be sure to check out my archived review if you need a refresher on the 2018 BAF iteration):

That is a lot of new pieces added on to make this feel unique, and I applaud Hasbro to going to all this effort. I was skeptical, but they made it work. 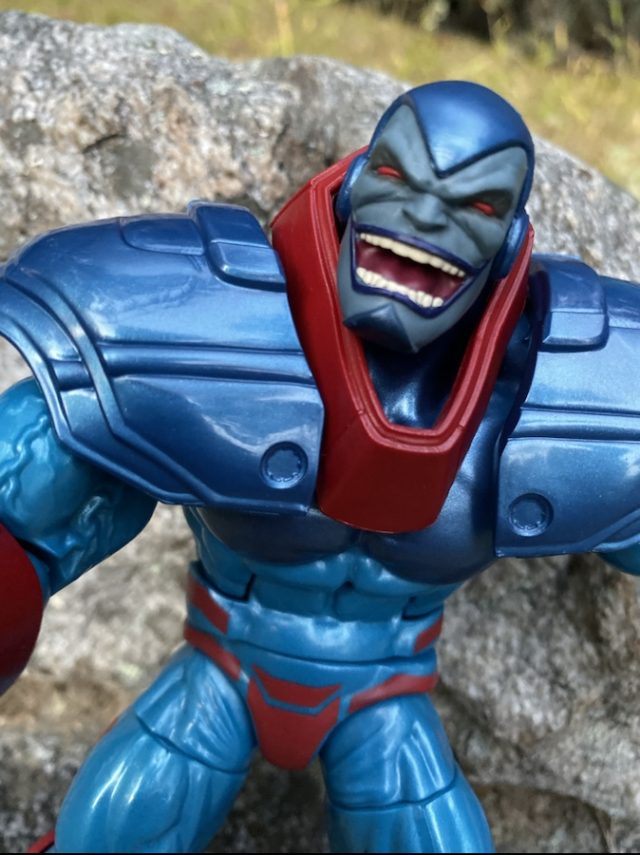 While the original Apocalypse BAF had one viciously angry head sculpt, we get two equally awesome new heads with this AOA Apocalypse: a closed-mouth scowling portrait and a maniacally laughing head. I actually love both these heads, and I’m not sure I can pick a preference between them. The laughing head is particularly impressive with painted teeth, eyes, lips, tongue and inner mouth. Both these portraits are ‘A+’ evil stuff. 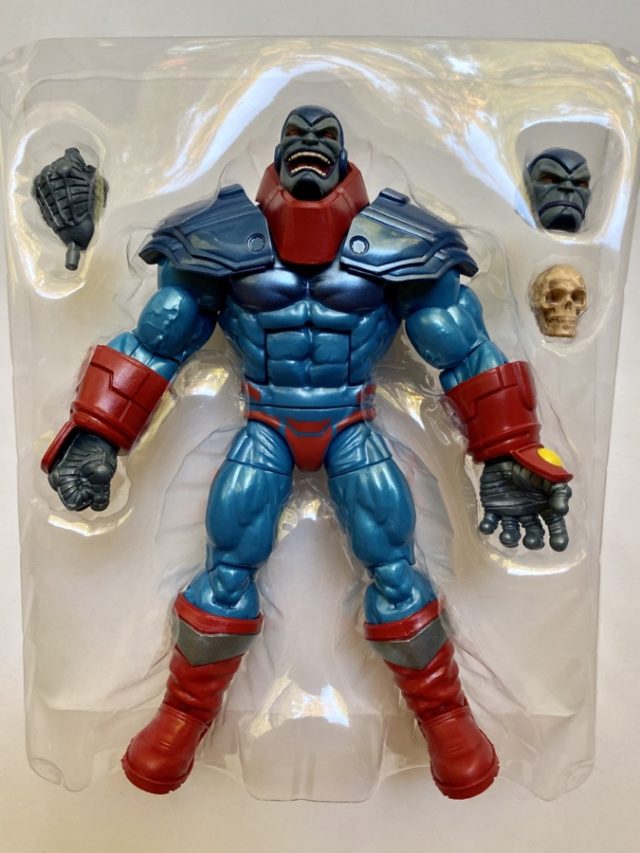 Along with the new heads, there’s also a new open left hand for holding stuff, and a new skull for it to hold. Apocalypse looks diabolically evil holding a human skull aloft with his merry, laughing head. Sweet new accessories. 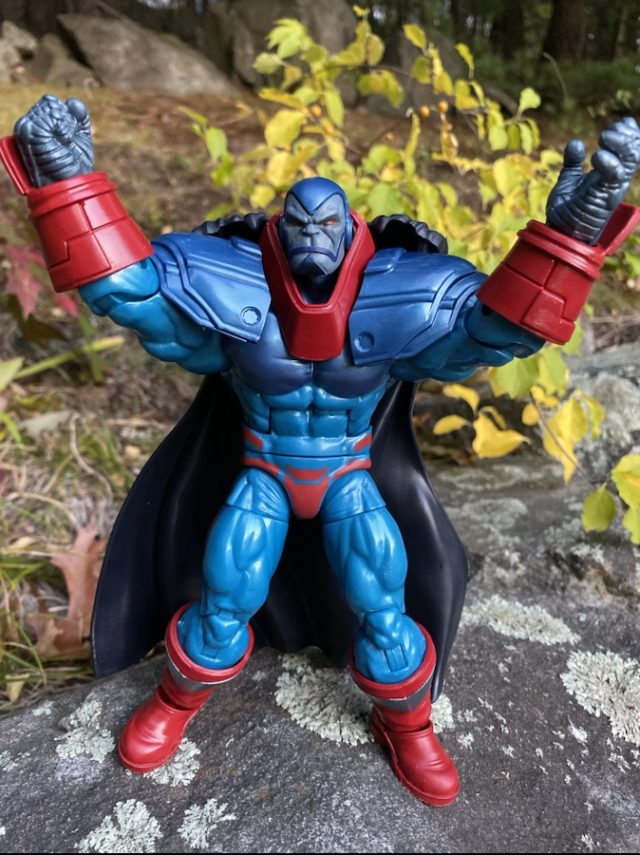 The various colors and shades of blue on this figure have a perfect sheen to them and are dead-on accurate to how I remember them from the vintage comic books. The yellow on the forearm protectors pops wonderfully, and all the colors are precisely what I wanted. The deco itself is also neat and cleanly applied. Perfection. 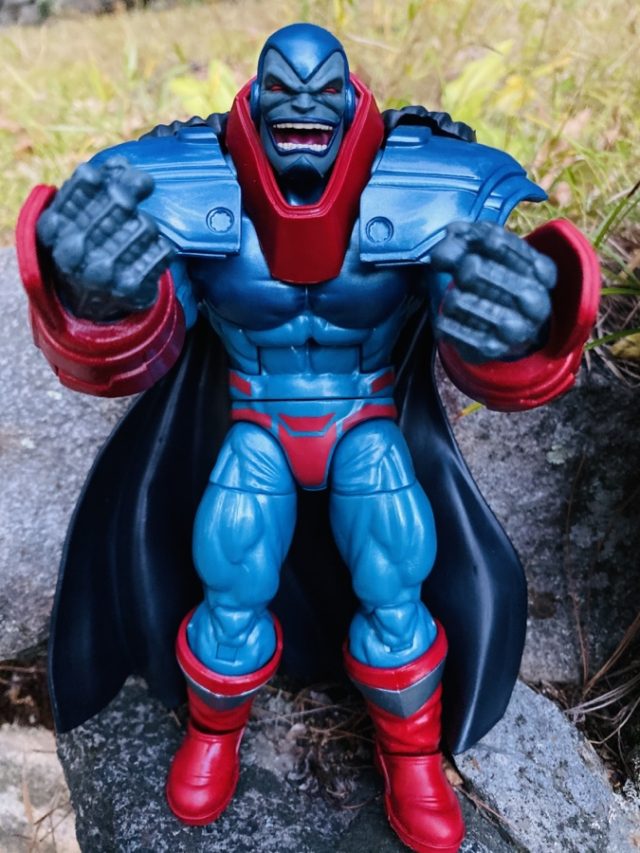 From a purely aesthetic standpoint, this figure is an overwhelming victory. But if you want to play with him, things become a little less impressive. While the boots and forearm protects are perfect new pieces, the add-ons from the shoulders and up are more problematic. 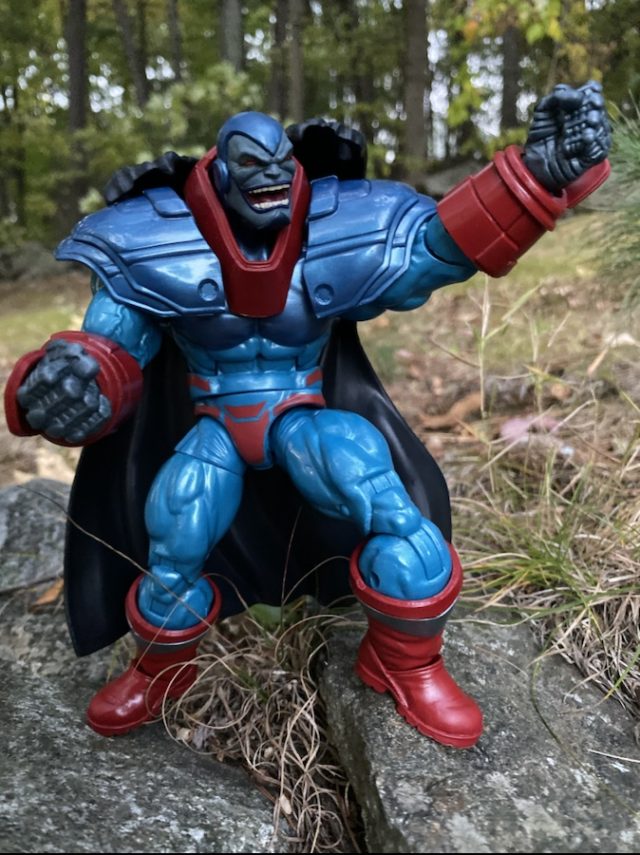 The thing about this toy that evokes more rage from me than I would have thought imaginable is AOA Apocalypse’s cape. It’s a nice flowing sculpt, but it is heavy–and unfortunately, the pegs are soft and weak, resulting in them popping out of the shoulder pads basically every time I go to pose or move him. It is infuriating, and led to me taking the cape off altogether for some of my review photos (something I never wanted to do). 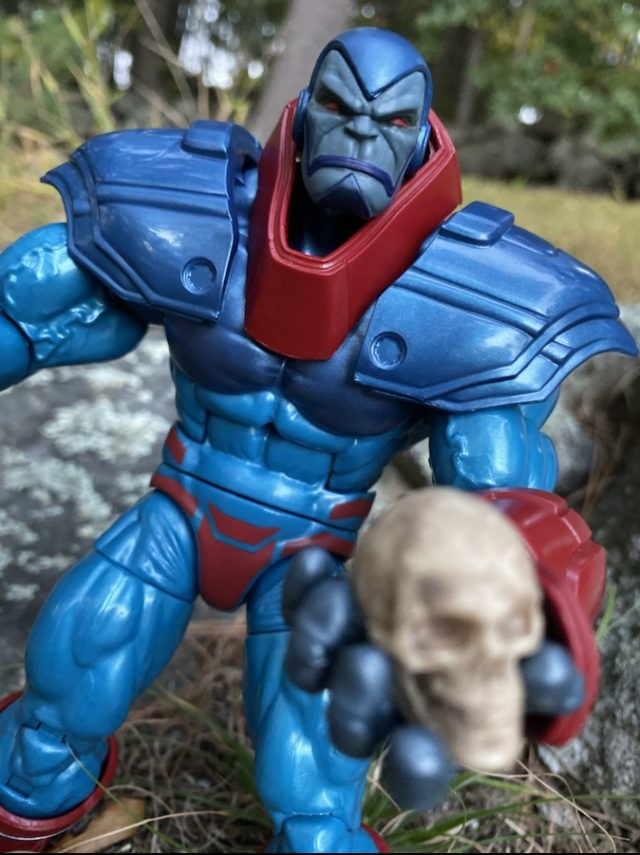 The collar piece is frustrating to a lesser extent–if you move his big A’s shoulder armor too high, they’ll force his collar piece pegs to pop out and it’s an annoyance getting them back in too. The collar armor still holds way better than the cape, but I’d be lying if I said I wasn’t irritated about it. 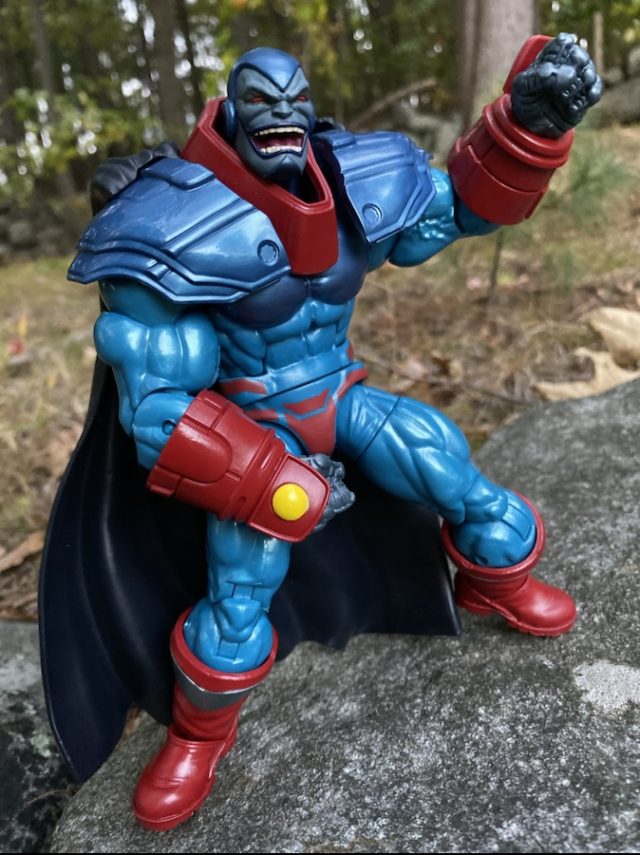 The issues with having to be careful moving Apocalypse’s shoulders is further complicated by the single-hinged elbow joints with limited range of motion (due to the forearm armor) and the lack of hinges on Apocalypse’s fists. 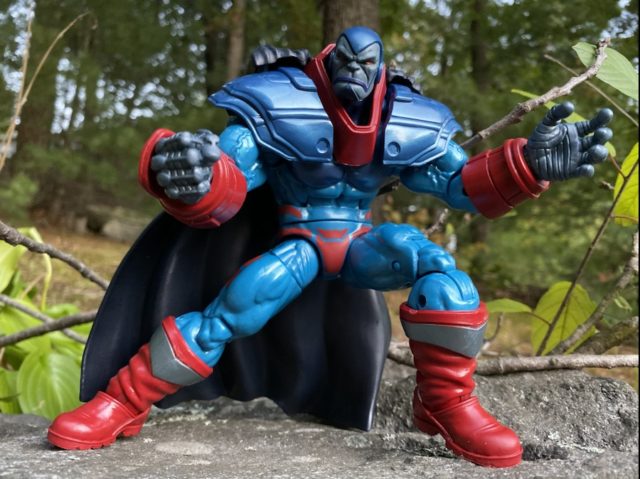 Overall: This is a painstakingly difficult figure to attach an overall review score to, because this X-Men Legends AOA Apocalypse figure is going to look amazing on my shelf and a real visual highlight of the Hasbro X-Men Age of Apocalypse series lineup.

That said–when I actually want to pose or move this figure, the add-on collar and especially the cape are constantly fighting me and popping off and out of place. Many curse words were uttered trying to get this mutant into dynamic poses, only to have them ruined by the rubbery cape pegs popping out.

Hasbro did a bang-up job designing an Age of Apocalypse Apocalypse using new add-ons to build atop the existing Build-A-Figure tooling–but ultimately, the poor plastic quality and inability of some of those add-ons to stay in place (plus some irritating upper body articulation issues) knocks down the score on an otherwise excellent action figure.