What Do You Meme?® Launches Dude with Sign’s The Cardboard Game

NEW YORK, April 27, 2021 /PRNewswire/ –The leading manufacturer of adult party games has launched the first piece of IP associated with the wildly popular Dude With Sign brand. Dude with Sign’s The Cardboard Game is available exclusively at Target stores and Target.com. Dude with Sign has taken the internet by storm since Seth Philips took to the streets of New York in 2019 with a cardboard sign that read, “Stop replying-all to company-wide emails.” He posted it on the @dudewithsign Instagram account and rose to immediate viral star status, amassing a 7.5 million-strong following for his documentation of other relatable and funny everyday sentiments. 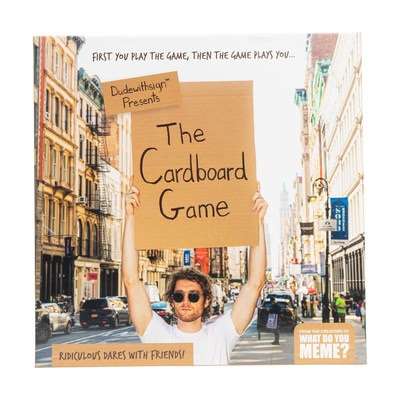 Packed with ridiculous dares written by Seth (@dudewithsign himself) along with the What Do You Meme? team, this adult party game guarantees a night of hilarity that you and your friends won’t soon forget (or live down)! With 300 Dare cards and 50 Wild cards, no two games are ever the same.

“The early feedback on Dude With Sign’s The Cardboard Game has been so exciting to see. We’re happy we’ve been able to tap into something that resonates with so many people,” says Ben Kaplan, Partner of What Do You Meme?®.

About What Do You Meme?®
What Do You Meme?® is a new-age game company driven by the digital age and inspired by pop culture. What Do You Meme?® games are designed to bring the internet-style, shareable humor from your phone to your living room. After launching Amazon’s #1 best-selling game in 2016, the company has gone on to release more than sixty other game products including several new family-friendly game titles. What Do You Meme? is on Instagram @WhatDoYouMeme.