Even though we’re almost a full quarter into 2021 now, only two waves of Hasbro Marvel Legends 2021 figures have actually hit stores. That’s a bummer since I like having ample new figures to buy, but I’m also thankful since I’m already way behind on reviews. But this week I’ll be knocking out reviews for both of the Marvel Legends Build-A-Figures so far—and I’m starting with the one that’s somehow even more Z-List than Stilt-Man! The Marvel Legends Tri-Sentinel BAF can be assembled by buying 6/7ths of this year’s House of X Marvel Legends X-Men series: is this a Sentinel worth building? 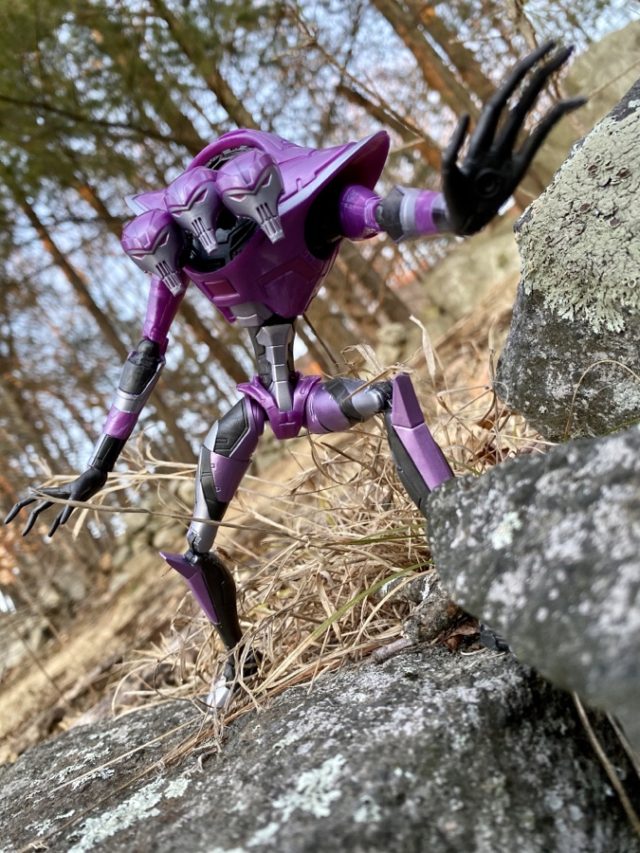 For those who haven’t read X-Men for a few years (or those who are reading and missed the single digit number of panels this character is in) and are wondering who the hell this character is, it’s the Theta Sentinel (randomly called “Tri-Sentinel” by Hasbro for whatever reason) from Jonathan Hickman’s X-Men Powers of X series (the other half of House of X).

Theta-Sentinel/Tri-Sentinel basically appears in a couple panels 1000 years in the future, has a throwaway line or two, and then blows up. It also got a variant comic book cover for some reason, but it’s not among the many variants I bought for this series because I truly do not care about this character.

But—!! It’s an action figure based on Hickman’s X-Men, so I NEED it. Is it worth needing…? 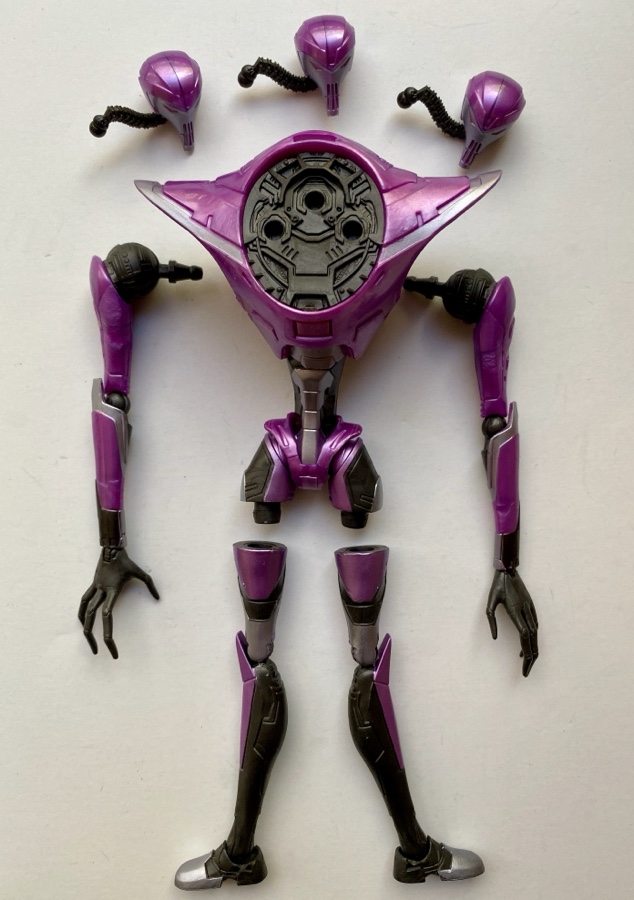 Because you automatically get all of the pieces for the Tri-Sentinel Build-A-Figure by buying all the figures in this X-Men Legends wave—and that was never in doubt—it was a moot point whether or not I’d go after all the pieces to build this figure. And I’m ultimately glad for that because, well… I don’t love this BAF the way I do the majority of Marvel Legends Build-A-Figures. 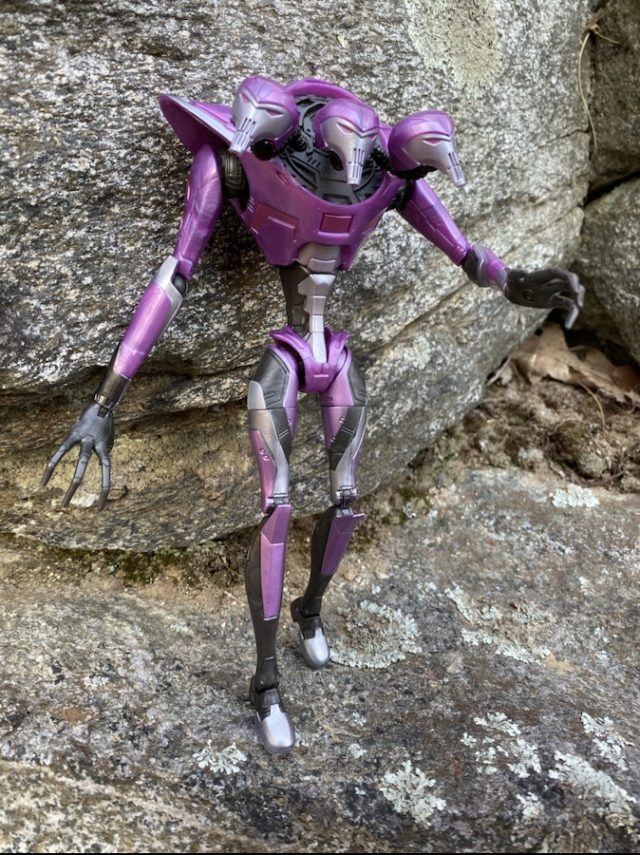 Let me start by emphasizing the positives in my Tri-Sentinel review, as I really hate being a “negative reviewer”. 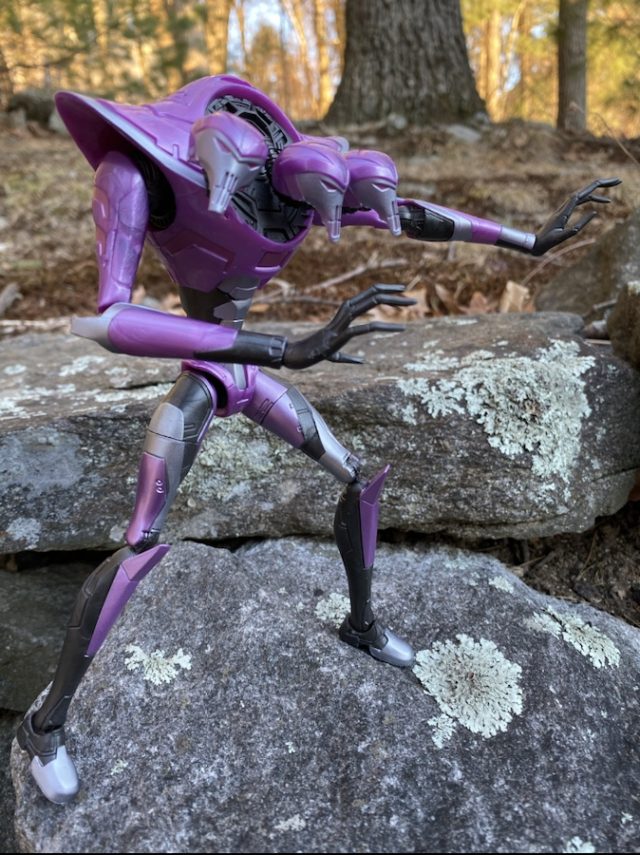 While some folks might think this is just a rework of the SP//DR Build-A-Figure from a few years ago if they haven’t looked at that figure in a while, that notion is actually not based in fact at all. Hasbro has done a ton of new and unique tooling here to make this accurate to the character as it appears in the comics, and while it shares lanky proportions to SP//DR and is also a robot, they are very different toys overall. 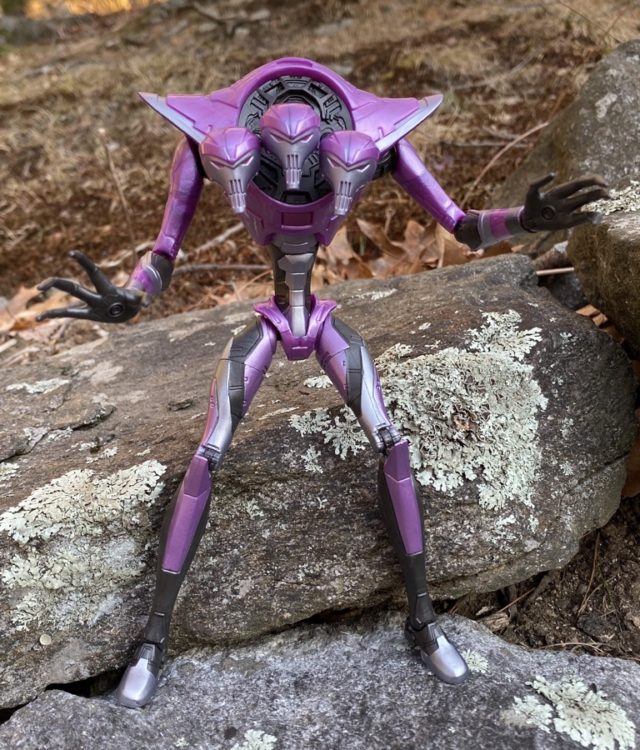 The paint apps used on this are also beautiful. The metallic purple is a showstopper, and is nicely complemented by the grey and silver paints. The shoulder area/carapace could have used some bright pink “energy” highlights, but I think this is a snazzy-looking figure deco-wise even without. 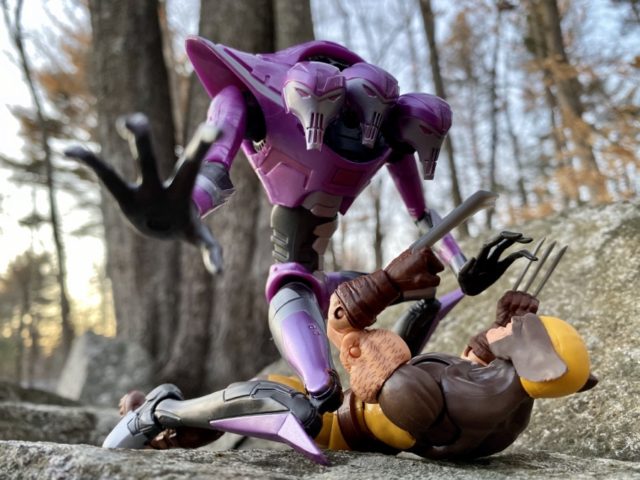 And let’s be frank here: the design for this robot is just plain cool, which I assume is ultimately the reason the Hasbro design team chose to tackle it. Lanky-proportioned killer three-headed robot from the future…? Sweet. 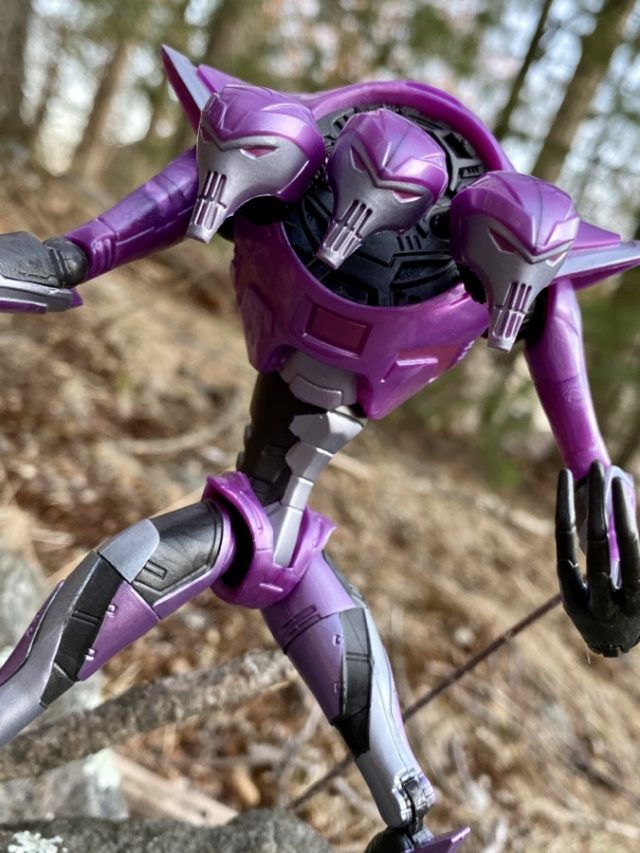 The three robot heads all look as imposing and inhuman as you would expect, and they have an adequate amount of articulation to gaze around and not just look straight forward idly for all eternity. 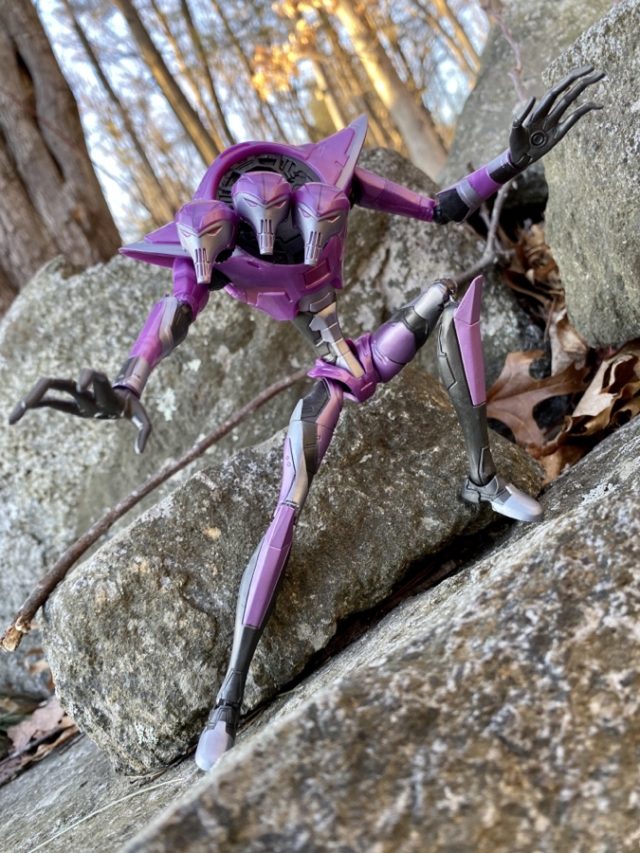 Speaking of articulation, though: the Tri Sentinel Build-A-Figure has a decent amount, although it isn’t nearly as usable as what we expect from the best-articulated Marvel Legends figures. It’s complete articulation theme includes: 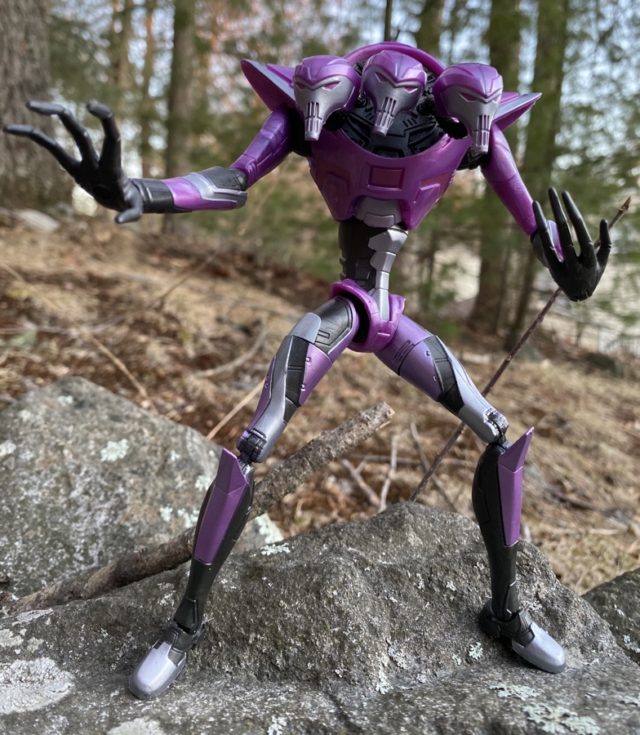 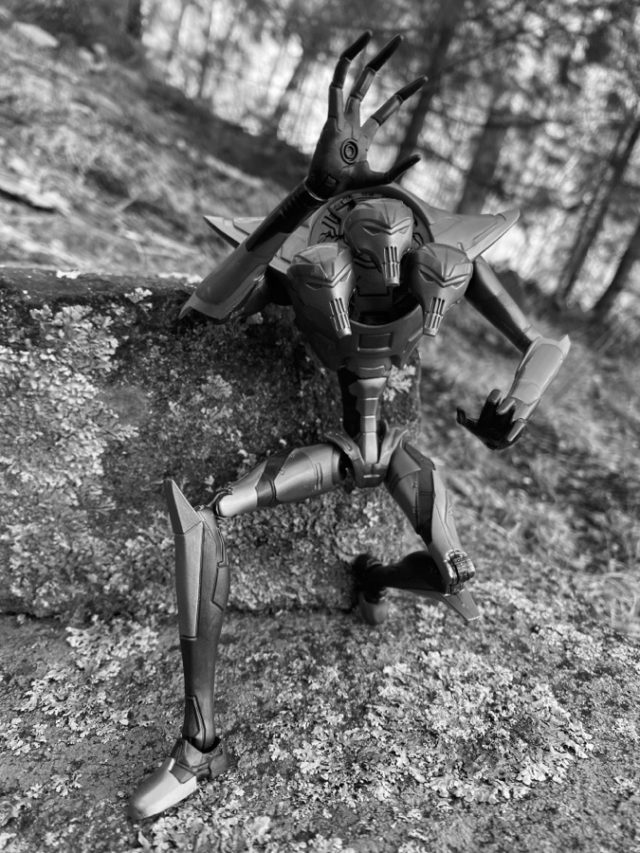 This seems like a lot of articulation—and it can definitely achieve the kneeling pose from the Tri-Sentinel variant cover—but I also had some fights trying to get him to pose how I wanted and get him to actually stand up. The shoulder articulation is surprisingly difficult to work with, and the thin legs and small feet making balancing this top-heavy machine a real chore. 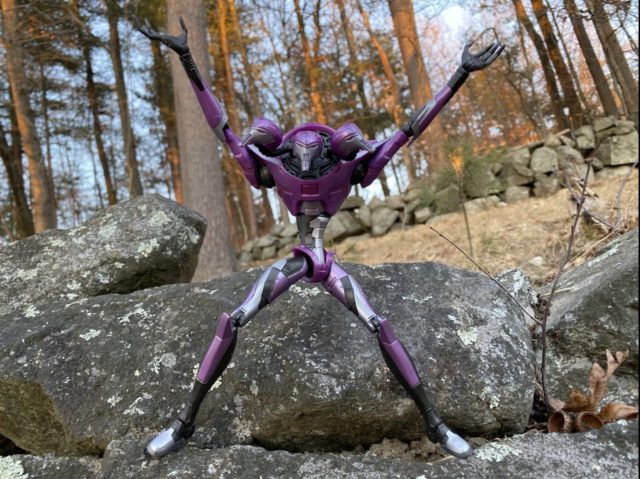 I eventually got the Theta Sentinel BAF to stand for all my photos, but it took some real doing. And even when he is standing stably, there’s not much for this dude to do with his open palms and no accessories. We don’t see this character do much before dying in Powers of X, and I don’t have much of a clue what to do with him as a toy either. He just kind of stands there looking all futuristic and scary. 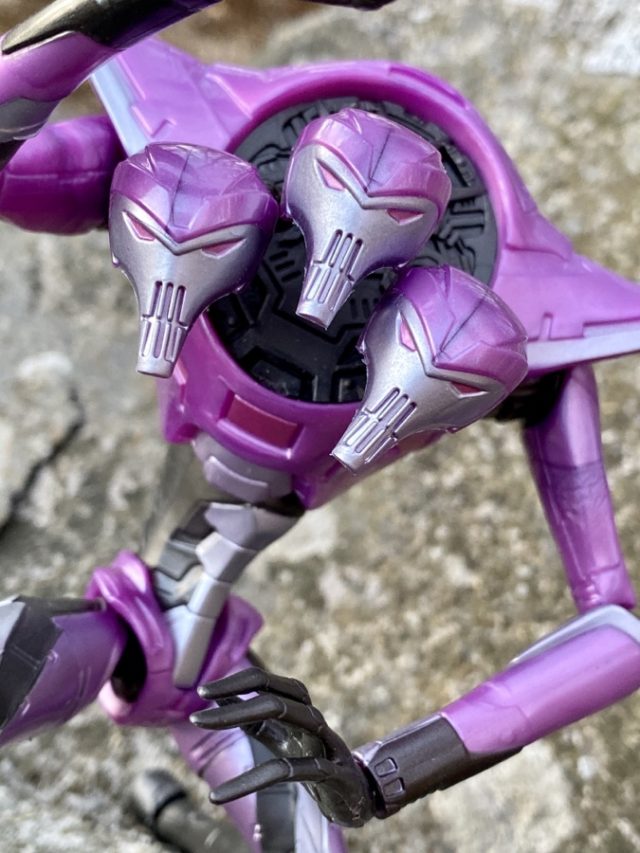 Also, just a note that it can be a true war trying to get those heads to stay in place. I ended up heating both the ball-joints and the place where they plug in to attach them more easily, but even then they fought me a bit during this review and kept trying to pop back out. 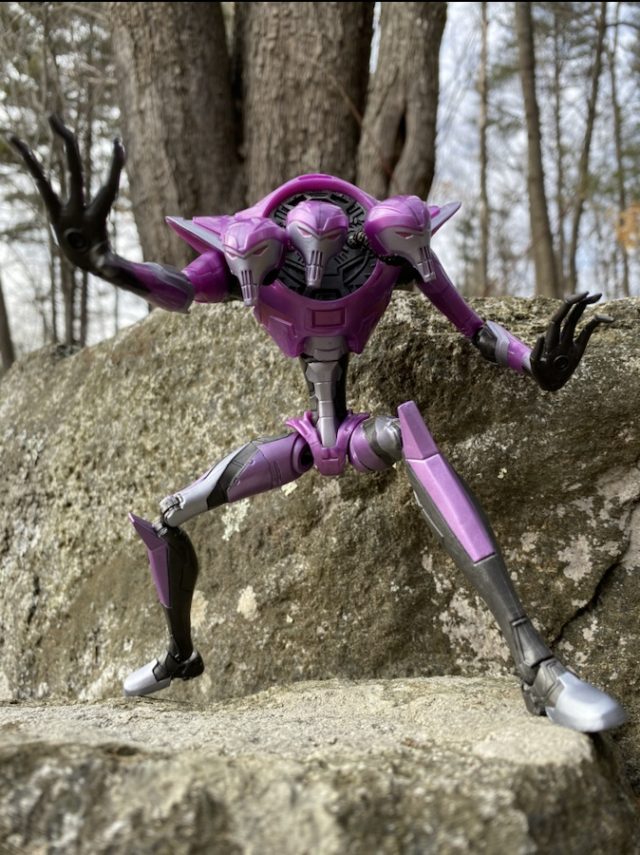 Overall: My personal apathy for this character aside (despite the fact that he’s a Jonathan Hickman character and therefore a must-have for me), the Theta-Sentinel is pretty average and forgettable as far as Marvel Legends Build-A-Figures go. Tri-Sentinel’s largely top-heavy proportions and thin feet make posing exceedingly difficult, and it doesn’t seem very threatening with no accessories or effects pieces and two spread-fingered open hands.

I think the purple and silver and grey paints look awesome and I appreciate the novelty of a three-headed robot figure, but I just can’t think of any fun poses that this guy can actually achieve—especially with the alternate head for Wolverine being the only “heroic” Powers of X character available. Even with my love for all X-things Hickman, I’m pretty “eh” on this figure. A surprising choice and interesting design, but rather average overall.