If you had asked me a year ago what X-Men characters I never in my life thought would be made as super-articulated Hasbro Marvel Legends, Sugar Man would have definitely been on that list. But that was before Hasbro announced an entire series of Age of Apocalypse figures, defying fans’ expectations by not making the Build-A-Figure Holocaust or Apocalypse or Sabretooth, but instead… the Sugar Man! And so, the Sugar Man BAF has now cometh for those who bought the whole wave! Is this monstrous menace worth assembling…? 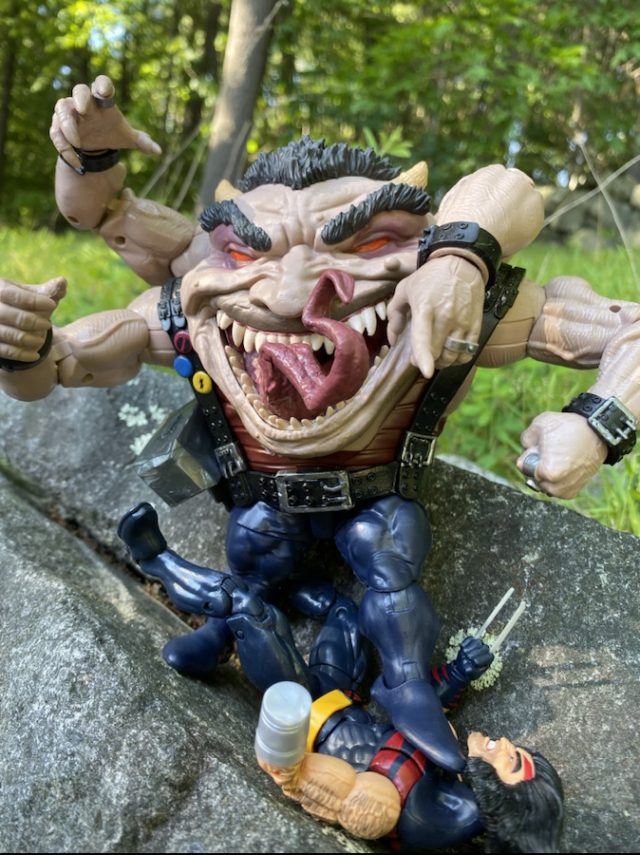 The four months of comics that made up the original “X-Men: Age of Apocalypse” crossover are some of my fondest memories growing up reading comic books as a teenager, and one of the highlights of that story were the four issues of Chris Bachalo and Scott Lobdell’s “Generation Next”.

While “Generation Next” made me really bond with characters like Mondo and Skin and Chamber for the first time, it also introduced a villain who would shockingly cross over into the main 616 Marvel Universe and make quite a few appearances over the years: the grotesque Sugar Man!

Toybiz produced a toy of the figure back in the 90s, and to my surprise, Hasbro has followed suit with their own Marvel Legends Sugar Man Build-A-Figure! 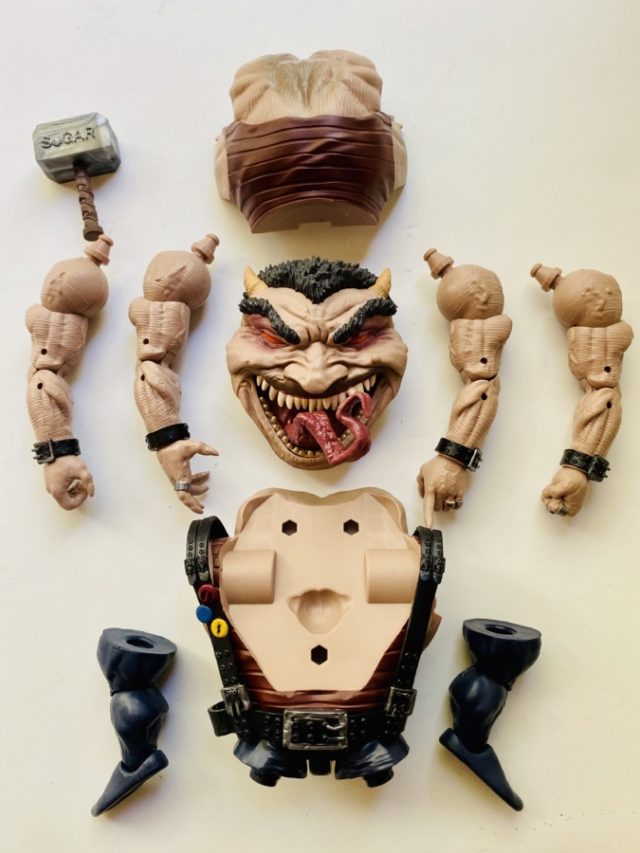 Now, the Sugar Man is not an especially deep or compelling character—the intrigue of this guy is completely his horrific visual appearance. And while his design has changed drastically almost every time he’s appeared, Hasbro has gone all-out with unique tooling here to give us a Sugar Man that’s instantly and definitely recognizable.

I have a great appreciation that Hasbro was willing to make something like this for us at all, as this is obviously not a character that it’s going to be easy to re-utilize the tooling for in the future (at all). 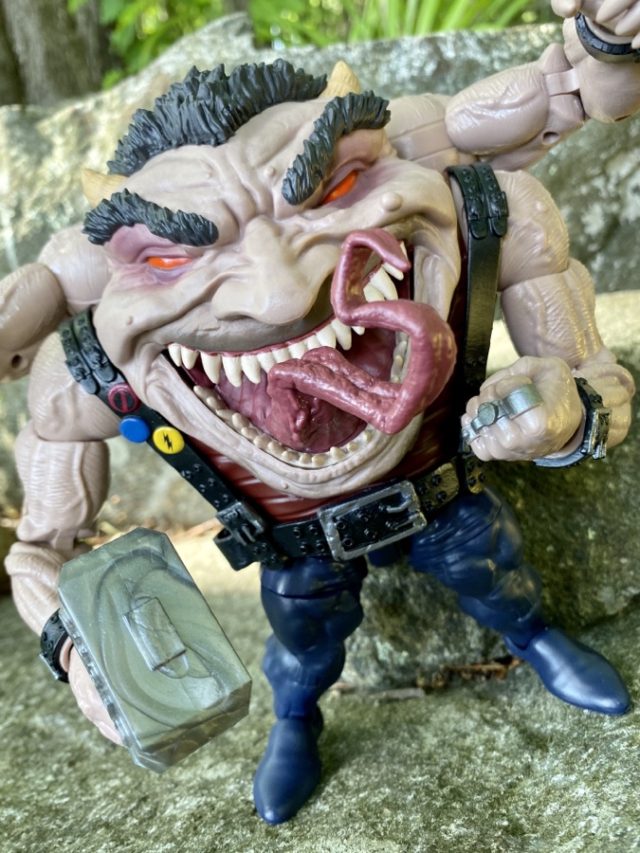 The humongous, disproportionate head of the Sugar Man looks positively demonic—and is also the coolest and most striking part of the BAF. The protruding, folding tongue (capable of killing people, as seen in the comics!) is terrifying, and the thick eyebrows, pointed teeth and red eyes seal the deal that this is the grotesqueness of this portrait. No one will ever accuse this figure of having a “blank stare” expression, that’s for sure! 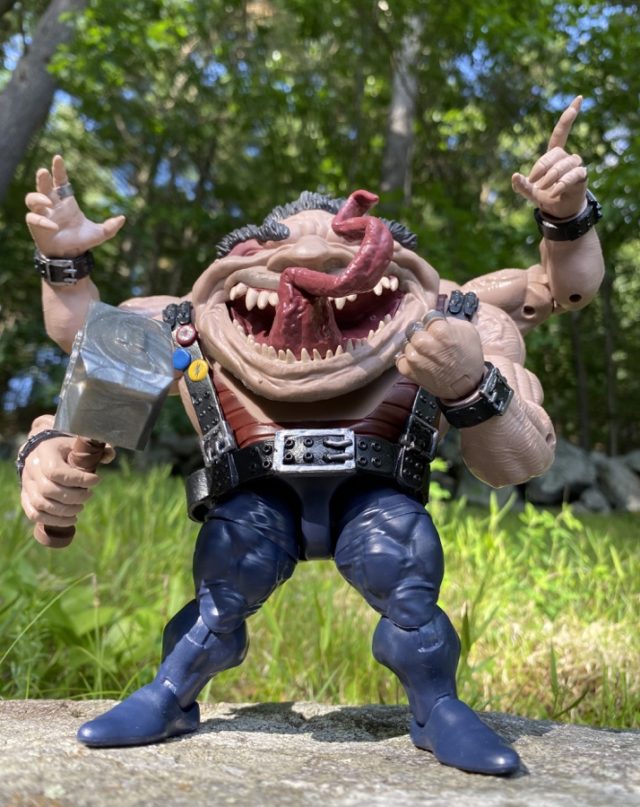 Sugar Man is a four-armed creature (for whatever reason), and Hasbro has infused a lot of personality into all four of these appendages by giving him a unique hand at the end of each arm: one pointing, one in a fist (with brass knuckles!), one grabbing, and one quasi-relaxed. 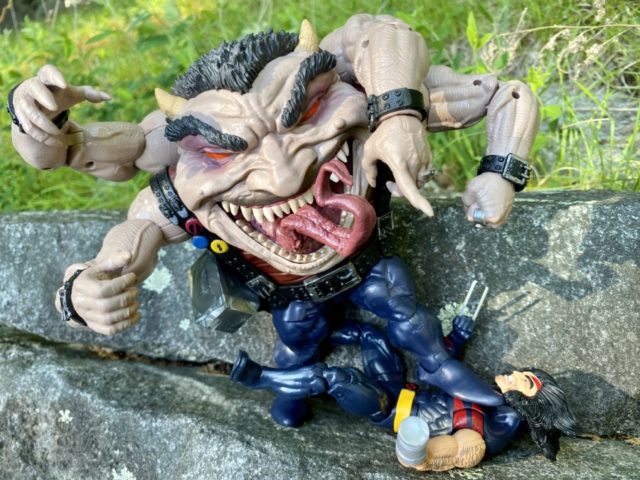 I really dig the way that the four different hands change things up and draw your eye to different parts of the toy. There’s a lot going on with this figure. 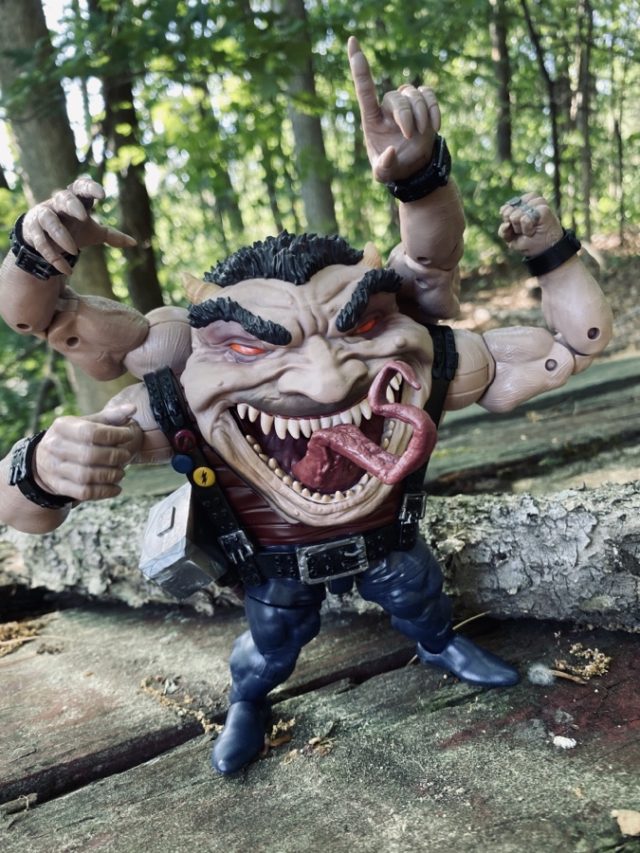 And speaking of a lot going on: there’s also five add-on costume pieces present here, and all of them have paint deco. Four black bracelets (one for each wrist) with silver deco on the buckles, and a huge pair of suspenders with painted buttons and buckles. The bright colors on the buttons add a lot to a figure that’s otherwise rather dreary, so I’m grateful Hasbro paid for the extra expense of painting these details. 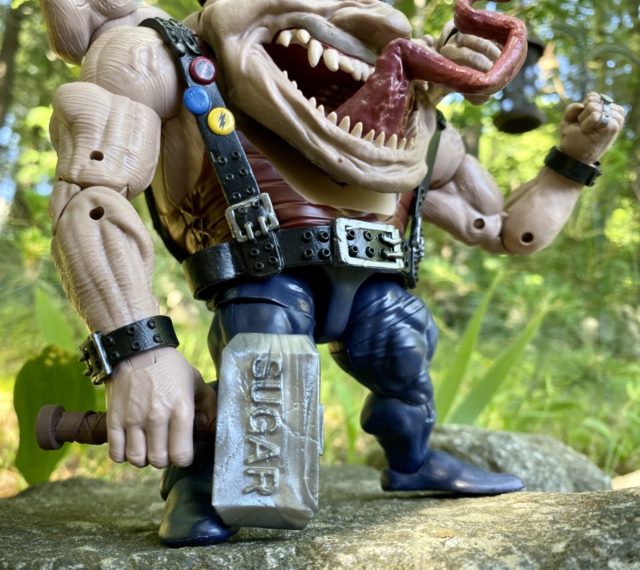 The X-Men Legends Sugar Man figure has one additional accessory: an oversized hammer that has “SUGAR” written on the side of the head (because why not?). Giving this figure a weapon definitely makes him feel more threatening and adds to the overall aesthetic. His grasping hand holds the hammer tightly and the visual is grand. 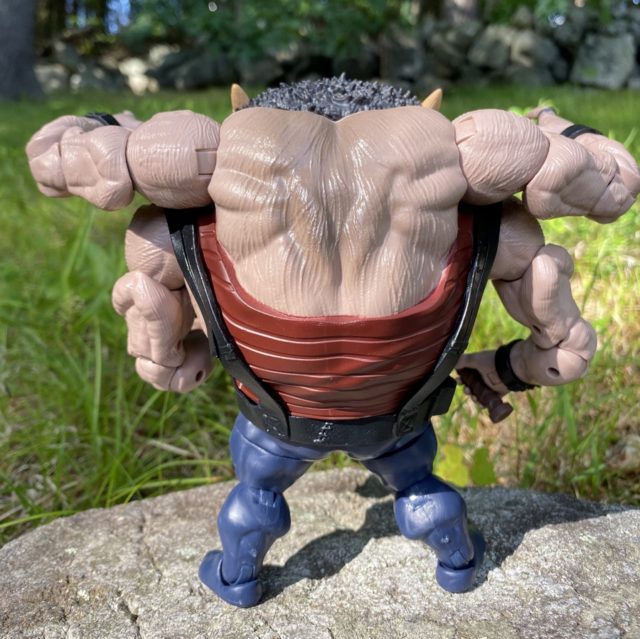 Furthermore, this is an action figure with some serious heft to it. Picking it up, I felt like I was lifting a mini bowling ball or something. If you prefer your figures to have a little weight to them, you’ll be happy with the quality here. 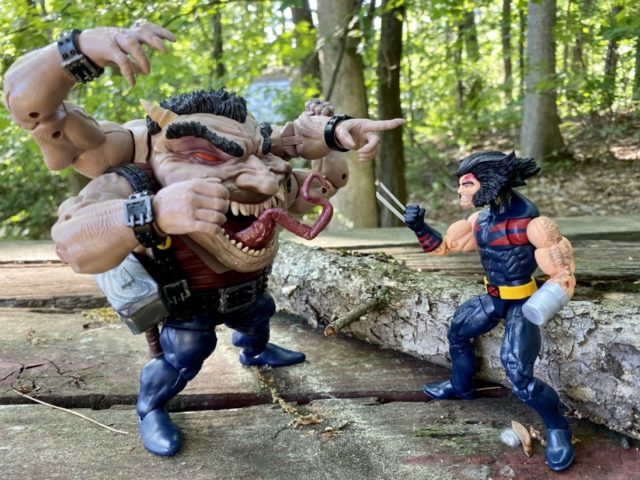 And while you might think an ultra-bulky action figure like this would have limited articulation, I was somewhat surprised to realize there’s a crap-ton of flexibility present, including:

Over two-dozen points of articulation on a character design like this where you effectively cannot have any kind of head or abdominal articulation is downright amazing. 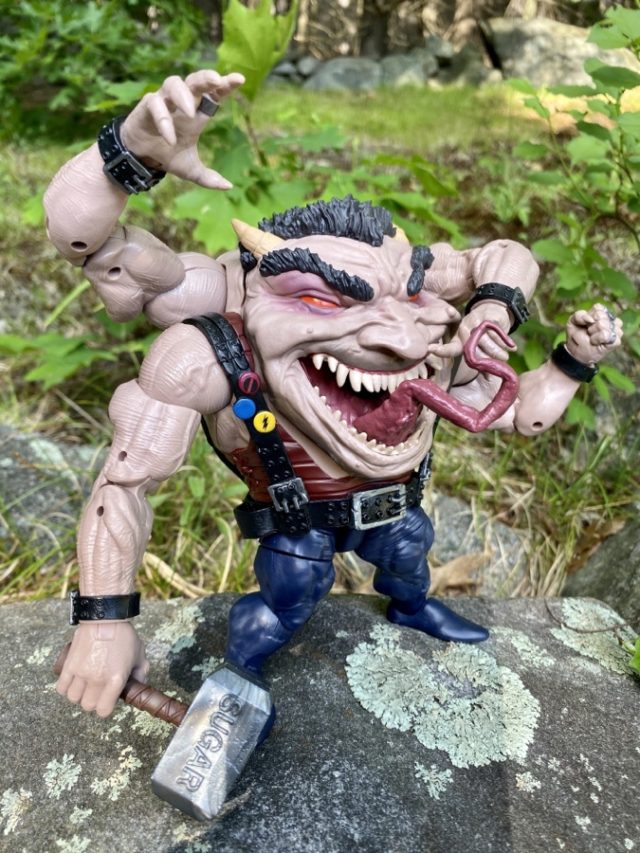 Working to get a stable pose with the legs can be difficult due to the sheer bulk of the upper body, but posing the arms is a ton of fun. Sugar Man can even pick his nose with his top left arm while attacking with his other arms! (Ew.) From a posing point of view, I am unconvinced it would be possible to design this Marvel Legends Build A Figure any better than Hasbro has.

And that brings me to my conclusion… 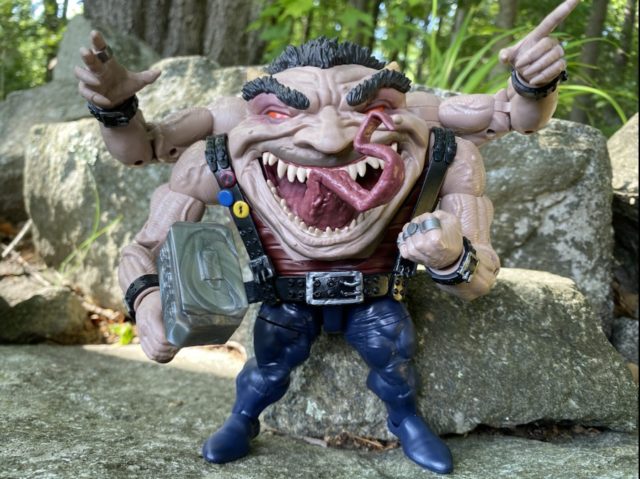 Overall: I had a major internal struggle over the grade for this Marvel Legends Sugar Man Build-A-Figure, as I hate diluting the grading system by giving out too many high scores. That said, here’s what it comes down to: this BAF Sugar Man is a major achievement in many aspects, and I don’t think Hasbro could have done him much better—nor do I think that any other company ever will.

Every point of articulation that could be integrated has been, the quality on the joints and paint is top-notch, the sculpting and paint details are tremendous, the sculpt is rife with personality, and the accessories/add-on bits are superb. This may be an action figure of a semi-obscure Marvel villain—but it’s a perfect one. Mad prop, Hasbro. This release is a victory, no doubt about it.