TORONTO, Oct. 29, 2020 /CNW/ – Spin Master Corp. (TSX: TOY) (www.spinmaster.com), a leading global children’s entertainment company, continues to build on its legacy of innovation, receiving five nominations for the 2021 Toy of the Year (TOTY) Awards. The finalists were announced today by The Toy Association, bringing the total TOTY nominations Spin Master has received to date to 115. 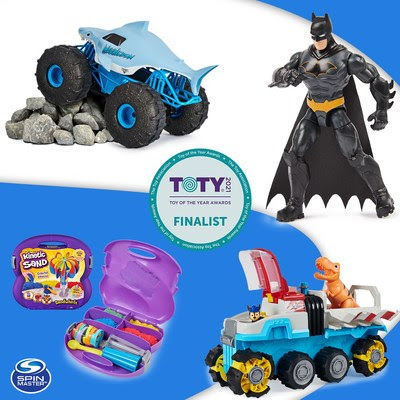 The TOTY Awards are known as The Oscars® of the toy industry. For 2021, Spin Master received five TOTY nominations across five categories:  License of the Year – PAW Patrol®: Dino Rescue

, and Preschool Toy of the Year – PAW Patrol Dino Patroller

“Innovation is at the heart of everything we do and it is an honor to see Spin Master’s beloved brands and licensing partners recognized as finalists for the 2021 TOTY Awards,” said Chris Beardall, Spin Master’s Executive Vice President of Global Sales. “These nominations reflect our continued commitment to creating the most innovative products across an incredible breadth of toy categories that reimagine where imagination can take us.”

The winners of the 2021 TOTY Awards will be unveiled by The Toy Association on February 12, 2021 during a virtual awards ceremony event.

Spin Master Corp. (TSX:TOY) is a leading global children’s entertainment company creating exceptional play experiences through a diverse portfolio of innovative toys, entertainment franchises and digital toys and games. Spin Master is best known for award-winning brands PAW Patrol®, Bakugan®, Kinetic Sand®, Air Hogs®, Hatchimals® and GUND®, and is the toy licensee for other popular properties.  Spin Master Entertainment creates and produces compelling multiplatform content, stories and endearing characters through its in-house studio and partnerships with outside creators, including the preschool success PAW Patrol and 10 other television series, which are distributed in more than 160 countries. The Company has an established digital presence anchored by the Toca Boca® and Sago Mini® brands, which combined have more than 25 million monthly active users. With over 1,800 employees in 28 offices globally, Spin Master distributes products in more than 100 countries. For more information visit spinmaster.com or follow on Instagram, Facebook and Twitter @spinmaster.