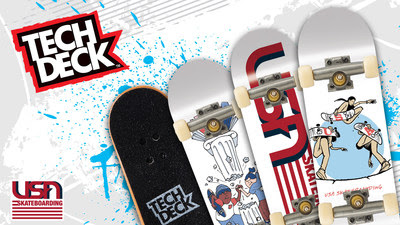 A global leader in the world of fingerboarding, the Tech Deck brand creates working replicas of skateboards that skateboarding enthusiasts ‘ride’ by mastering tricks and maneuvers with their fingers. Well-known in the skateboarding community, the brand has built a loyal following of skilled fingerboarders, collectors and kids and now the fan-favorite joins forces with USA Skateboarding as the sport makes its debut at the Tokyo 2020 Olympic Games this summer.

“Tech Deck and USA Skateboarding share a passion for and commitment to growing and celebrating the sport and culture of skateboarding,” said Chris Beardall, Spin Master’s President of Toys and Chief Commercial Officer. “We are thrilled to be starting our sponsorship during such an exciting year as skateboarding debuts at the Olympics and reaches a whole new generation of fans.”

“The heart of skateboarding is fun, and no company embodies that better than Tech Deck,” said Josh Friedberg, CEO, USA Skateboarding. “From the day we started our initial discussions, Tech Deck’s commitment to skateboarding culture and their natural fit into our existing initiatives made it clear that we had a great opportunity – we’re incredibly excited to have them as a partner in this historic year for skateboarding.”

Later this year, the Tech Deck brand will also be a supporting partner of a skateboarding-focused STEAM curriculum for kids offered through Innoskate – a joint venture between the Smithsonian’s Lemelson Center for the Study of Invention and Innovation and USA Skateboarding.

About Spin Master
Spin Master Corp. (TSX: TOY) is a leading global children’s entertainment company creating exceptional play experiences through a diverse portfolio of innovative toys, entertainment franchises and digital games. Spin Master is best known for award-winning brands PAW Patrol®, Bakugan®, Kinetic Sand®, Air Hogs®, Hatchimals®, Rubik’s Cube® and GUND®, and is the toy licensee for other popular properties.  Spin Master Entertainment creates and produces compelling multiplatform content, stories and endearing characters through its in-house studio and partnerships with outside creators, including the preschool success PAW Patrol and nine other original shows along with multiple short-form series, which are distributed in more than 190 countries. The Company has an established digital presence anchored by the Toca Boca® and Sago Mini® brands, which combined have more than 40 million monthly active users. With close to 2,000 employees in 28 offices globally, Spin Master distributes products in more than 100 countries. For more information visit spinmaster.com or follow on Instagram, Facebook and Twitter @spinmaster.