Wolverine is miles away from being one of my favorite Mutants, but he’s such a central figure on so many X-Men rosters across eras that I own dozens of figures of him. But one iteration I’ve managed to avoid owning (even in Funko Pop form!) is his original “origin” look. …At least, until now! I needed the last piece to build the Caliban Build-A-Figure, so I had to order the new Hasbro X-Men Marvel Legends Weapon X figure. But to my humongous surprise—I’m actually glad I had to buy this Wolverine… 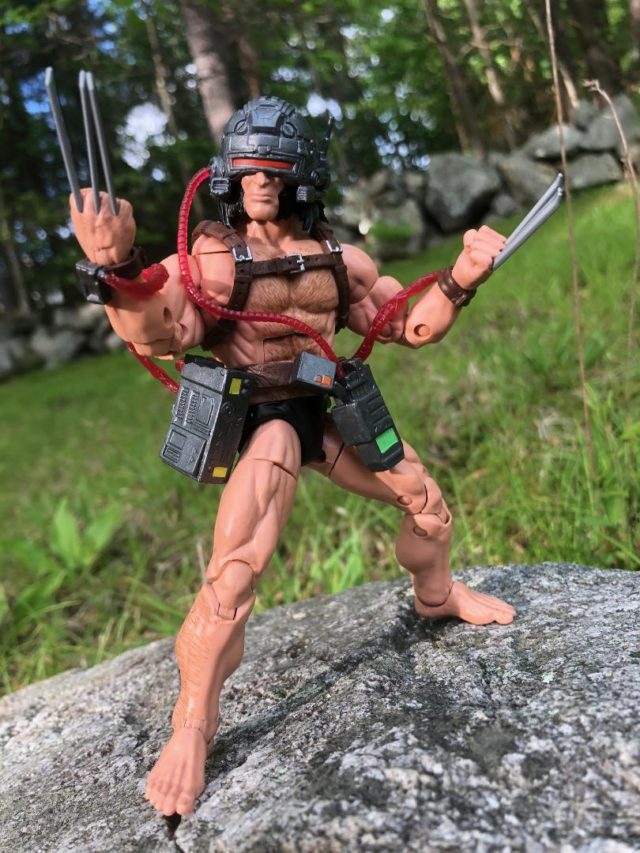 I’ve come close on many occasions to buying a piece of Weapon X merchandise (be it the awesome Iron Studios Statue or the adorable Funko POP), but I’ve never been able to bring myself to pull the trigger on “Science Experiment” Wolverine until Hasbro forced me to by packing a Build-A-Figure part in with this X-Men Legends 2019 6” Figure.

I actually sort of tossed this figure aside for a while after pulling the Caliban BAF leg out of his package, but now that I’ve spent some time with him, I gotta say—this “Origin” Wolverine figure rocks. 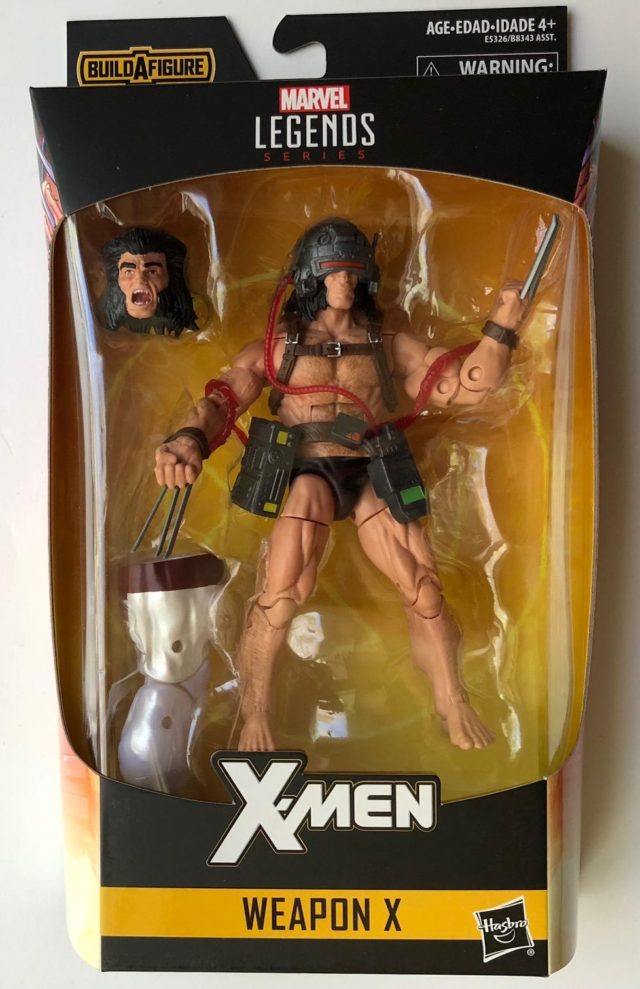 What sets the Weapon X “costume” apart from every other one of Wolverine’s costumes is that, well… it’s just some black undies (or maybe nothing at all, depending on which origin you’re reading). 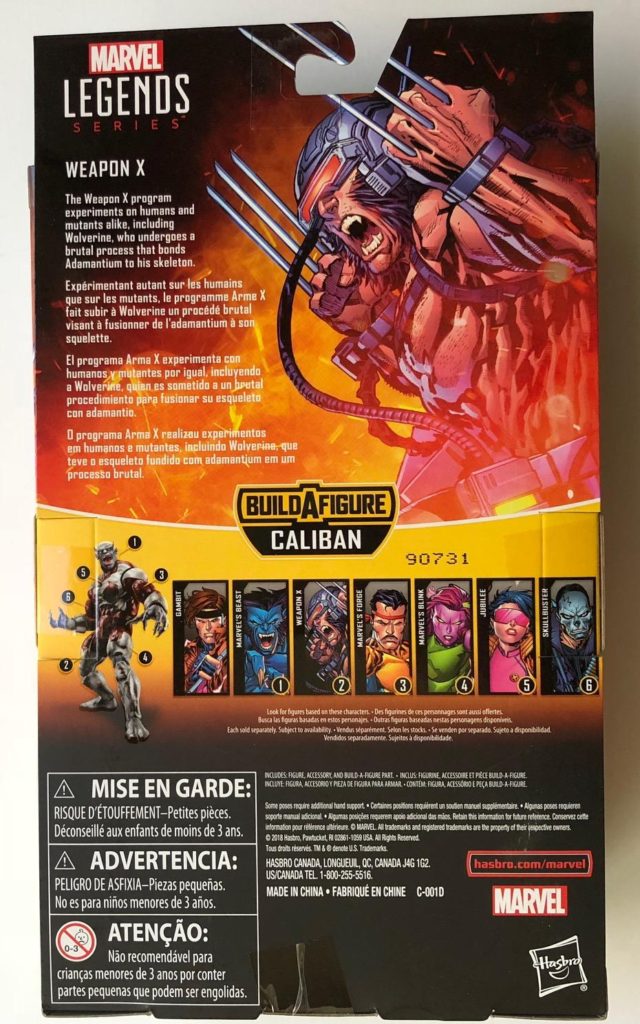 This is the look from when Logan was being forcibly experimented on, and isn’t a superhero costume at all. 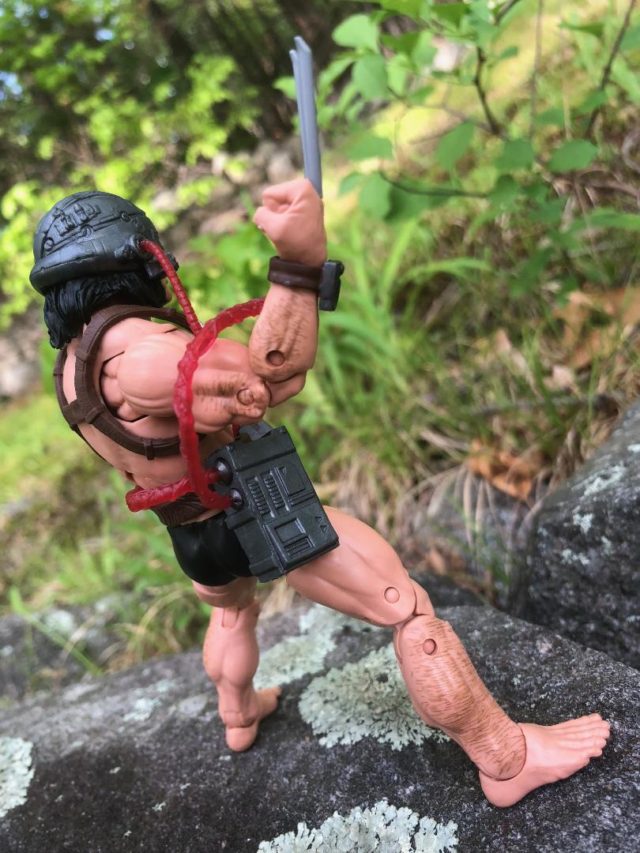 As such, this is basically nudie Wolverine, with all off his limbs totally clothing-free. Hasbro added paint detailing for the hair on Logan’s arms, legs and chest, and it looks great. Wolverine is the best at what he does—and what he does is have ample masculine body hair! 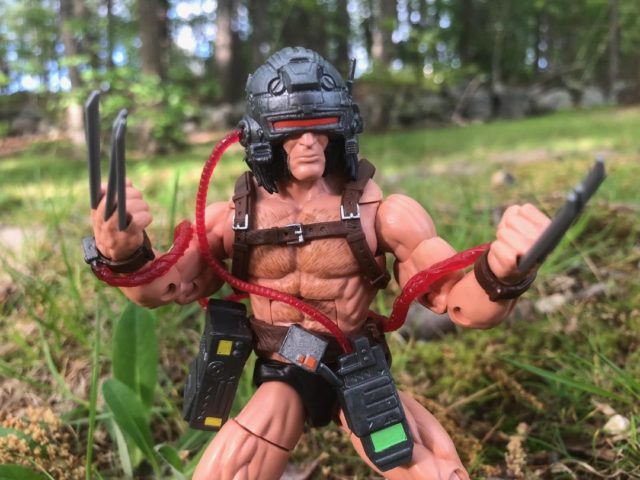 Of course, there is (thankfully) more to this figure than that, as Logan has scientific, medical diagnostic equipment all over his body. His quasi-iconic helmet comes permanently attached to his default head, and there are monitors strewn around his torso. 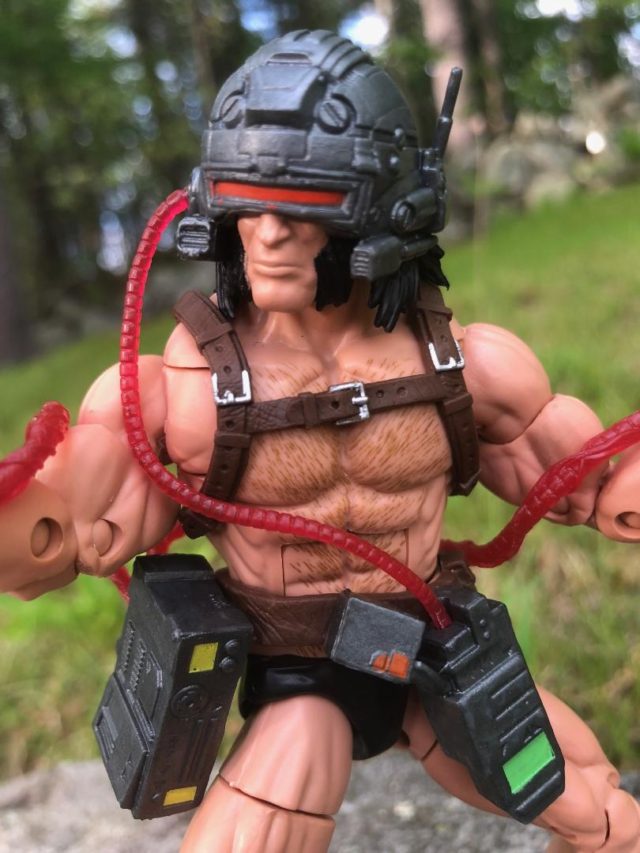 The helmet and all of the monitors have some paint deco on them in various colors, and I’m pleased Hasbro added some minor sculpting details to all of the tech rather than leaving it too plain and toy-like. There are translucent red wires that connect parts of the equipment, which look super cool in the clear red plastic. 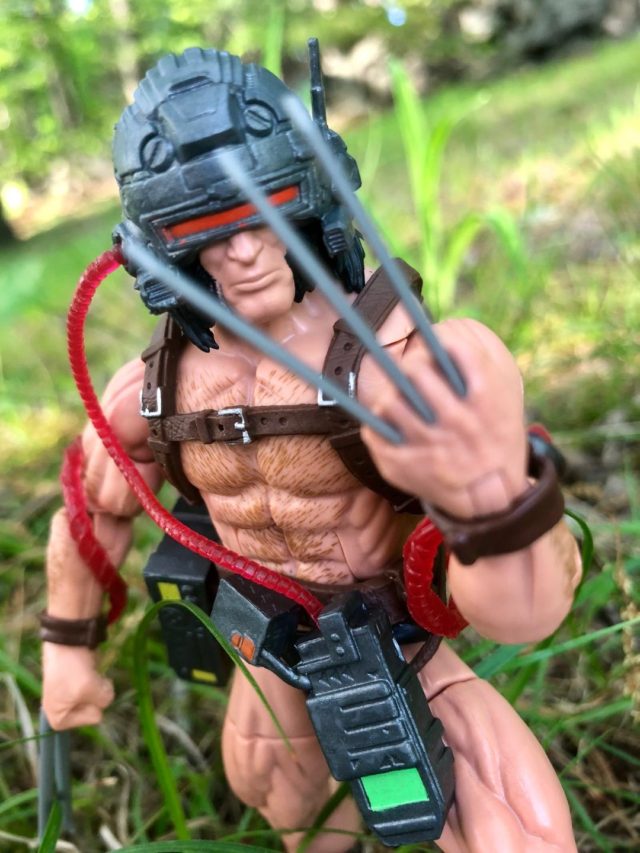 I initially wasn’t impressed with the “zen” serious expression on the default head for this action figure, but after going back and looking at various covers and artwork that this Weapon X look is based on, well… Hasbro nailed it. While a ferocious expression might have been more exciting, the expression they went with on the portrait is very authentic and comic book accurate. 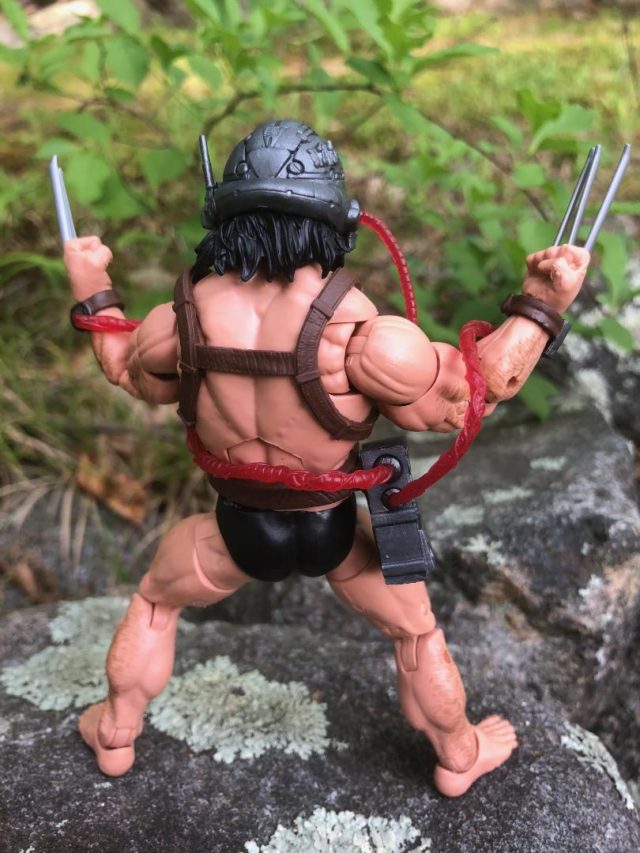 Generally I worry about a figure covered in various tech having hindered articulation, but that’s not a limiting factor here at all. In fact, this X-Men Legends Weapon X figure has a virtually perfect articulation scheme with an excellent range of motion all around, including: 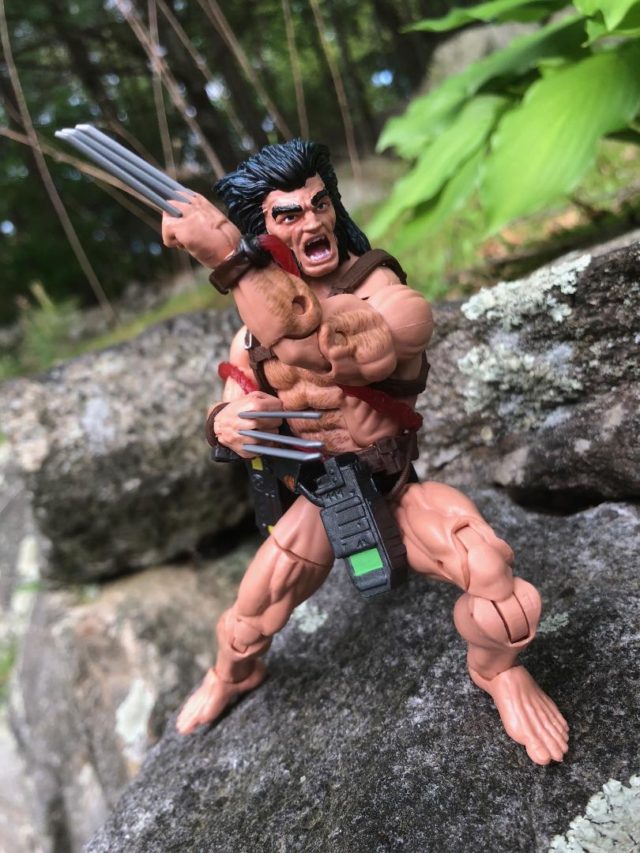 The butterfly shoulders allow him to do all manner of clawing poses that he wouldn’t be able to do otherwise, and the only articulation noticeably absent is calves—which there would be no way to hide on his uncovered (except by hair) legs. 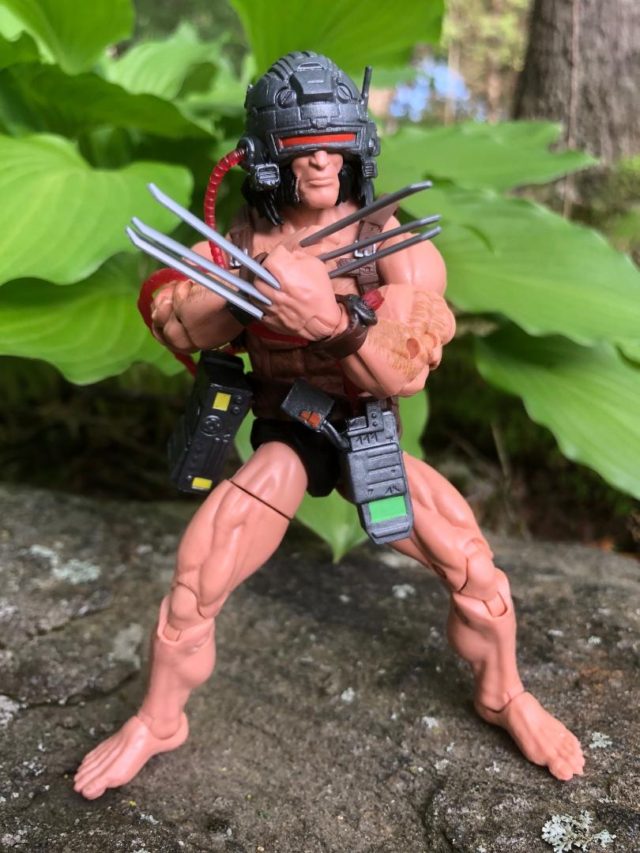 I didn’t expect to, but I really have a lot of fun posing this ML Weapon X figure! 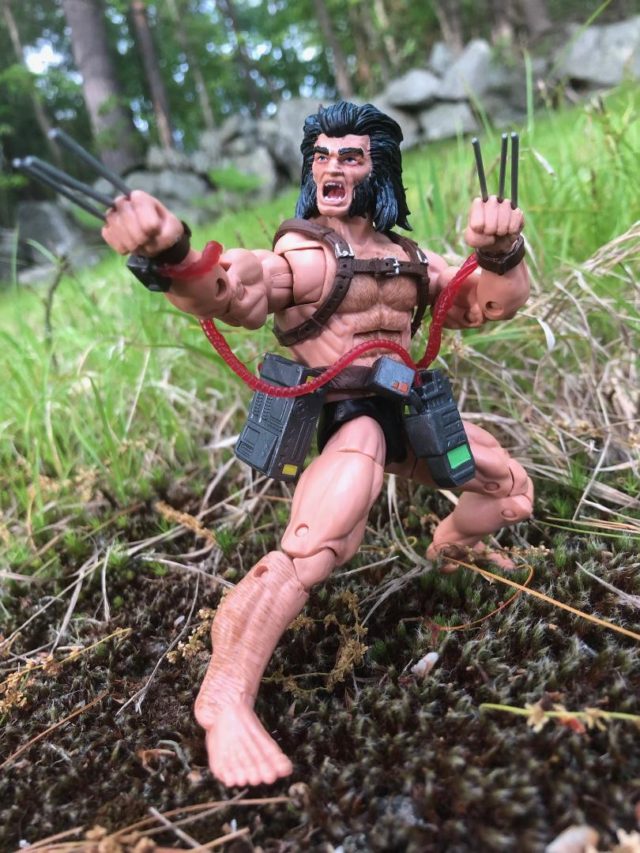 There’s one and only one thing about this Wolverine figure that I genuinely hate—and it’s the interchangeable unmasked Logan head. 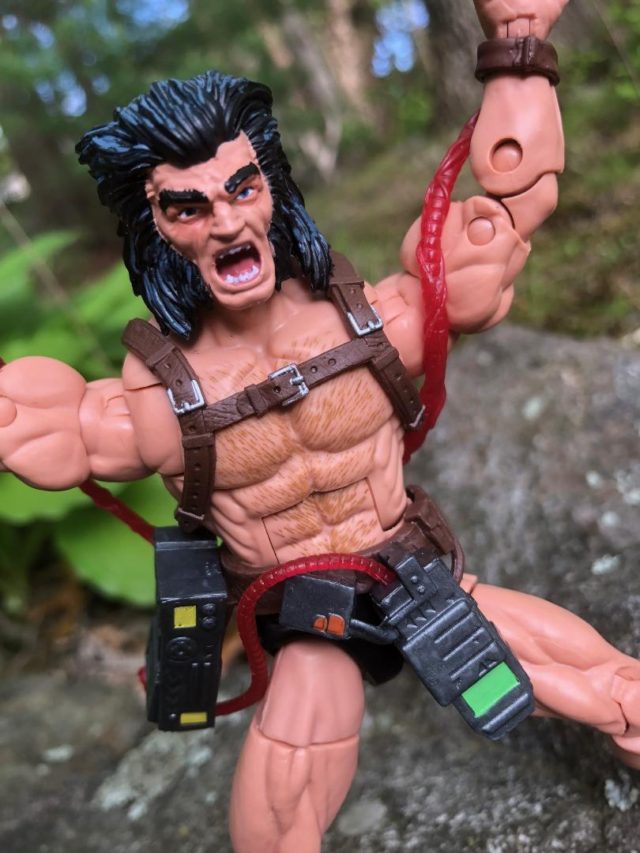 While I dig the blue highlights in the hair and the retro feel of the head, this head is just butt-ugly. Logan doesn’t look enraged or feral here—he looks totally bewildered and dopey, like a confused Neanderthal. I just don’t like this head one bit. 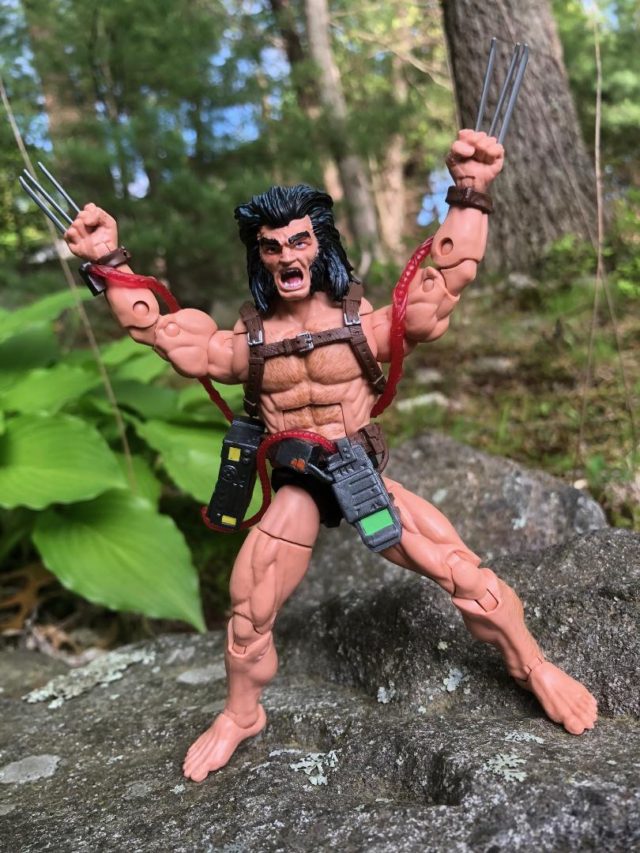 Besides the interchangeable head, the sole other accessory included here is a Caliban BAF leg. I reviewed Caliban a couple weeks back and thought he was pretty groovy, so be sure to check that review out if you’re interested. 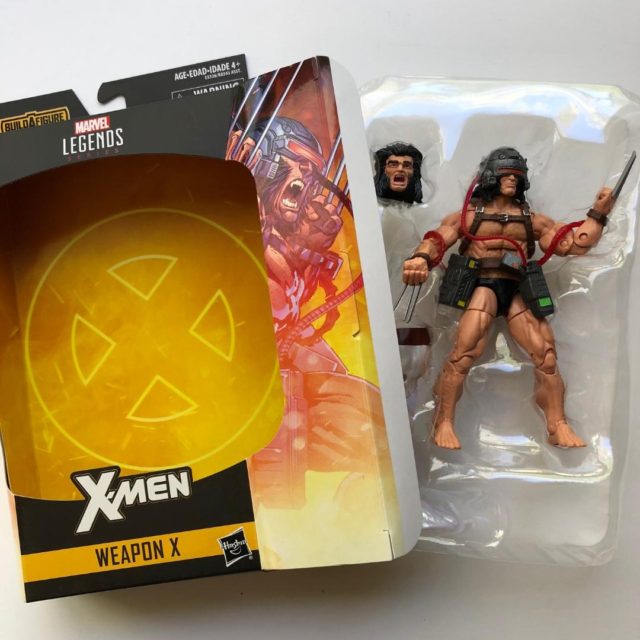 Overall: Despite my general distaste for this particular version of Wolverine, I gotta say: Hasbro has delivered here in spades. This isn’t just a “good” Weapon X action figure—it’s the best damn Weapon X figure ever made. Ultra-articulated, wonderful diagnostic equipment add-ons on him, hair in all the right places… this is the definitive Weapon X Wolverine figure. Other than maybe a more ferocious-looking unmasked Logan head, there’s zero I could ask for to improve upon this Weapon X.