Hasbro is going all-in with the Age of Apocalypse Marvel Legends X-Men 2020 series, which will be composed entirely of AoA versions of characters from the all-time classic comic book storyline. But those planning to dive in and be completists may (or may not) need to pick up one of this year’s already-released figures, who happens to be a key AoA character discounted to 11 bucks today only: Marvel Legends Blink! But is this really the Blink Age of Apocalypse fans have been waiting for…? 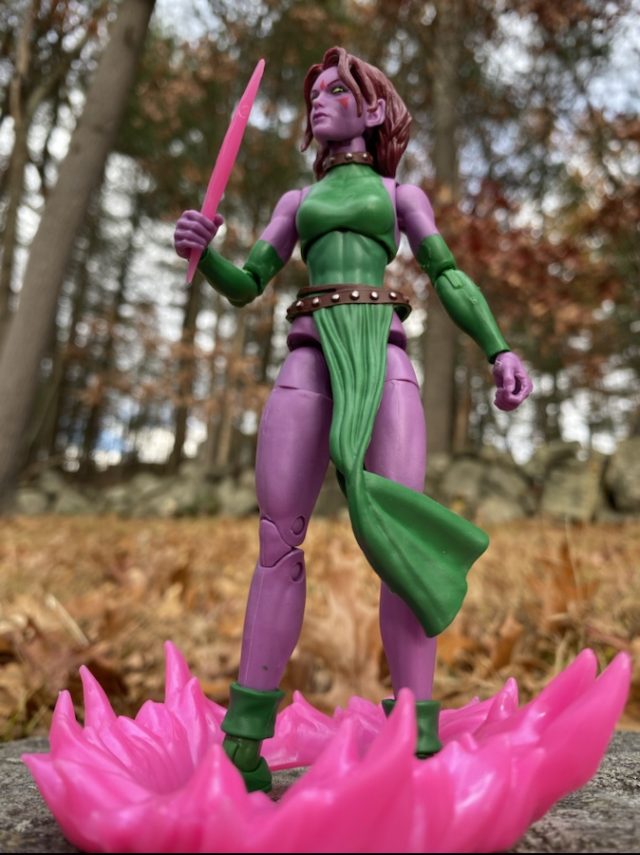 Because I was as obsessed with the X-Men and all their spinoffs in 1994 as anybody, I have vivid recollections of meeting the 616 version of Blink during the Phalanx Covenant story arc that would launch Generation X… and seeing her meet her untimely demise within a month.

Surprisingly, that wasn’t the end for Clarice Ferguson, though—she was reintroduced in the X-Men Age of Apocalypse alternate universe, where she became an instant fan-favorite, leading to her becoming the heart of the dimension-hopping Exiles team for years to come. 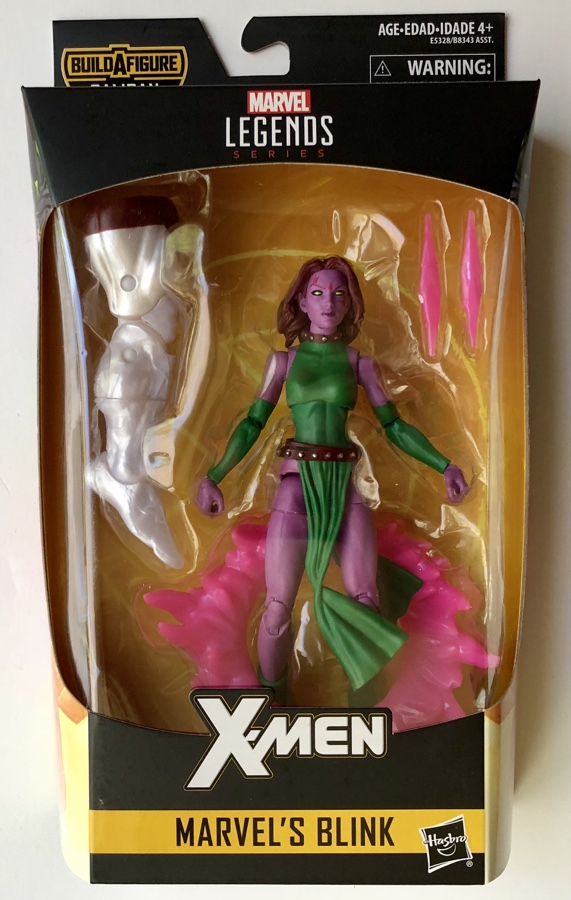 That’s probably more information than many of you needed (or wanted) to hear, but it’s actually relevant here—because this isn’t quite the Age of Apocalypse Blink character design. It’s the older Blink from Exiles, who has quite a few variances in design from her own AoA self. 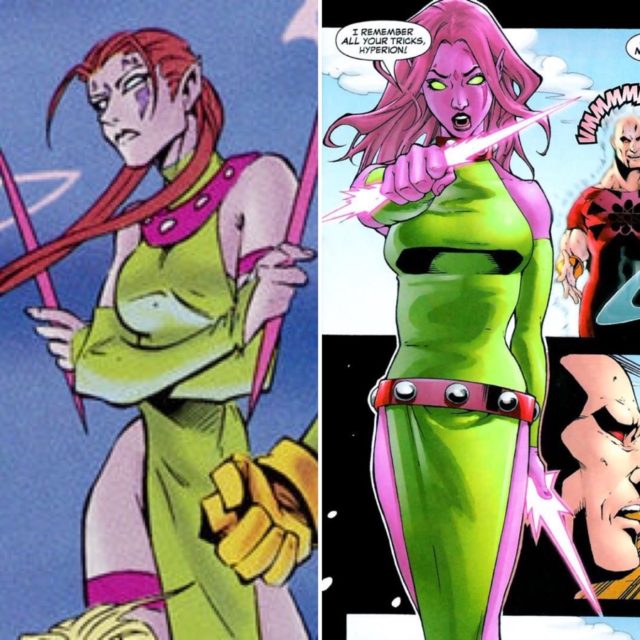 While we got a proper AoA Blink Toybiz figure well over a decade ago, it’s still pretty baffling to me that Hasbro would put out a non-Age of Apocalypse version of the niche character… the year before launching an expansive X-Men Age of Apocalypse Legends series of figures. This just does not make any logical sense to me, and is a primary gripe I have about this figure. Really strange choice, in my opinion. 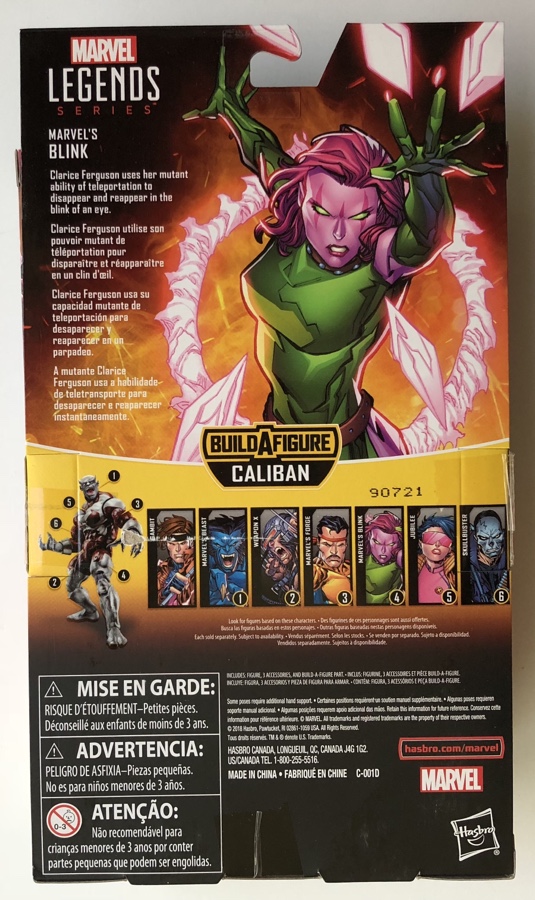 But hey, at least we’re getting some version of Clarice, right…? And honestly, this is a legitimately good figure of the character—just not necessarily the iteration fans are going to wish we got come next year when AoA product starts rolling out. 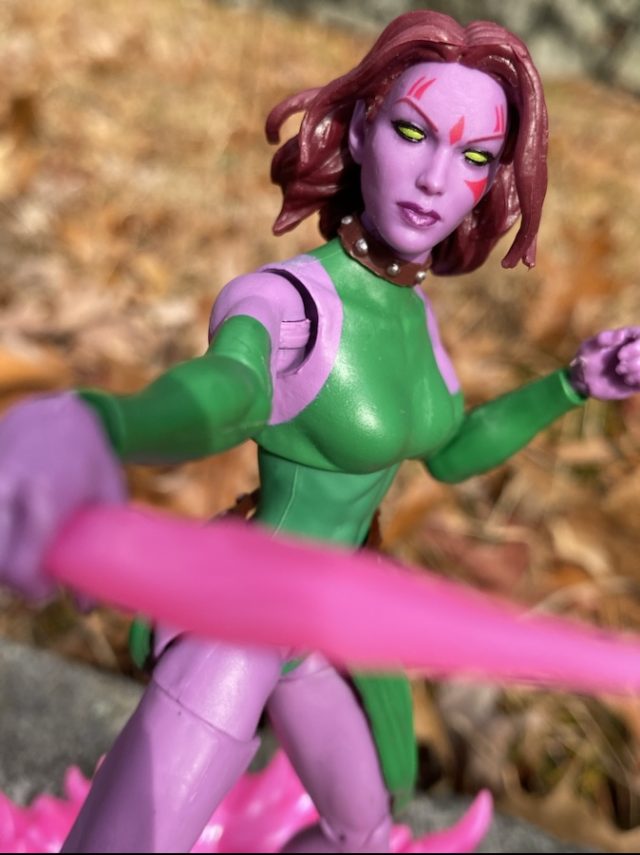 Looking at this action figure, it’s instantly glaringly obvious to anyone familiar with the character who this is. The lilac skin, yellow eyes, maroon hair, clover green costume, distinctive facial tattoos… Hasbro really nailed their colors on this one, which is important since Blink’s unique colors are her most defining characteristics visually. 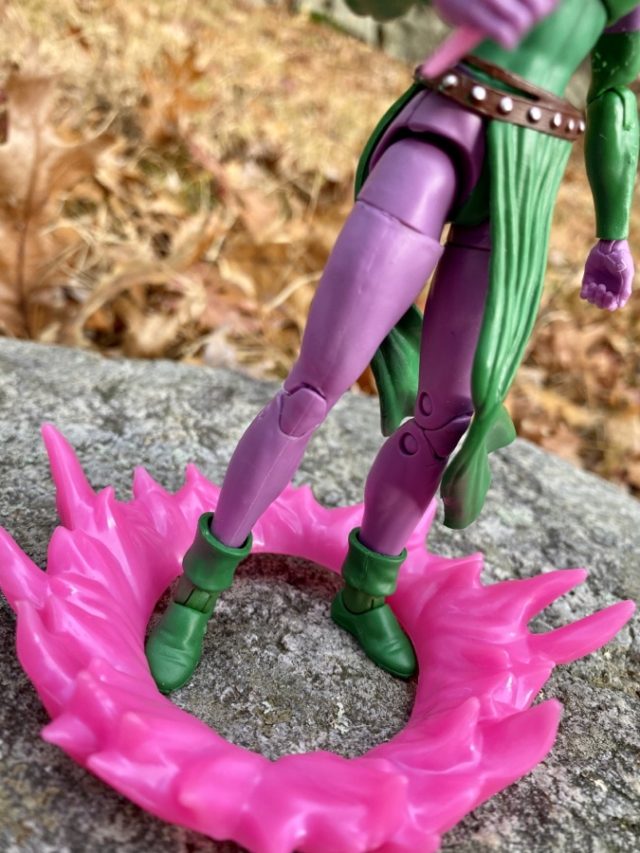 X-Men Legends Blink has four costume “add-on” pieces that aren’t part of her underlying body mold: a studded collar, two cuffs for her boots and a belted skirt/loincloth. The collar and boot cuffs fit well enough, but the skirt is mega-loose and drives me batty the way it flops around uncontrollably and can’t really be forced to stay in any one position. I outright hate loose add-on bits like this. 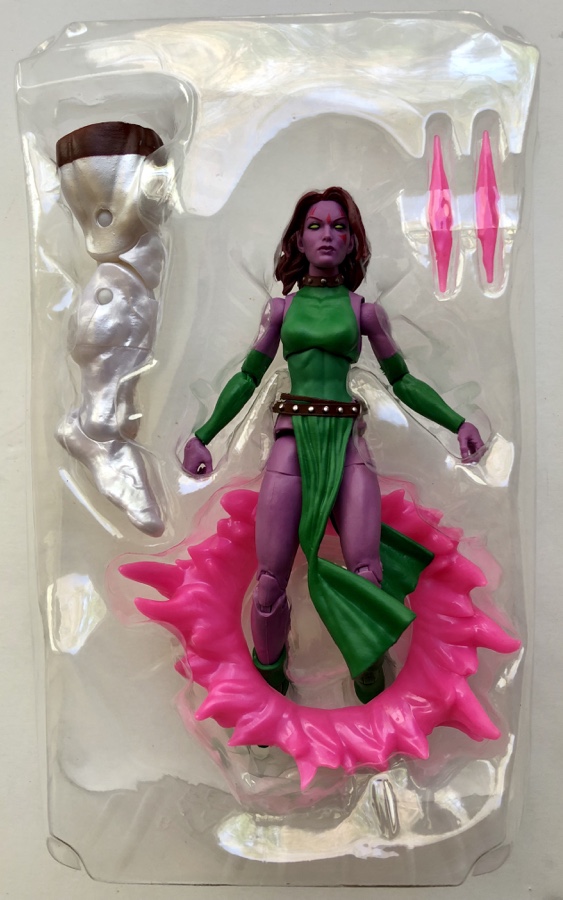 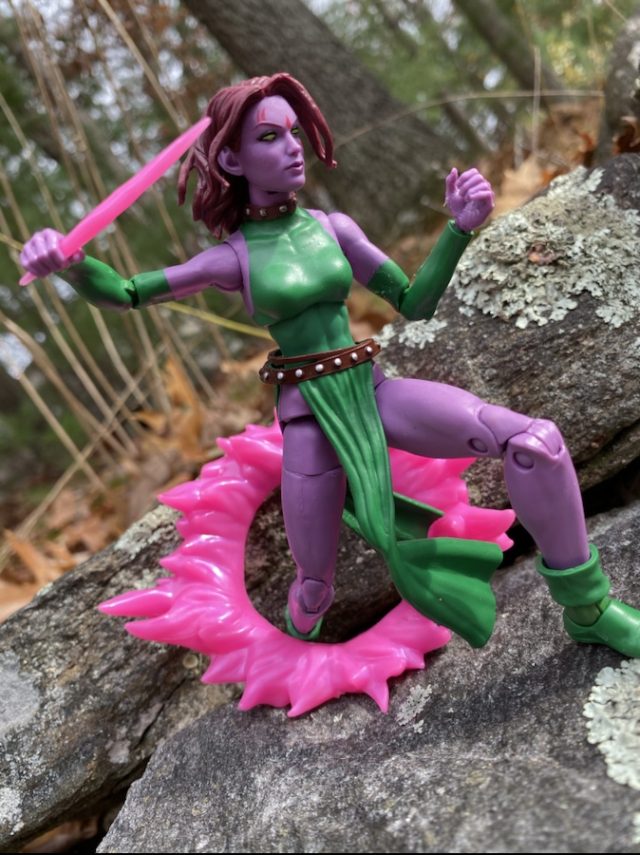 I thought for certain we’d see the teleporting ring recolored and packed with Nightcrawler, but nope! It’s a unique accessory that adds a lot of fun to this action figure. I like placing it against objects vertically so it can look like Blink is stepping through. Awesome idea and one of the best Marvel Legends accessories of 2020. 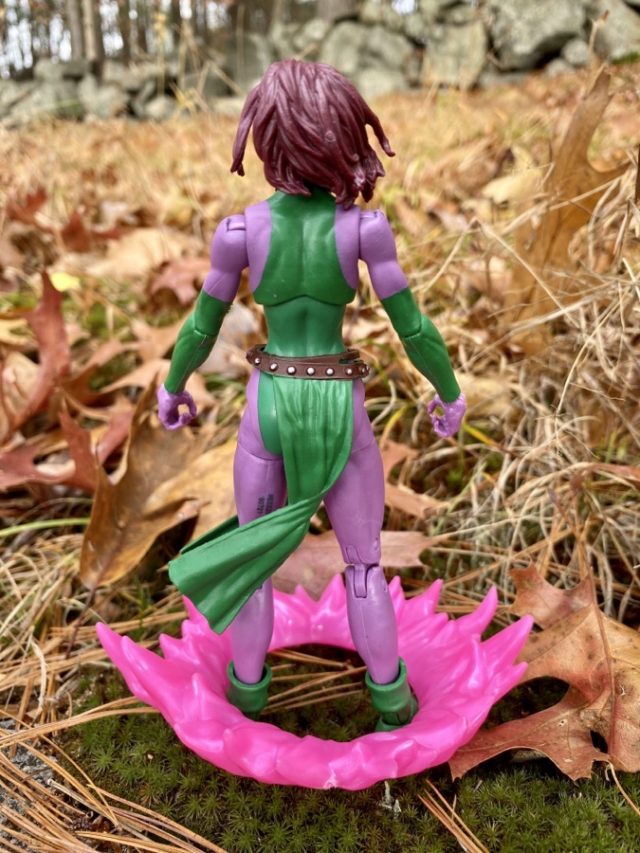 In addition, we’ve got two pink energy javelins that can be dual-wielded if you like. Blink’s hands hold them snugly, although I’ll admit to being disappointed by the achievable throwing poses you can get her arms into due to her standard female articulation. 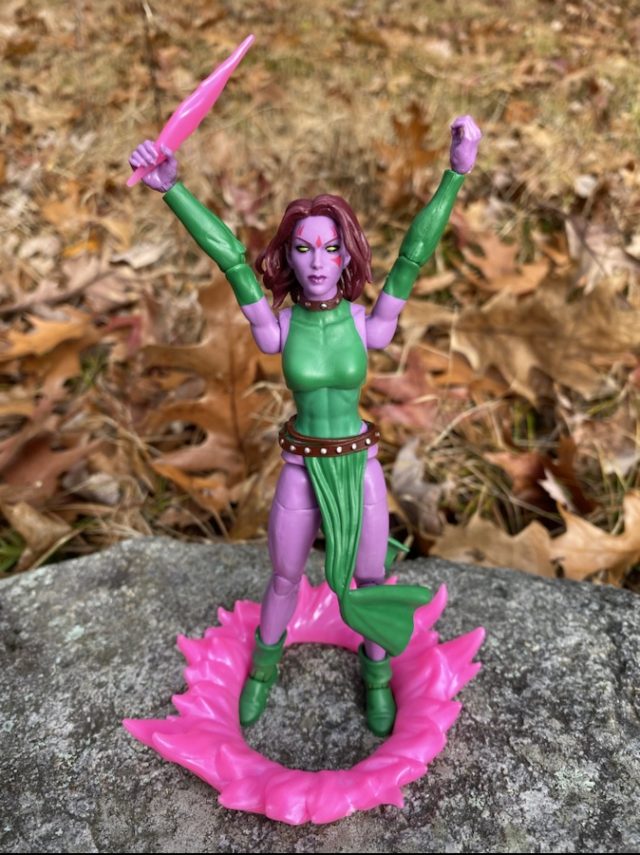 And yup, it’s that time when I complain about the upper body articulation on another female ML figure. The complete articulation scheme on this figure is:

It’s not a terrible articulation scheme, but the lack of double-hinged elbows, swivel thighs/biceps/boots and a swivel waist are keenly felt for a dexterous character like Blink. There’s still some fun to be had with her, but definitely many missed opportunities posing-wise as well that leave her feeling a bit static. 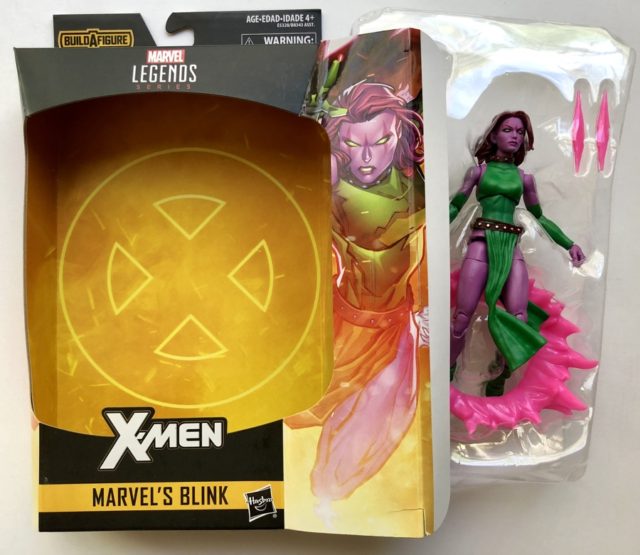 But as I’ve alluded to, my one biggest gripe with this action figure isn’t what it is—but rather, what it’s not. While this is unquestionably a toy of Blink, it’s just not the classic Age of Apocalypse version—it’s the Exiles version. And that means her hair is much longer (as seen in Exiles), her face seems a little older, her body seems a little too big, and she’s missing the quiver for her javelins. 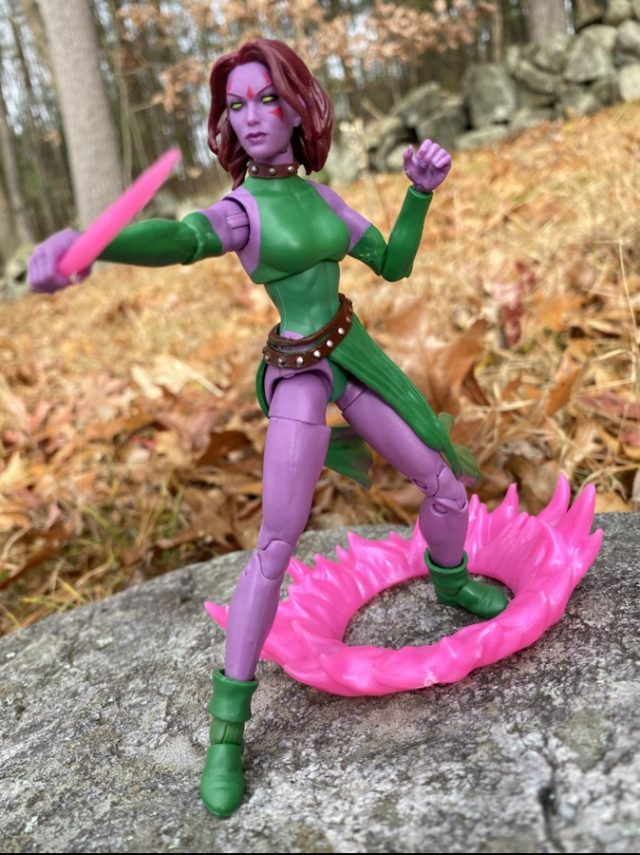 Overall: This is a great figure of Exiles Blink and a very good figure overall, despite not being the most iconic/relevant version of the character. The new accessories are terrific, and I imagine many collectors have bought extras of Blink to procure another teleportation effects ring for Nightcrawler.

Blink’s ultra-loose skirt drives me up the wall, and I’m no fan of the limited upper-body articulation on her (particularly her arms). Even so, I think there’s a lot to love about this Marvel Legends Blink figure—just so long as you’re cool with getting an iteration that’s not quite compatible with the 2020 Marvel Legends X-Men AoA series.