Oftentimes, Hasbro successfully uses a Marvel Legends Build-A-Figure as a proverbial carrot to entice collectors into buying an entire series of figures to build an essential character such as the Kingpin or Sauron. The subject of today’s review… is not one of those characters. The Marvel Legends Super Villains series is bringing us some of the most fan-demanded villains in toy form from across the Marvel Universe, but the BAF is easily the most obscure character in the whole wave. Even so, the Marvel Legends Xemnu Build-A-Figure is still selling for about 80 bucks on the aftermarket. Is this super-articulated niche figure worth those lofty prices? 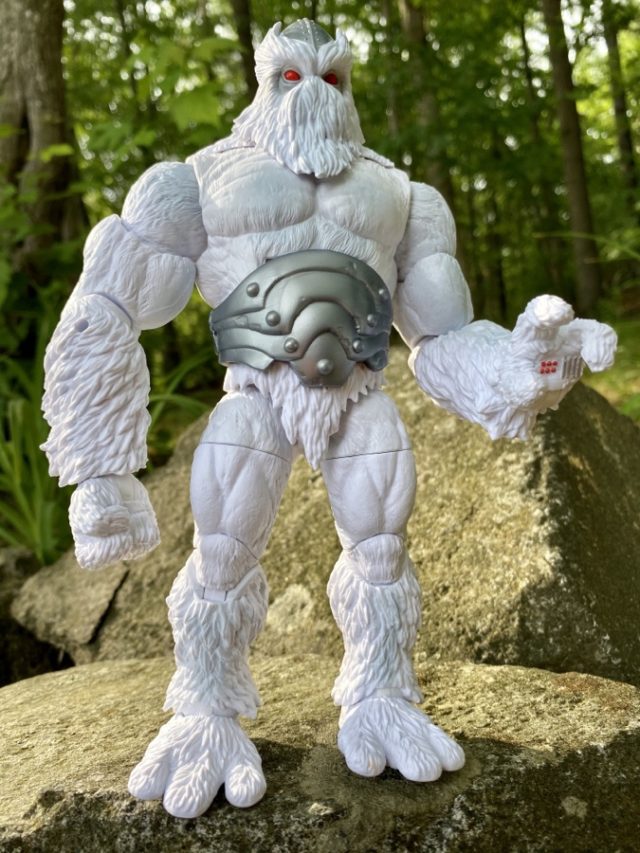 For those who don’t know him, the monster Xemnu is actually among the longest-running characters in the Marvel Universe, with a history that dates back over 60 years to Marvel’s pre-superhero era. He’s shown up quite a bit in recent years and made notable appearances in the Immortal Hulk comic book series, where he was ultimately smashed and killed by Hulk.

So for vintage and modern fans alike, Xemnu is a character of some significance, believe it or not. Maybe not enough for him to anchor a ML wave of his own and convince collectors to buy every figure, but a historic and interesting character nonetheless. But is his toy any good…? 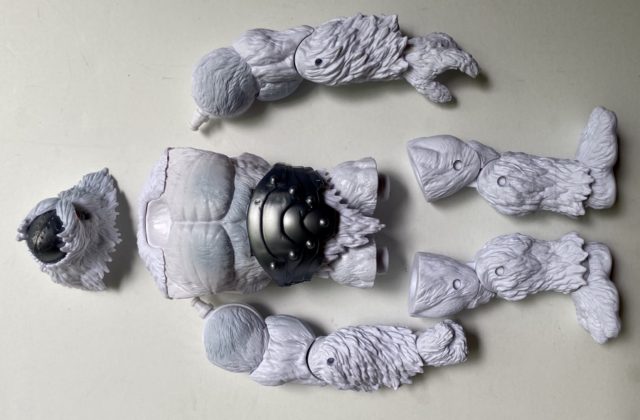 In order to build the Marvel Legends Xemnu BAF, collectors will have to buy six of the seven figures in the Super Villains Legends series (all but God Emperor Doom, who is double-packed and BAF piece-less). Because this is a loaded series that includes characters like Arcade, Dormammu, Lady Deathstrike and classic Red Skull, I think this is a set that’s solid enough that many fans who don’t even know who Xemnu is may end up with all the pieces to build him. 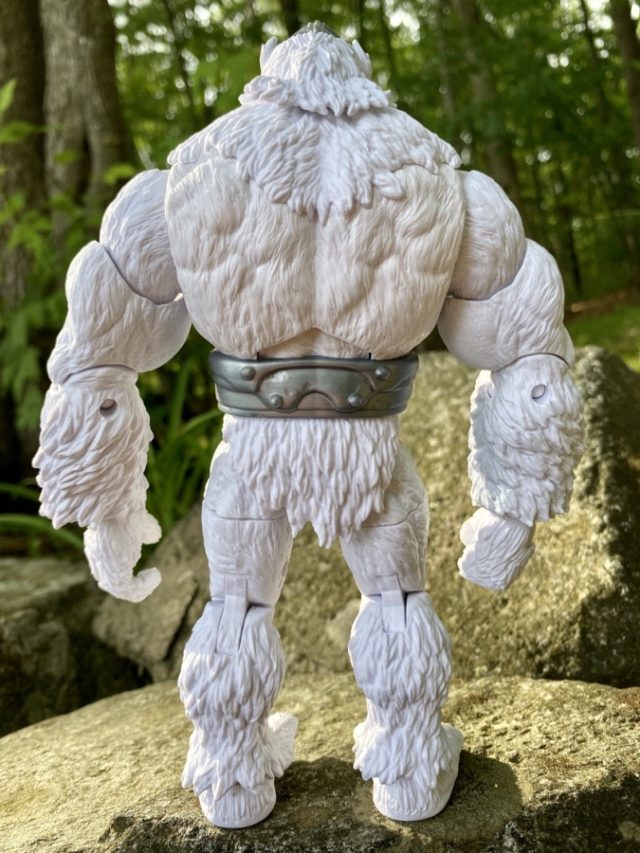 If this Xemnu figure is looking a mite familiar to you, it may be because you’ve seen or owned the Marvel Legends Sasquatch and/or Wendigo BAFs released in recent years. Basically, Hasbro has reused the existing tooling of those figures—effectively—to create a new character that only required a new head, belt, hands and feet. 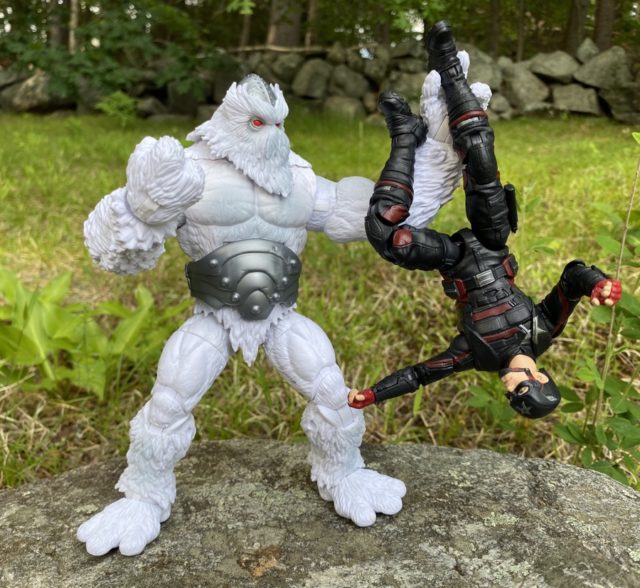 I don’t think that’s necessarily a bad thing—reusing tooling is critical in this day and age to making figures cost out for production. And in this case, ML Xemnu is a really convincing representation of the character. 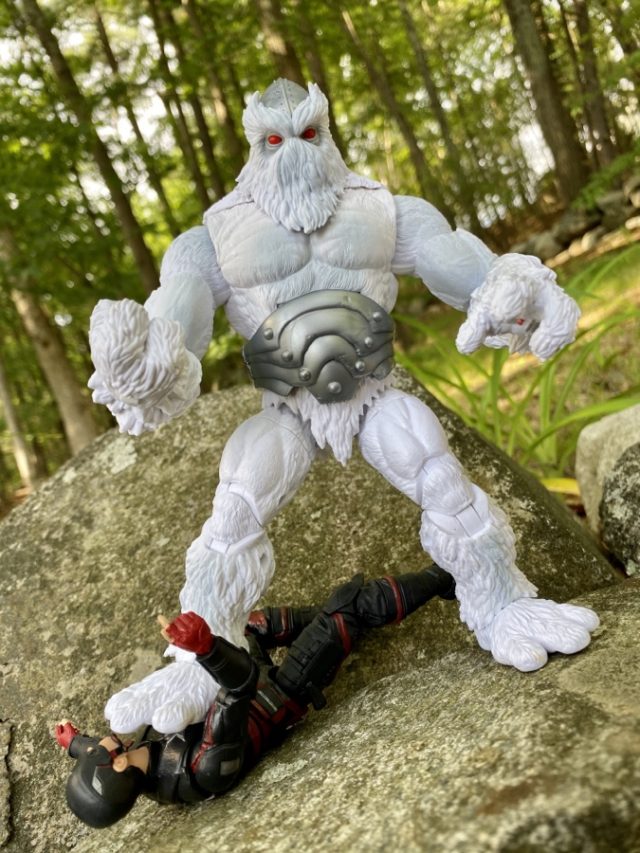 I do think he should have been a little wider and bulkier, which is my main gripe with this figure, but if Hasbro wasn’t going to invest that kind of money in this character (and they were not), I think the toy we got here is about as good as it could be. 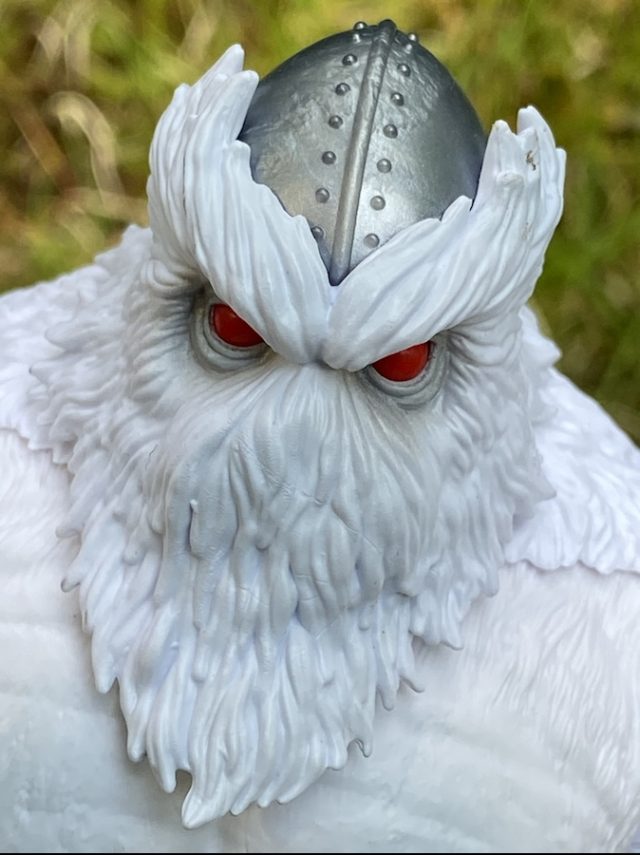 The new head is a wonderful portrait of the character, and gives off both a creepy and fun classic monster vibe. The metal dome atop his head reminds you that something isn’t quite fully-organic about Xemnu, while the red eyes give his otherwise fluffy face a fearsome demeanor. 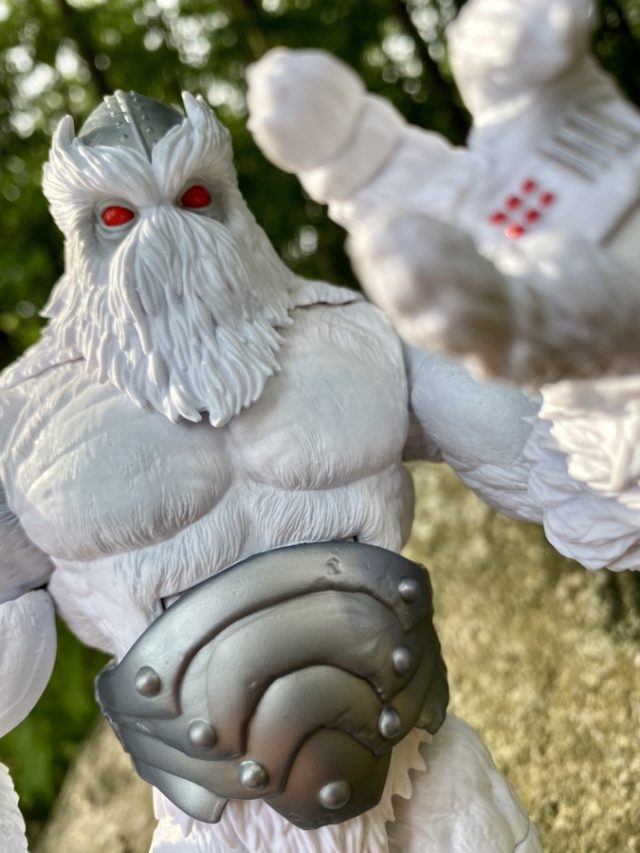 The little red and silver buttons on the inside of Xemnu’s left hand are a fantastic touch that I’m really glad Hasbro managed to incorporate, as they further establish that Xemnu is a cybernetic being and not just another Bigfoot creature. The right fist was also a must, since Xemnu ultimately can rely on punching the crap out of most enemies. 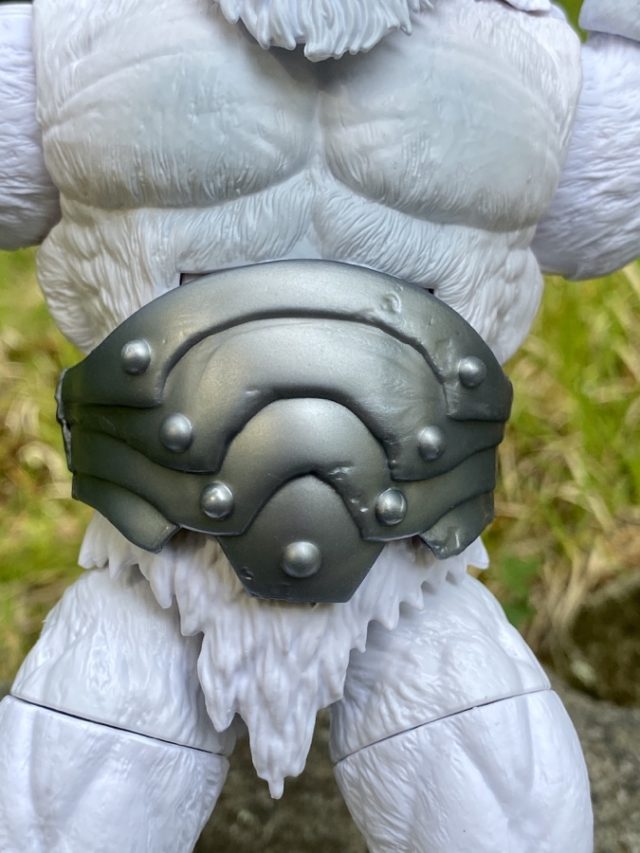 The thick metal belt around Xemnu’s waist and his three-toed feet both give him a touch of silliness, but they have been well-sculpted and executed nicely. It’s not Xemnu’s fault that his character design has a few wacky elements to it. 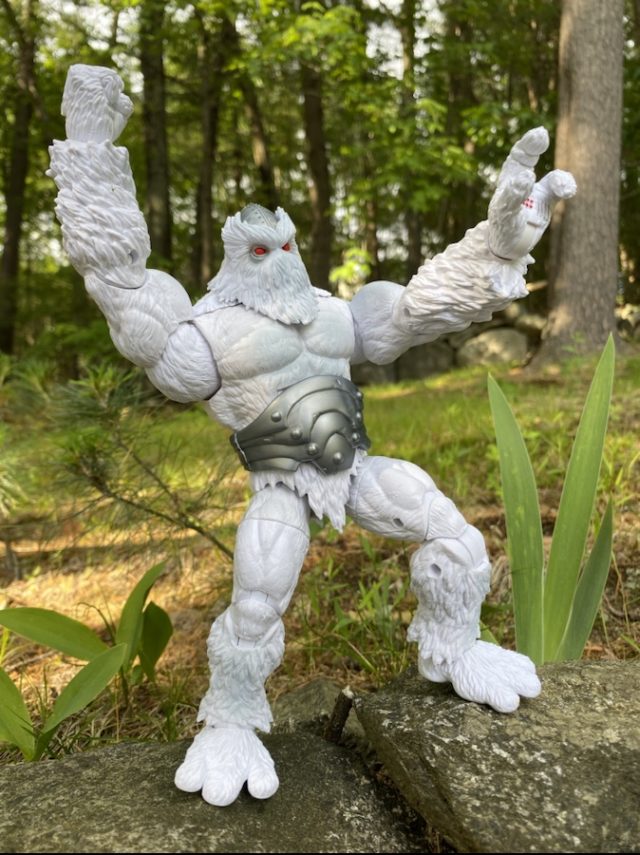 Articulation-wise, the Xemnu Marvel Legends figure features exactly the articulation scheme that owners of Wendigo or Sasquatch would expect: 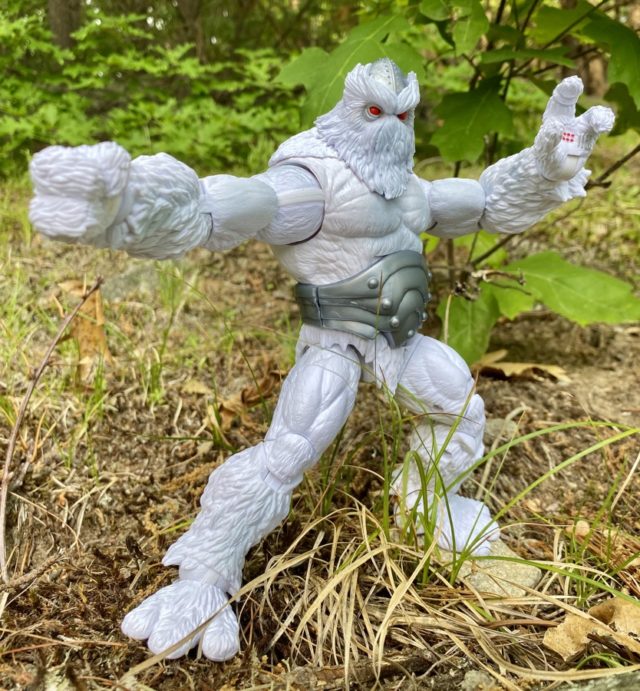 The limited range of motion on the head is a real pain, but the ab crunch is also almost totally unusable because of the belt. The feet also don’t have quite as large a range of motion as I’d prefer. This isn’t a huge hindrance because Xemnu shouldn’t exactly be busting out Nightcrawler-like acrobatic poses anyway, but I think it’s always worth noting areas where a Hasbro figure falls short of the usual super-articulated standards. 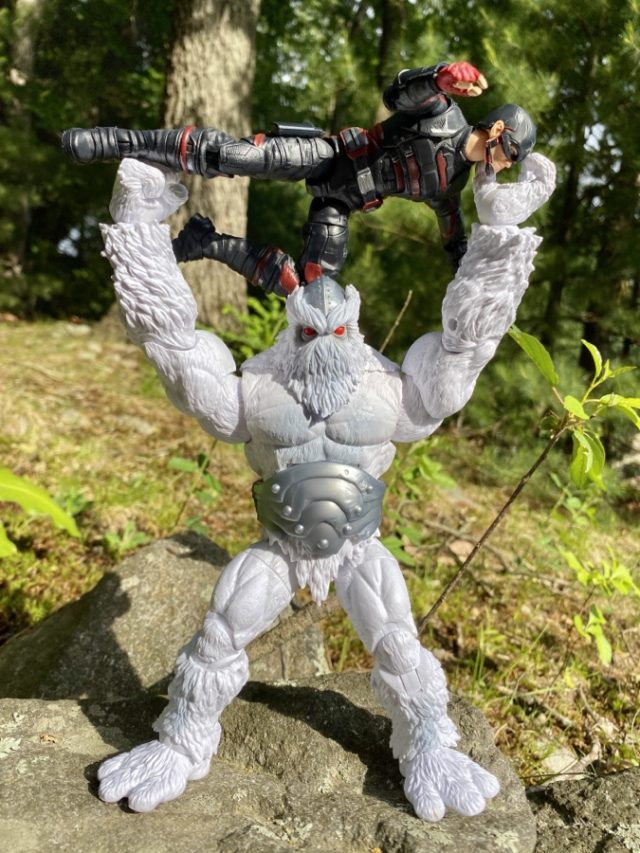 Quality-wise, this figure is a winner. Xemnu assembled without a fuss, the pieces all stay together well, he feels heavy and solid without any weak joints (he can easily hold up a standard figure like the new U.S. Agent), and the paint apps (limited as they are) are all on-point. The Hasbro QC team did their job well with this guy—which is good, since odds are this is the only Xemnu action figure that is ever gonna be made. Ever. 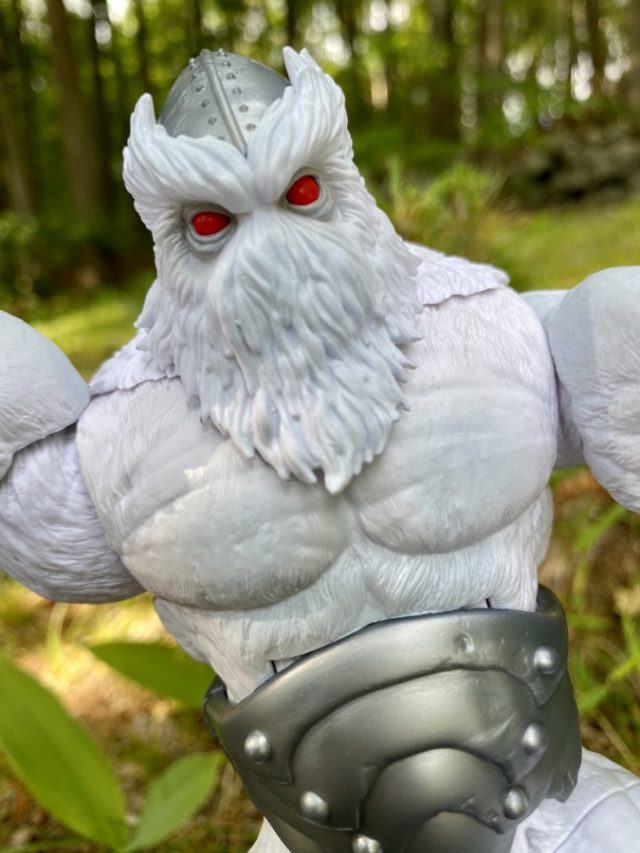 I am not a super-fan of this character and would complain mightily if I thought there was anything to nitpick here, but I think Hasbro has really nailed this character. Not at all a character I would have campaigned for—certainly not as a BAF—but he’s been done and done well. Boring to review, but enjoyable to build, play with and display. 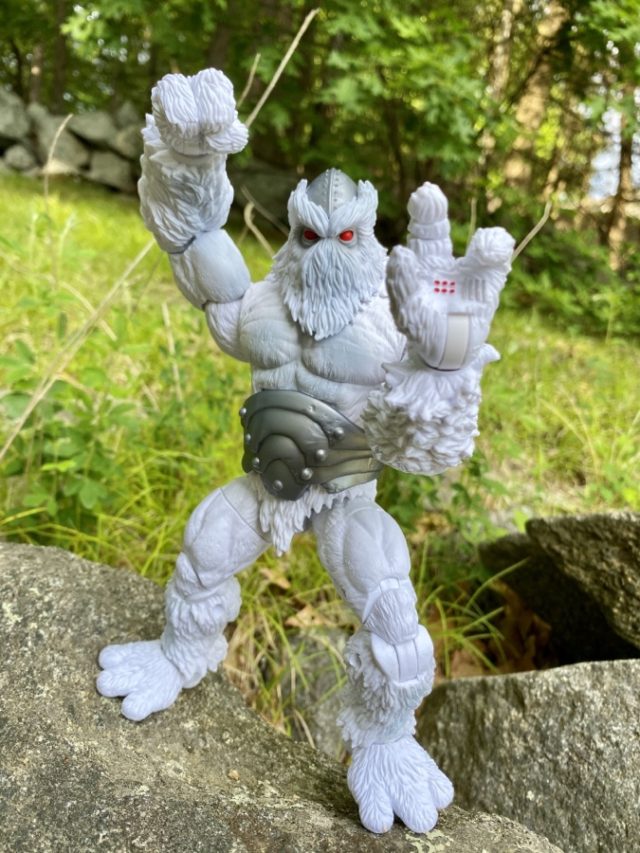 Overall: I wasn’t exactly chomping at the bit for Hasbro to release a Marvel Legends Xemnu Build-A-Figures—or to review him—but now that I’ve got him in-hand, I think he’s another in a long line of outstanding toys Hasbro has made of less-than-mainstream characters. Despite reusing a lot of existing parts, Xemnu’s new parts are all excellent and his paint, quality and the majority of the articulation are all up to snuff.

The neck, ab crunch and feet could all have used improved range of motion and I would have liked to see Xemnu a bit stockier—with wider shoulders and a bit more bulk—but this is a suitable representation of many of his appearances. Immortal Hulk fans and Jack Kirby monster fans alike are going to dig this figure, as Xemnu gets a definitive figure that we are unlikely to ever see surpassed. A basic Build-A-Figure, but a good one.