My 2020 Deadpool and X-Force Marvel Legends Strong Guy Series figures have started to arrive, so I’ve finally got the motivation I needed to finish off my reviews of the Age of Apocalypse series. Today I’m looking at a figure that I was hyped for the moment it was announced–but has ended up being the pegwarmer of the series! You can get X-Men Marvel Legends Morph for 15 bucks shipped online–is he worth snagging at that discounted price (even if just for the Sugar Man BAF piece)? 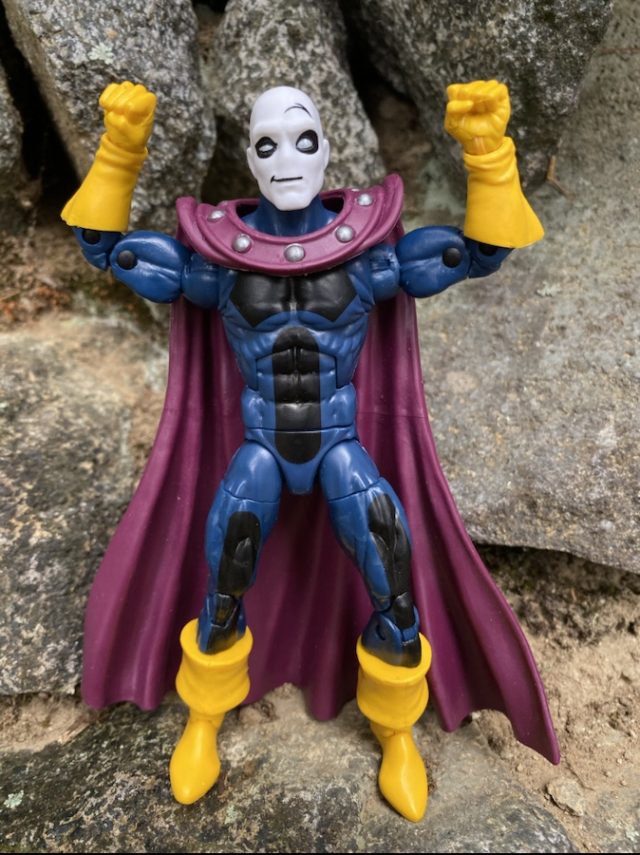 When the 1992 X-Men cartoon started aired when I was a kiddo, I wasn’t the hardcore X-Men fan then that I am today. So the X-Men animated series was my first exposure to Morph (Changeling), a shapeshifting funny man who quickly captured my heart.

Evidently, Morph’s appearance there caught the attention of the X-Men writers at Marvel as well, as the character was a surprise major inclusion in the X-Men Age of Apocalypse roster, and then went on to be one of the mainstays of the Exiles soon after. 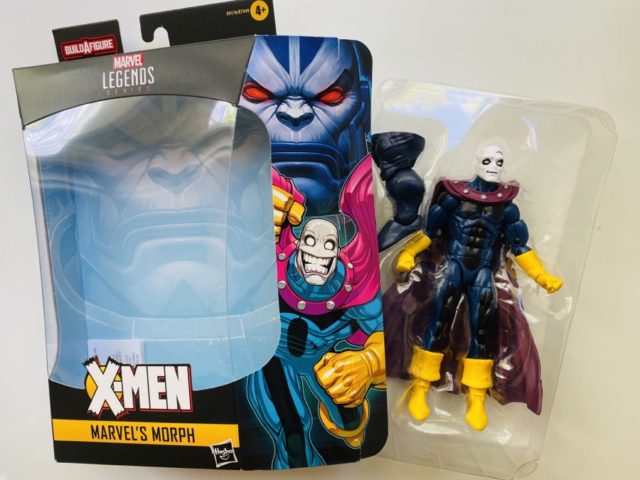 While there was a bizarre Toybiz Toyfare Exclusive AOA Morph figure decades back, Hasbro is finally delivering an official 6″ version of the character to fans as part of the Sugar Man wave! Was he worth waiting all these years for? 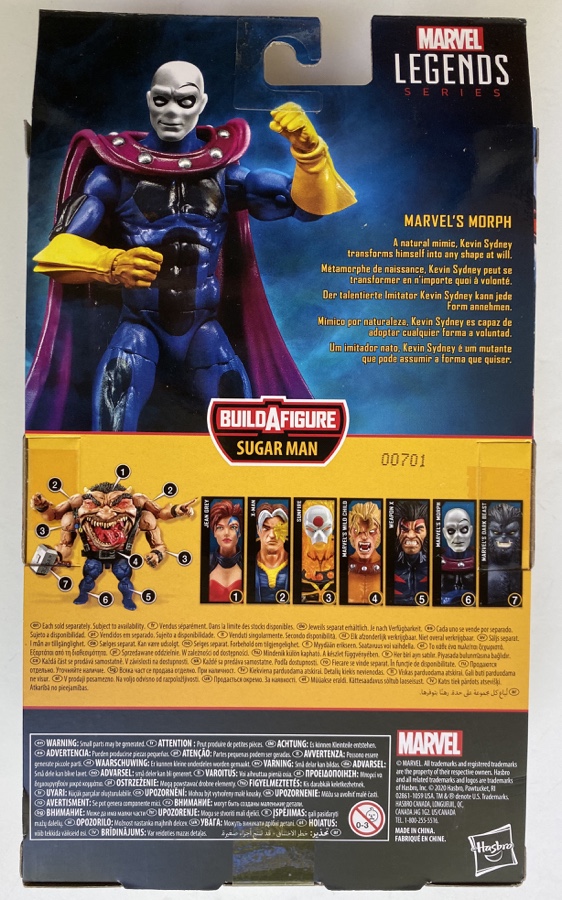 Well, unfortunately… I would have to say “Not exactly”. There are some issues that really drag this Marvel Legends Morph figure down for me, which is a real bummer since I was looking forward to him so much. 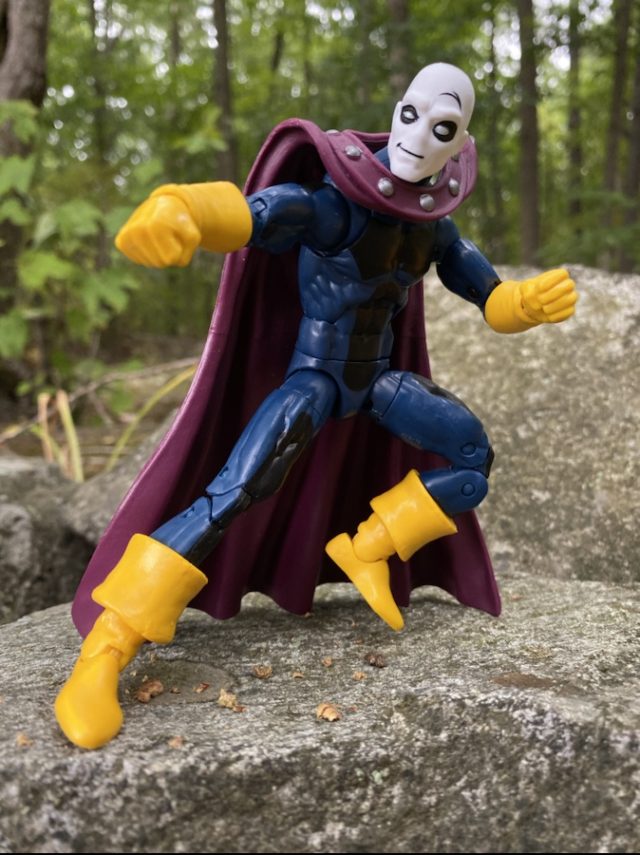 First off–and perhaps most damning to me–this figure just is not quite accurate color-wise. In the Age of Apocalypse, Morph wears a bright blue costume with a navy design in the middle, but Hasbro chose a super dark blue as the primary color for this figure with black in the middle. Consequently, the costume here looks totally off to my eye, despite the sculpting itself being mostly accurately done (although Morph’s yellow kneepads are also totally absent). 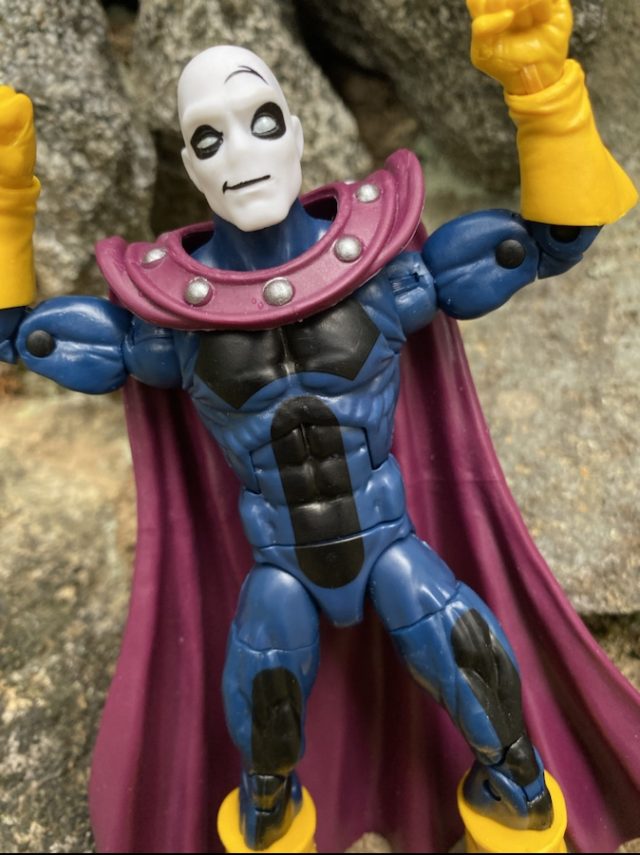 In addition, Hasbro opted to go with with the heavily-shadowed eyes look for Morph, which–similar to the Blink figure I previously complained about–is much more closely associated with the Exiles version of the character than the AOA one. The portrait just doesn’t say “Age of Apocalypse” to me the way it should, which isn’t acceptable to me in an actual Age of Apocalypse figures series. 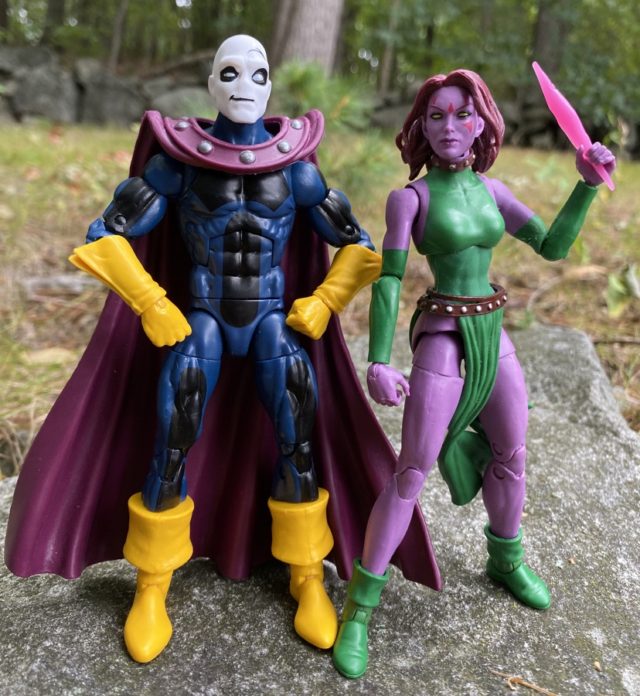 The cape is wonderfully sculpted, and I wouldn’t be at all surprised to see it recycled for an Age of Apocalypse Magneto Legends figure sooner than later–but it also has problems. It should be more magenta than dark purple for an AOA version, IMO, although I can live with the color chosen. 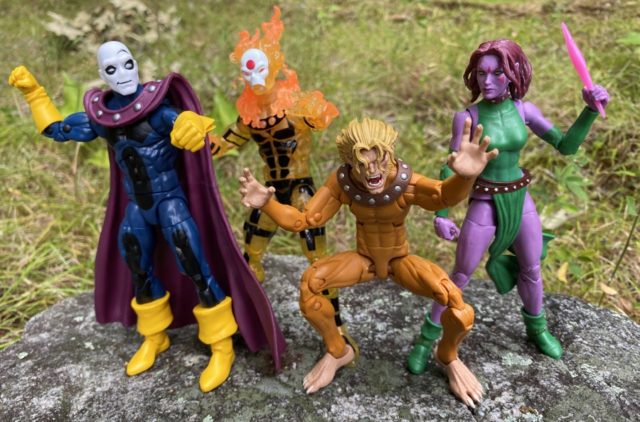 What I can’t live with is how cheap and gummy the peg on the cape is–it’s constantly falling out immediately, and the cape is so heavy that it often makes the figure back-heavy enough to just crumble backwards. The painted circles look great, but the cape itself can be a real pain the butt to attach firmly and pose in spite of. 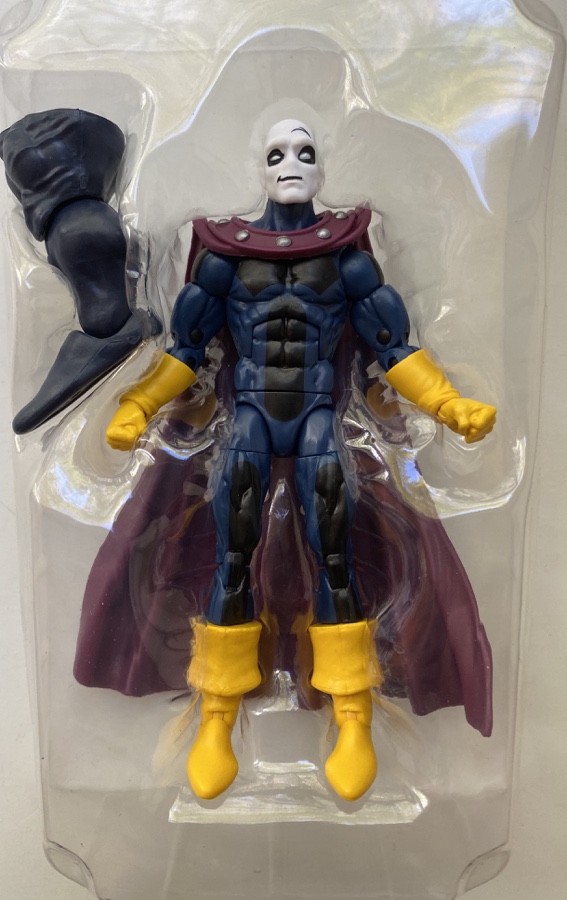 As far as accessories go–there’s bupkis besides the removable cape (which I would love far more if it was not removable) and the Sugar Man Build-A-Figure right leg. For a shapeshifter to get no alternate heads or transforming parts of any kind really sucks–particularly when I don’t think the interpretation of the one head we did get is correct to the storyline. Some shape-shifting heads or a comedic/joke head or handheld accessory would have gone a long way to making this figure more amusing. 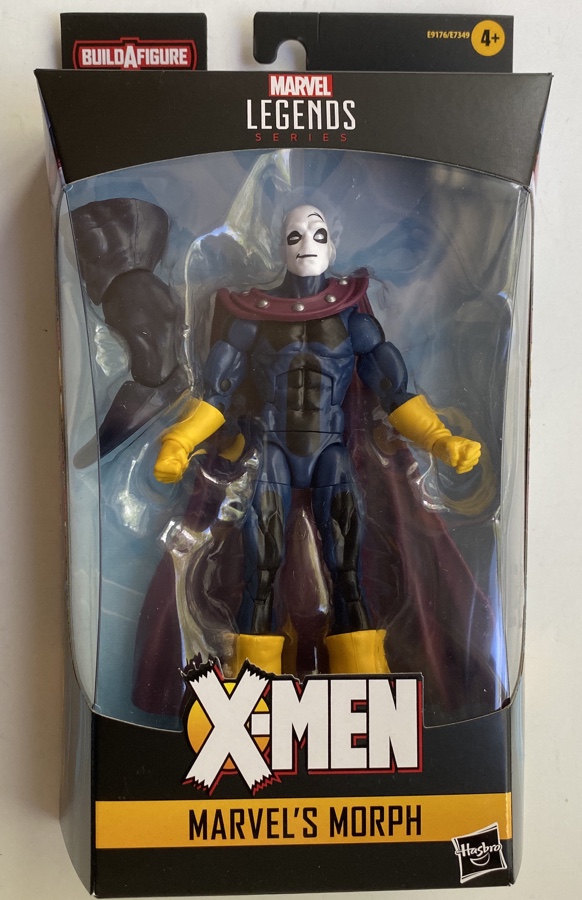 On the bright side, the designs on the costume are correct (albeit in colors I don’t agree with), and I think the yellow boots and gloves chosen work really well. 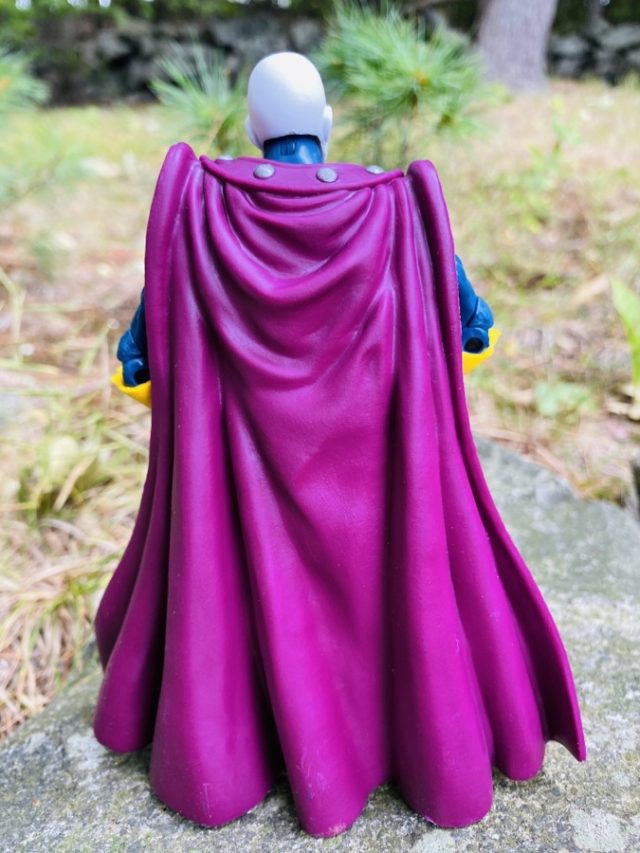 The heavy cape is a major imposition to the articulation, but the usual super-articulation scheme is still present–it’s just hard to get X-Men Legends Morph into dynamic poses because of the heavy rigid cape. The articulation set consists of: 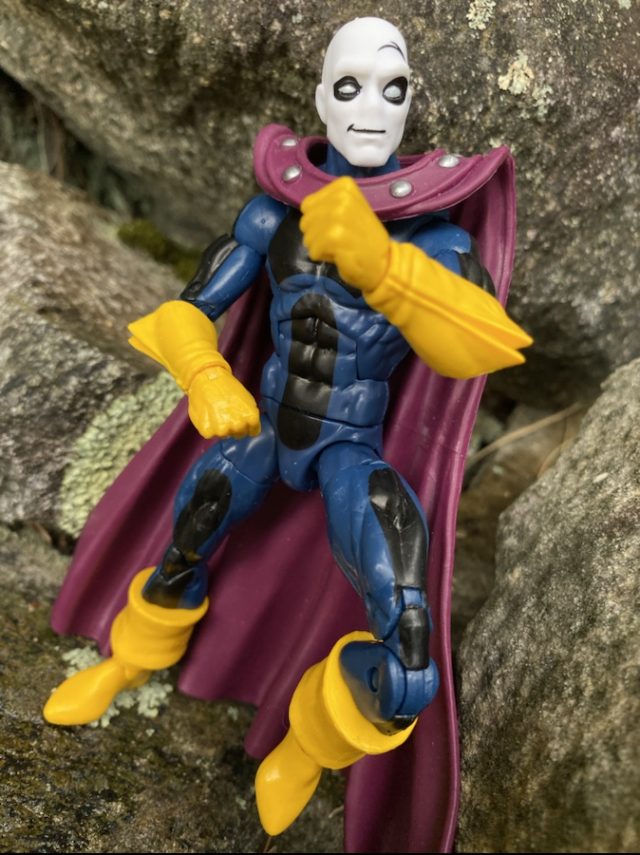 The butterfly swivels on the shoulders are greatly appreciated, and probably my favorite little detail about the figure’s articulation scheme. Not being able to really do any crouched or dynamic poses because of the cape is a real imposition, though. 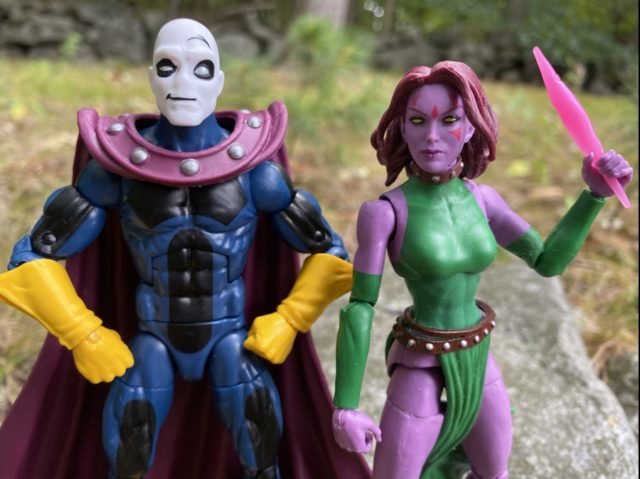 Overall: It breaks my heart to say it, as Morph is one of my favorite X-Men Age of Apocalypse figures–but this figure truly is not my jam. I think the portrait and color scheme are both bad matches for the AOA Morph character design, as is the omission of the kneepads. This simply does not feel like Age of Apocalypse Morph to me, and that’s tough to get past.

The purple cape’s rubbery material and refusal to stay put is an annoyance, and its weight and non-functionality are an imposition to posing Morph. The lack of any accessories or interchangeable parts at all for a shape-shifter is also baffling.

For a character whose defining trait is being fun and funny, it’s a total disappointment to me that this figure just is not very fun at all. A rare misfire in the X-Men Legends line in my eyes. I’m glad we finally got a Morph Legends figure, but I think this could be revisited and done much better.