Over the years, Hasbro has released many of the biggest and baddest villains in the Marvel Universe as Build-A-Figures. From Thanos and Rhino to Sauron and Apocalypse, we’ve gotten iconic villain after villain in BAF form. And now… we have a Marvel Legends Stilt-Man Build-A-Figure that can be assembled by buying the first Marvel Legends 2021 Spider-Man Series. I never expected we’d see a toy of this character beyond a Minimates figure, but here he is. This is likely to be the only 6” Stilt-Man action figure ever made. Is it a great one? 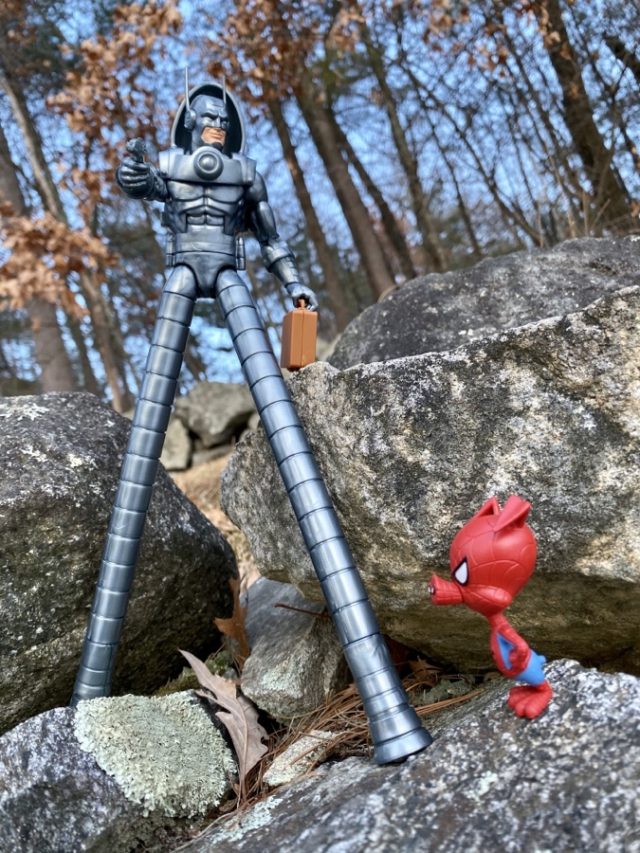 Although Stilt-Man isn’t exactly the household name that dozens of other Marvel villains have become, he’s actually a character with a comic book history that goes back over 55 years. That’s right, there is over half a century’s demand pent-up from Stilt-Man fans, just waiting for a super-articulated version of this not-quite-iconic supervillain to be produced.

And now that we’re in a golden age where virtually any Marvel hero or villain ever is truly possible in action figure form, Hasbro has answered the call with what has to be one of the unexpected highlights of the Marvel Legends 2021 lineup so far! Let’s get into the review… 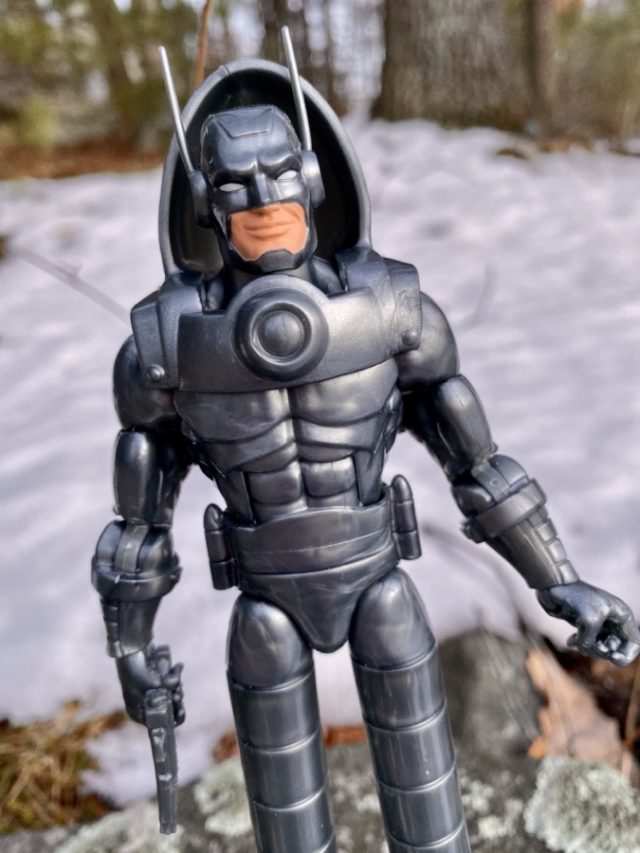 We might as well start at the top, so let’s look at the Marvel Legends Stilt-Man Build-A-Figure head sculpt. While Stilt-Man has often been portrayed as a serious and deadly foe, I like that Hasbro gave him a personality-rich smirk that can be interpreted either comically or cockily. I’m sick to death of vacant stares, so this smirk is a big winner with me.

The metal carapace behind his head is present to stop Punisher from sniping him from behind, and I appreciate the whited-out eyes and lining atop his head. It’s an effective well-done head overall. 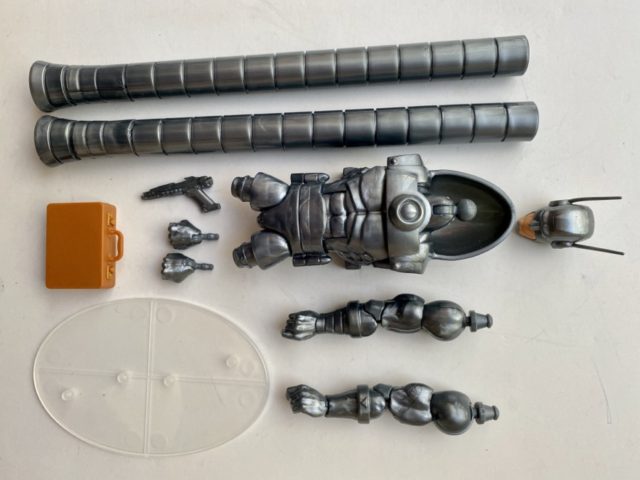 I’m not going to penalize Hasbro for including them—because they are present on a valid modern version of Stilt-Man’s costume—but I do think it’s a little weird Hasbro chose to go with a Stilt-Man head with antennas on the side of his mask. These generally aren’t present in classic or most modern depictions of the character, so it’s an odd decision. I actually like what the antennae add visually, so that’s a plus—but some fans may want to customize and cut these appendages off. 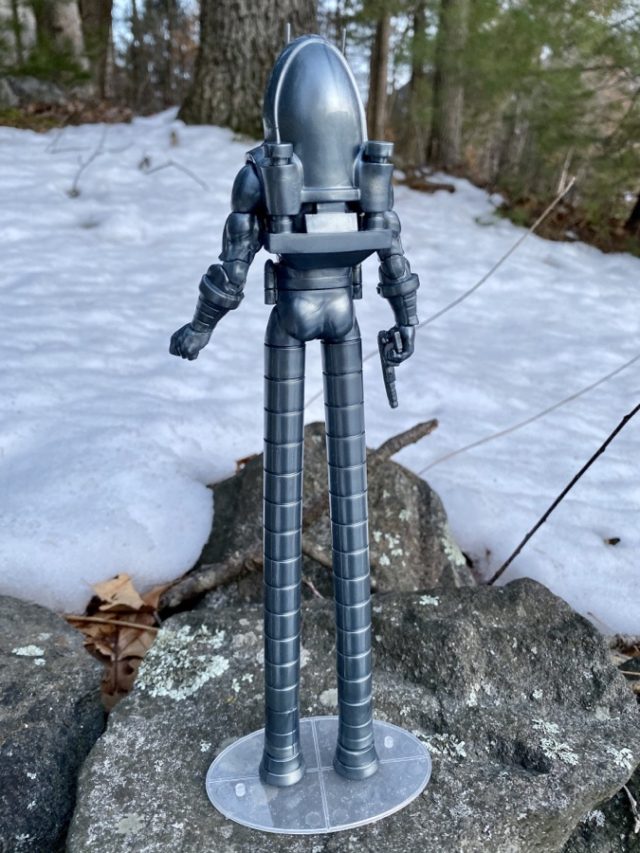 The highlights of the torso include the sculpted backpack/battle armor add-on piece that the carapace rises out of, as well as an interesting-looking belt around his waist. The forearm armor is also pretty neat. For a villain that regularly gets made fun of to a humongous extent, it turns out Stilt-Man can actually look pretty cool. 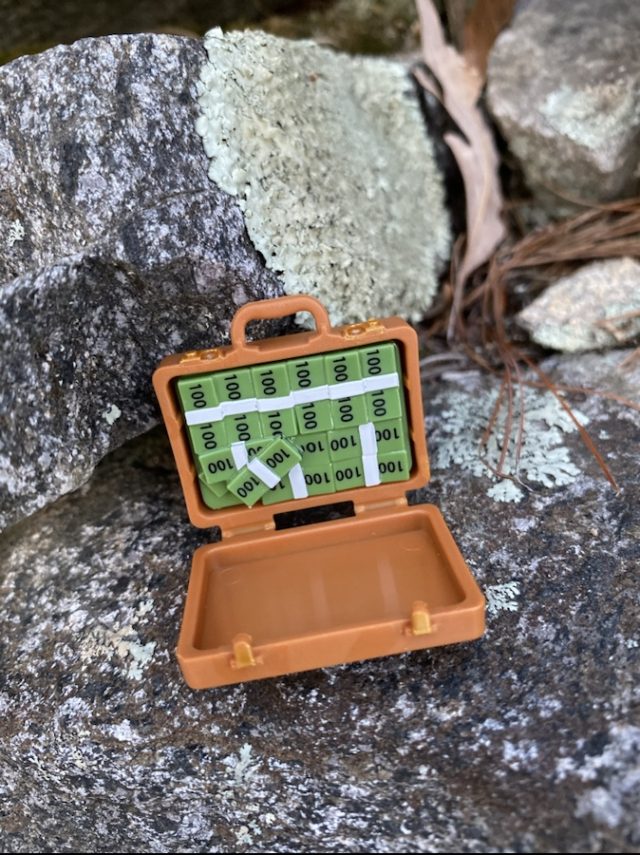 Accessories for this 2021 Marvel Legends Build-A-Figure include a gun and briefcase that fit perfectly into his “grabbing” hands, as well as a clear figure stand (that I’ll talk about in a bit) and a pair of interchangeable fists (that I somehow forgot to take photos with).

The fists don’t seem terribly useful to me since few heroes will ever be up at Stilt-Man’s height exchanging punches with him, but the gun is a great add-on to have and the briefcase full of money is a fantastic bonus. The briefcase is a swell complement to many street-level villains, but I really dig how Stilt-Man looks while holding it. 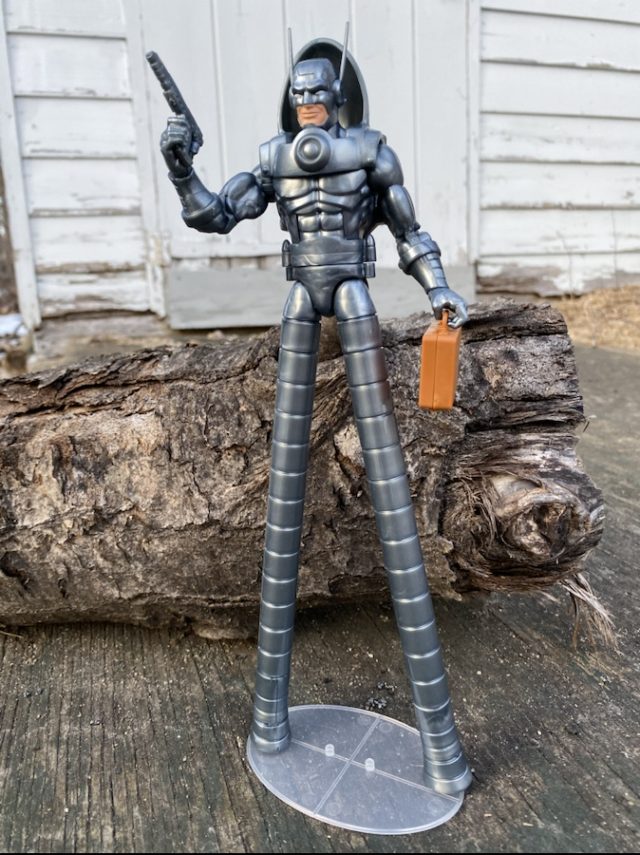 The lower body of Stilt-Man is, of course, his signature hydraulic telescopic legs. These are about 8” long all by themselves—and in one of Hasbro’s most genius moves ever, can be expanded by buying more Hand Ninja army-builders with additional leg extensions. Booyah.

For the purpose of this review, I’m discussing the plain-jane Stilt-Man BAF with one set of legs. Be aware that if you buy more Hand Ninjas for more leg extenders, your figure will need additional support (and frankly, it’s hard balancing him with just one pair of legs and the stand ). 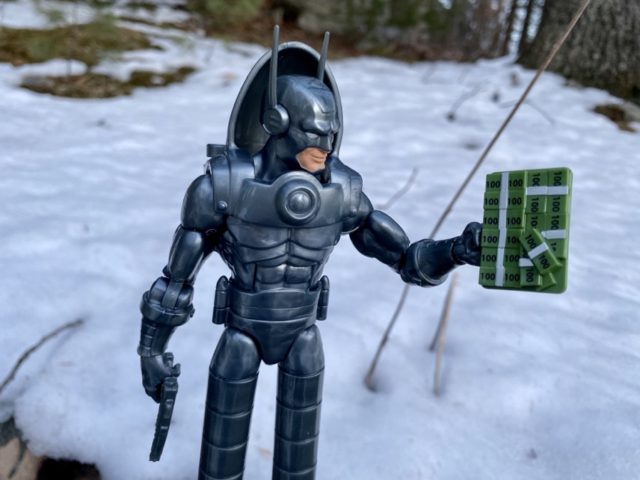 The legs themselves are ball-jointed on the hips and each leg has two points of articulation: swivel “thighs” (which serve no purpose as far as I can tell since the legs are perfectly circular) and hinged “feet”.

The biggest issue I have with this Stilt-Man BAF is the fact that it is ridiculously difficult to get him to stand up in walking/dynamic poses—even when you are using the included figure stand, which just isn’t robust enough to handle all the weight of this figure in a non-museum pose. 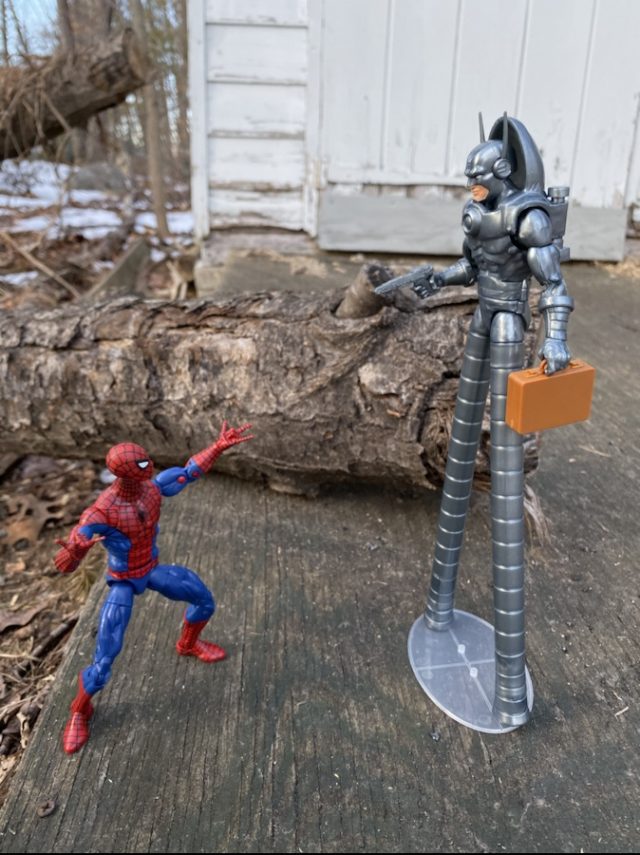 The “feet” at the bottom of the stilt legs have a hinge on them, but even so, you can’t really pose the “feet” with a wide enough range of motion to make this guy really balance well in the vast, vast majority of cases—and that’s when he’s at his most stable with only one pair of legs!

And as much as I like the sculpting work on this BAF and the silvery-grey plastic color that Hasbro chosen that covers the vast majority of the figure, I do think that the details could have been greatly enhanced with even a slight paint wash. 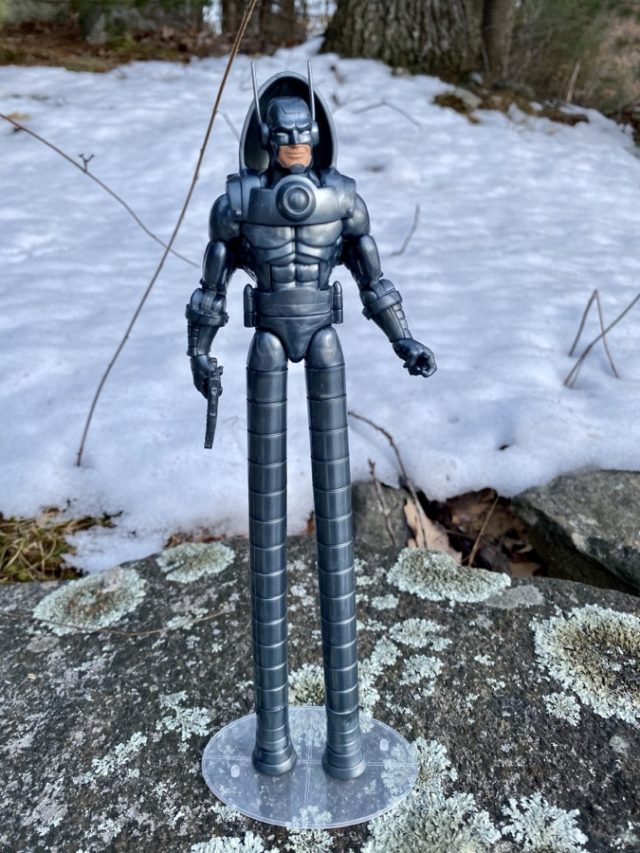 The straight-up molded plastic without paint deco (besides the lower face and eyes on the head) leaves this figure looking a bit too “plastic toy” for my tastes—a hurdle that other ML have conquered with just a bit of paint wash deco. Stilt-Man still looks nice as-is, mind you—but I do think he could look better with a minimal amount of paint apps added. 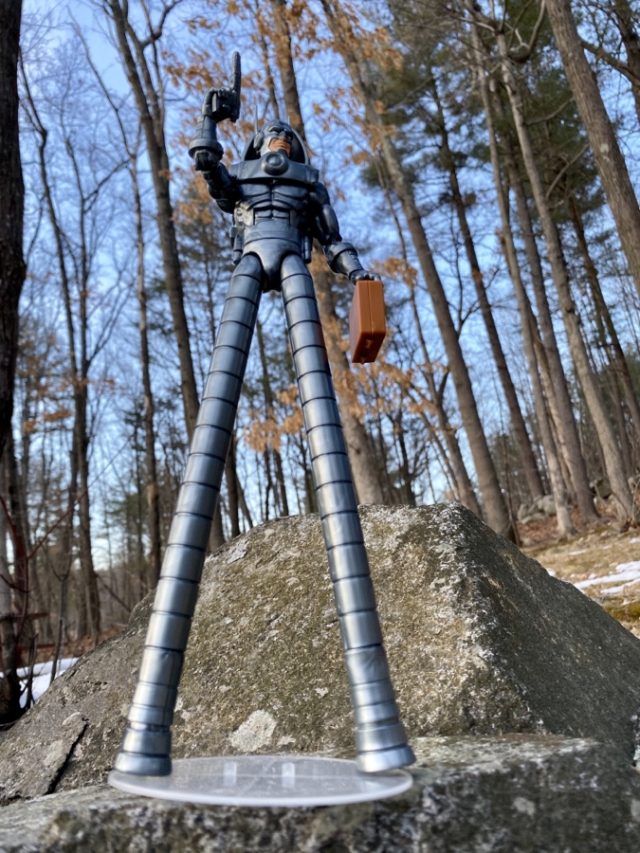 Overall: Stilt-Man is certainly not the most articulated or poseable Marvel Legends Build-A-Figure that there’s ever been, but there’s no denying that it’s one of the absolute most unique. The sculpt itself is descent enough (with a great head sculpt), and I love the inclusions of the gun, stand, briefcase full of money and interchangeable fists.

On the flip-side, I think designing the “feet” to better rocker joints would have gone a long, long way to facilitating more and cooler poses with this guy. As it is, you’re really sorry of limited in how the Stilt-Man BAF can be posed stably, which is a shame given how cool the gimmick is (especially with the option to add more leg extenders). I also think a slight paint wash would have made this figure look a bit less “plastic”.

All that said, this is a wild and crazy character for Hasbro to tackle, and I think they nailed it… for the most part. This is an awesome toy the lines of which Stilt-Man fans are likely to never see again.