Although he’s universally-loved and in the upper-echelon X-Men popularity with fans, we haven’t gotten an official Marvel Legends Nightcrawler figure since the Toybiz Galactus wave in 2005. Wild! That was a terrific figure that stands the test of time, but Hasbro was finally ready to release their own Kurt Wagner this year! Despite being two per case, this Nightcrawler figure is selling out rapidly in stores and online! Is X-Force Marvel Legends Nightcrawler as good as the hype would have you believe? 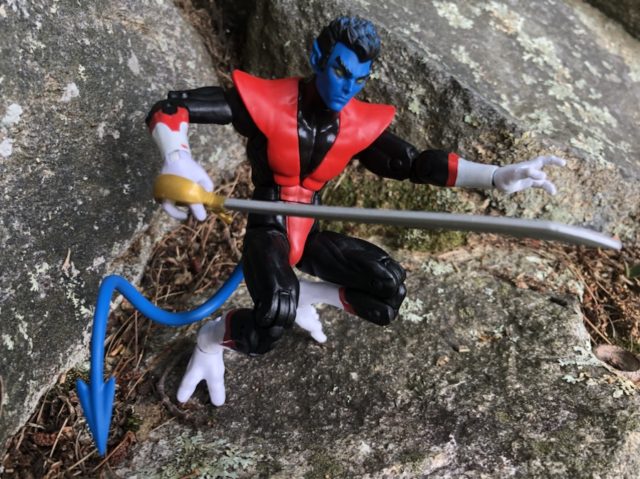 Hasbro has been servicing X-Men fans like never before the last few years, and so it was only a matter of time until they got around to releasing everyone’s favorite fuzzy elf himself—Nightcrawler!

Nightcrawler is a character that requires a lot of expensive unique tooling to create, so we don’t see him nearly as often in lineups as we do characters that can use a more common set of tooling. Hasbro is unlikely to redo many of these molds used for this figure anytime soon for that reason, so hopefully they got them right! Did they? 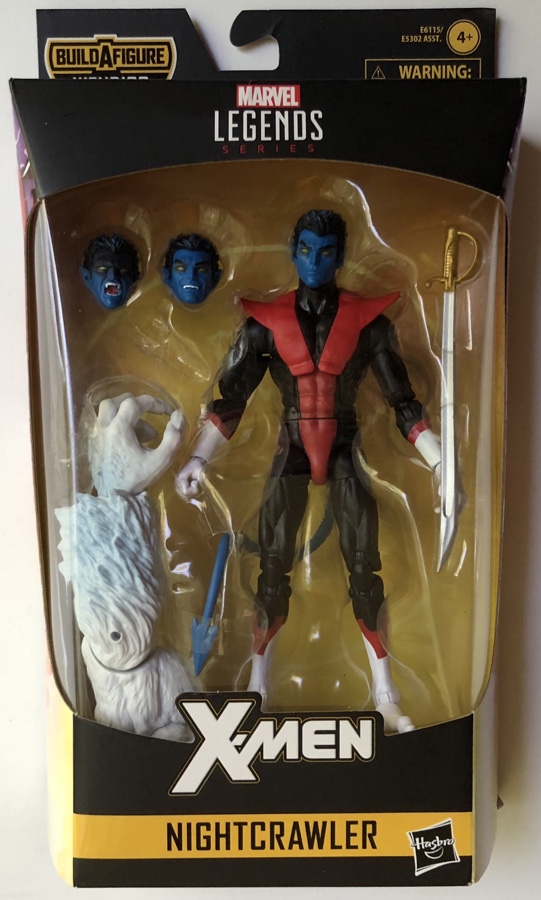 By and large, I would say that this X-Force Legends Nightcrawler figure is a whopping success. He’s got a strong articulation scheme with excellent ranges of motion on the joints, a generous set of accessories (including three heads—more on that in a bit), and a solid sculpt with accurate detailing and proper proportions. 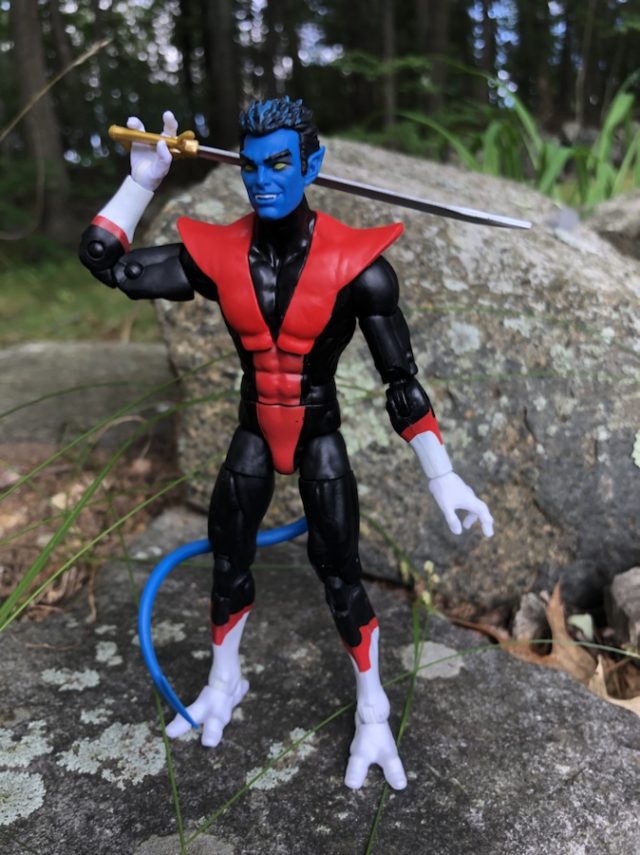 One thing that’s a little weird about this release is that this is an action figure of an actual member of X-Force, being released as part of the X-Force Marvel Legends series… in his non-X-Force classic costume.

Honestly, this is a bit of a surprise, as traditionally Hasbro would give us a more obscure costume choice for a character and then save the classic/most-requested version for later on. But nope! Sorry Grey costume Nightcrawler fans—this is the iconic red and black costumed Nightcrawler through-and-through! 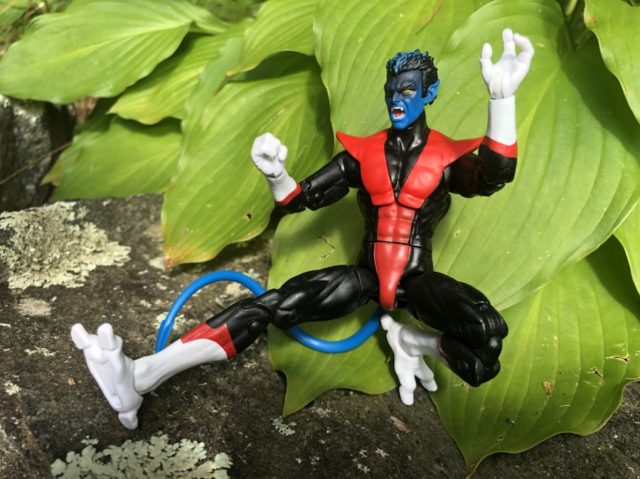 While Nightcrawler wasn’t part of either Jim Lee X-Men Team (he was on the roster of Excalibur at the time), he’s a universally loved character that fans will want a figure of from that same era. I hope we do get an X-Force Nightcrawler Legends figure at some point—the grey costume is slick!—but if we only get one version, I’m glad it’s this one.

It’s difficult to get red paint on Black perfect, but the lines are mostly clean on my figure. The upper upper torso uses red plastic to get a bright red than the lower parts of the body, but the colors look good overall. There’s one anomalous glob of red paint on my figure’s white right hand, so I’m going to exchange mine when I have the opportunity. 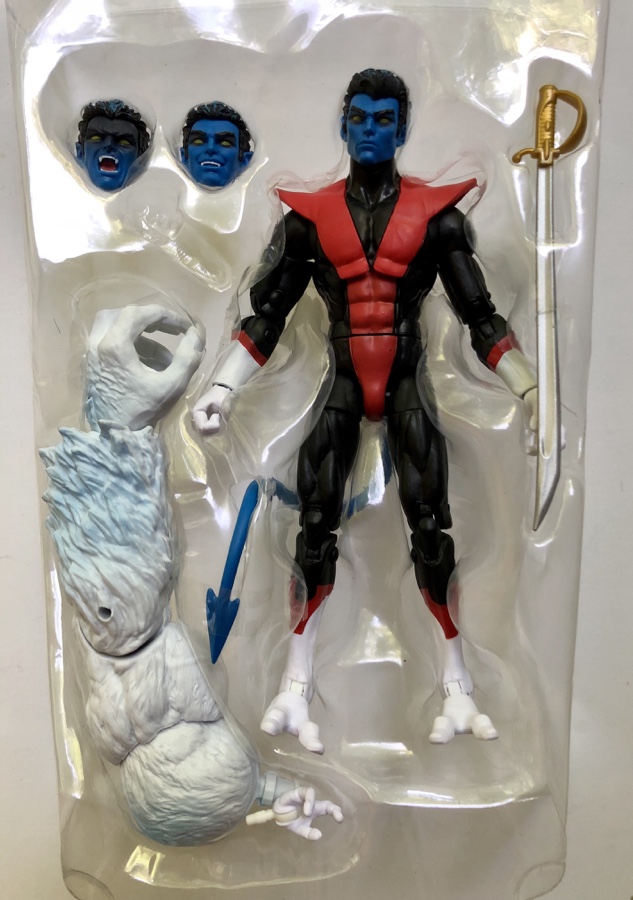 My favorite thing about this figure is actually the fact that it comes with three—count ‘em, three—unique head sculpts! There’s a stoic/neutral portrait, an angry/yelling portrait and a jovial/smiling portrait. 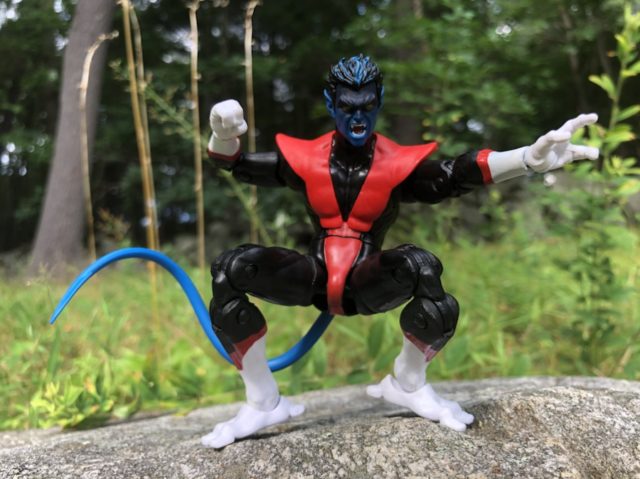 All three heads look like they popped straight out of some classic Dave Cockrum artwork, and I am totally pleased with the look of them all. I expected the cheerful head to be my favorite, but in actuality I think the neutral expression works well for pretty much any situation. All are nice, though! 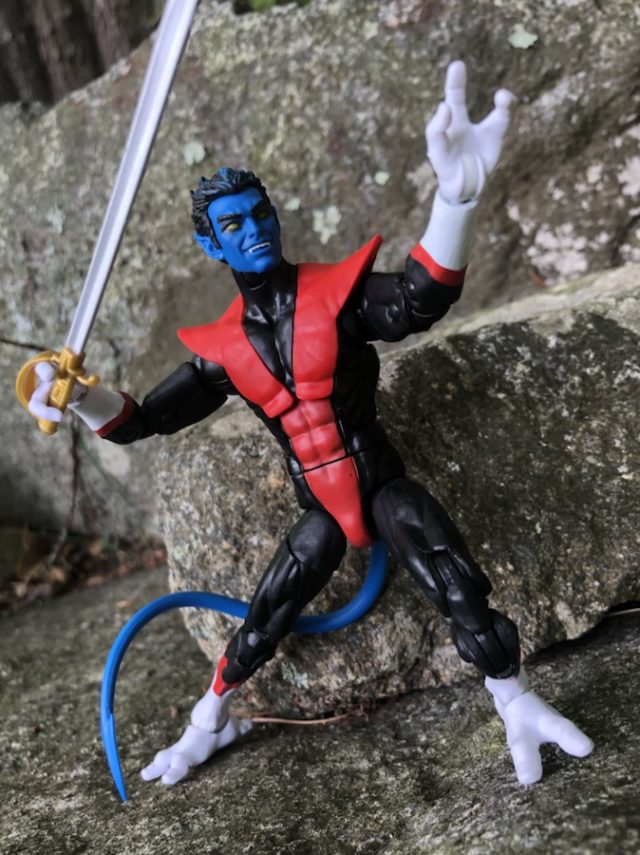 There’s also a sword and an interchangeable sword-grasping hand included (the standard right hand is a sort of fist). Kurt is a swashbuckler, so this is a much-appreciated inclusion. Mine can’t hold the sword properly tightly, but I can get it to stay in his hand incorrectly. 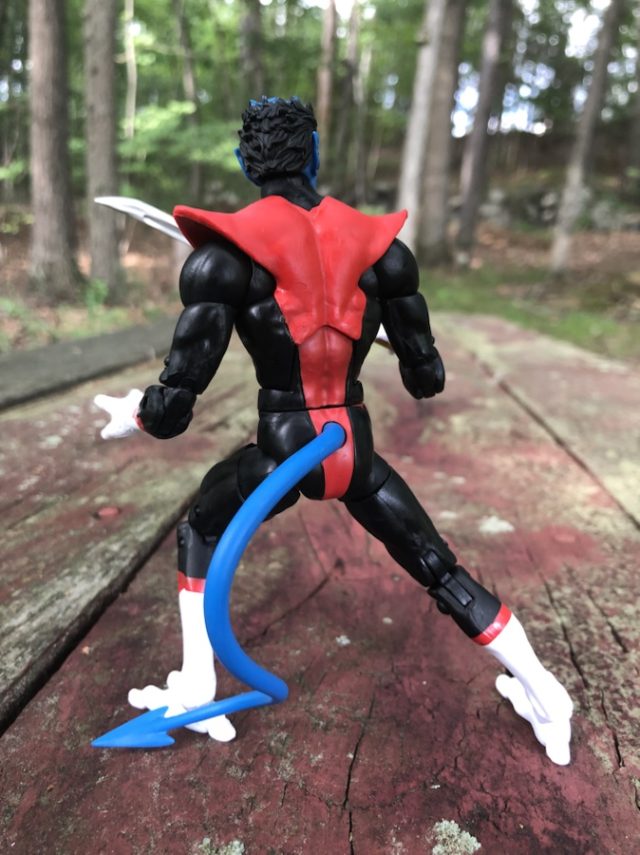 One thing that this figure required that most ML Hasbro releases don’t is a tail. As he should, Nightcrawler has a curved, arrow-tipped tail. The bad news is that it’s not bendy—I’m not sure that current toy laws would allow that in a mass-market action figure with a tail this thin.

The good news is that the tail does at least swivel at the base, allowing you to get it into a variety of places and not mess up the pose you want to stick Nightcrawler in. I would have much preferred a bendy tail—and the tail swivel on mine is a lot looser than I’d like—but if that wasn’t possible, this is a better alternative than a non-movable tail by far. 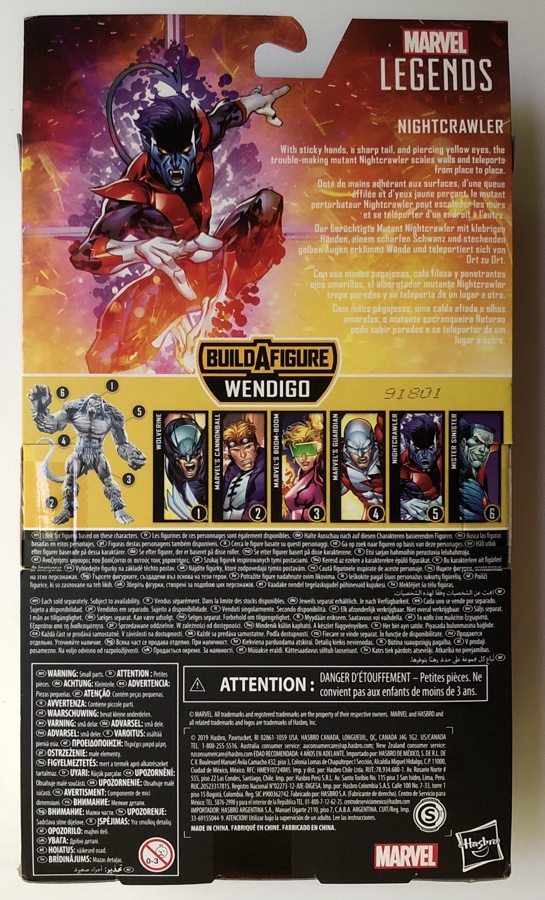 The other thing that has my disappointed about this figure is what’s not included: any kind of teleportation power effects piece. I thought it was a sure thing we’d see the teleportation ring from the recent Blink figure reused here, but nope!

Some folks are requisitioning Blink’s teleport ring to use with Nightcrawler, while others are using magic effects pieces from the Doctor Strange Legends Nico Minoru or even buying Tamashii effects to use. Any of these will work, but will also cost you extra. 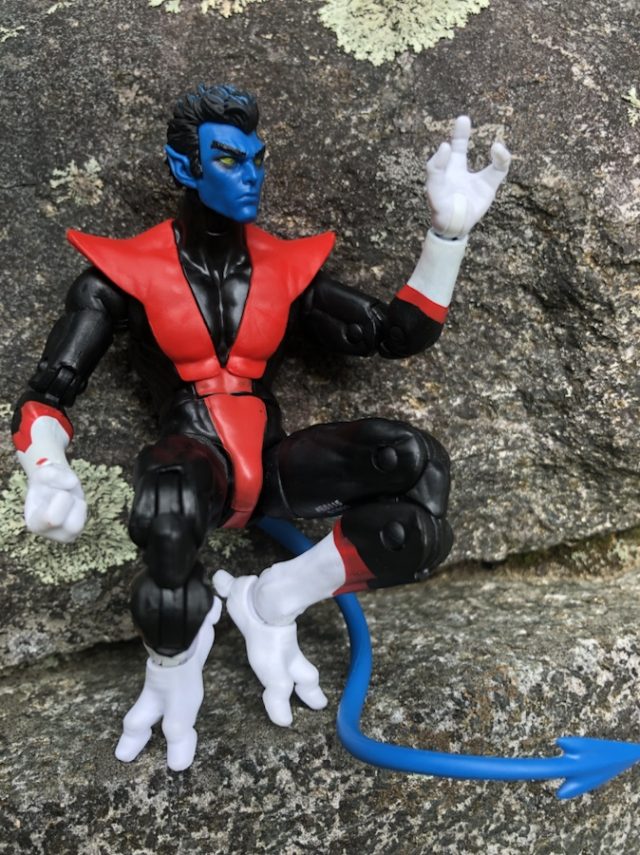 Finally, we’ve got the articulation—which is pretty fantastic. Nightcrawler’s costume inhibits how close he can hold his arms up over his head, but otherwise there’s really nothing getting in the way of putting him into deep crouches, leaping poses, and however else you wanna pose him up.

Butterfly shoulders and swivel calves wouldn’t have worked because of the costume, and I’m overall very satisfied with the flexibility. 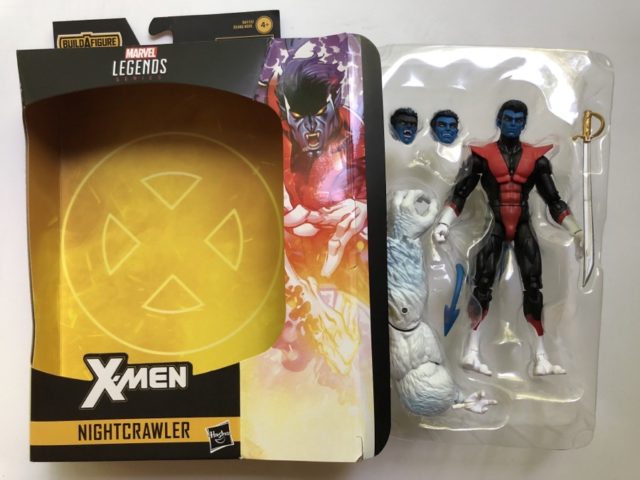 Overall: No doubt about it—Hasbro kicked some fuzzy elf butt with this release. I have some trivial complaints about there being no teleportation accessories included, the tail being sort of loose (and not bendy!) and the sword not being able to be held tightly, but this is a wonderful Nightcrawler Marvel Legends figure overall.

The articulation on this figure is aces, the proportions are spot-on, the three heads are a delight, and it just feels so good to see a 6” Nightcrawler on shelves again. If Hasbro repaints this for an X-Force variant, I won’t even mind ordering it again. Excellent.