Jonathan Hickman’s House of X/Powers of X is basically the equivalent of the X-Men holy bible in my eyes, so there was never a doubt I would drop everything to review this year’s House of X Marvel Legends X-Men Series figures as soon as I got the set in-hand. And after having to wait a few days for the last figure to arrive so I could bust open the whole set, she’s finally here! Marvel Legends House of X Marvel Girl is the fastest-selling figure in this year’s X-Men Legends series—let’s see if she’s worthy of the hype! 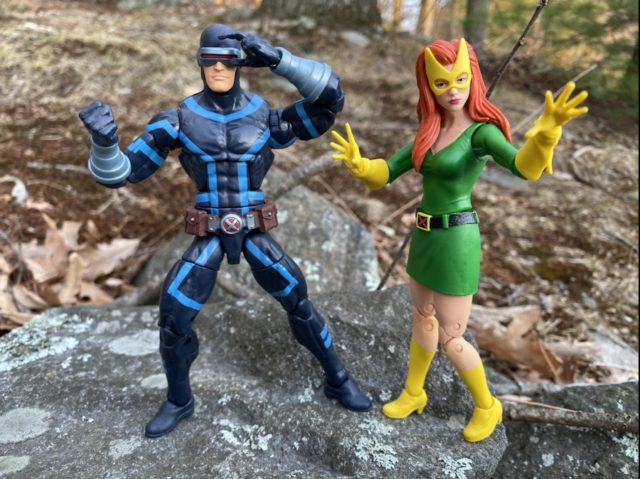 There are at least two or three dozen characters I’d love to see toys of in their modern Hickman-era Dawn of X costumes, but when it comes to a wave 1, Hasbro picked six absolutely must-have characters (and Omega Sentinel) to include. 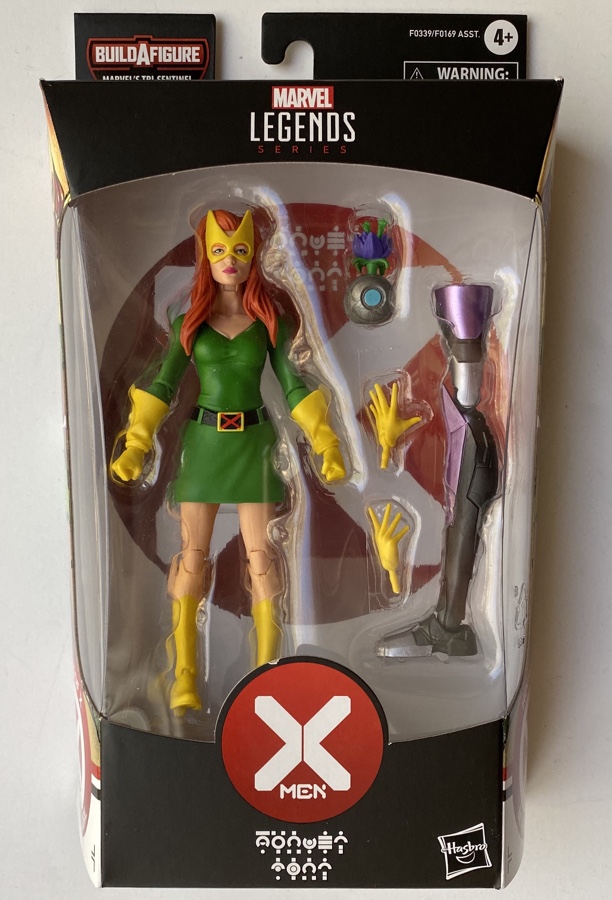 In this new era of the X-Men, Jean Grey has gone retro, reverting back to her very classic green skirt attire with yellow mask, gloves and boots. Hasbro did a toy of this costume quite a few years back, but it’s been out of circulation forever, so I had no qualms seeing it make a return here for a new action figure. 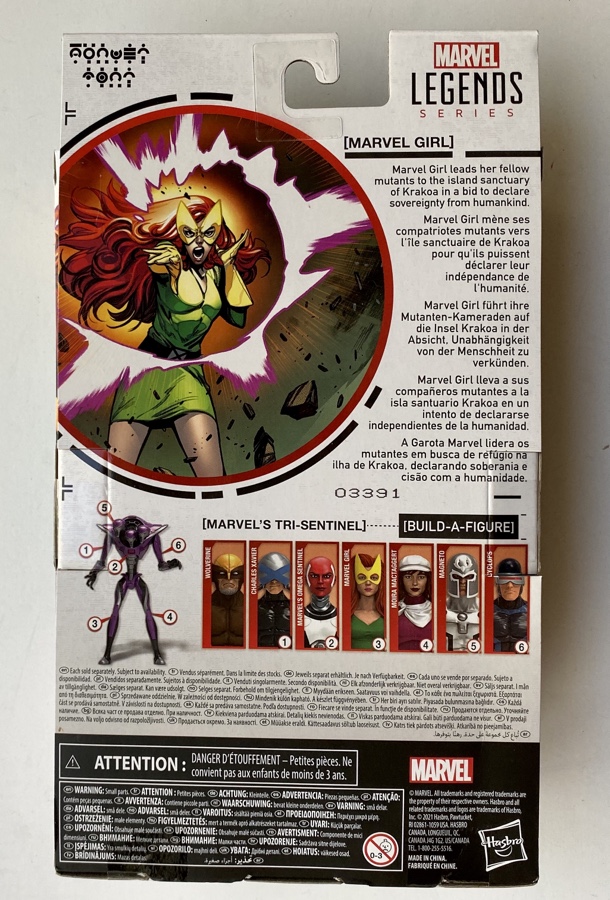 The packaging for this whole 2021 Marvel Legends X-Men series is pure win, with the Krakoan language writing on the packaging being one of the coolest things I can remember Hasbro ever doing. I love the crap out of these House of X Legends boxes. 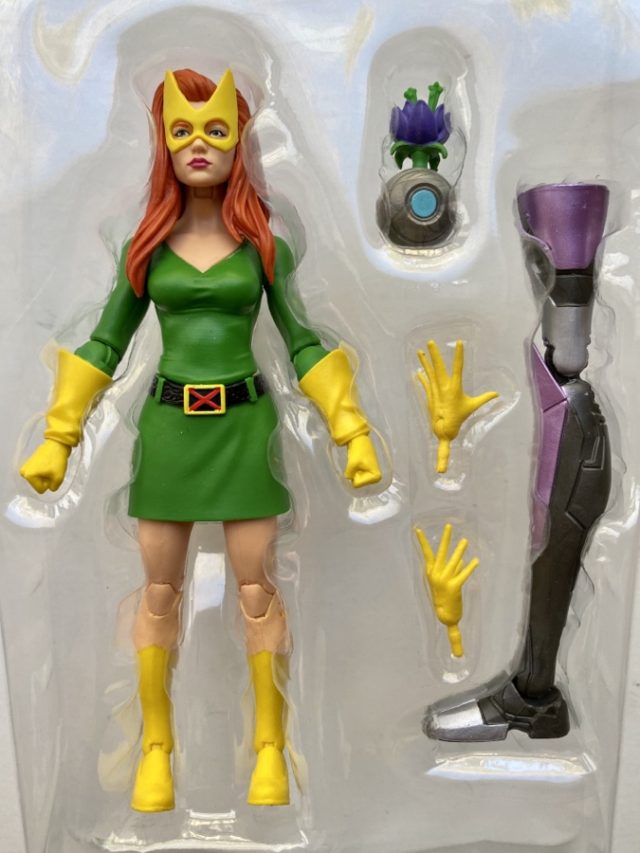 Jean comes with four accessories: a potted Krakoa flower, a pair of interchangeable open hands (to swap with her default fists) and the right leg of the “Tri-Sentinel” Build-A-Figure. I don’t believe Tri-Sentinel is actually the proper name for that character, but it’s what’s on the box, so that’s what I’ll be calling it across these reviews. 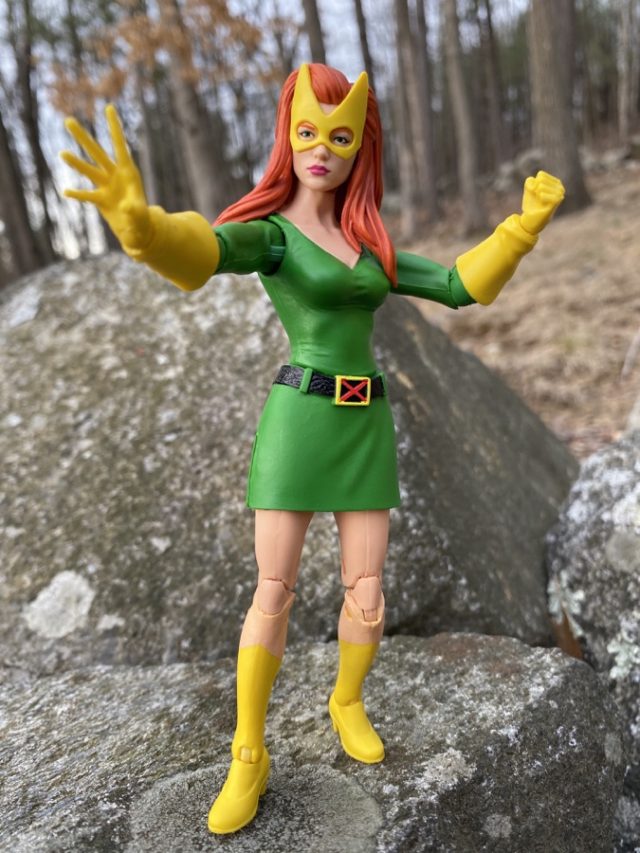 At a glance, the Marvel Legends 2021 Marvel Girl is a great-looking figure. The green and yellow paints chosen are striking and really draw the eye, as well as complementing Jean’s orange-ish red hair beautifully. The paints on this figure have been applied cleanly, and even that difficult-to-paint belt buckle looks nice. A basic, but beautiful action figure. 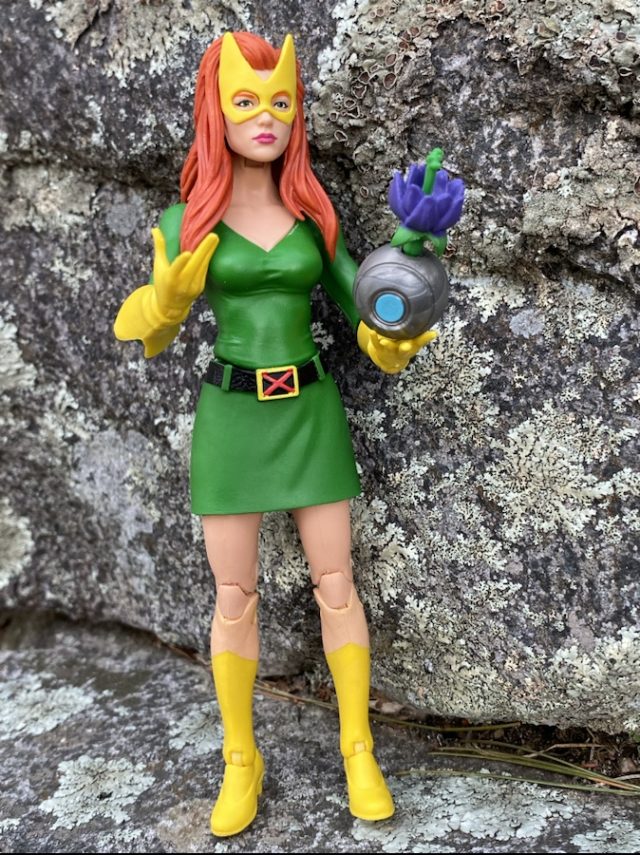 Once you actually go to pose Jean, though, well… I don’t love her as much. The expression on Jean’s face is totally neutral, and doesn’t really feel suitable for combat at all. It’s “fine”, but I think the slightest change to give her more personality could have greatly enhanced this action figure as a whole. 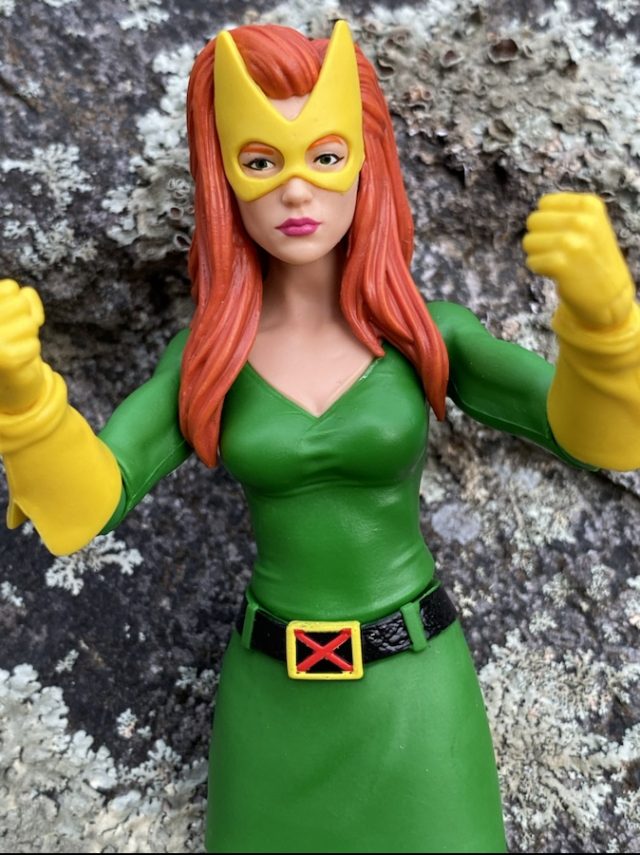 Giving Jean Grey fists as an option is also kind of meaningless, as she’s never going to go sock Magneto in the jaw—I would have much, much rather had a psychic effects piece to clip onto her arm or mask to spice up her potential poses. 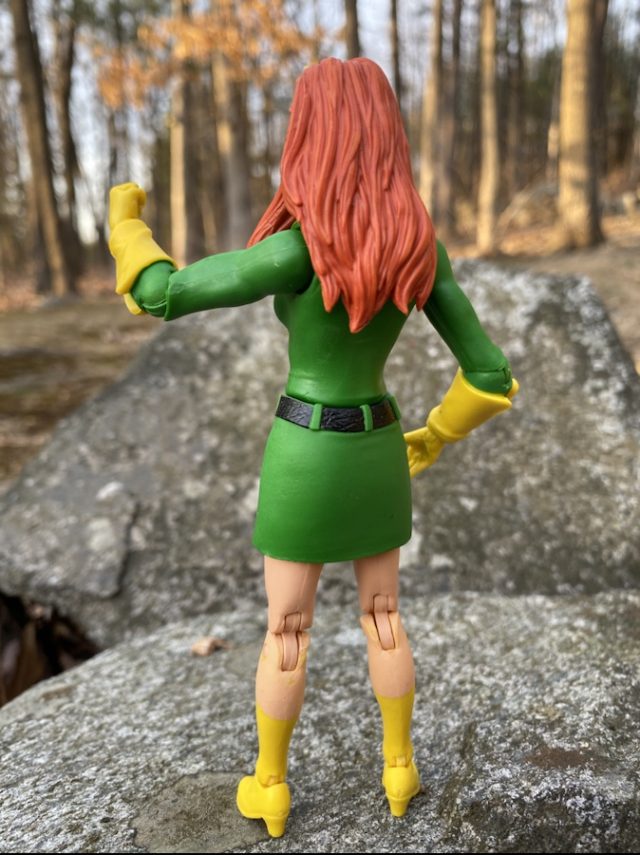 And speaking of posing: the lower body articulation on Jean is outright horrendous. Her hips are virtually immovable because of the plastic skirt around them, and the plastic used for her knee joints feels so unspeakably cheap that I fear I’m going to rip her leg off every time I go to twist or bend her leg. This, combined with her high heel boots, definitely makes standing her up in anything but the most basic poses a genuine challenge. 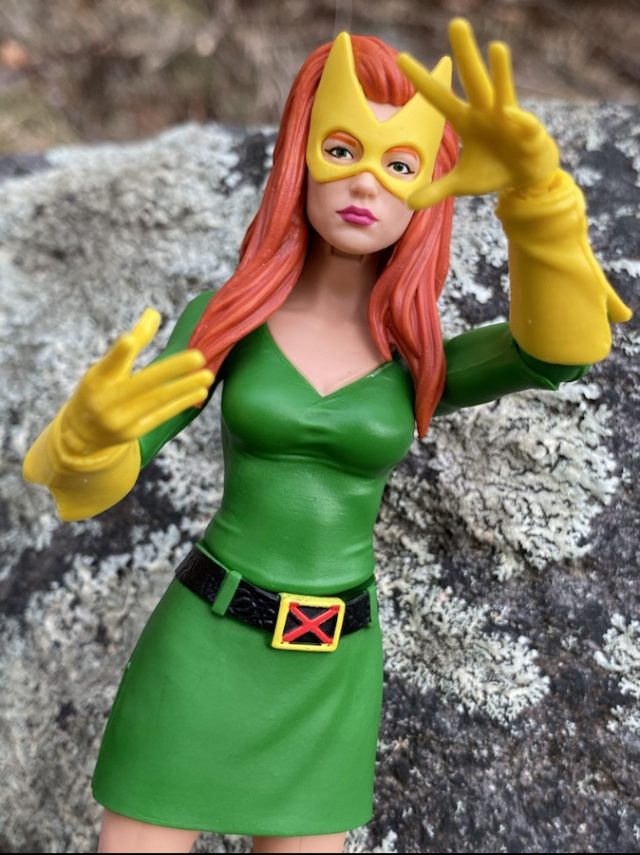 I love the flexible ball-jointed upper torso of the upper body, and even with the limitations of the ball-jointed elbows and lack a bicep swivel, you can still do some okay powerful-looking poses with Jean’s arms. This is still the least fun figure to pose in the whole Marvel Legends Tri-Sentinel Series, but the articulation isn’t a total loss. 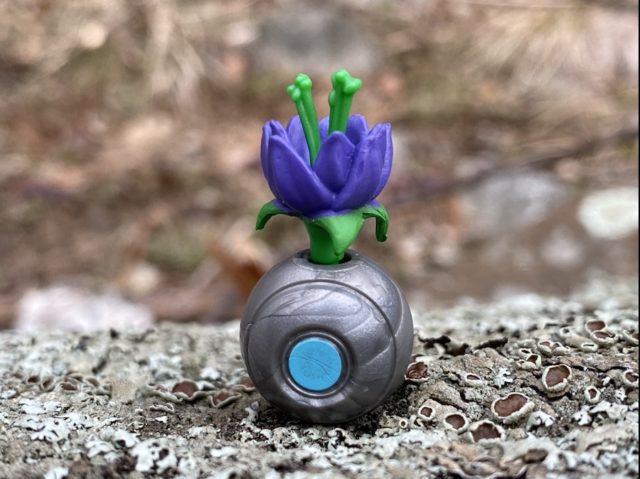 The Krakoa flower with pot is a crucial and frequently-seen element in the Hickman X-Men comics, and it is well-sculpted and looking great here. A wonderful inclusion that really adds to the series. Love it. 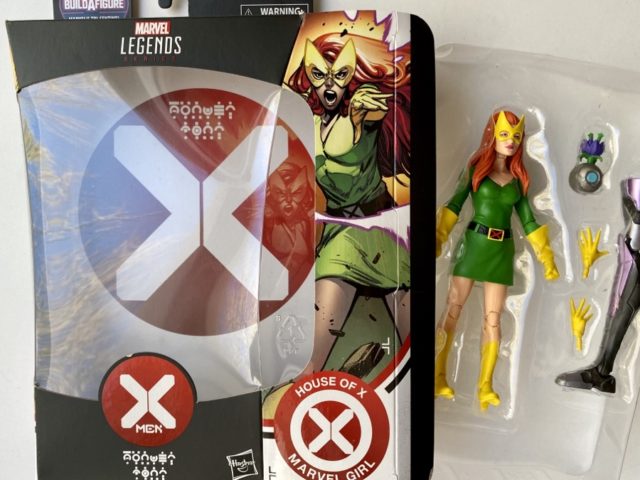 Overall: As a figure to stand around on my X-Men shelf as part of a lineup, I think this House of X Jean Grey is a fine addition with a good aesthetic and some really eye-catching colors. I also deeply appreciate the cool Krakoa flowers pod accessory that she comes with.

As an action figure… I am less enamored with poor Marvel Girl. Her leg articulation is basically unusable, and the rubbery plastic on her legs feels ultra-cheap. Her neutral expression is blah, and giving her fists instead of any effects piece seems needless.

Overall, I’m glad to have a new Marvel Legends Marvel Girl figure—but I wish she had better articulation, a more interesting expression and some effect accessory of some kind. As it is, she’s just not all that fun to pose or play with.