This year’s Captain Marvel Legends is one of the most-weighted series towards movie characters that we’ve seen Hasbro release, with 5 of the 7 characters in the wave hailing from the movie. But while only two single-packed characters are comics-based, both are ones fans have been asking for for a while. And today, I’ll review a figure that collectors seems enthusiastic about, but which seems to be a slow seller online: Marvel Legends Grey Gargoyle! 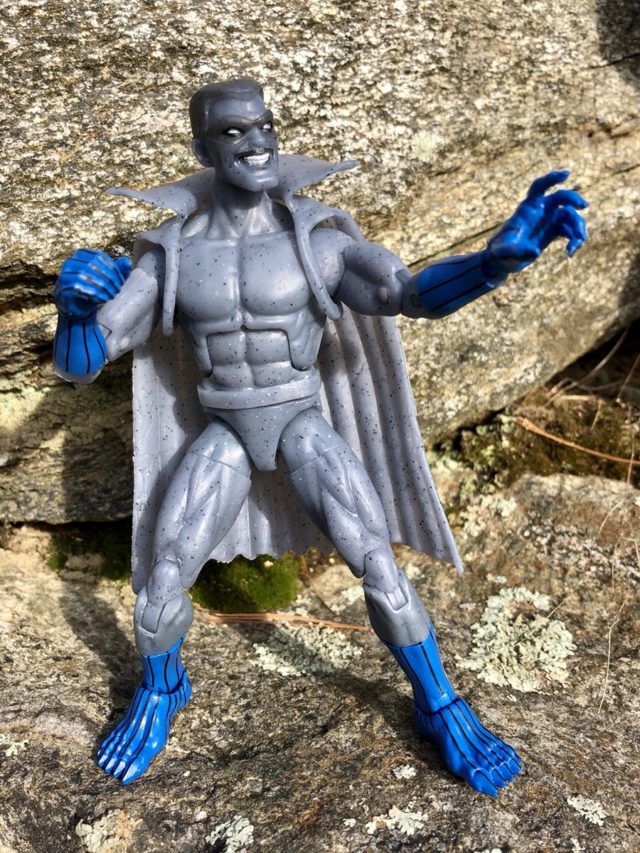 If there’s one character who feels out of place in the new Marvel Legends Captain Marvel Series, it’s Grey Gargoyle. Despite being a classic villain created by Stan Lee with over 50 years of history (no, seriously), Paul Duval has never been in the upper echelon of supervillains in the Marvel Universe.

Truthfully, I only really remember Grey Gargoyle from the 90s Iron Man cartoon series (and the tie-in Toybiz action figure of him), but he did fight Ms. Marvel Carol Danvers in Civil War: The Initiative, so he’s fair game for this action figure series. Was this figure that’s going to make many collectors scratch their heads in confusion worth including? 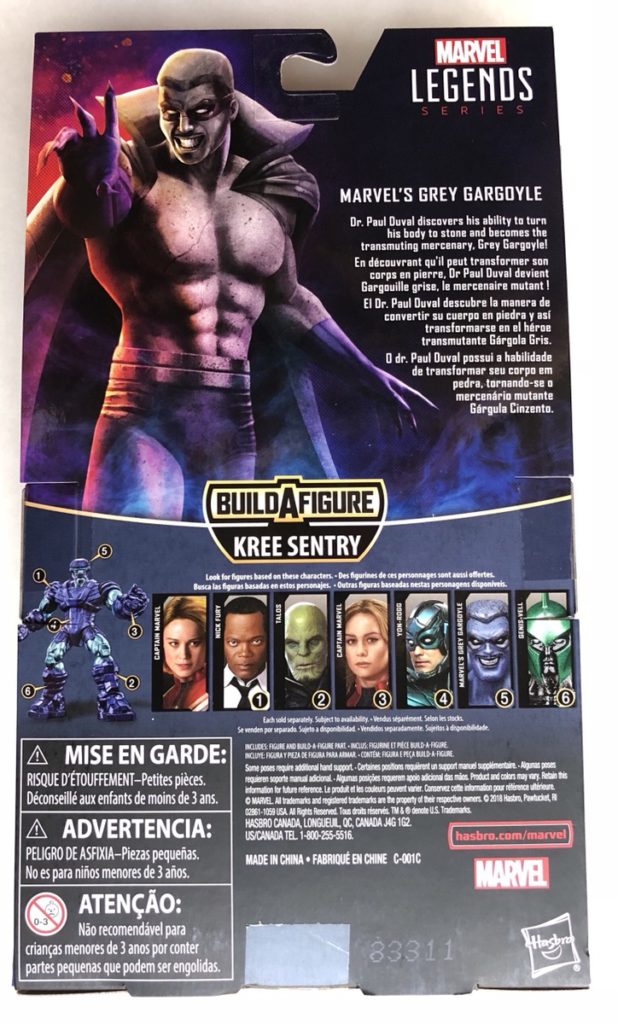 Grey Gargoyle is a tough character to make exciting as an action figure. He’s not the type of villain with flashy powers that can be demonstrated via effects pieces; he doesn’t use any weapons; he’s not a ninja or acrobat… he’s essentially just a dude who can touch stuff and turn it (and himself) to stone.

That doesn’t exactly give Hasbro a ton to work with. But all of the elements that do make Grey Gargoyle aesthetically compelling are present and accounted for here. 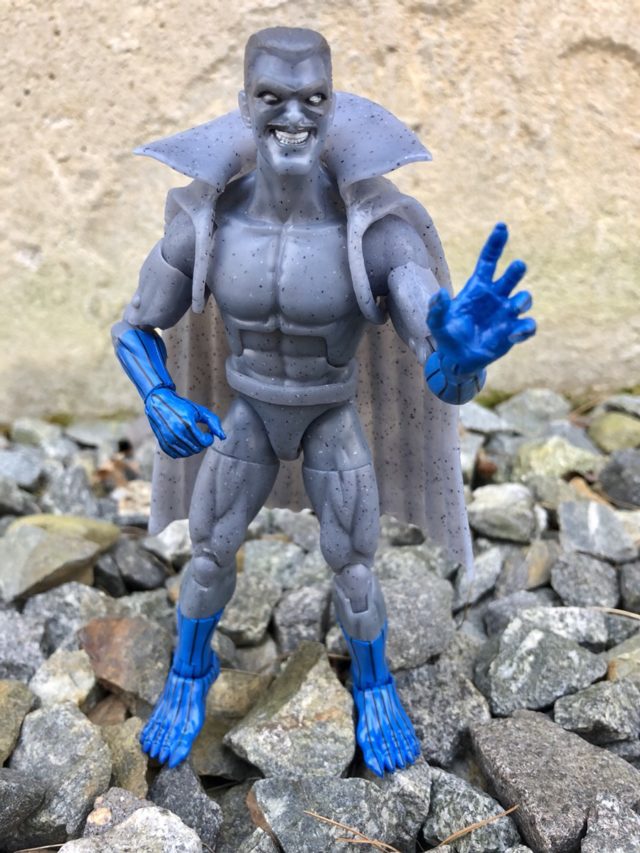 Obviously the most important characteristic of this figure is that it should look like a guy made out of stone. And it does. Somewhat reminiscent of a few of the 90s Disney’s Gargoyles action figures (I loved that line), Hasbro gives us a nice slightly-translucent grey plastic for almost all of the body on this figure, which is detailed with hundreds of little flecks of black and white deco everywhere. It’s so simple, but the effect works marvelously. Absolutely love the look of this. 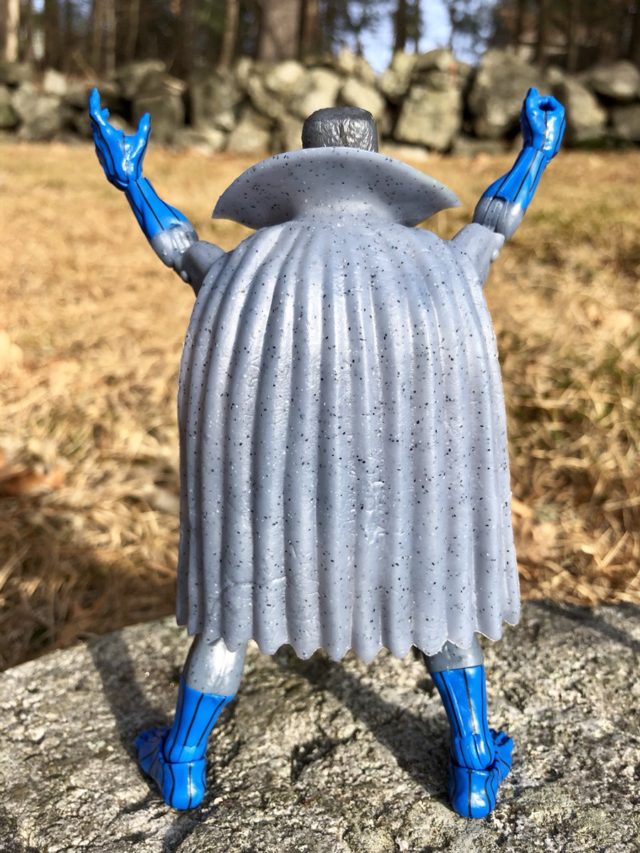 The angular, sculpted ridges all over the cape look awesome, and I love the retro-feeing collar. I’m also a big fan of the straps that go under the arms to keep the cape from falling off even if the pegs comes loose. 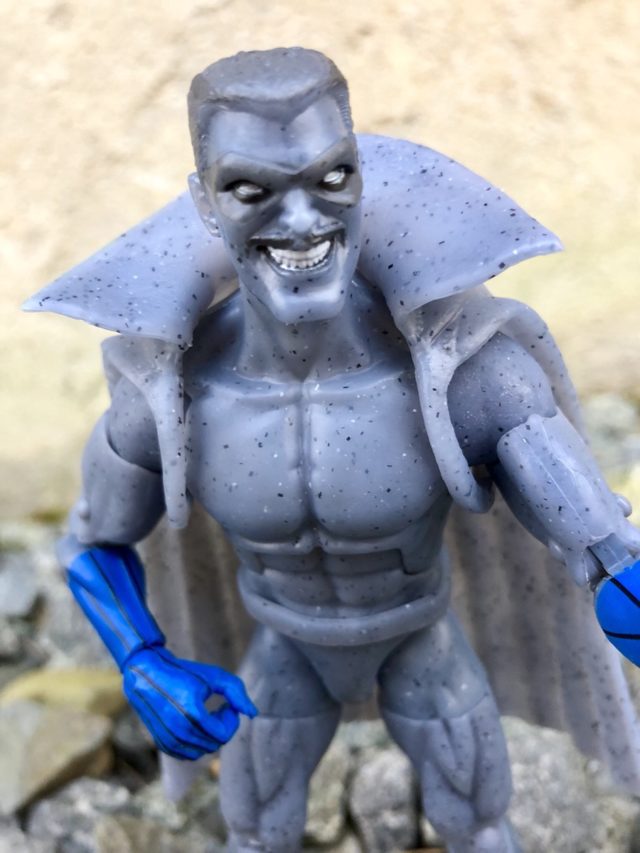 Whereas Toybiz gave this guy a tough, no-nonsense face back in the 90s, Hasbro has opted for a nefarious “Nyeh-heh-heh!” Snidely Whiplash style evil grin. The facial expression here has a lot of personality. I like it. 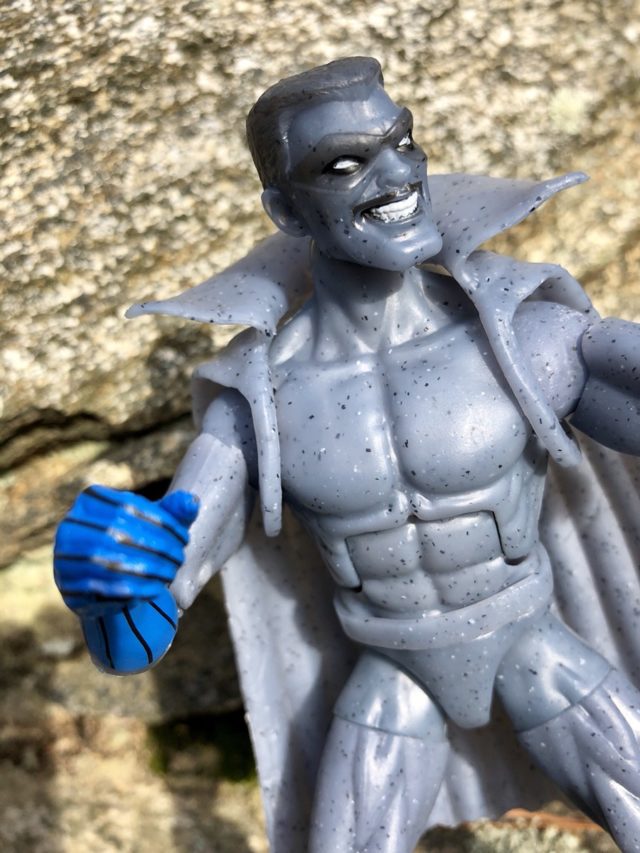 Depending upon the lighting source, it can be either fairly obvious or not obvious at all that the head sculpt here isn’t a 100% color match for the body. It’s a hair darker for the whatever reason, which looks a bit funky under very good lighting conditions. This will probably be fine unless you’ve got direct light shining right on the figure, though.

The gloves and feet on the Grey Gargoyle Legends figure are both painted in bright blue with thin black stripes, just like in the old Jack Kirby drawings of the character! These feel gloriously throwback and make me smile looking at them, as well as being a great contrast to the transparent bits. 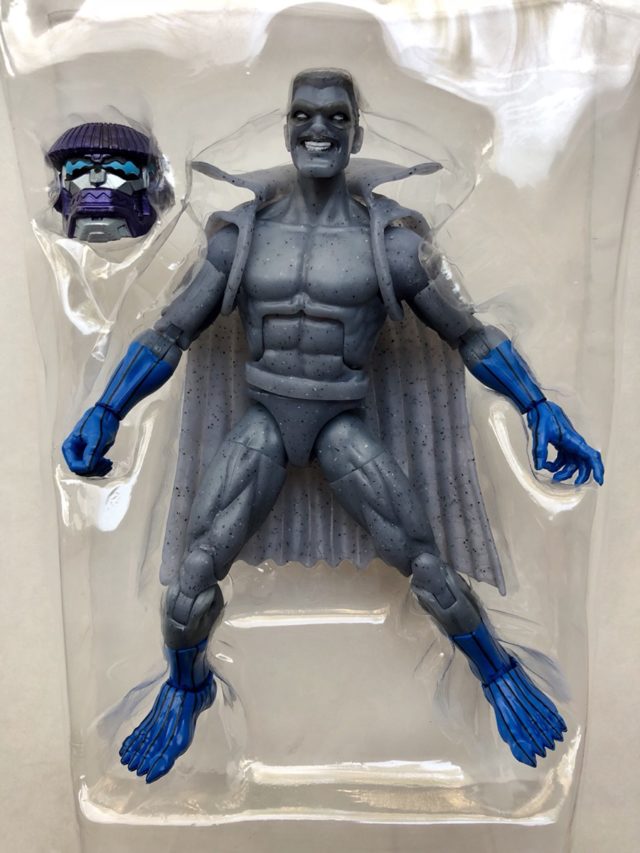 For accessories, we’ll get a Kree Sentry Build-A-Figure Head and nothing else and we’ll like it (or not). Toybiz gave us a brick accessory 25 years ago, but that was silly then and now. I think an accessory of some sort might make this figure more interesting to pose and play with, but I’ve got no good suggestions to make as to what that would be, so I suppose I can’t complain. 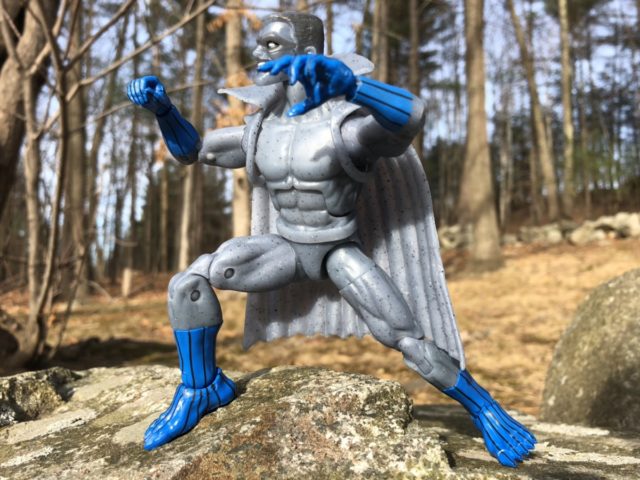 Finally, the articulation on this figure is exactly what you’d expect from a standard Hasbro Marvel Legends figure in this day and age: Ball-hinge Head and shoulders; double-jointed knees and elbows; hinged ankles with rockers; swivel waist/biceps/thighs/boots; swivel-hinge wrists; ab crunch.

The cape can throw off the balance of the figure and make him fall backwards in some poses—as well as getting in the way of some of the arm articulation—but otherwise the articulation scheme is as solid as ever. 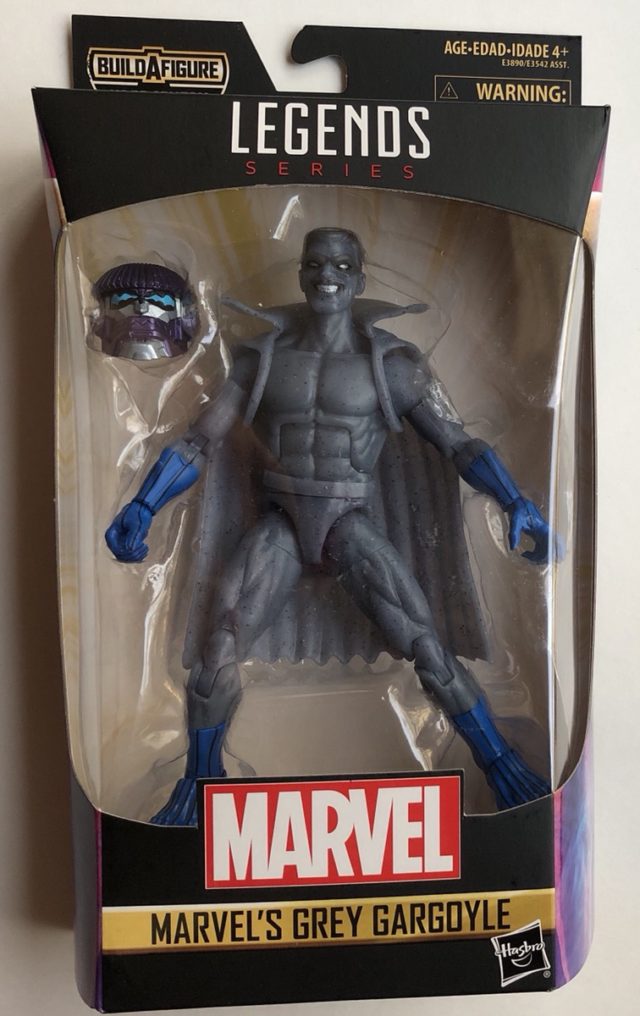 Overall: I really struggled with writing this review, as ML Grey Gargoyle is a visually cool figure that otherwise doesn’t have much of anything going on besides its good looks. The “stone” plastic/deco on this figure looks terrific, the standard super-articulation is implemented and, well… that’s about it.

There’s no accessories to liven things up and the head doesn’t entirely match the body, but for a very basic character, Hasbro has done a “good” job with the Grey Gargoyle Marvel Legends figure. This is not a character that we can realistically expect to ever see revisited, so if you want this C-List villain for your shelf, you’re not going to do any better than this.