But wait—there’s more! Before I move on to reviews of the first 2020 Marvel Legends Spider-Man series, there’s one more Fantastic Four Legends figure to review: the Super Skrull Build-A-Figure! Toybiz released several variants of Super Skrull that were ridiculously difficult and expensive to obtain, but you can build this Hasbro Super Skrull BAF “free” if you buy the whole Fantastic Four series. Is he worth buying this wave to complete…? 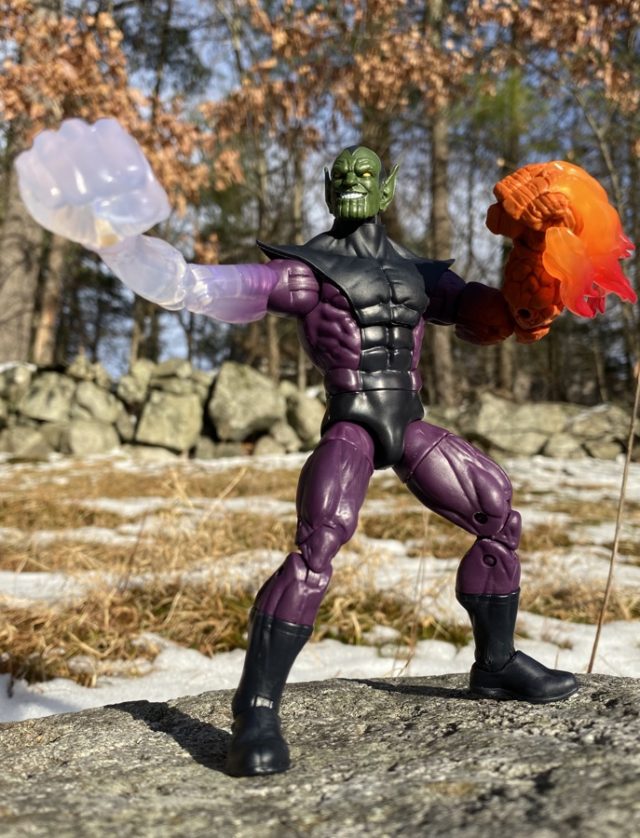 Even though I’ve never found Super Skrull the most compelling character to read stories about, the nature of his character design makes him one of the coolest cosmic villains to look at visually. So when Toybiz made a trio of Super Skrull Legends variants many years back, I was pretty irritated that all of them were hard to find without paying an aftermarket surcharge.

As such, I was delighted when Hasbro announced their Fantastic Four Marvel Legends Super Skrull Build-A-Figure figure that would be “free” (in a way) for anyone buying the whole Fantastic 4 wave. Now that it’s arrived, is it a worthwhile figure to fill this gap in many fans’ collections? 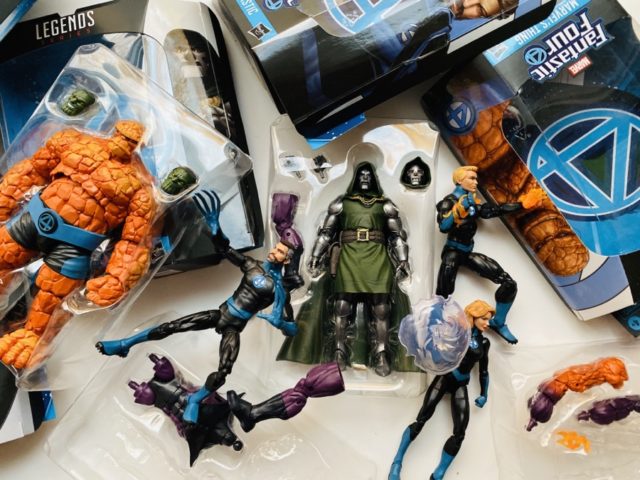 As a Build-A-Figure, Super Skrull doesn’t have any proper packaging of his own—you get the pieces of him by buying the six other figures in the wave (all of which I reviewed earlier this month). I think that’s a solid choice, as it allows more interchangeable parts as accessories than we would have have gotten if this was a single figure release. 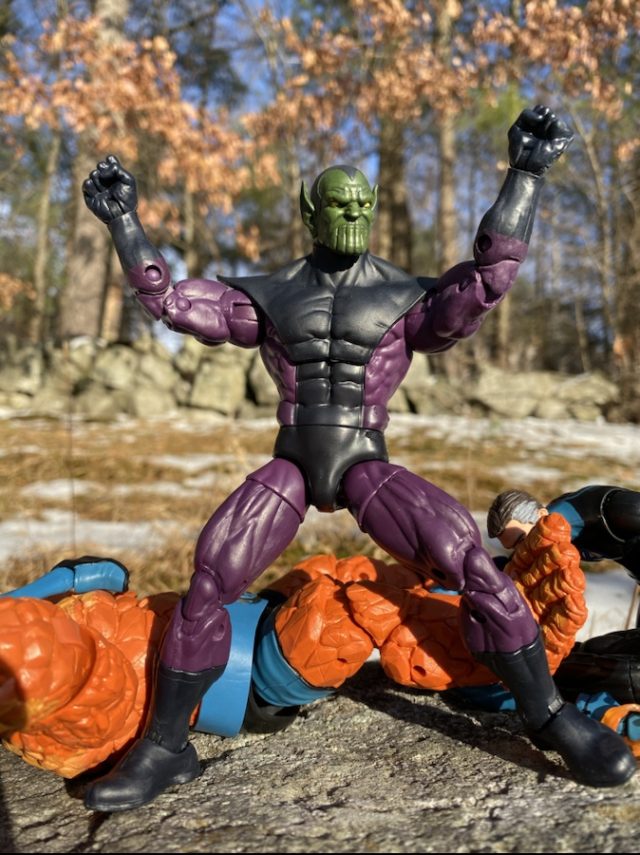 For anyone who just wants a basic Skrull Soldier/Trooper/Dude for their shelf, “normal” Skrull arms are included here as well as a less aggro head. Obviously the BAF nature of this release are going to make army-building out of reach for most folks, but I can’t see Hasbro not releasing an individual Skrull figure (or two-pack) down the road now that all the tooling exists. 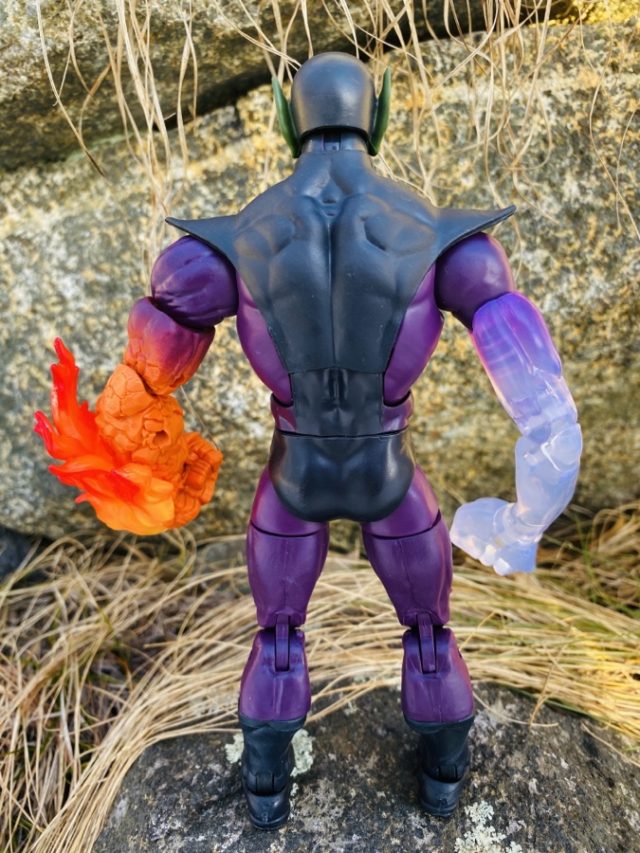 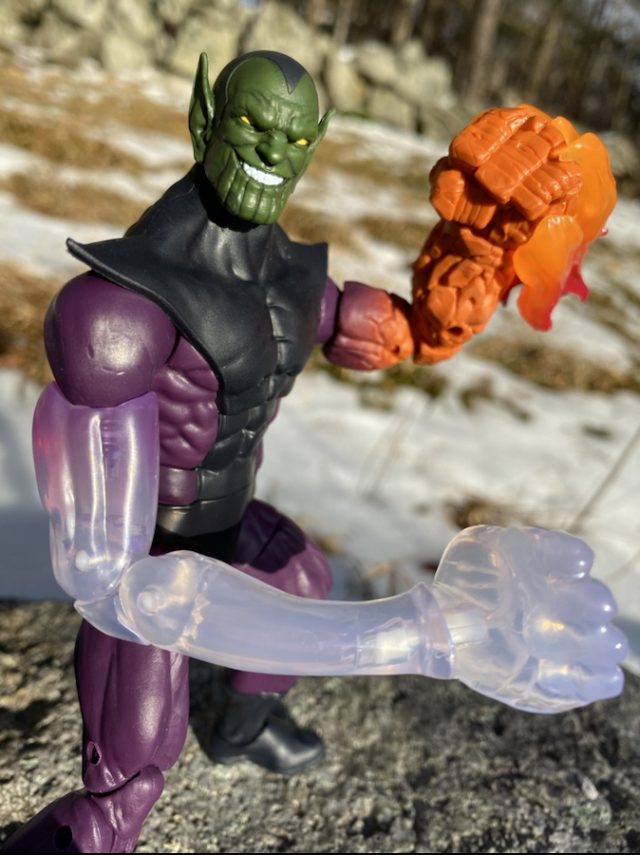 Frankly, I love both of these powered arms so much that I can’t see myself ever swapping in the “normal” arms after taking the review photos. I wish the flaming effect snapped onto the Thing arm a bit more tightly, but otherwise I totally dig these arms and couldn’t be happier with them. 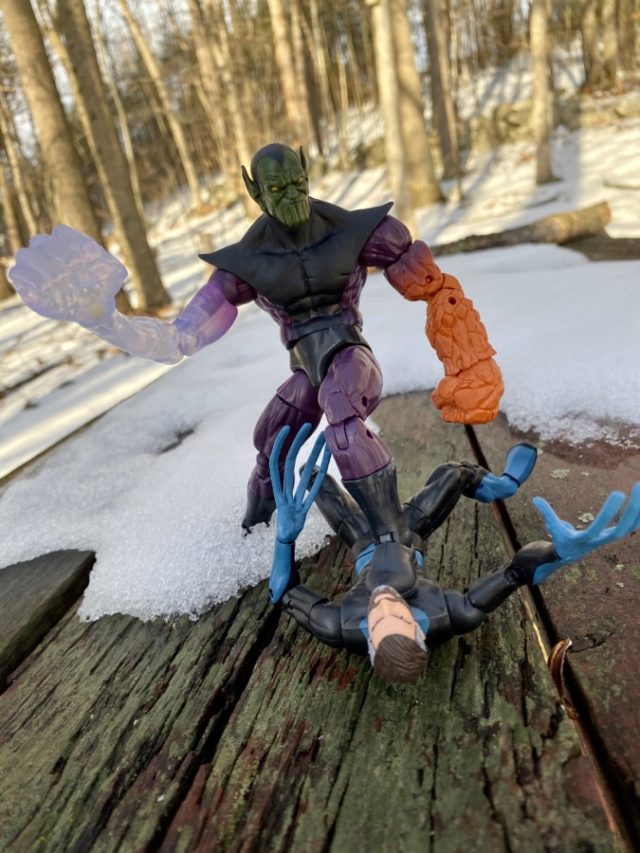 I do think it would be really neat if Hasbro went all-out and gave us fully-flaming and fully-invisible versions of this mold down the road (a la Toybiz), but it’s understandable that they didn’t want to complicate this Build-A-Figure release by including variant bodies. Good move, though I hope to see this revisited later. 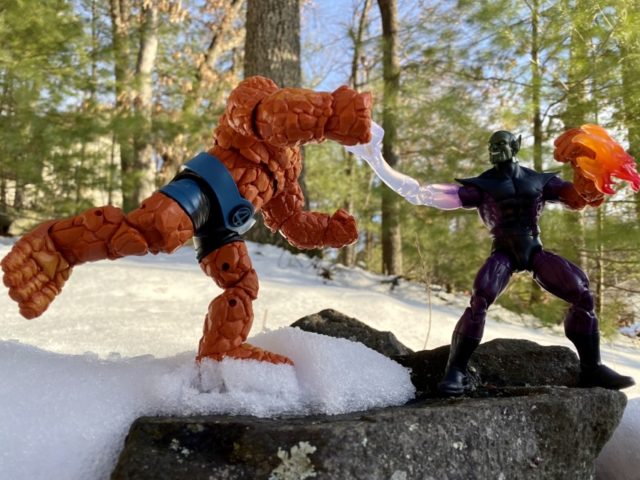 While my Johnny Storm figure surprised me by having a lot of paint snafus, Super Skrull falls in line with the rest of the wave by being an excellently-painted action figure. The deco is all neat and clean, and nothing about the paint is setting off my OCD. 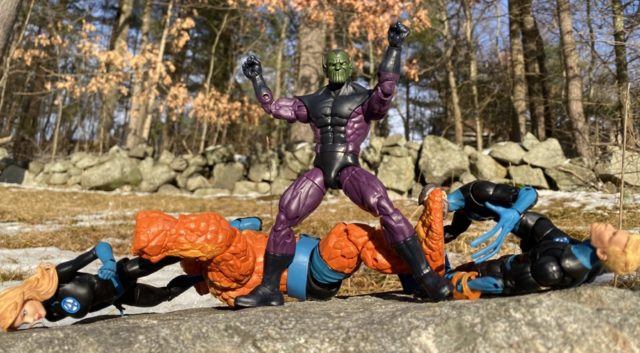 The articulation level is pretty much what you’d expect from a modern Marvel Legends male:

It was a welcome surprise to see the double hinges on the elbows of the powered arms, and there’s really not any costume bits to get in the way of the articulation’s range of motion. 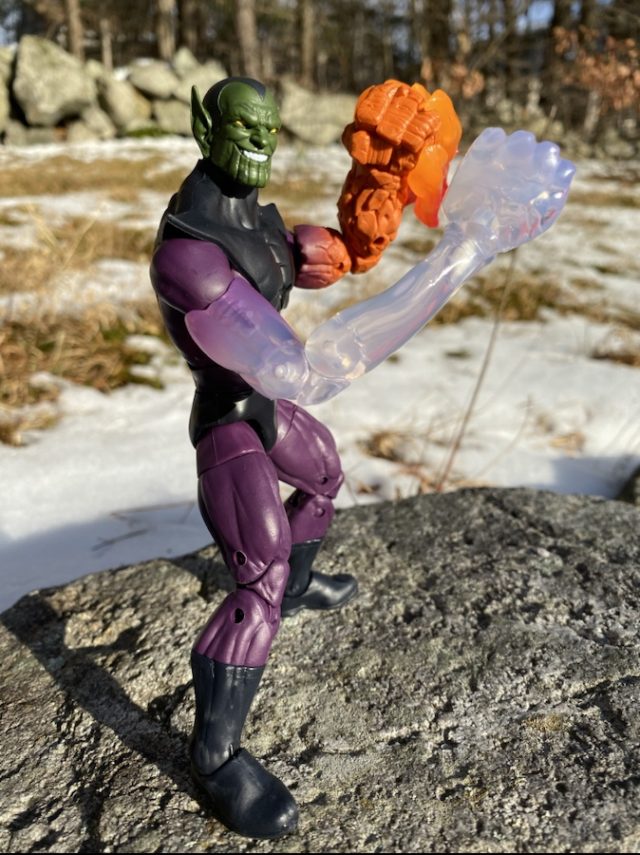 The one issue I do have with the figure is that the plastic used for most of the joints is the rubbery, cheap-feeling kind that wobbles and constantly makes me fear ripping or breakage during light posing. I worry this figure won’t be able to hold a pose well in the future if the rubbery joints weaken (or worse, break), which is a real shame since this is an outstanding toy otherwise. 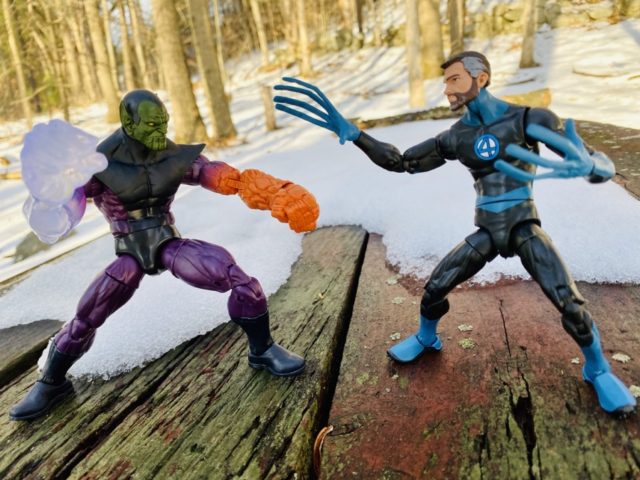 Overall: It’s awesome to finally get a 6” Super Skrull figure that’s not impossible to track down like the Toybiz version(s), and the Hasbro iteration is a pretty satisfying attempt that comes close to perfection. The plastic quality on the joints is cheaper/more wobbly than I’d prefer, and it’d be nice if Hasbro made even more interchangeable parts available to show off the Fantastic Four’s various powers.

That said, the options to display the flaming Thing arm or invisible stretched arm are both fun, and I dig the capability to change this into a “normal” army-builder Skrull. Hopefully we see this Marvel Legends Super Skrull figure reissued both for army-builder purposes and for fully-flamed/invisible variations, because it’s a great figure that leaves me hungry for more.