FOR THE FIRST TIME IN 87 YEARS, THE MOST IMPORTANT PIECE OF COMIC ART FROM THE GOLDEN AGE SURFACES  AND WILL GO TO AUCTION!!

THE INFLUENCE OF FLASH GORDON ON SCIENCE FICTION IS MONUMENTAL, AS ITS INSPIRATION LED TO THE EVENTUAL CREATION OF STAR WARS 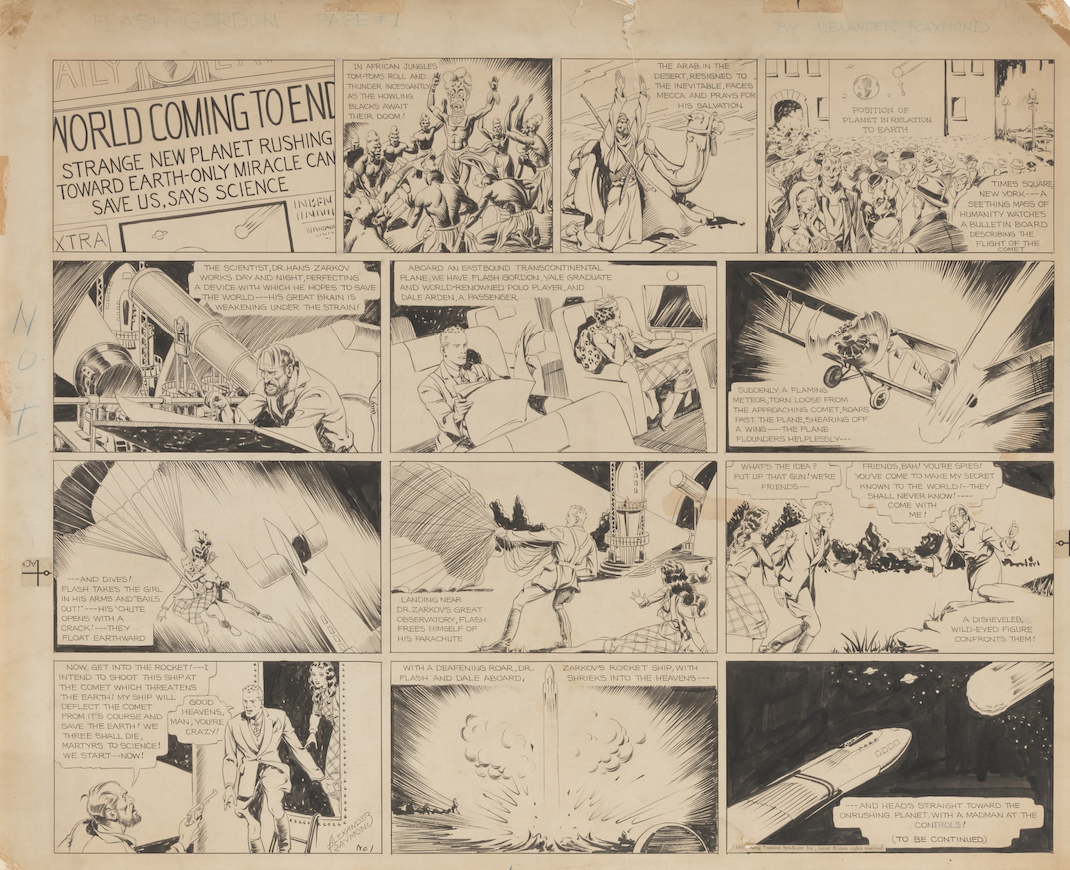 Accomplished in pencil and ink on 28.25 x 23 in. illustration board.  Signed “Alexander Raymond” beside “No 1” in the lower left panel.  On the top margin in blue pencil, “Flash Gordon Page #1 By Alexander Raymond” with “No. 1” written on side and bottom margins.

In late 1933, King Features Syndicate assigned Alexander Raymond to create a Sunday page to compete against the popular Buck Rogers strip that made its newspaper debut in 1929.  The result was the visually captivating science fiction epic adventure Flash Gordon that quickly developed an audience far surpassing that of Buck Rogers, due to Raymond’s vastly superior artwork and ghostwriter Don Moor

e’s engaging storylines.  Raymond and Moore also created the complimentary strip, Jungle Jim, an adventure saga set in Southeast Asia, as a topper that ran above Flash in newspapers.

Raymond’s first Flash strip debuted on January 7, 1934, introducing the handsome “Flash Gordon, Yale graduate and world-renowned polo player” and his lovely companion, Dale Arden, who parachute out of a crashing plane and are Shanghaied by Dr. Hans Zarkov aboard his rocket ship launched to intercept the threatening planet Mongo hurtling towards Earth.  Thus began the fantastical space opera that, by the late 1930s, was published in 130 newspapers across the globe, translated into eight languages, and read by over 50 million people. 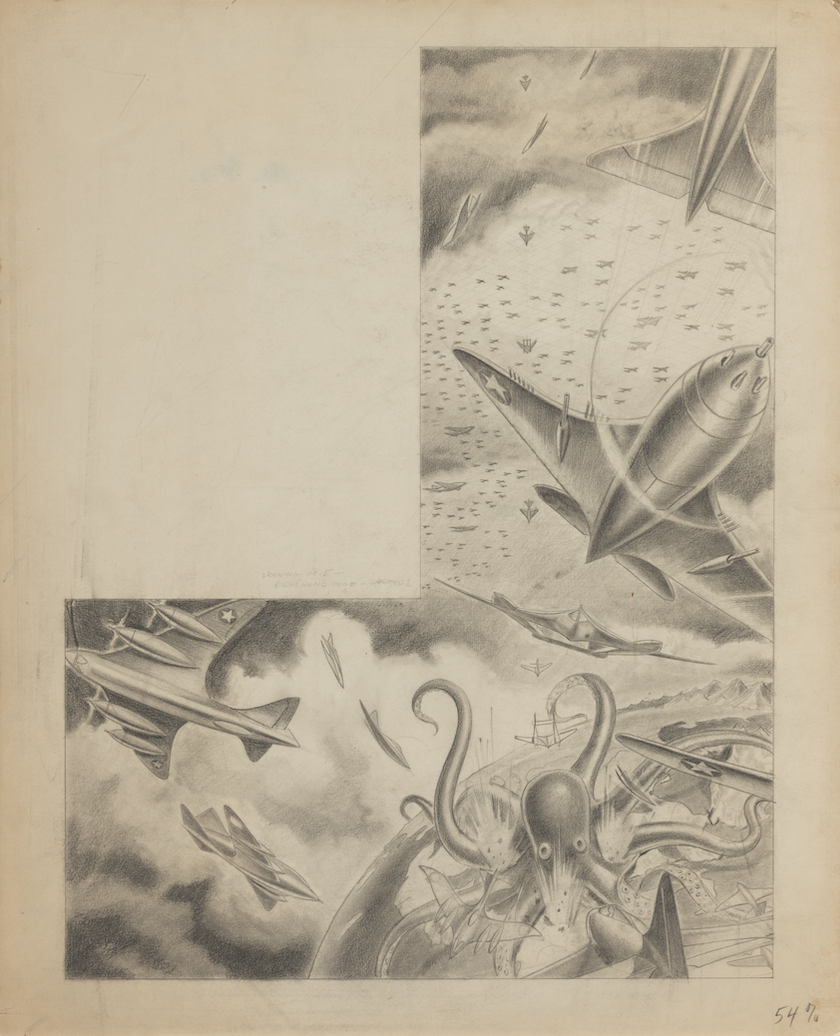 From 1936-1940, Universal Pictures released three highly popular Flash Gordon movie serials starring the 1932 Olympic gold medal swimmer Buster Crabbe.  Alex Raymond was encouraged to draw by his father at an early age, and by 1930 he became an assistant illustrator working with cartoonist Russ Westover on his Tillie the Toiler comic strip.  Through this association, Raymond was introduced to William Randolph Hearst’s King Features Syndicate where he later became a staff artist and produced his best work.

Alex Raymond’s realistic style and skillful use of feathering (a mid-tone shading technique using a series of parallel lines to give form and volume to objects and figures) influenced comic luminaries such as Jack Kirby, Russ Manning, Bob Kane and Al Williamson, just to name a few.  Flash Gordon is regarded as one of the best illustrated and most influential of American adventure comic strips.  Siegel and Shuster based Superman’s uniform of tights and a cape on costumes worn by Flash.

The historical impact Flash Gordon had on science fiction and pop culture heroes of the 20th century cannot be overstated.  The “space western”, emphasizing space exploration as the final frontier, influenced Gene Roddenberry to create Star Trek.  George Lucas had originally wanted to adapt the Flash Gordon serials in the 1970s, yet was unable to secure the rights, and his project evolved into Star Wars.  Lucas’ homage to Flash is evident with the opening title “crawl,” episodic story structure, “moving wipes” when transitioning to new scenes, good (Flash/Luke) versus evil (Ming’s Empire/Galactic Empire), incorporating a “Cloud City” into the storyline, and the narrative tied together with a grand, sweeping orchestral musical score. 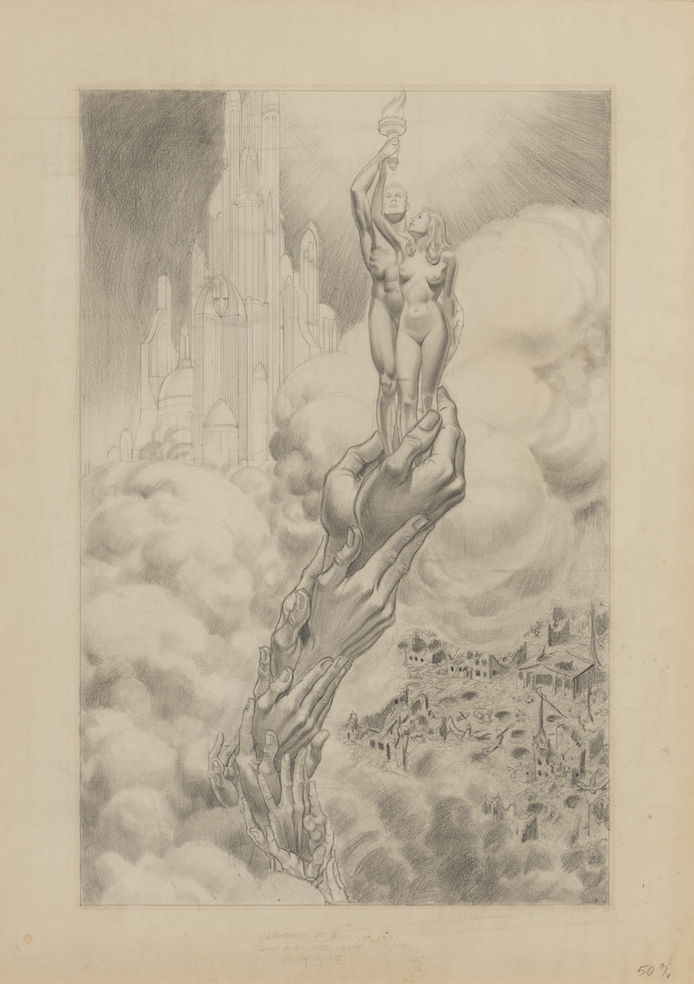 three other Alex Raymond artworks, including Jungle Jim #1 – the monumental origin and first appearance of Raymond’s answer to Tarzan (above on the right) and companion “topper” to his iconic Flash Gordon comic strip – both launched simultaneously on January 7, 1934. The other two artworks are Alex Raymond’s futuristic concepts – one depicting warplanes defeating the Axis Powers (above on the left); the other showing his vision of peace following World War II, featuring nude figures of Flash Gordon and Dale Arden holding the torch of freedom (at right), both published in the October 20, 1942 issue of LOOK Magazine.

ABOUT PROFILES IN HISTORY
Founded in 1985 by Joseph Maddalena, Profiles in History is the world’s largest auctioneer & dealer of original Hollywood Memorabilia, historical autographs, letters, documents, vintage signed photographs and manuscripts. Born into a family of antiques dealers in Rhode Island, Joseph “Joe” Maddalena learned early on how to turn his passion of collecting historical autographs into a career. Upon graduation from Pepperdine, Joe pursued his passion to become a full-time dealer of historical documents, and opened his first office in 1985. Profiles in History has held some of the most prestigious and successful auctions of Hollywood memorabilia and own virtually every Guinness Book record for prices of original screen-used memorabilia.  Highlights from their previous auctions include the “Cowardly Lion” costume from The Wizard of Oz for $805,000; Steve McQueen’s “Michael Delaney” racing suit from Le Mans for $960,000; From the history-making Debbie Reynolds Auction in June 2011, Profiles in History sold the Marilyn Monroe “Subway” Dress from The Seven Year Itch for $5.52M and the Audrey Hepburn Ascot Dress from My Fair Lady for $4.44M. In February 2012, Profiles in History arranged the sale of a pair of Judy Garland screen-used Ruby Slippers from The Wizard of Oz to the Academy of Motion Picture Arts & Sciences. In June 2017, at his Hollywood Auction 89, Joe sold the Gary Cannavo collection of Battlestar Galactica spaceships for 1.8 million dollars, the Saturday Night Fever dance floor for 1.2 million and an R2D2 for 2.76 million.  In May 2018, Joe sold the Big Book of Alcoholics Anonymous for 2.4 million. In addition, Joe Maddalena was the star of Hollywood Treasure, which aired on Syfy.  Hollywood Treasure took viewers into the fascinating world of showbiz and pop culture memorabilia.