New Laser X Morph is a Game Target and Blaster in One!

NEW YORK, May 21, 2019 /PRNewswire/ –– NSI International announces the release of the Laser X Morph Blaster – the latest addition to Laser X, the brand of home laser tag played by more than 10 million people around the world! 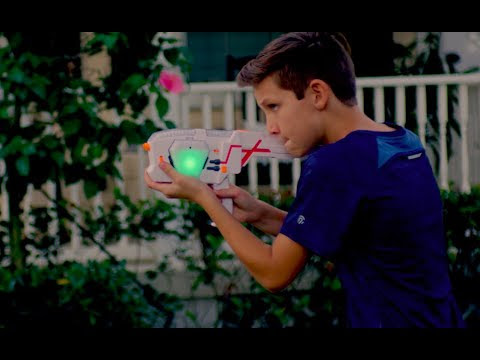 What makes Morph so unique is that it offers multiple ways to play. Each set comes with two interactive game targets with three built-in games that test blasting speed and accuracy – without the need for another player.  In just seconds, these targets “morph” into Laser X blasters with a 300′ blasting range, amazing lighting and sound effects, and other advanced features that Laser X players have come to expect – like an interactive voice coach that offers tips and tricks throughout the game.

Morph Blasters are also the first Laser X blasters that offer the option to wear your receiver target on your arm or leave it mounted inside the blaster for blaster-to-blaster play.

Introducing Laser X Morph – a game target that morphs into a blaster!

“Morph is a tremendous addition to the Laser X lineup,” says Brian Waldman, Senior Vice President of NYC-based NSI and the creator of Laser X. “The blasters can be used so many different ways. With three different ways to play, the Morph Blasters really expand the Laser X play experience.”

“All of our blasters let you play one-on-one or in teams – or set your blaster to rogue, and everyone’s on their own,” Waldman says. “You can have an unlimited number of players. And all of our gear works together, so whatever blaster you have, just turn it on and join the fun.”

All Laser X blasters work both in the dark and in sunlight. Everything players need (except batteries) is right in the box.

“We’ve intentionally created a home laser tag system where you don’t need a phone, app or Wi-Fi,” says NSI President Frank Landi. “This is about getting kids and families active and engaged with each other, not another electronic device! And now there are so many options to get started!”

Laser X Morph retails for $49.99 at Target and www.GetLaserX.com. All other Laser X gear can be purchased at Target, Walmart, Barnes & Noble, Amazon, Best Buy, Meijer and other retailers around the world.

ABOUT NSI INTERNATIONAL INC.:
NSI International Inc. is a global marketer and manufacturer of innovative toys and children’s products under such established brands as Wubble

, Smithsonian® and Laser XTM. NSI is headquartered in New York City, and its products can be found in thousands of retail locations in more than 30 countries around the globe. © 2019 NSI International, Inc. All Rights Reserved.