Hasbro has hit us with a plethora of big surprises lately with their MCU movie-inspired Marvel Legends Infinity Saga series of 6” figures, but none of the ones they’ve unveiled to date have been as literally big as today’s! Thor Ragnarok fans take notice—an all-new 13” Marvel Legends Surtur figure is now up for pre-order! He’s about double the size and double the cost of a normal Marvel Legends action figure: do you need one? 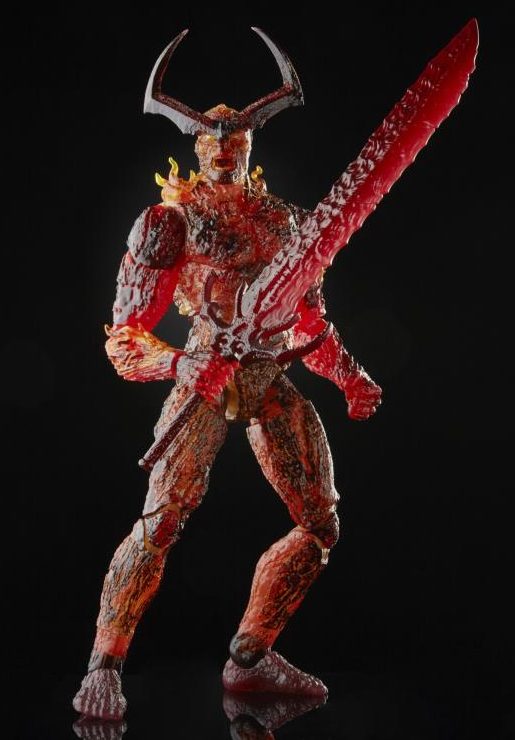 Okay, admission time: while I generally like to preserve Hasbro’s surprises as much as possible and thus don’t talk about leaked listings very often, the leaked rumors for this 2021 Marvel Legends Infinity Saga figures series have been absolutely bang-on to-date (and if they are to be believed, we still have a new Iron Monger and one more multipack left to be announced).

But even with the knowledge that we might be getting a Surtur Marvel Legends figure, I was still totally taken aback today to see that he was actually an oversized 13” action figure! I wasn’t sure if a character with such little screen time would really get that kind of treatment from Hasbro, but I should have had more faith. Apologies, Hasbro Design Team! 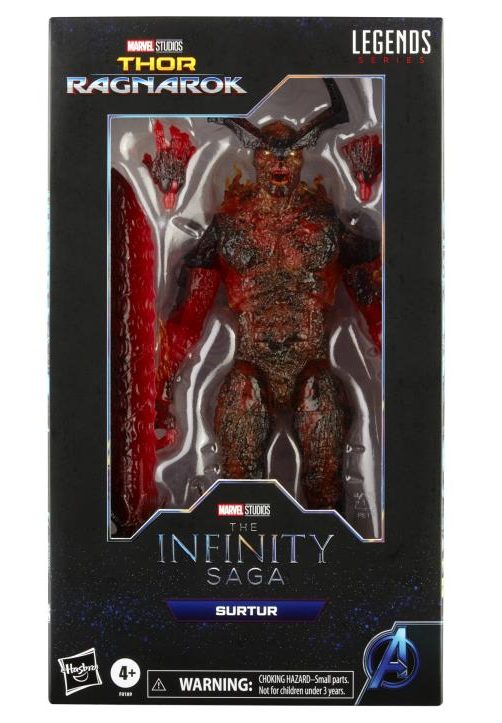 Aside from the fact that this ML Surtur figure is reasonably humongous (technically he could probably be bigger, but then he would likely go past the price and space limits most collectors would be willing to spend on a character like this), the action figure itself is actually pretty fantastic. 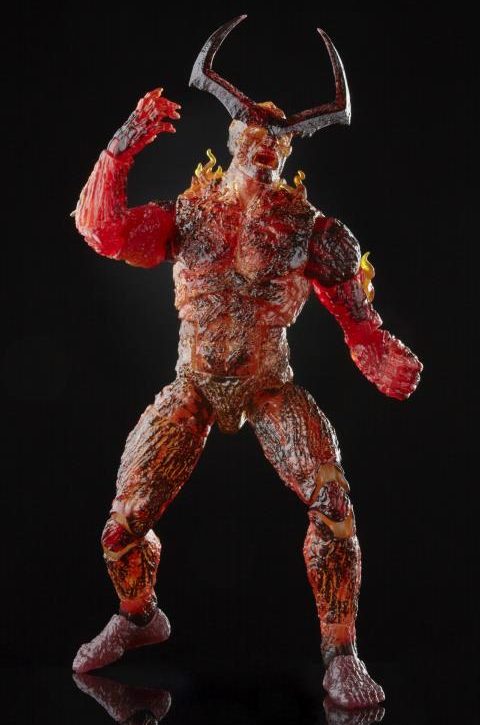 Because of very nature of being a demon empowered by the Eternal Flame that looks like a fiery lava monster, Surtur was always going to be tough to capture in toy form. I wasn’t altogether certain what the results were going to be, but it ends up that Hasbro has done an excellent job of making a tough-to-translate movie character into a recognizable action figure. The level of paint deco on this looks insane, and really helps to justify the price to me. 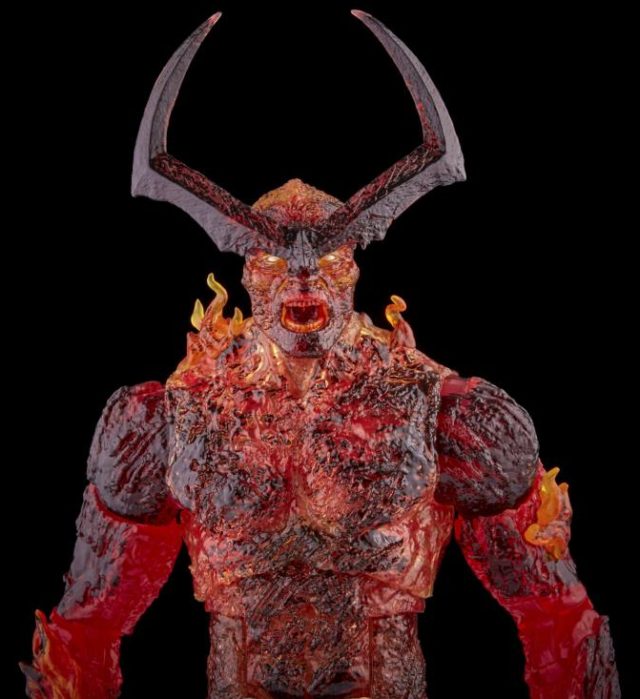 The detailed sculpting texture on the body of Surtur looks phenomenal, and that enraged head sculpt with huge horns looks killer. We get villains with stoic, expression-less faces far too often—I’m glad that the demon Surtur is looking as aggressive and violent as a powerful demonic villain should. Those teeth and all the little scratches on the horns are insanely cool-looking. 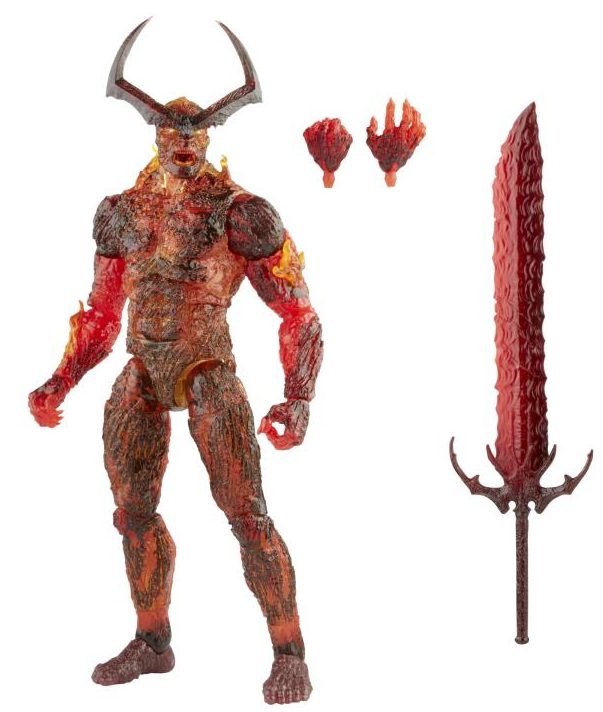 For accessories, we get two pairs of interchangeable hands and a massive honking flame sword. That is one hell (Hel?) of an intimidating blade, and adds a tremendous amount of posing and display potential to this 6” scale (but not 6”) action figure. Awesome accessories and awesome all-around looking figure for a minor Marvel Cinematic Universe villain–two thumbs up, Hasbro! 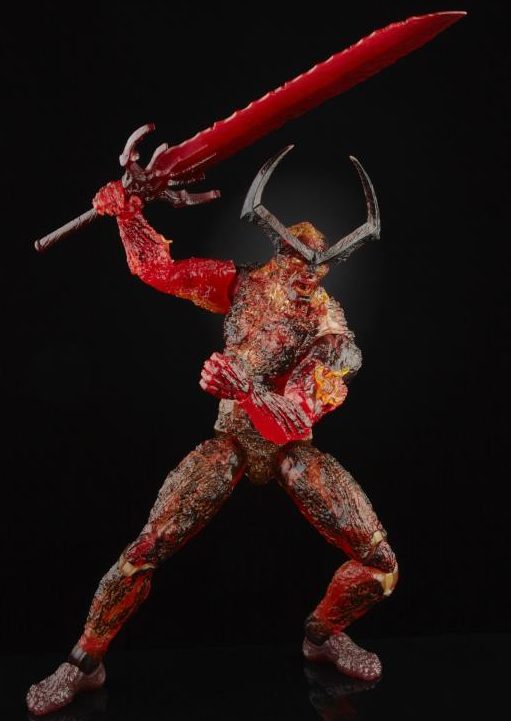 The pricing for this guy is a stiff $52.99, which seems to be consistent across all of the major toy retailers. Generally EE gets my pre-order dollars since they tend to get their figures fastest, but since I didn’t have anything else to buy today to hit the free shipping threshold, I opted for $52.99 shipped via Amazon instead today. Your collecting needs may vary.

What are your thoughts on this long-overdue Surtur figure (the first super-articulated one ever), Marvel collectors? Is he worth his relatively lofty price-point, or is this a minor MCU villain you’re not willing to invest in for such a price? And with an Iron Monger Legends figure rumored to be waiting in the wings, are you hoping to see a similar oversized bulk and price-point for that release as well?