Hasbro has given fans of the MCU Iron Man movies a lot of love over the past two weeks, including new Infinity Saga action figures of Tony in armors ranging from the Mark III to the House Party Protocol Midas armor to his final battle Mark L armor. They’ve given us figures of Iron Man’s wife and even his personal chauffeur. And now? Now it’s time for his first arch-enemy! The rumors are true, but there’s a bit more to it: the Infinity Saga Marvel Legends Iron Monger and Obadian Stane figures two-pack is now up for order! 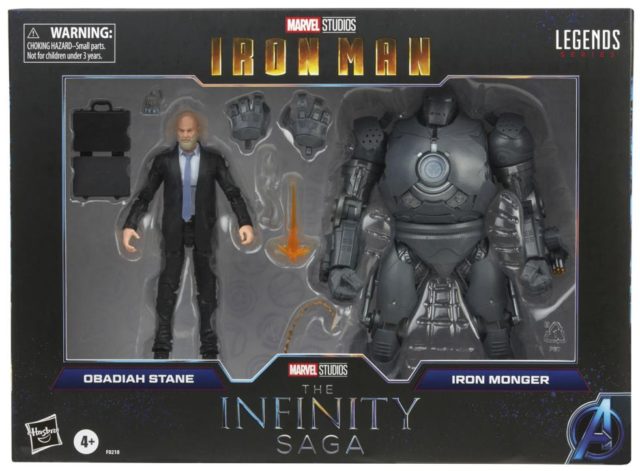 A leaked list of names for quite a few of the figures and multipacks that would make up the Marvel Legends Infinity Saga series has been making the rounds for a while now, and has proven to be uncannily accurate, so it was not a shocking moment today when the new and oversized 6″ scale (but not 6″) ML Iron Monger figure that was listed in those leaks turned out to be a real thing coming as part of the wave.

But the leaks did miss one fact, and it’s the thing that makes me happiest about this new set: Iron Monger is actually coming with Hasbro’s very first figure of Jeff Bridges as Obadiah Stane! I really, really dug Jeff Bridges as Stane in the movie, and never expected to get a civilian figure of that character, so this is a real treat. 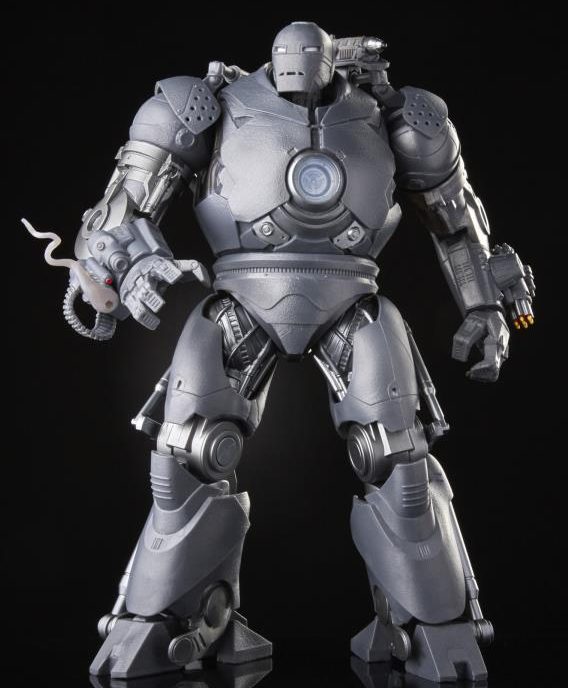 Hasbro did do a sort-of-six-inch-scale movie Iron Monger figure way, way back, but that figure is very dated now and was in dire need of an upgrade. And here it is, with a modern level of Hasbro design team detailing work! 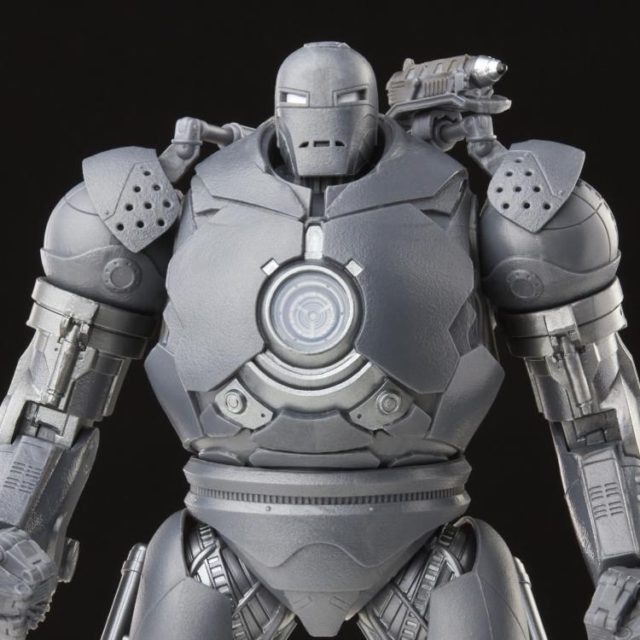 With the exception of the fact that the original MCU Iron Monger Legends figure had an opening cockpit hatch that could be raised to reveal the head of Obadiah Stane inside, there’s really nothing else that that older figure has over this new iteration. There’s simply more details this time out, which is what the name of the Marvel action figure game is these days. 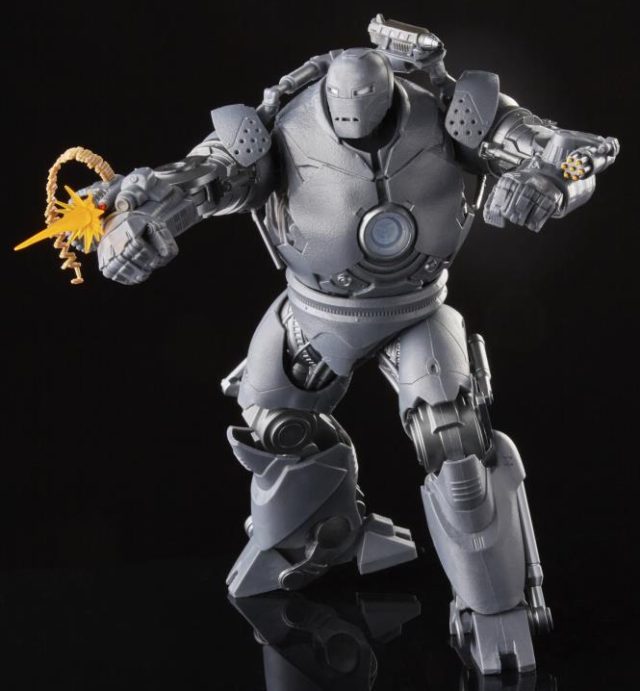 The ammo clip and effects piece blast (or smoke effect, if you prefer) for the right arm add a lot to this for display purposes, and the interchangeable hands are absolutely worthwhile since the old figure was limited to one set of hands. As far as an action figure of movie Iron Monger goes, I really don’t know that it can get much better than this (without being a Hot Toys, mind you). 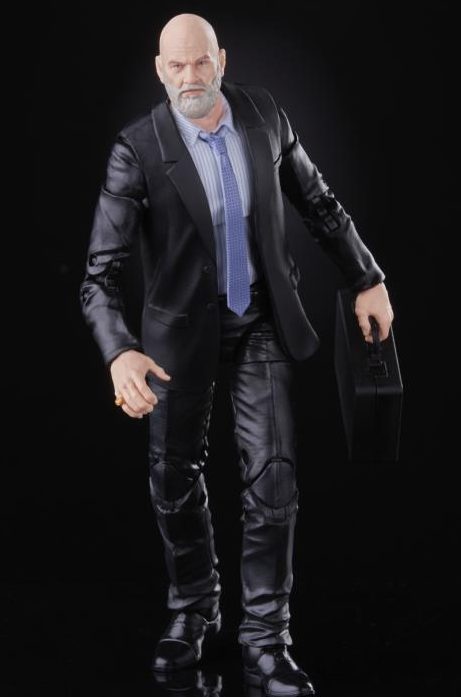 But while Iron Monger is cool and all (I guess–I’ve never liked the hulking armor permutations all that much besides the AOU Hulkbuster), Jeff Bridges spends most of the 2008 Iron Man movie hanging out in his business power suit. 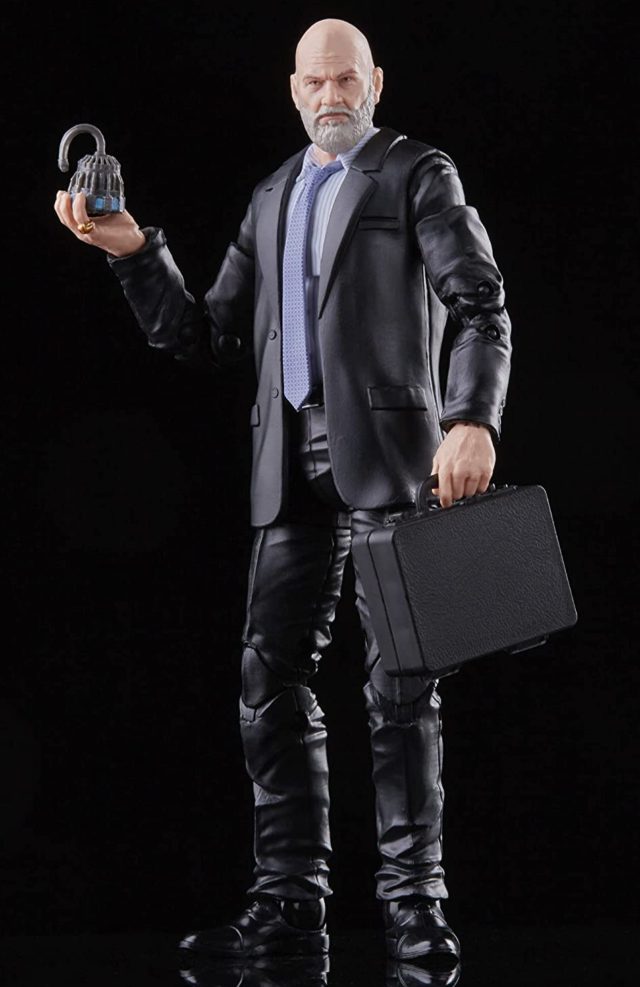 I felt a lot more menace from Obadian Stane out of the armor than in it, so I am jazzed to see this 6″ Obadiah Stane Marvel Legends figure being packed in with Iron Monger–almost beyond any shadow of a doubt the only super-articulated action figure of Stane that is ever gonna happen. 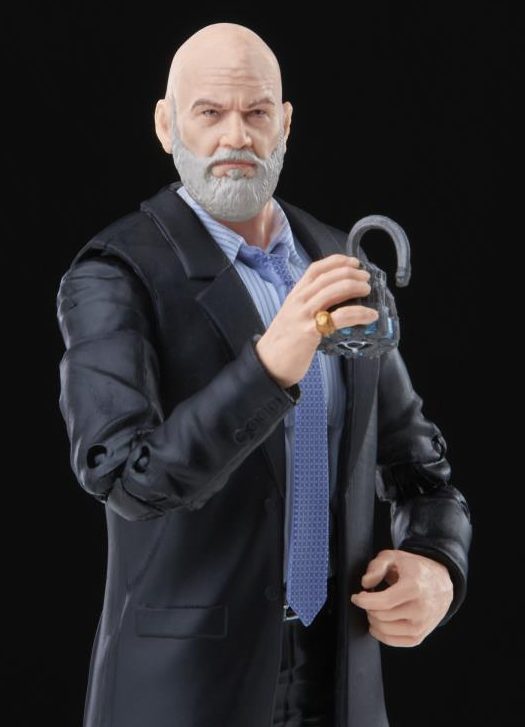 The beard, the tie, the shirt, the eyebrows… this is hands-down one of my favorite “civilian” figures that Hasbro has ever gifted us. He’s got a suitcase and an ARC reactor, and he just might be planning to betray and murder you. Love it. 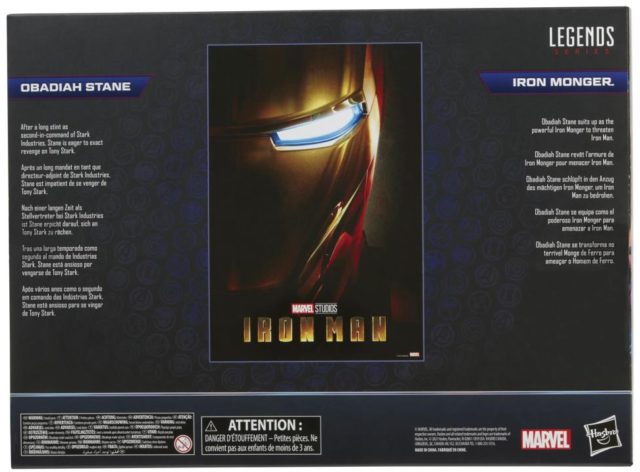 The two-pack has a $72.99 price-tag (and a dollar more than that on Amazon), so I think that price may deter some shoppers. I don’t think that it’s an especially unfair price since there’s a bunch of new and unique tooling here and Iron Monger is oversized, but I do think this might have seduced a few more collectors at a $59.99 MSRP (especially seeing as how not everyone will be as giddy about a dude in a suite and tie as I am). 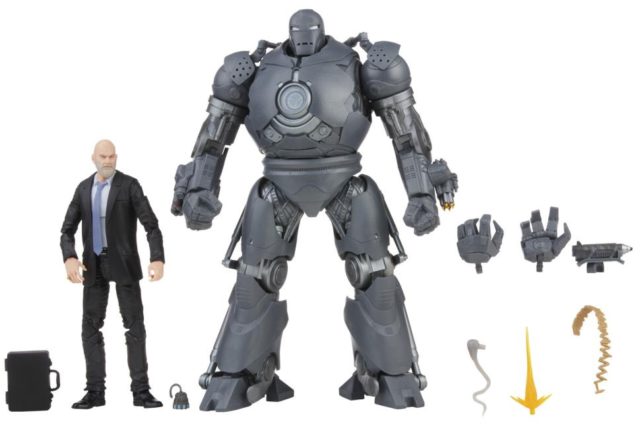 The Marvel Legends Obadiah Stane and Iron Monger Infinity Saga two-pack is estimated to ship in August/September 2021 (EE lists August, while Amazon and BBTS list September currently–not a total surprise since EE generally gets new figures first as a distributor).

I am far from the world’s biggest Iron Monger fan and I possibly could have skipped this if it was a single-pack (although I am weak, so maybe not), but the allure of a Marvel Legends Jeff Bridges super-articulated figure has captured my attention (and my 73 dollars). Nice surprise by Hasbro! What do you think of this duo, Marvel collectors? Buy or no buy?