Hasbro has been heavily hyping this week’s Hasbro Pulse Fan Fest, and they didn’t disappoint today with a double-digit number of new Marvel figures revealed! And while leaks had definitely spoiled some of the surprise of the 2021 Marvel Legends Iron Man series, it’s still one of the most eclectic waves around–and with one of the most unexpected Build-A-Figures in Ursa Major! The Iron Man Legends Ursa Major BAF series is now up for order: which figures are on your “must-buy” list? 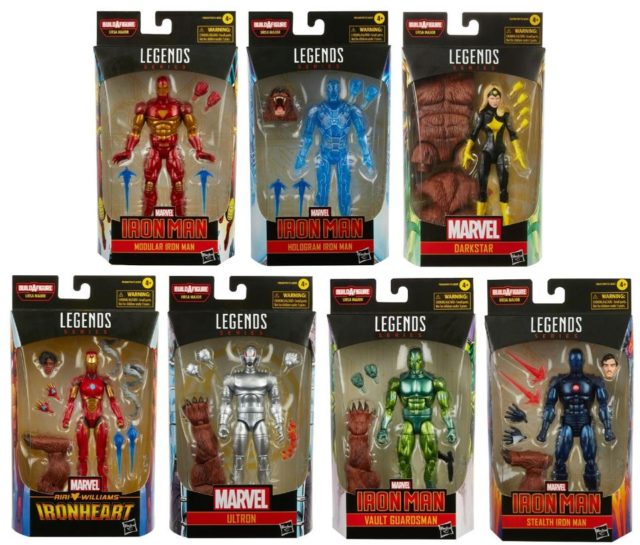 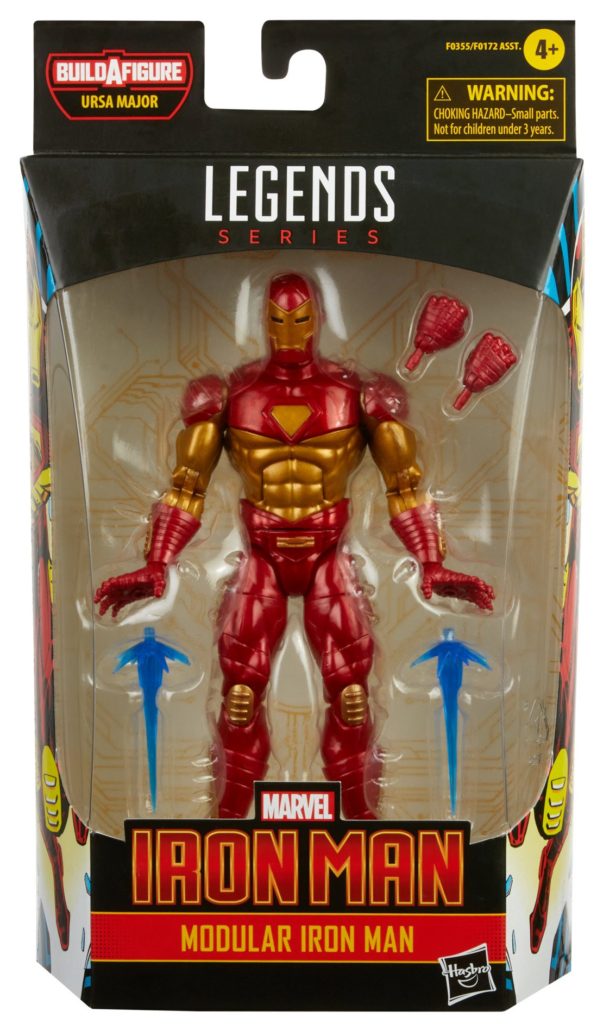 First up, we’ve got Marvel Legends Modular Iron Man! This is Iron Man as I remember him from the 90s cartoon where I first took a liking to the character, and the de facto iconic design in my head for Iron Man. I’m amazed it’s taken this long to get this armor, and I am pleased that he’s double-packed so he won’t be hard to find in stores (theoretically). Looks nice, and I appreciate the open palms/fists and repulsor effects. 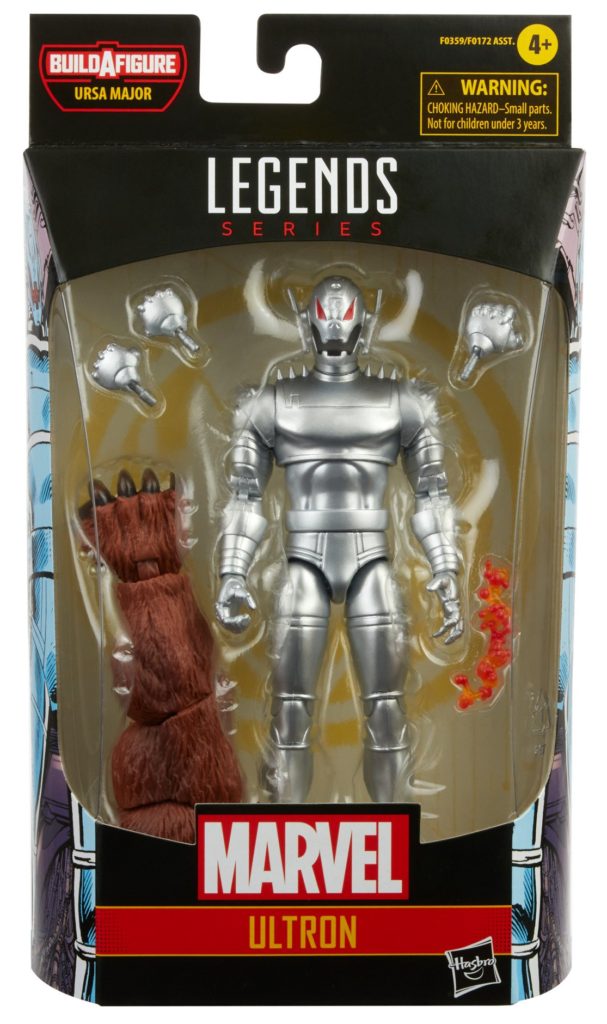 The figure that is basically fated to be the most scalped and sought after character from this wave is almost certainly going to be this classic Ultron Marvel Legends figure. This is the definitive comic book version action figure of this character, in my opinion, and the energy effects for his mouth are basically the coolest thing ever. The glossy, polished silver paint that’s not too metallic is also a smart pick for the deco. Nice work, Hasbro–perfect all-around at a glance. 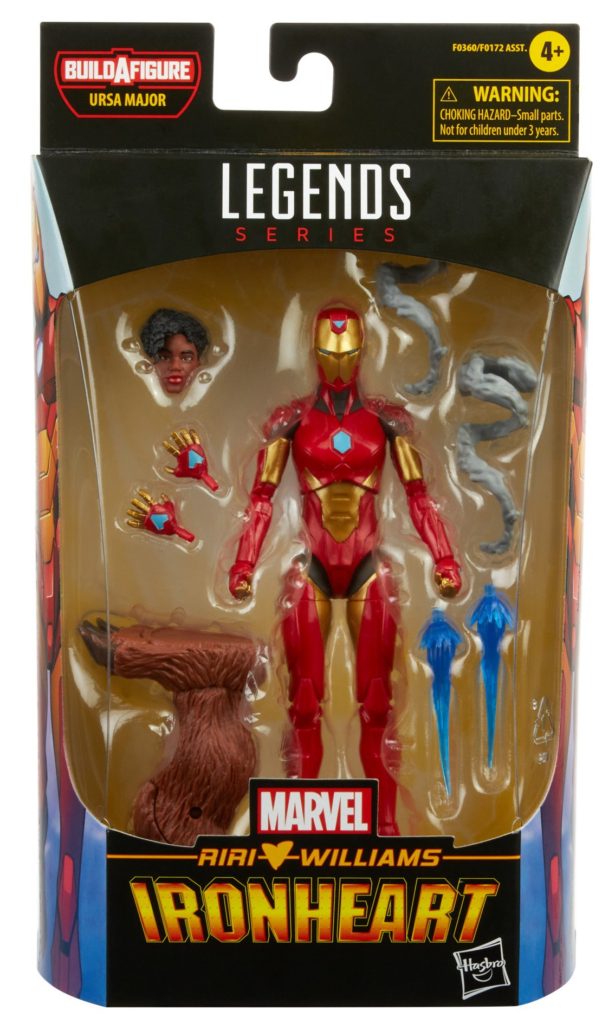 Okay, Riri Williams has not exactly become the hottest new character of the last decade at Marvel with a lot of folks outright disliking her–but I need a Marvel Legends Ironheart is stick with my Champions roster, so I’m glad to get her nonetheless. The unhelmeted Riri Williams head is a real treat, in my opinion, and I dig those smoke effects. Another great effort here. 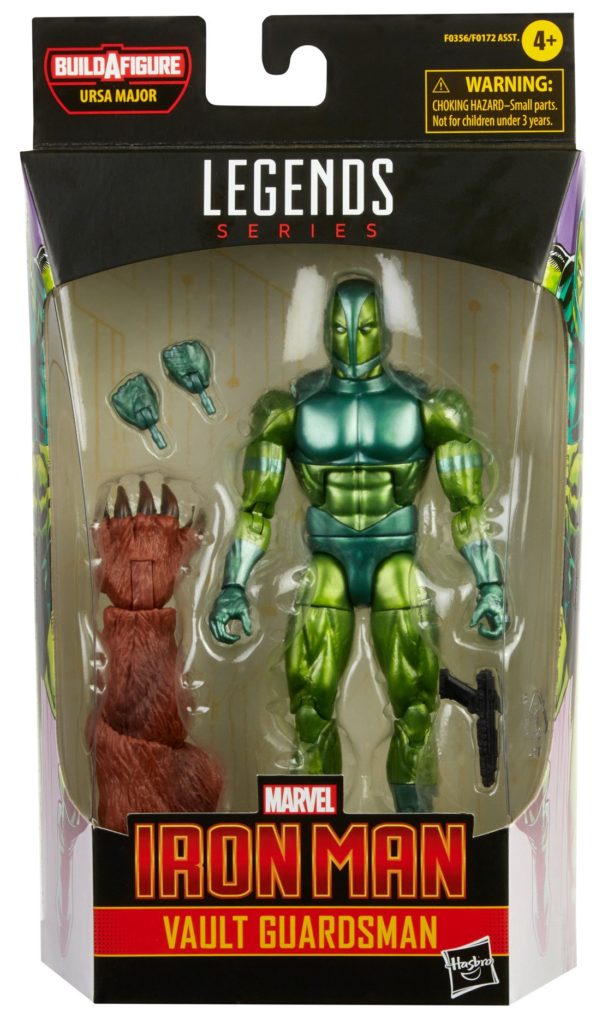 Nothing says “90s Iron Man” in a wave with Modular Iron Man quite like a Vault Guardsman, right? I think many fans will want two or more of these, and I’m one of them. A long overdue arm-builder (of a sort), with lovely green shiny metallic paints. I’d expect these to rival Ultron as best-sellers in the wave, even if they are a mite obscure compared to some army-builders. 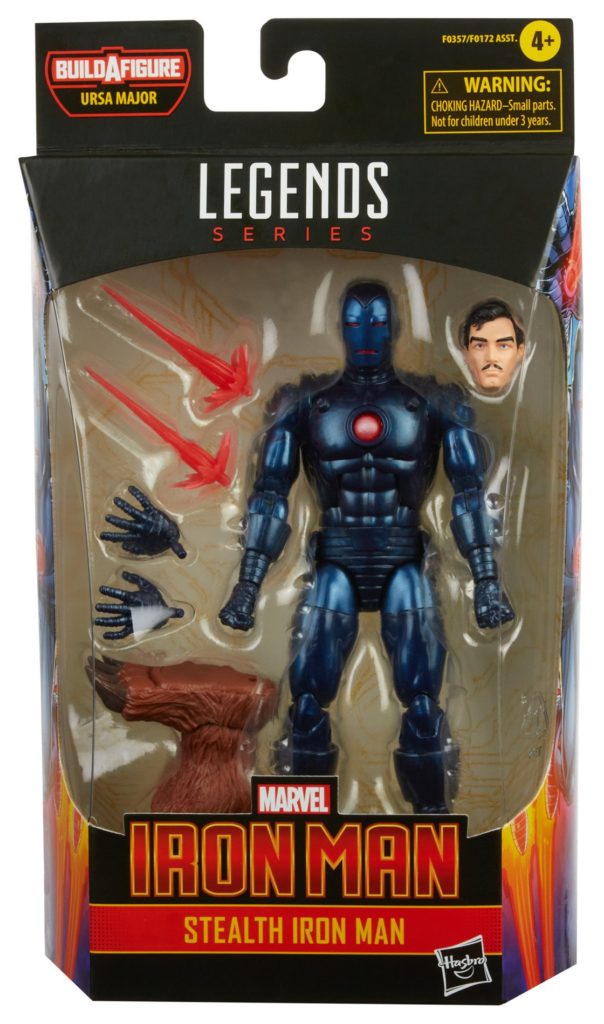 Easily the most recognizable non-red Iron Man armor from the comics, I never have a problem with Stealth Iron Man merch. I love the crap out of this particular armor permutation in the blue color scheme, and the (slightly odd-looking) Tony Stark comics head here is a slick inclusion. Glad to finally get what seems like an “ultimate” version of this armor. I don’t think we’ll need to see it upgraded again. 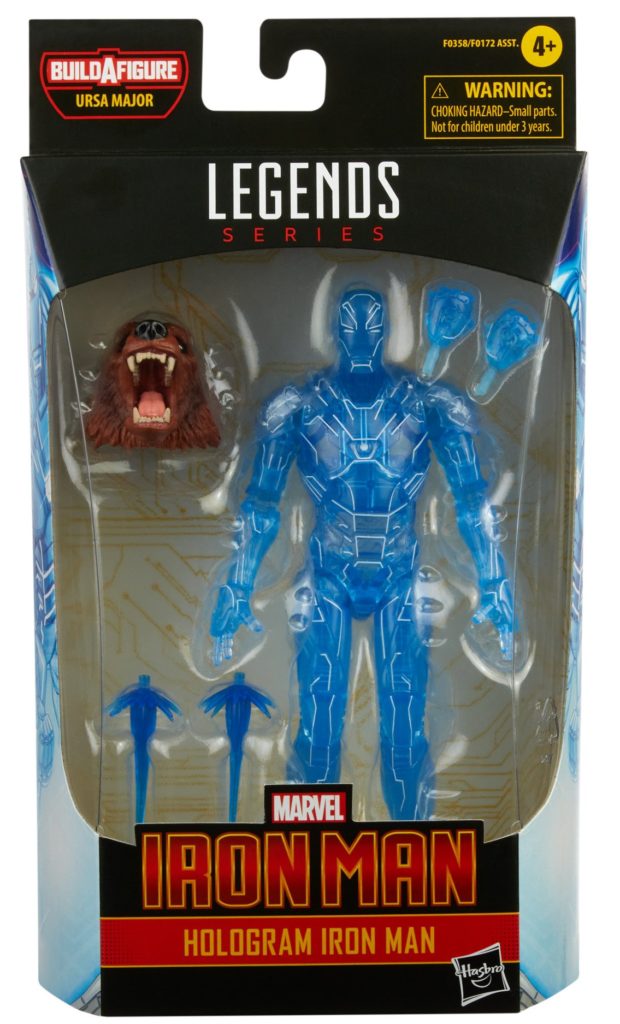 Unquestionably the weakest of the trio of Iron Man armor permutation in this series, I actually think the Hologram Iron Man here is pretty snazzy. The blue translucent plastic here looks super-cool, and reminds me of Star Wars holographic figures. Variants like this one will definitely be a pass for some fans, but I’ve got no gripes–aesthetically, this is stylin’ and I’m happy to buy it. 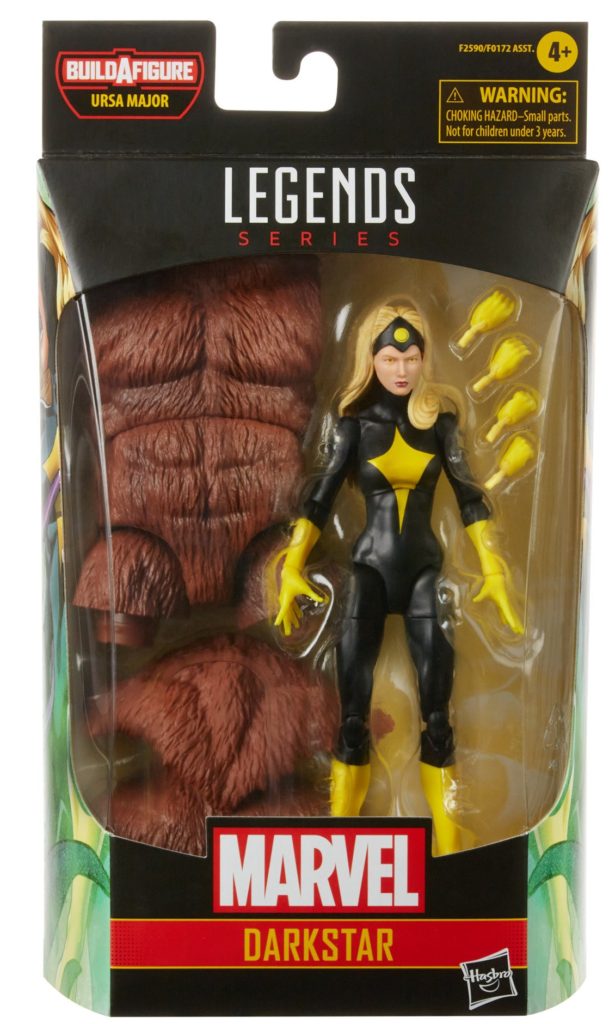 The Soviet superheroine is almost unquestionably the least-known character in this wave–and one of the most mainstream unknown characters in any wave this year–so pairing here with the largest pieces of the Ursa Major Build-A-Figure body was absolutely the right call. 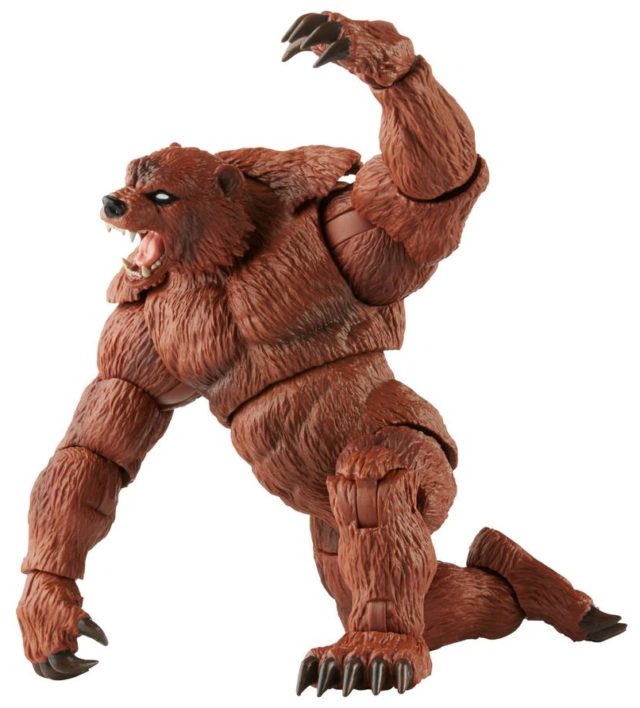 And that brings us to the Ursa Major figure. I can’t call him the most obscure BAF of the year given that we got that Tri-Sentinel a couple months back that appears in literally a handful of panels, but this is definitely still a deep dive by Hasbro. Honestly, though, this is an awesome super-articulated bear action figure–I think this may have quite a bit of appeal to even fans who aren’t super-familiar with the Winter Guard. 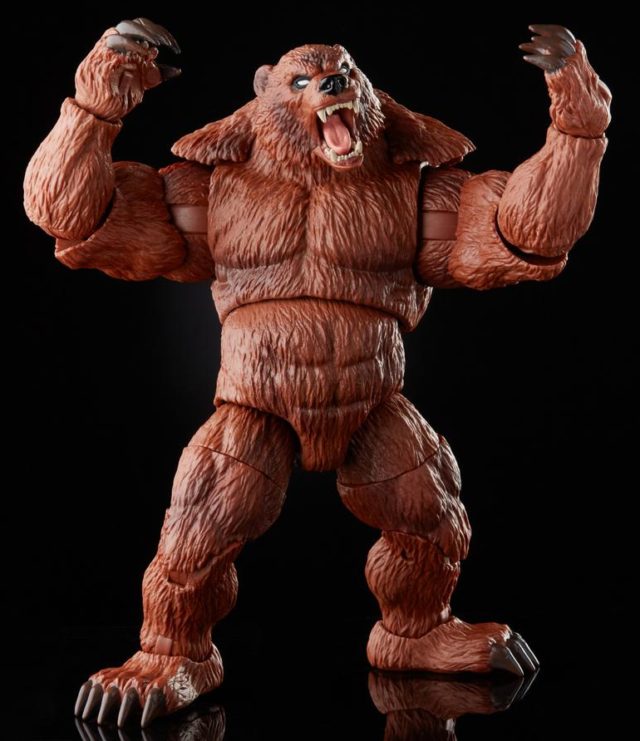 Overall, even though I was a bit apathetic toward the notion of a whole Iron Man-themed ML wave this year when the rumors first began circulating, I don’t mind this series much at all. Smart choices for all 3 Iron Man variants, much-needed figures of Ultron classic and Ironheart, a 90s army-builder in Vault Guardsman, and an interesting/unique Build-A-Figure. I’m a bit cold on Darkstar personally, but I still appreciate that we’re getting such an obscure heroine.

What do you think of this newly-revealed wave of 2021 Marvel Legends figures, Marvel collectors? Are you buying this whole wave to build the Ursa Major BAF, picking and choosing just a favorite or two, or passing on this wave in its entirety?