Begun, the Carnage wars have! Carnage has long been one of the most popular and recognizable villains in comic books, and over the last couple years we’ve gotten new collectibles of the serial-killing symbiote from almost every major company (including Hasbro, Kaiyodo Revoltech, Sideshow Collectibles, Funko, Diamond Select Toys, Gentle Giant and more). And so it should come as no shock that another company is now ready to enter the ring: the import Medicom MAFEX Carnage figure is now up for order! With so much competition out there, can the Carnage MAFEX really stand out…? 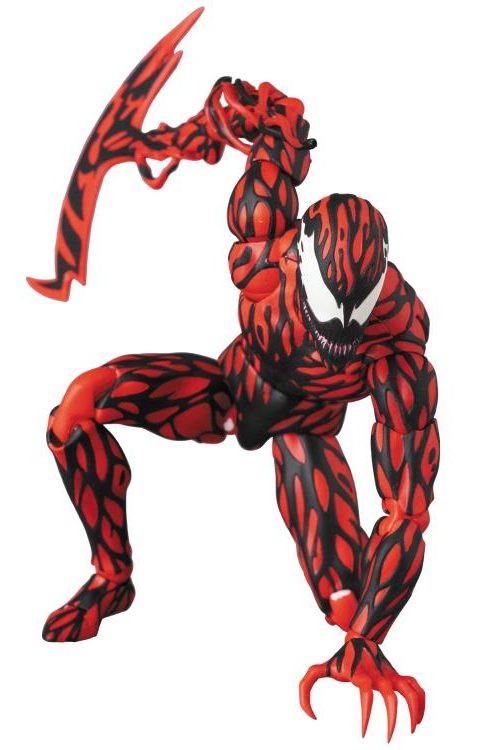 Even double-packing him at two-per-case, last year’s Venom Marvel Legends Carnage figure was a grand slam for Hasbro that quickly sold out and inflated price-wise on the aftermarket. So clearly, the demand for 6” scale versions of the crazy killer symbiote has not yet been met!

While Hasbro doesn’t have another Cletus Kassidy lined up any time soon (as far as we know), that’s left the battlefield clear for Medicom Toy to launch their first-ever Carnage action figure of their own—and what a figure it is! 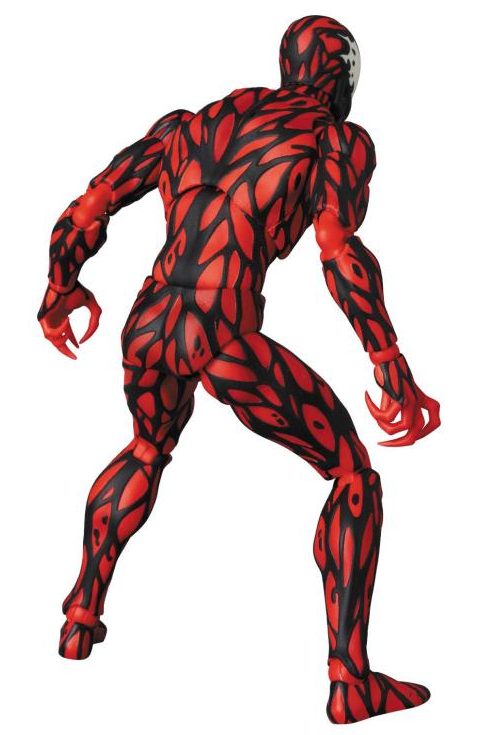 Whereas Marvel Select and Revoltech opted for slightly grittier and more “realistic” versions of the character, Medicom Toy has gone forward with what is unquestionably the most comic book-y Maximum Carnage-era iteration in the land! 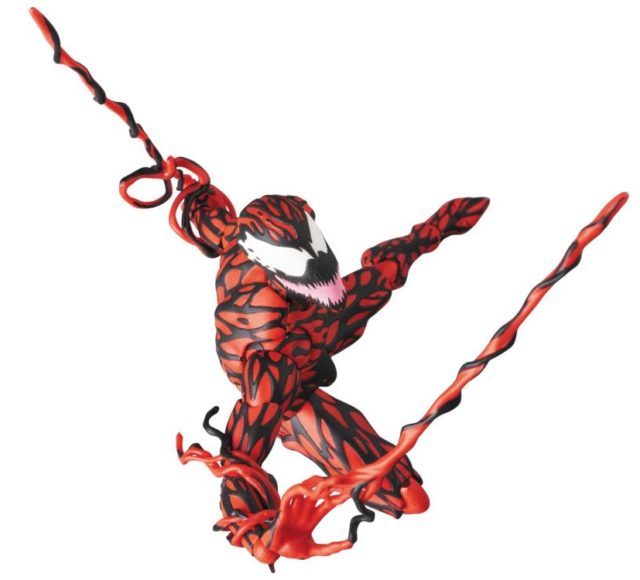 The simple, smooth-looking body mold on this Carnage MAFEX figure looks straight out of the 90s, and forgoes adding any unnecessary extra textures or sculpting work that would cause the design to diverge from the purely classic comic book approach. 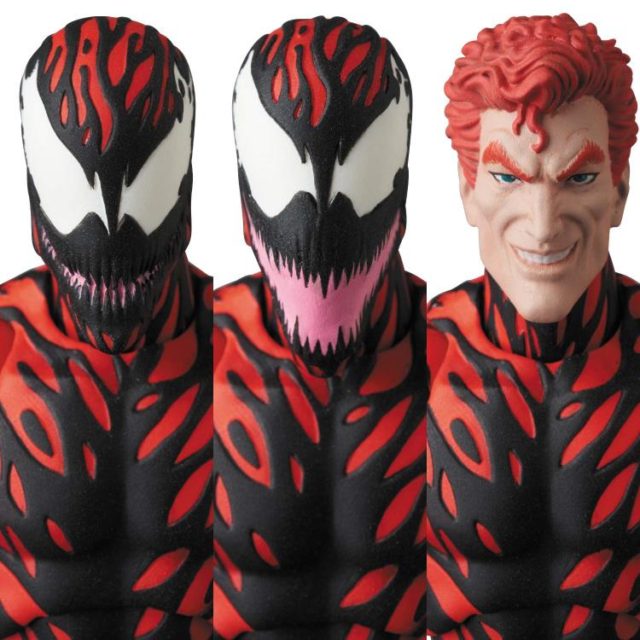 I would have scrunched my face up dubiously if anyone had told me Medicom would just paint mouths onto two smooth, rounded faces to any degree of success—but they have made me eat my words. Both the wide-mouthed and almost-closed-mouth heads look dead-on accurate and amazing.

I never particularly care about Cletus Kassidy heads since Carnage “unmasked” is drastically less cool than “masked”, but I think the Cletus head here is as good as any for those who choose to display him that way (which will most likely be few collectors). 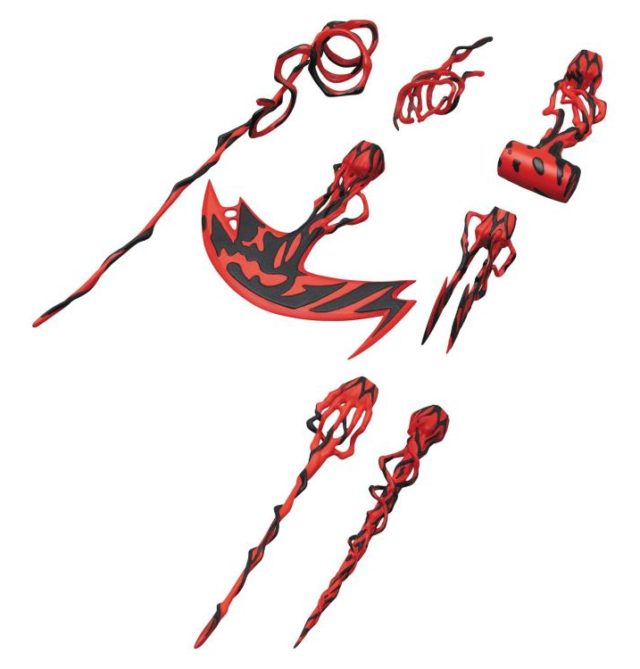 While there’s not a jaw-dropping arsenal of accessories included here as there were with the Kaiyodo Amazing Yamaguchi Revoltech, we do get seven deadly and desirable weaponized symbiote tendril effects pieces in addition to the three portraits. The claws and scythe are typical choices, but I love the creativity of including the mallet. 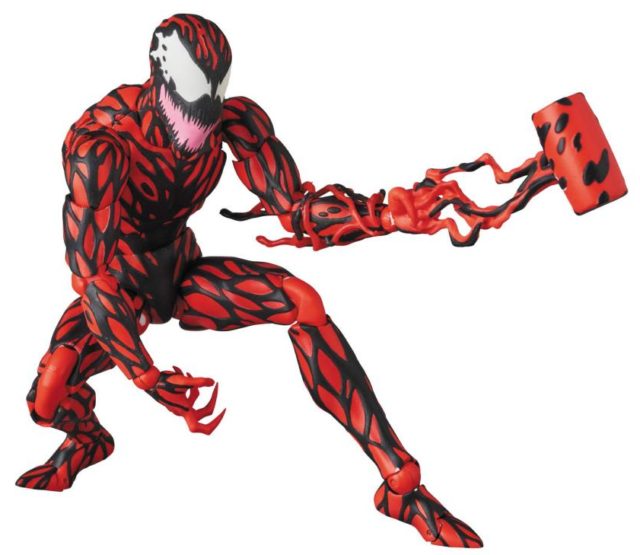 Of the Marvel Legends scale Carnage toys that are available in the collecting sphere, this is probably my singular favorite comics version of the character that any company has done. But as usual for premium import figures like this one, there’s a catch: the price-tag.

Like Kaiyodo, Medicom Toy does not have a license to distribute their 6” Marvel figures in North America. That means that already high-priced items like this one jump from $70-$80 to $90+ after importing them yourself or getting them from an importer. It totally sucks—but if you want top-quality Japanese figures, it’s unfortunately the name of the game. 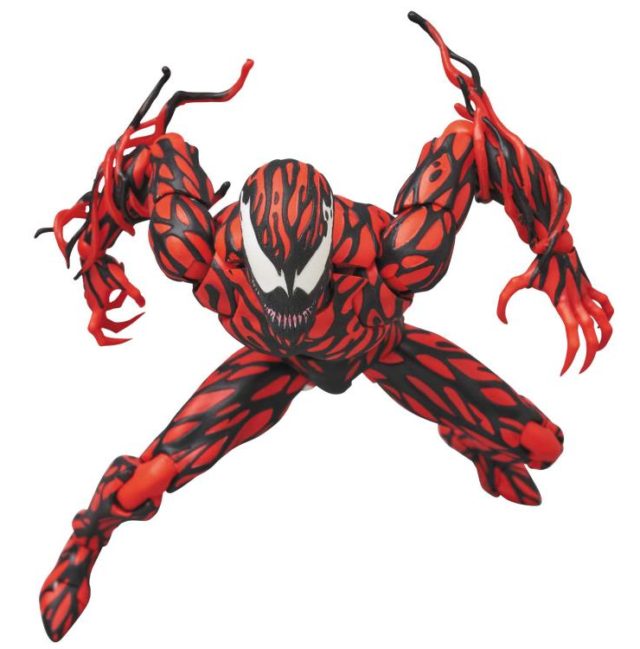 The Medicom MAFEX Carnage action figure is now up for pre-order via importers like BBTS, and can also be ordered directly from Asia via “the usual suspects” of import stores such as Amiami and the like (although then you’ll be paying the pricey import freight yourself to get him that way).

How does Medicom Toy’s take on Cletus Kassidy compare to all of the other rival companies’ entries? Is this the best Marvel Legends-scaled Carnage action figure in the land—and if so, is it worth its hefty price to obtain?