It’s hard to believe since the perception of time went all screwy when a pandemic threw off the rhythm of the entire world, but it’s been over a year-plus now that we’ve known Iron Studios had an exclusive 1/10 scale Juggernaut statue on the way as a stand-alone (separate from the Sentinel) part of their X-Men statues series. Cain arrived internationally months ago, but the time has arrived for US folk: the limited Iron Studios Juggernaut exclusive statue is now up for order only on Sideshow’s website! 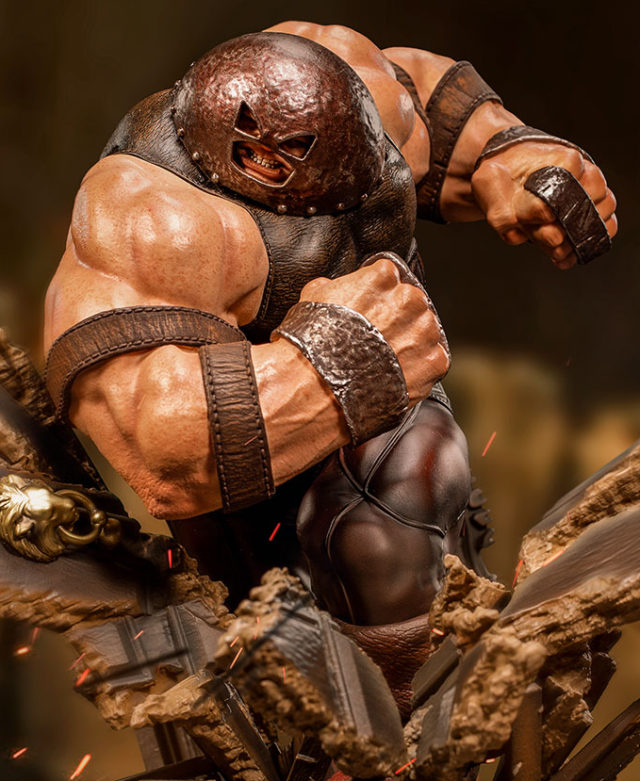 When I saw the first of the three Iron Studios Sentinel statues, it was love at first sight and I was immediately being seduced by the diorama’s dynamic style and accompanying Jubilee, Beast, Rogue, Cyclops and Wolverine statues. Ironically enough, that statue ended up surpassing my 1/4 Sideshow Juggernaut Maquette as the most expensive Marvel collectible I’ve ever purchased.

When I saw Iron Studios Sentinel #2, well… my face kind of scrunched up. The “scene” being created by the second Sentinel just doesn’t make a lot of sense to me, with Magneto seemingly controlling the fallen Sentinel while Juggernaut charges at… Gambit? (for some reason), in the middle of a battlefield with loads of other X-Men battling intact Sentinels. 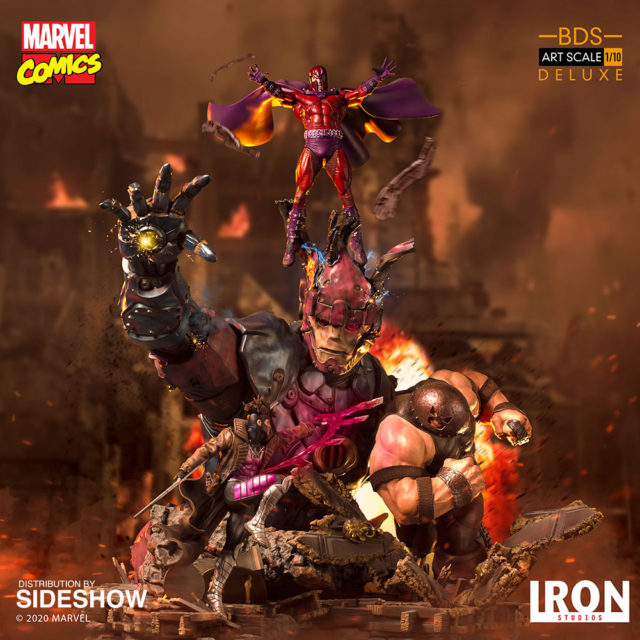 I love me some Sentinels, Magneto, Gambit and Juggernaut—but of everything in the Iron Studios X-Men series, the Sentinel 2 diorama just felt kind of half-assed. Luckily, we knew front the get-go that all three characters would be available separately from the Sentinel—and after a lengthy wait, the Juggernaut has finally joined the long-up-for-order Remy and Magnus. 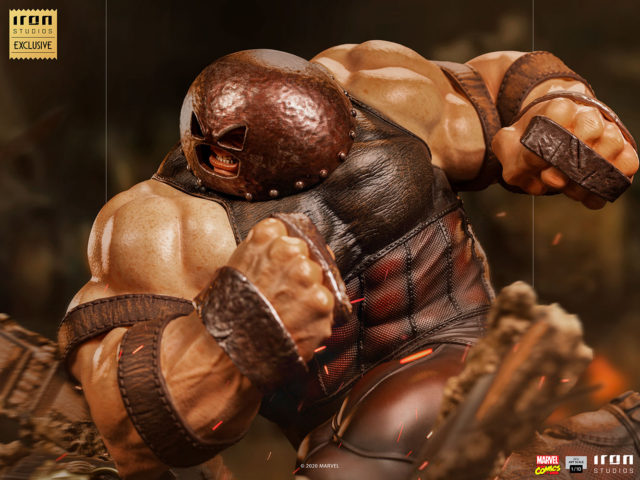 It appears that the actual reason we’ve had to wait so long for Cain Marko to appear is that Sideshow was waiting to have him physically in-stock so they could sell him as a 2021 Sideshow Con exclusive. I’ve got no beef with this, as it’s nice that he’ll ship tomorrow and I never really doubted we’d be getting Juggernaut here in the United States. 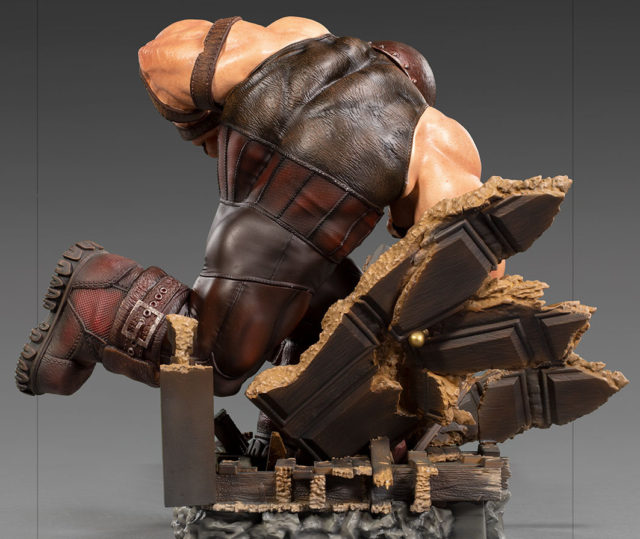 Rather than aimlessly attacking Gambit for no reason, this Juggernaut BDS is exploding through a building (presumably the X-Mansion) in one of his trademark unstoppable running poses. 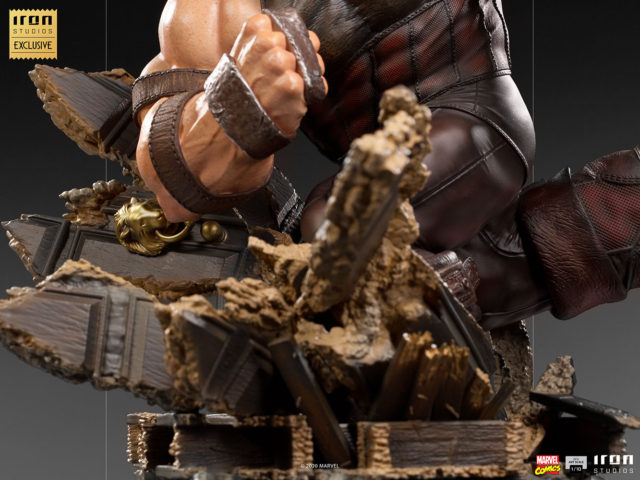 This base makes more sense to me than how Juggs was set up in the actual diorama, and I think the base is appropriate and works well. 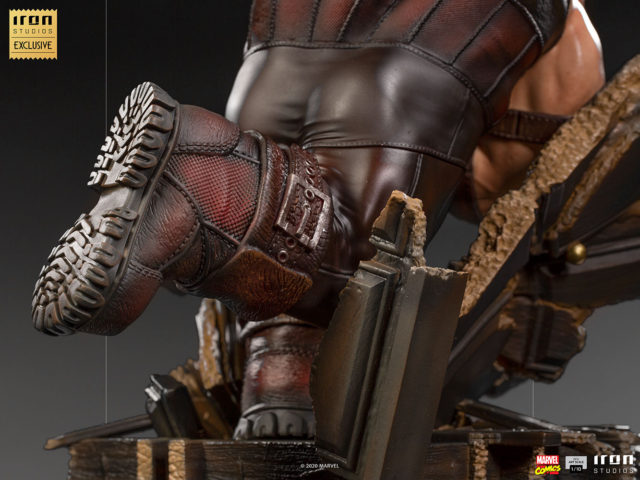 The figure itself is an all-around excellent depiction of the character. The treads on the bottom of Juggernaut’s boots, the leathery texture on his straps, the perfectly-chosen slightly different brown paints for different areas of his costume—this is just awesome. 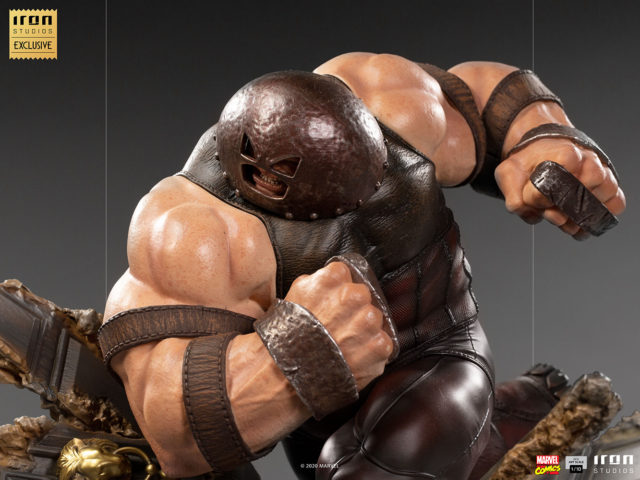 Iron Studios should be proud of the job they’ve done here. Their weakness is unquestionably face sculpts, but Cain’s helmet covers and mostly shadows his portrait inside, which works out perfectly. 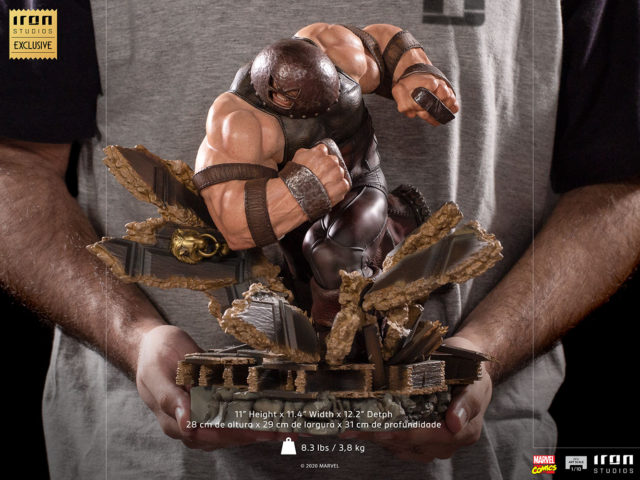 At 11” tall, 11” wide and 12” deep, this is actually a pretty sizable 1/10th scale statue, and the 8+ pound weight is significantly heavier than the vast majority of Iron Studios statues that aren’t giant robots. Given the size, heft and detail of this polystone resin piece, I actually think $260 is a bit of a bargain (don’t hit me) for this Juggernaut in the current marketplace. 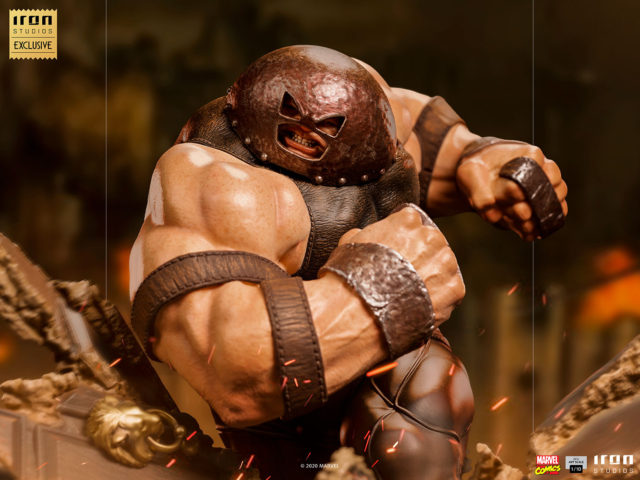 The Iron Studios X-Men Juggernaut statue is now up for order exclusively on the Sideshow Collectibles website, which is the one and only place it will be for sale domestically. Iron Studios statues, especially exclusives, basically always get expensive on the aftermarket and command inflated prices once sold out, so make sure to grab an unstoppable Juggernaut of your own for the MSRP while you can if you still want one. He ain’t gonna get any cheaper than this, folks.

Now that he’s finally smashed his way onto the scene domestically and is in-stock and ready to ship, are any of you planning to have this standalone Juggernaut BDS statue charge into your own collections? And for any fans who already have him in-hand from international sales, is Juggs as impressive as you’d hoped?