Fantastic Four may have been the primary plot-line of this week’s Hasbro Pulse Marvel Fan First Monday stream, but there were still a few nuggets of non-FF news to be found! And X-fans have got some things they knew about—and some they did not—to get excited about! For the first time ever, ShopDisney (AKA the online Disney Store) is sharing an exclusive with Hasbro Pulse: the exclusive Marvel Legends X-Force 3-Pack Cannonball, Domino and Rictor figures go up for order today at 1PM EST! If you ever wanted Cannonball with legs, asymmetrical Domino or wild 90s Rictor with luscious long hair, this is the set for you! 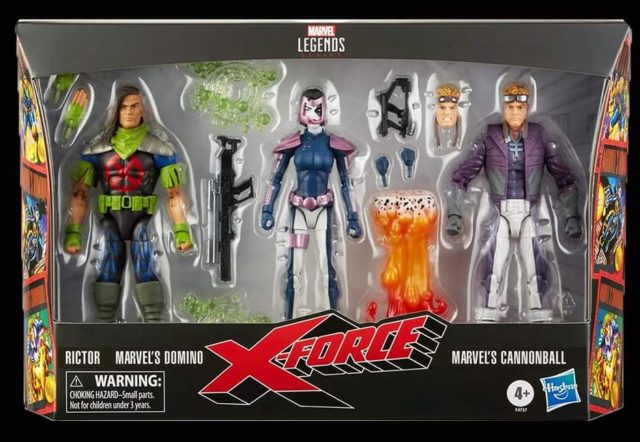 Hasbro had been teasing that a classic 90s Domino was on the way since NYCC 2019, and it seemed like a Cannonball with legs was an inevitability after the fan outcry over legs-less Sam, so no one was astonished when both figures were sneak peeked earlier this year.

But we didn’t know how or where these 1990s X-Force Legends figures were going to be released until today—and we definitely didn’t know that they’d be coming in a triple-pack box set with a 90s Rictor Legends figure! 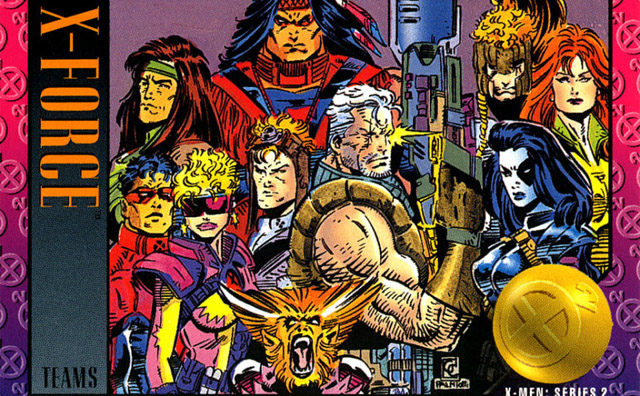 Upon a reread in the last couple years, I have discovered that I am not exactly as twitterpated with the original X-Force comic book as I was three decades ago. The stories are, well… not quite as good as I remember them. But even so, I’ll always have a nostalgic love of the costumes and designs from this era, so I am definitely game to see Hasbro round out the 90s X-Force roster in super-articulated form! 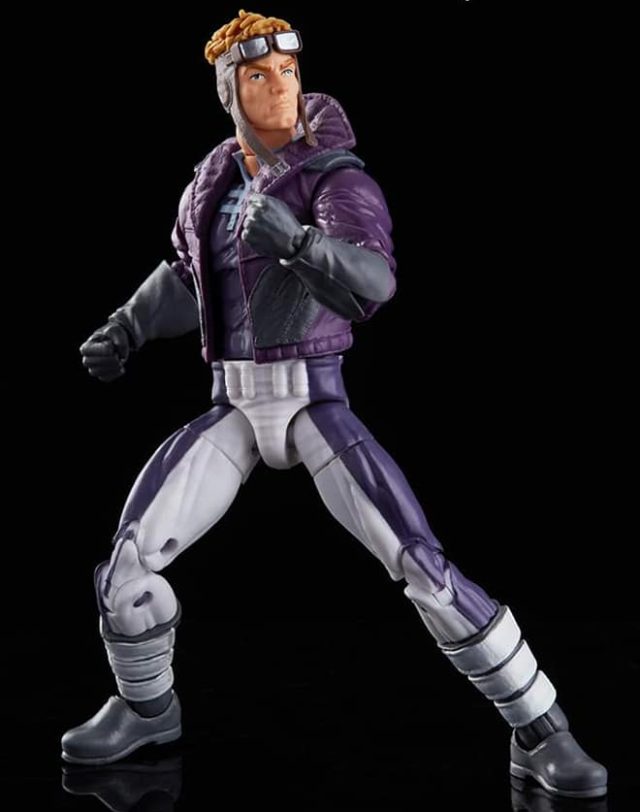 We got Cannonball back in 2019 as part of the Wendigo Build-A-Figure wave, but collectors immediately and vehemently cried foul about the fact that Sam Guthrie game with one big lower body blast effect and zero legs. Hasbro listened, and now we’ve got a new and improved Marvel Legends Cannonball—with legs!—on the way. 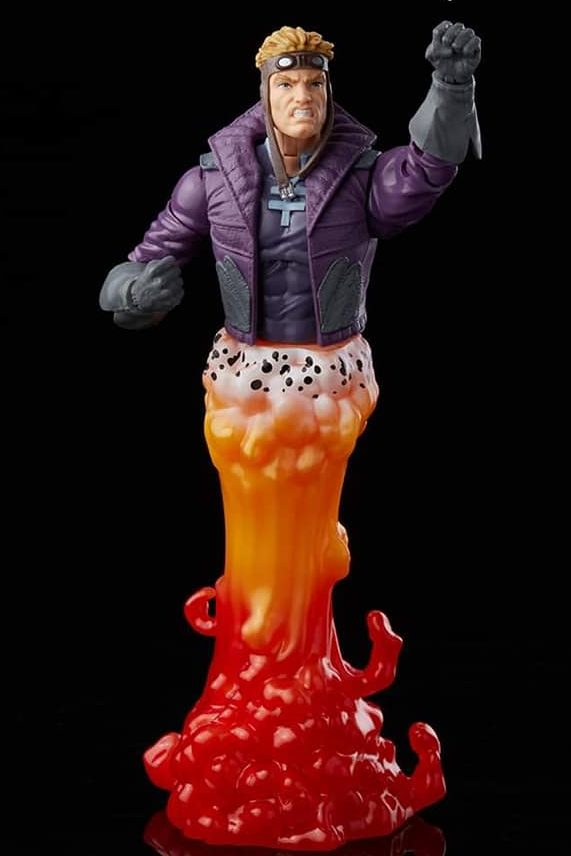 This is basically a repaint of the 2019 Cannonball figure with new legs, a new extra head (that’s pretty cool) and a better-colored effects piece lower body stand (for those who swing that way). I will be happy to use the new blast effects stand and head with my old Sam and stick these legs on the new one. Cool beans and glad to get this. (Now how about a New Mutants Cypher with alternate Cannonball and Sunspot heads, Hasbro?) 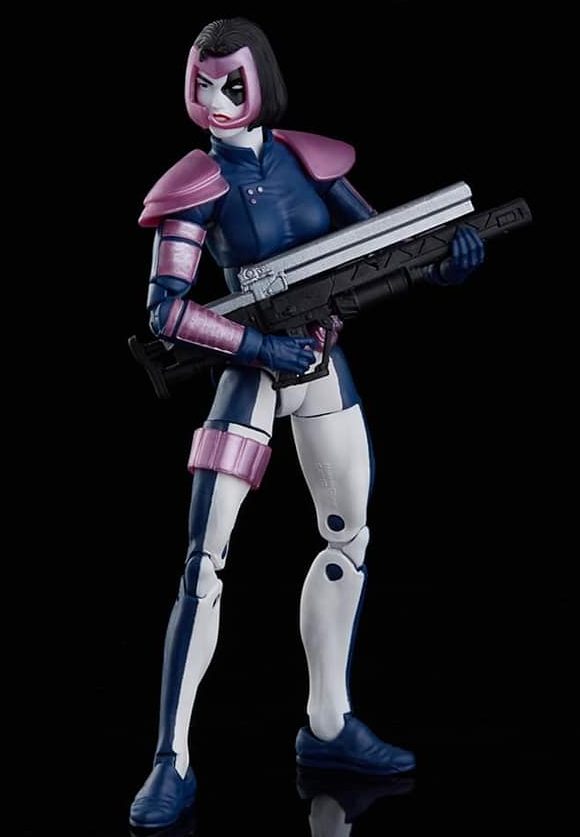 A more modern Domino X-Force Legends figure was released a couple years ago as well, but obviously that figure couldn’t seamlessly slide into a display from the early days of the team. And so, an updated ML Domino joins this multi-pack as well! 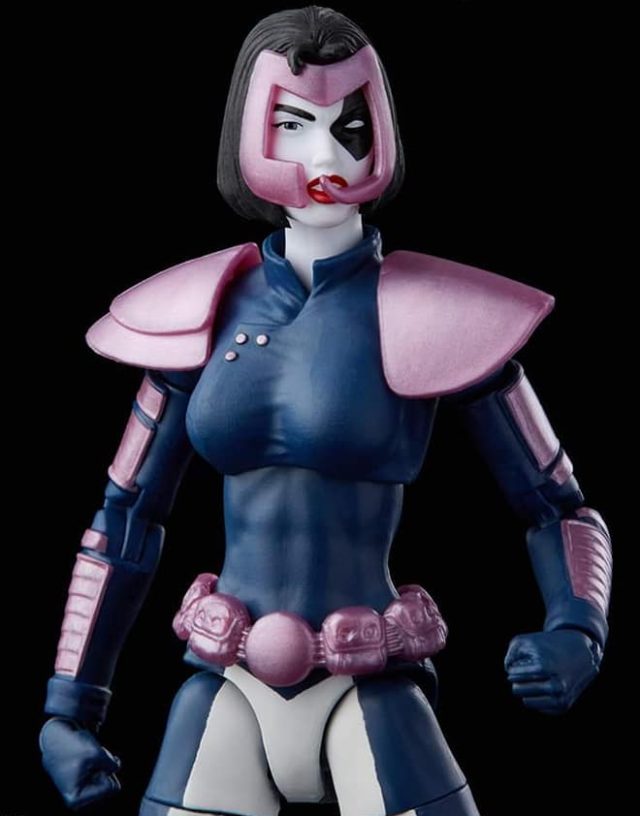 Although I’ve read the comic books with Domino in this 1990s costume dozens of times and seen trading cards and images of it hundreds more, I don’t think I ever really noticed the asymmetrical nature of the costume until it was pointed out during the livestream on Monday. Interesting stuff! 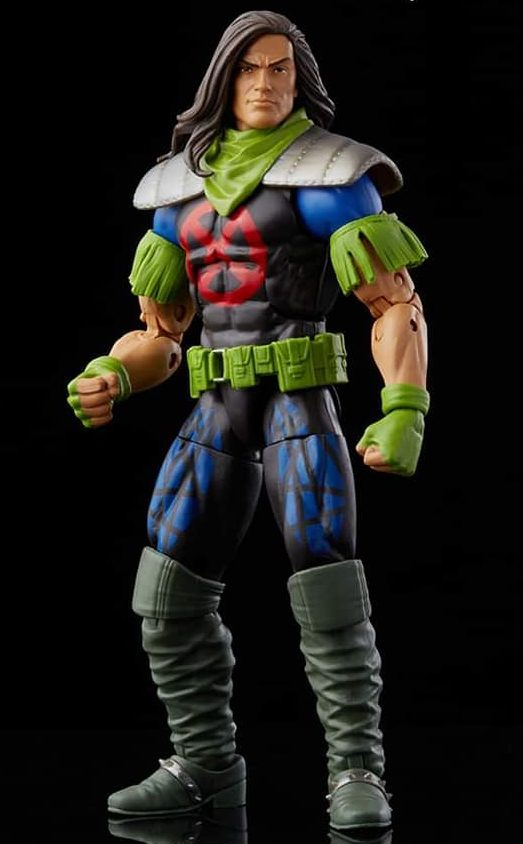 Rounding out the set is maybe the figure that epitomizes the era the most in the 3-Pack: the first-ever Marvel Legends Rictor! Rictor is a character I would adore seeing classic New Mutants or modern Excalibur (Druid King!) versions of, but X-Force certainly makes the most sense for as close to an “iconic” look as Julio has. 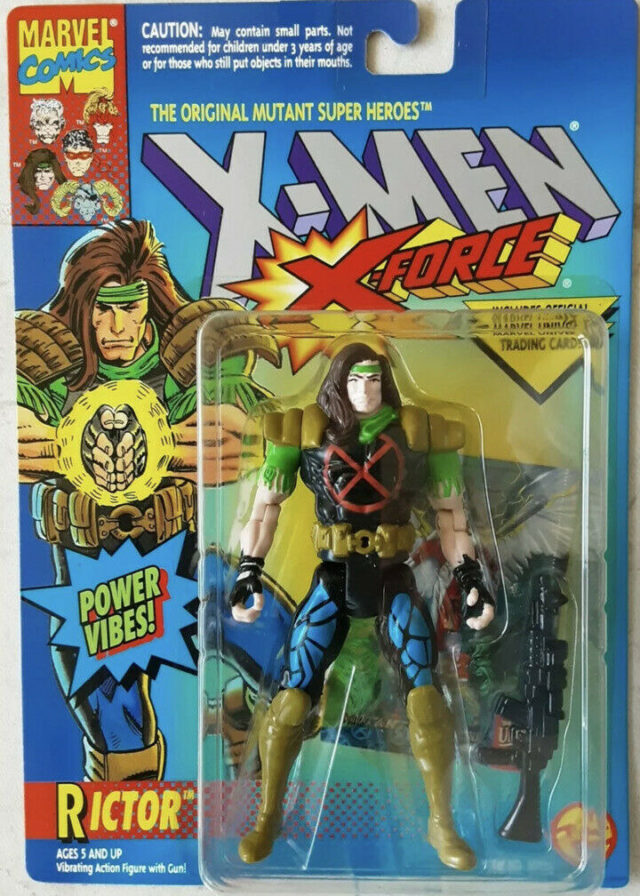 I had the vibrating (seriously!) Toybiz Rictor figure as a kid, so this is another release that totally takes me back and plasters a smile on my face. 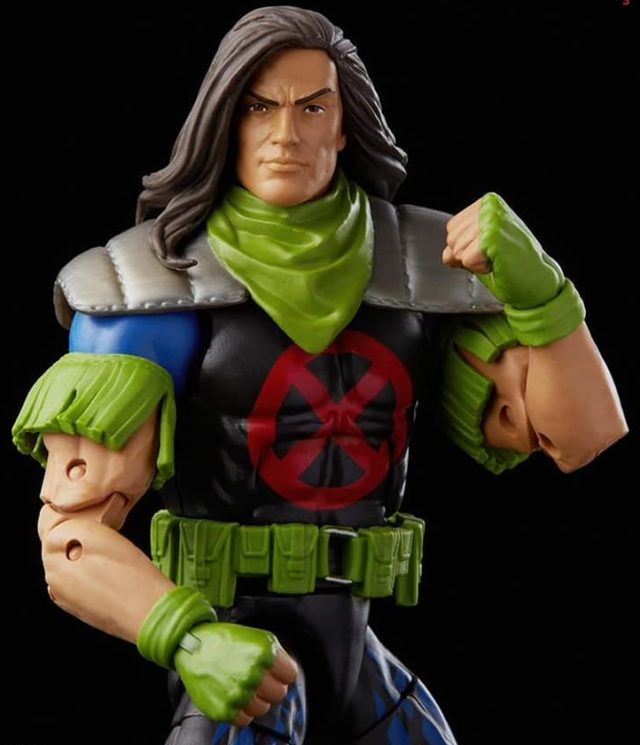 As pure 90s as it comes, Rictor has his super-long boots, bandana, mega shoulder pads and “luscious” hair! This is one of the funniest (and sort of most embarrassing) character designs to look at an action figure of, and I love it. 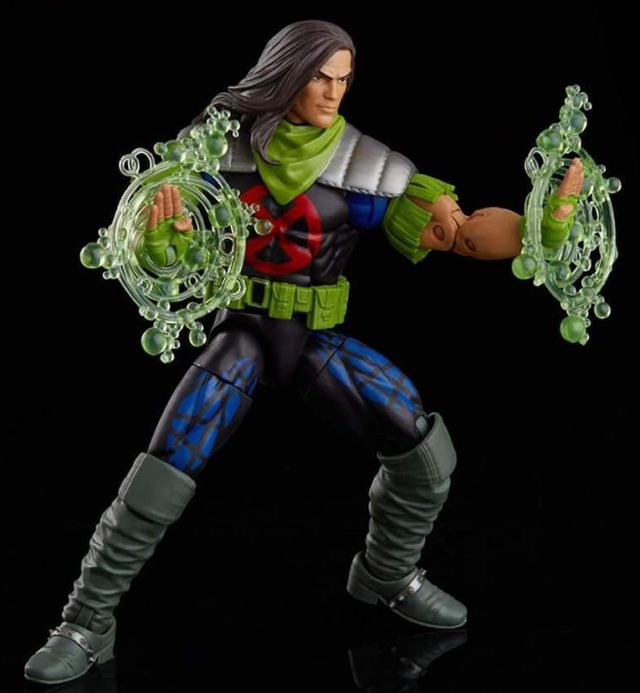 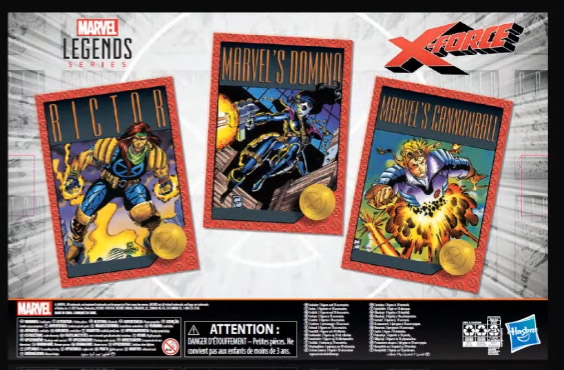 The packaging for this set is also really cool, as it falls back on the amazing Skybox Series 2 X-Men Trading Cards artwork from 1993 to really give this a terrific 90s throwback feel. You can see the legendary art from those X-Men Series II trading cards recreated on the back and side of the box. 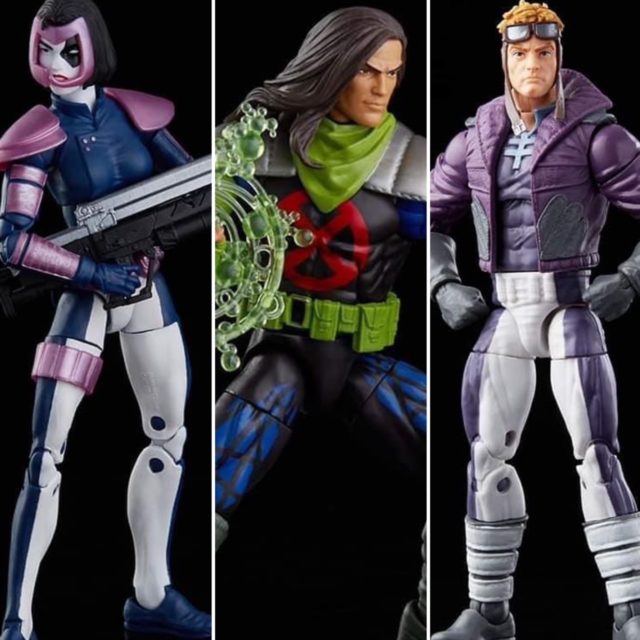 The Exclusive Marvel Legends X-Force 3-Pack will be available via the Shop Disney site and Hasbro Pulse today at 1PM EST. I would assume that Disney will get the bulk of this exclusive so that more folks buy it from them when it sells out via Pulse, but as this is the first ever shared exclusive with Shop Disney, who knows? We’ll have to watch closely tomorrow and see how fast this set sells out (presuming it does) at either site.

Is this set hitting just the right nostalgic chord with anybody besides me? This is a must-have for my classic X-Force Marvel Legends lineup, but is anyone opting to pass on Rictor and stick with existing versions of Cannonball and Domino? And hey—who besides me can’t wait for the Feral and Siryn Legends that havegot to be coming in 2022 (right…)?