I was planning to finish off the week by flaming on a review of the new Human Torch figure, but it turned out that there was a despot who demanded to be moved closer to Richards in the reviewing queue! Considered by many to be the greatest villain in the Marvel Universe (and even greatest villain period by some), the King of Latveria has already pre-sold out via sites like Amazon and BBTS despite being two-per-case. EE is still taking orders for the new Marvel Legends Doctor Doom figure for an arrival this month—is this a figure worth locking in if you haven’t done so already…? 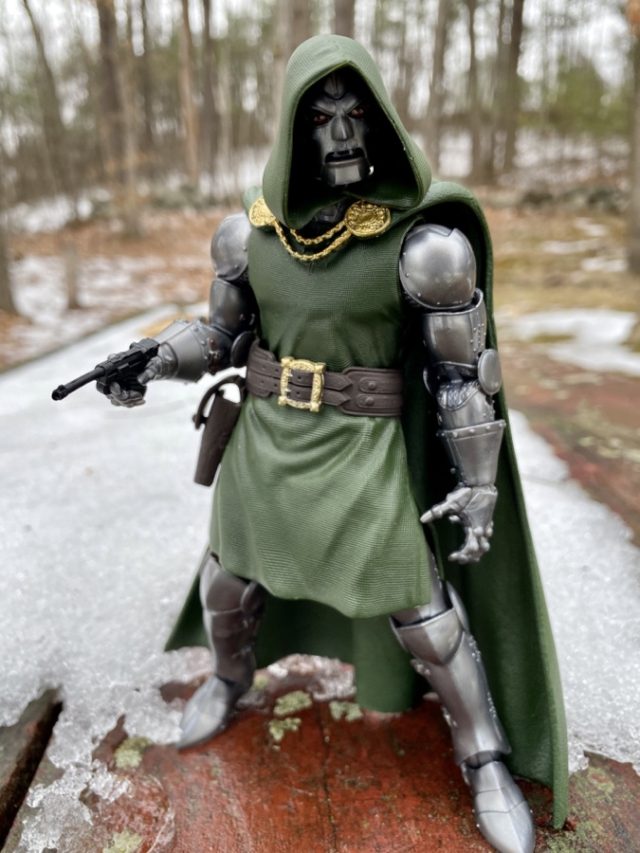 I made a tactical error with the sequencing of my series of Fantastic Four Marvel Legends reviews—and that error was focusing on the FF itself and not starting with the new 2020 Doctor Doom figure.

I’ve been inundated with folks asking when I’ll be reviewing ML Doom, so I’ll defer to the wishes of the masses and make Johnny Storm wait a wee bit longer for the spotlight. Sorry, Human Torch fans! 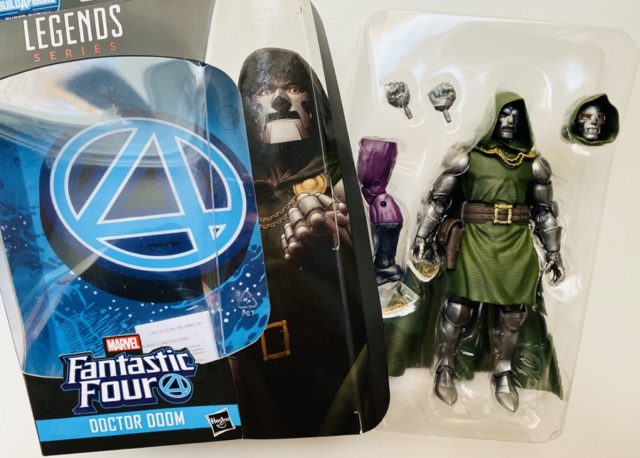 The last time Hasbro made a Dr. Doom Legends figure was way back in 2012 as part of the Epic Heroes series (the wave where we got an unpainted base instead of a Build-A-Figure part), and that figure was just a refresh of an even older Doom (although it did have a sweet Future Foundation Doom variant that I really wish I had). 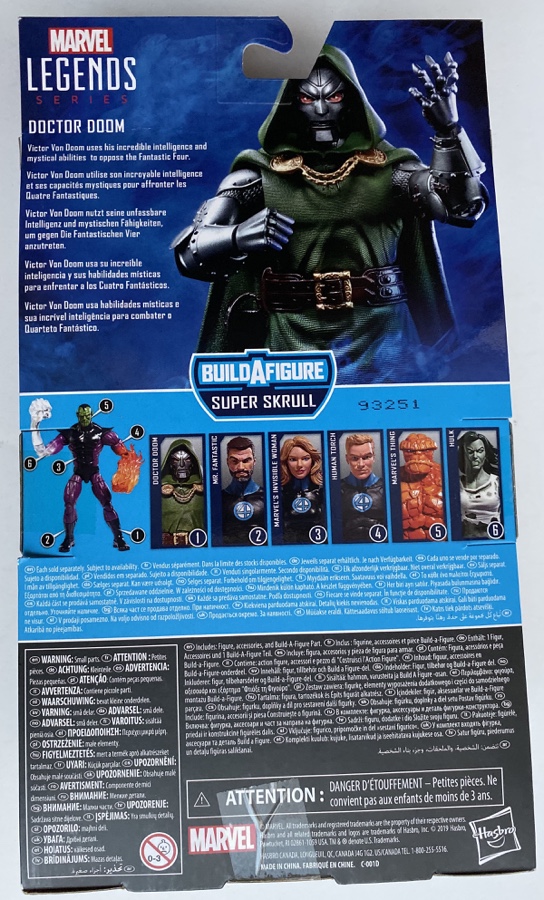 So the time was definitely right for an all-new action figure of Reed Richards’ arch-nemesis. Is the result a masterstroke for Hasbro…? Well, as it so happens, this $20 action figure is in actuality my favorite non-statue representation of Doctor Doom ever made! 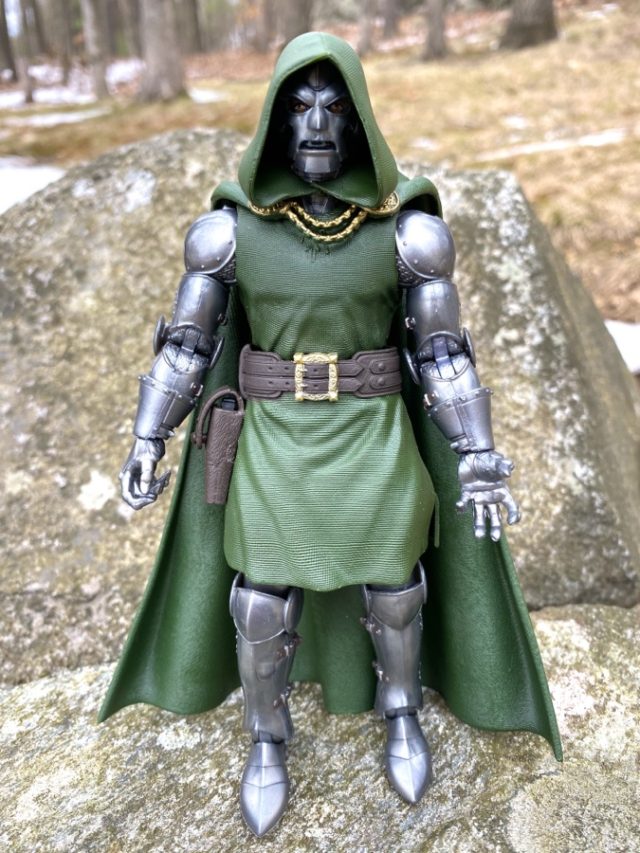 The first thing I noticed when removing this toy from the packaging is that the level of detail sculpted into this figure is absolutely insane. The sculpted texture on Doom’s tunic and cape don’t just have hundreds of little stitching details—there are easily thousands. 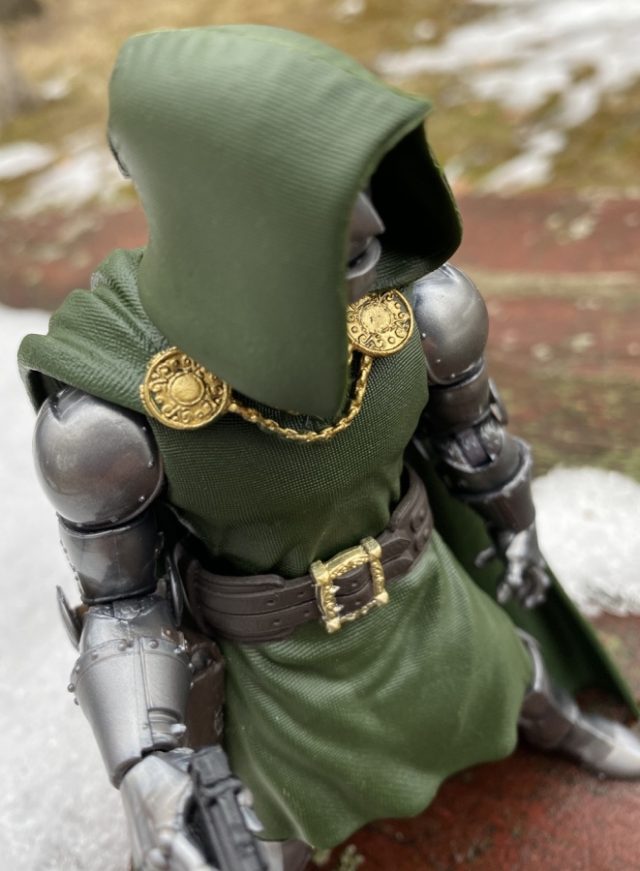 This is the kind of attention to texturing I expect to see on a $500 statue and not on a toy that costs an Andrew Jackson. 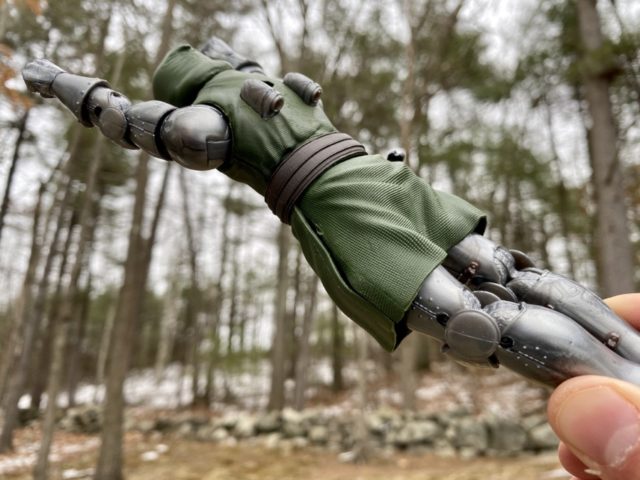 The cape pegs nice and tightly into Doom’s back, but you can remove it by popping off Doom’s head to reveal a pair of thrusters on his back. So you can use your imagination to decide if this is a Doombot or just a plain old flying Dr. Doom. A very neat extra thought that goes above and beyond from Hasbro either way, though! 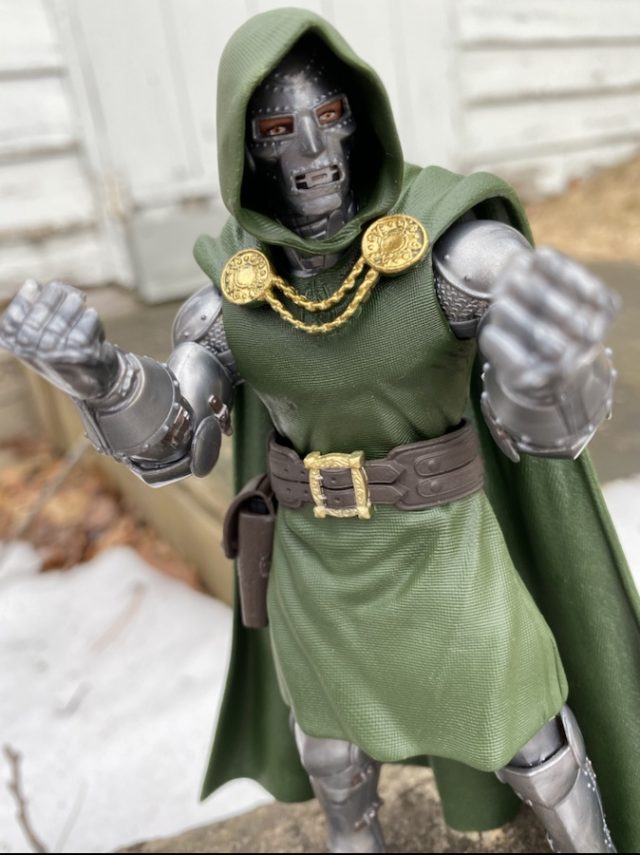 While you’re taking the cape on or off, you can also choose whether you want your despot to be sporting a classic or modern mask. I much prefer the look of the modern Doctor Doom mask, but hey—might as well let every collector choose which style they prefer for themselves, right? 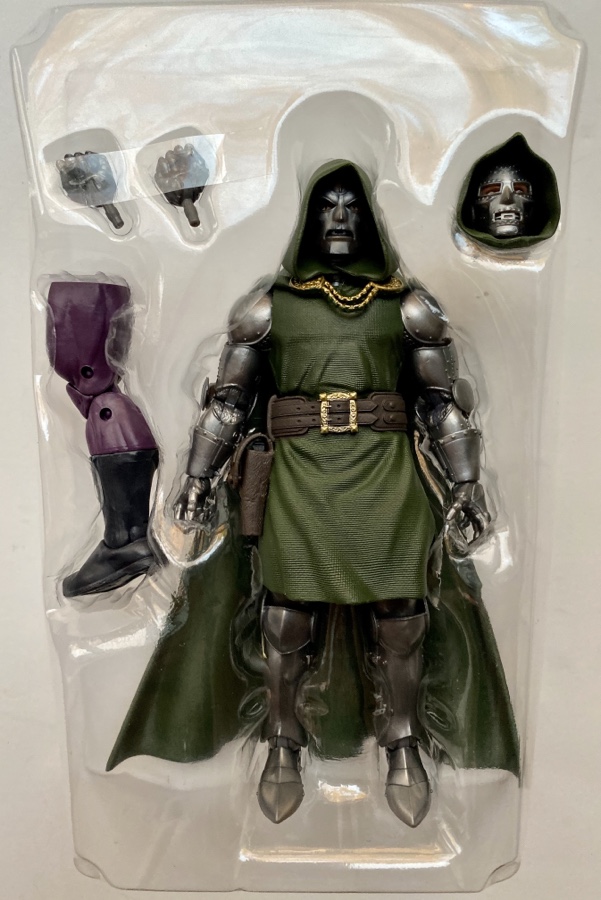 You also get the option of swapping out the grasping hand and gesturing hand for a pair of fists. While Victor von Doom isn’t your usual fisticuffs brawler, he has been known to throw down for a good tussle now and again! And I will never fault a figure for giving us extra interchangeable parts for more options. 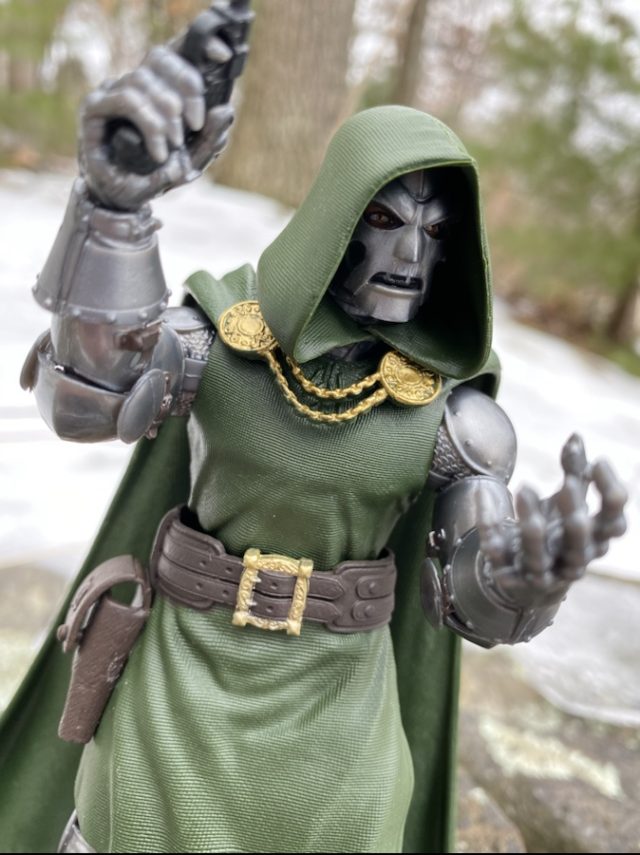 Von Doom’s left hand is perfectly posed for giving a monologue on how Victor will crush Richards, while his right hand has a smoothly-working trigger finger for securely aiming the included pistol. 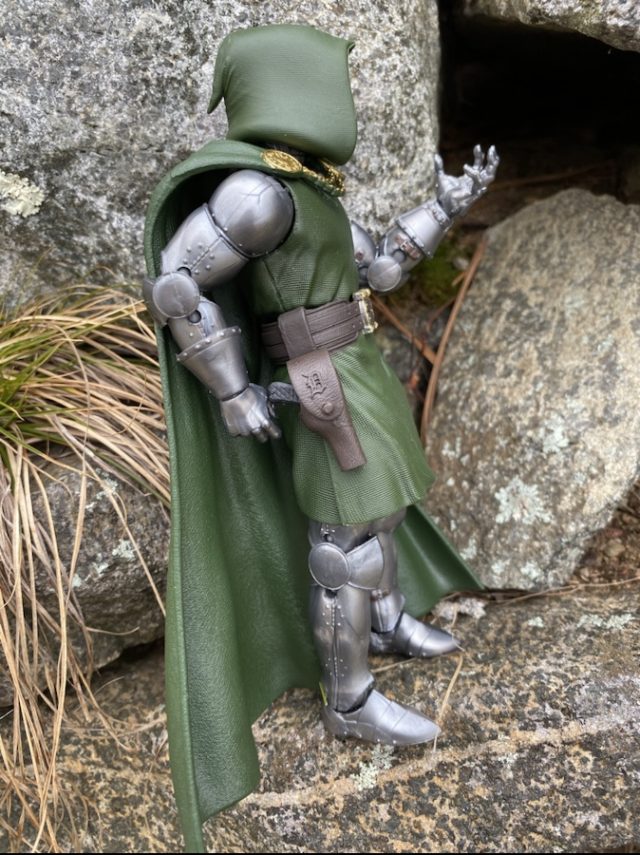 And speaking of the gun! It actually comes pre-inserted into the holster on Doom’s hip in the package, so it’s possible many packaged collectors won’t ever even realize it’s their at all. The holster looks brilliant with its leather-like texture and artsy “D” (for Doom—duh) monogram etched into it. That monogram is Hasbro going above and beyond on this piece again. 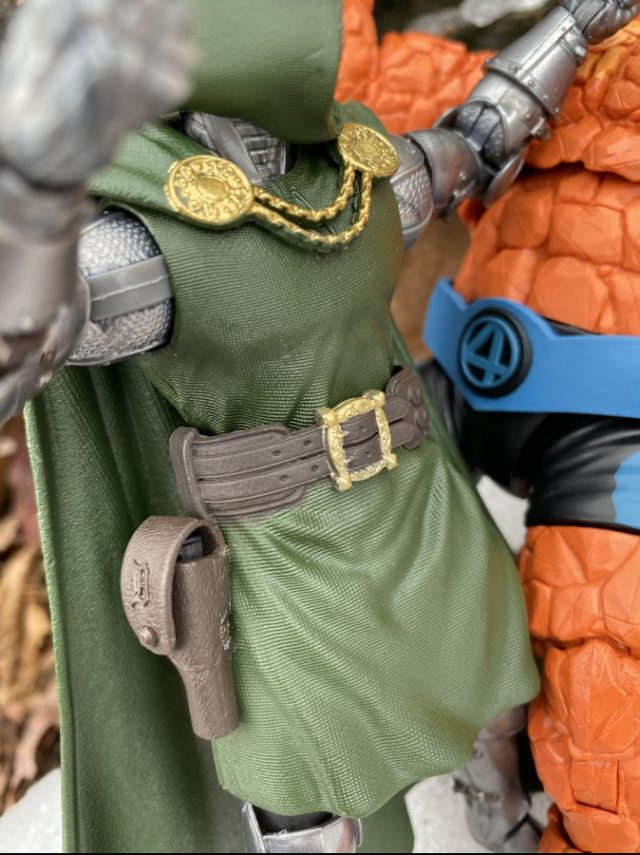 The holster pegs shut well and holds the pistol exquisitely. It’s probably the best holster that Hasbro has ever done, given how detailed it is and how efficiently it works. The gold belt buckle and cape clasps also have ornate decorations on them to remind us that Doom doesn’t believe in dressing down. These pop nicely and look great. 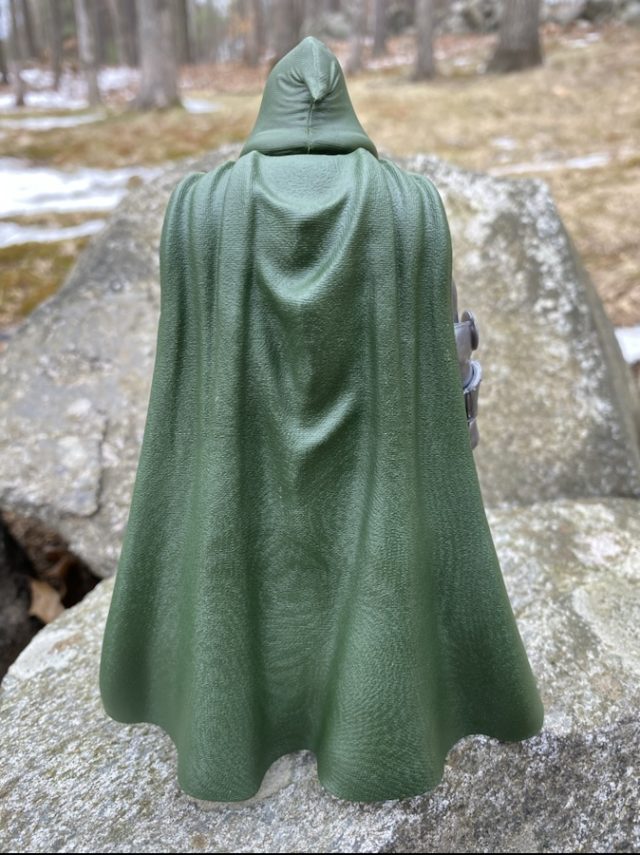 One drawback of the cape is that it makes the monarch just a tad back-heavy, which can make getting him to stand up slightly irritating because of his soft plastic skirt restricting the leg articulation slightly. It’s not a huge impediment—and you can certainly still get Doom into most non-acrobatic poses—but it will tick some people off when their Doom falls back due to the weight of his cape just when they think they’ve achieved the ideal pose. 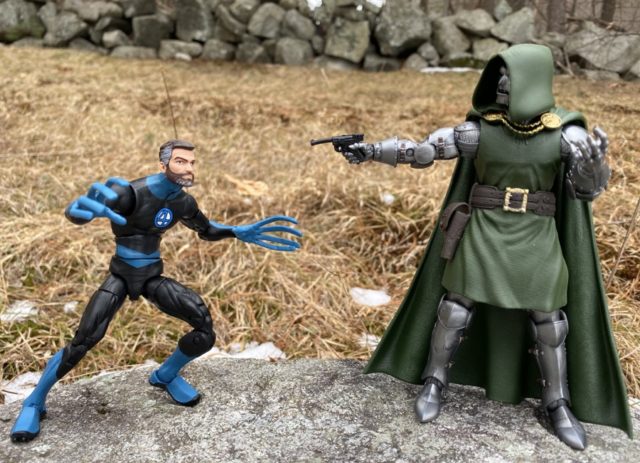 A display option that isn’t included that I’ve been surprised to hear gripes about is an unmasked Victor von Doom head (with scarring, unlike the Infamous Iron Man unmasked portrait). I think that a relatively small percentage of fans would want to display an unmasked Victor, but for those who feel they’re missing out, hopefully Hasbro will do another version with that option someday. 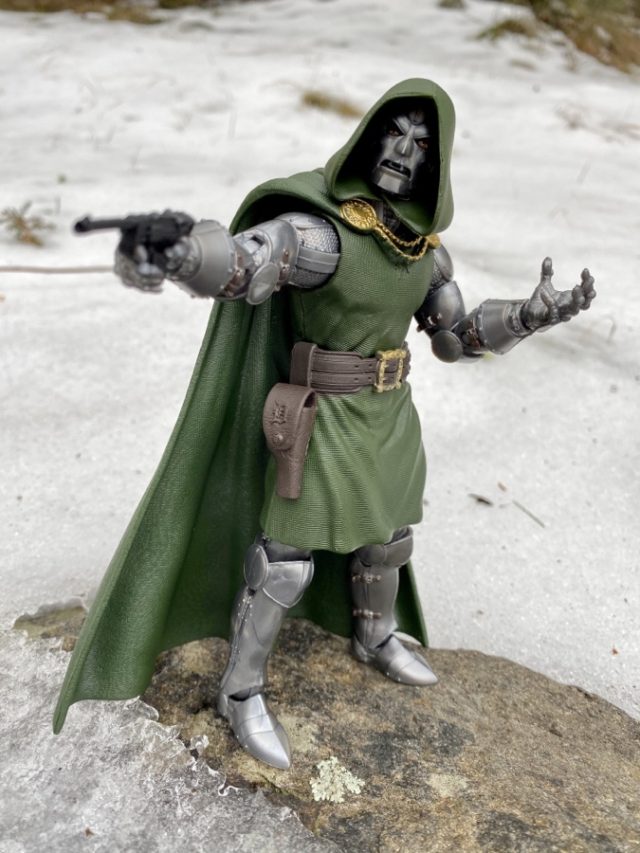 Paint-wise and plastic-wise, I am highly satisfied with this figure. All the joints are tight and hold position well, and none of the plastic feels likely to rip or tear easily. Paint deco is clean and neat to the human eye, although I can see a few trivial imperfections in hi-res photos I can’t see normally. The colors of the tunic and armor look swell to me, and I’ve got no complaints about the detailing when looking at it with my own eyes. 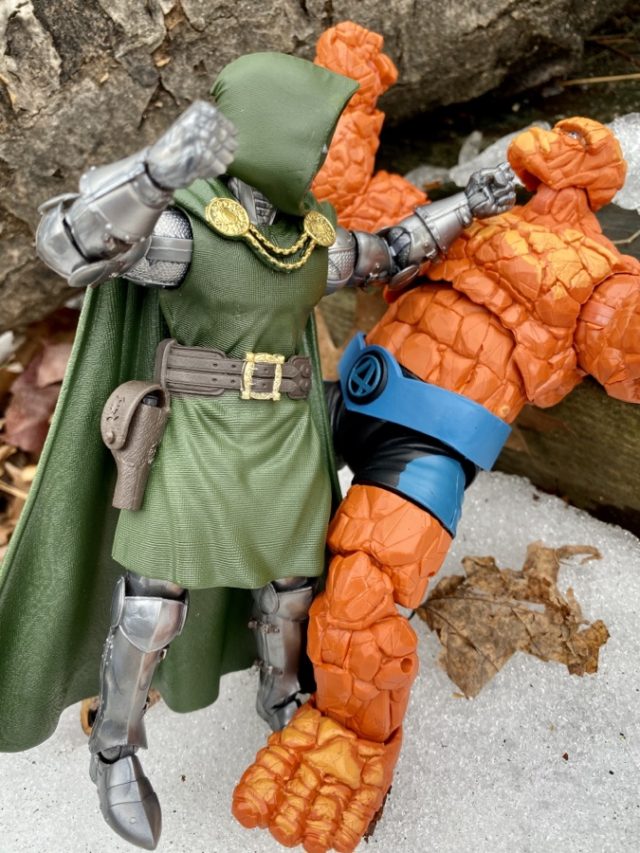 For posing, we have the standard level of super-articulation with some restrictions due to the costume design: 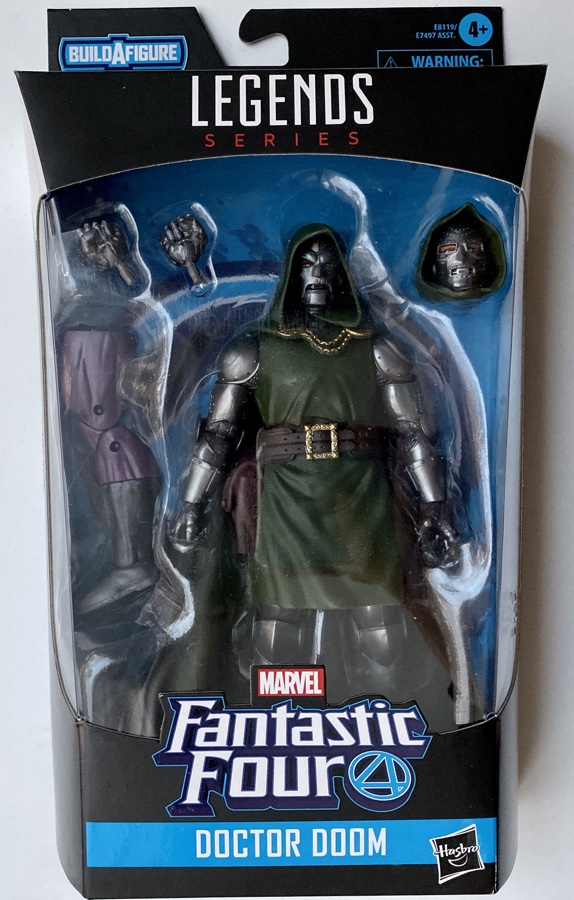 The skirt and hood and cape are all a bit of a hindrance for the range of various ranges of motion on this figure, but this isn’t Spider-Man—it’s Doctor Doom. For my purposes, I can achieve most of the poses I’d ever envision putting this maniacal monarch into. Your dynamic posing needs may vary. 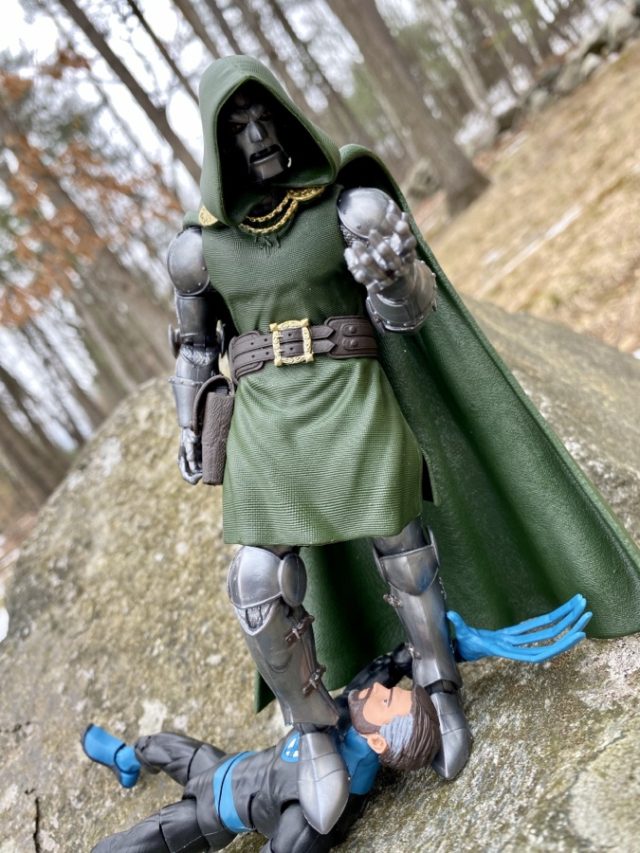 Overall: I want to give in to the hype and grant the new Dr. Doom Legends figure the legendary ‘A+’, but I just can’t quite do that. This is easily the best 6” Doctor Doom figure ever made, in my opinion, but I think it’s still possible for Hasbro (or maybe a higher-end company like Mezco Toyz or Revoltech) to evolve an even more definitive and perfect figure of Victor von Doom.

The level of sculpting detail on this figure is absolutely glorious, and the alternate classic head and fists are certainly welcome additions. This is a Marvel Legends Doom figure that will nicely fill the hole in any fan’s collection and look amazing doing so.

Even so, I think it’s possible to up the ante with a more flexible cape that’s less back-heavy, a slightly better range of motion and an alternate unmasked Victor head. As it stands, this is an excellent action figure that falls barely short of perfection, but is still a must for most collectors.