In DC Deck-Building Game: Rebirth, players can play as members of the Justice League: Superman, Batman, Wonder Woman, Aquaman, Cyborg, The Flash, Jessica Cruz, and Simon Baz. Position matters, as players must move their characters around the cityscape to find the cards they want for their deck and to stop Villains.

“Rebirth is a Scenario-driven experience, and is typically played in Campaign Mode, though there are other ways to play,” said Matt Hyra, Lead Designer of DC Deck-Building Game: Rebirth. “At the end of each session, players keep track of various milestones on record sheets that can have consequences in the next Scenario. This game lets you become a true hero as you strategize with your teammates, use Assist cards to help each other, and even position your character to stop Villains in their tracks, protecting your fellow players . . . and the city too!”

Each Scenario includes special rules, new cards, and different Locations. There are even Side Missions that players can take on to gain new cards and repair Locations. The game is played cooperatively, but there are Competitive and Solo Modes as well. It is compatible with other games in the DC Deck-Building Game series. 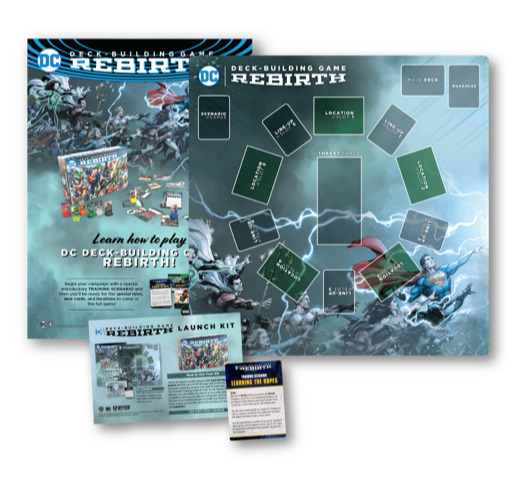 To coincide with the release, Cryptozoic will also make the DC Deck-Building Game Rebirth Launch Kit available to retailers. The kit is intended to drive awareness of the game and its new mechanics, help stores run demos, and provide some potential prizes. It includes a playmat, the introductory Scenario Card “Learning the Ropes,” a poster, and an info card. Retailers can order it from their distributors for $20.

DC Deck-Building Game: Rebirth will be available at Gen Con and hobby retailers across the U.S. starting August 1 for a retail price of $45.