Perhaps appropriately, the last figure in my series of X-Men Age of Apocalypse Marvel Legends reviews is also the one and only figure in the wave that Hasbro has previously done a 6” version of! While the original Hasbro AOA Sunfire figure used to sell for big bucks on the aftermarket, the new 2020 Marvel Legends Age of Apocalypse Sunfire is one of the few figures in the wave selling for at or above MSRP. Has Hasbro one-upped their earlier effort to deliver the best AOA Sunfire action figure ever? 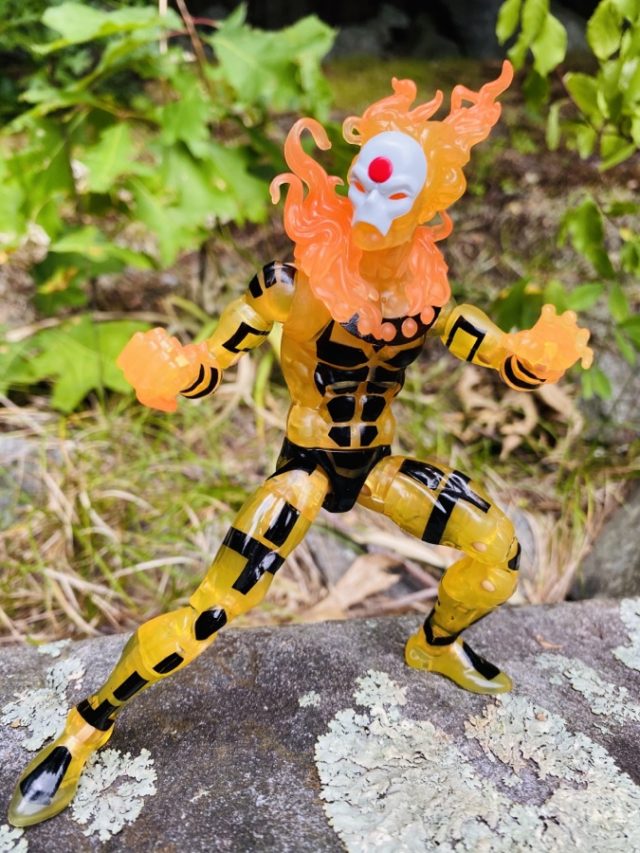 While X-Men Age of Apocalypse is at the peak of my list of favorite comic book stories ever, I’m not blind to the fact that much of this 2020 X-Men Legends wave has been gathering a bit of dust at my local retail stores. Hopefully there’s enough sales that we do get a desperately needed second wave to finish off the key players from the saga, although I am a little worried about the prospects of that right now.

That said, one figure that has sold out solidly at all my local stores and is still retaining his retail value and above is the final figure I have left to review from the Sugar Man Series: Sunfire! 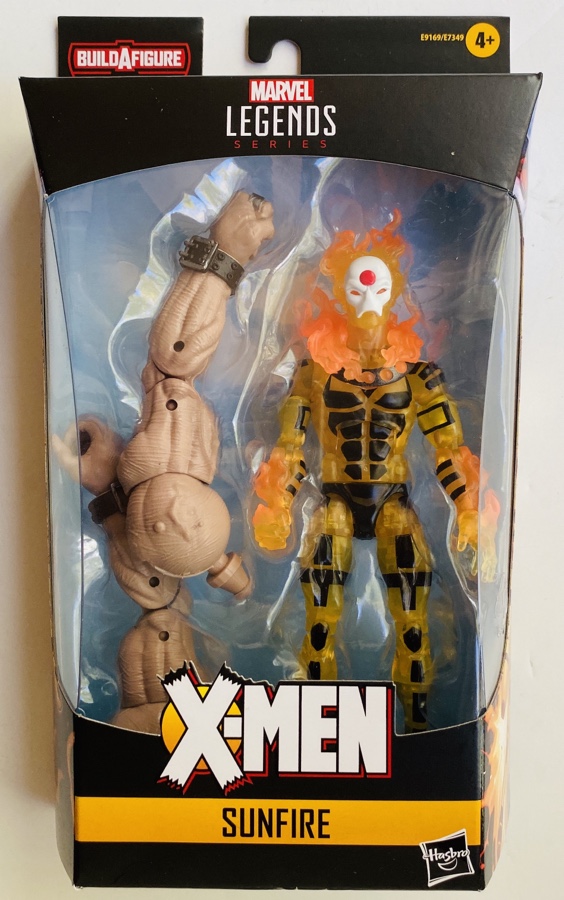 Shiro Yoshida is a character I had zilch sympathy for prior to the Age of Apocalypse, but his appearances as part of the Astonishing X-Men roster really won me over—enough so that I was psyched for a new version of Age of Apocalypse Sunfire, despite Hasbro having done one previously in 2009. 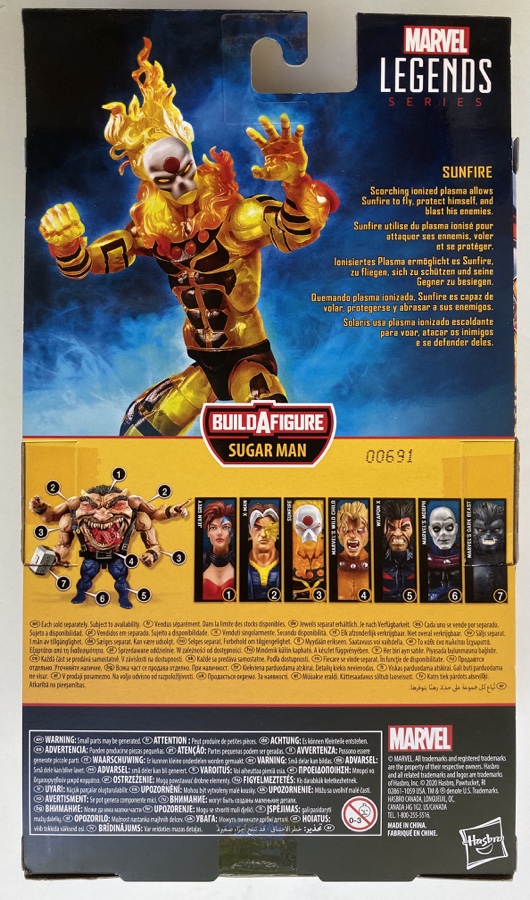 First up, let me answer the big question: is this figure a humongous improvement over the Fan’s Choice Sunfire…? Honestly, not really—but I do think there are some noteworthy improvements. 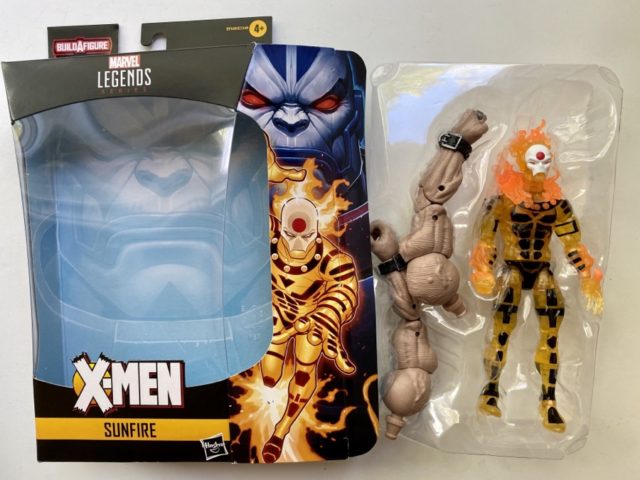 I think the translucent yellow-orange plastic used for the body mold here looks a bit more fiery and true to the character’s comic appearance than the earlier version, and I think the black paint markings for the body are slightly nicer and more detailed. 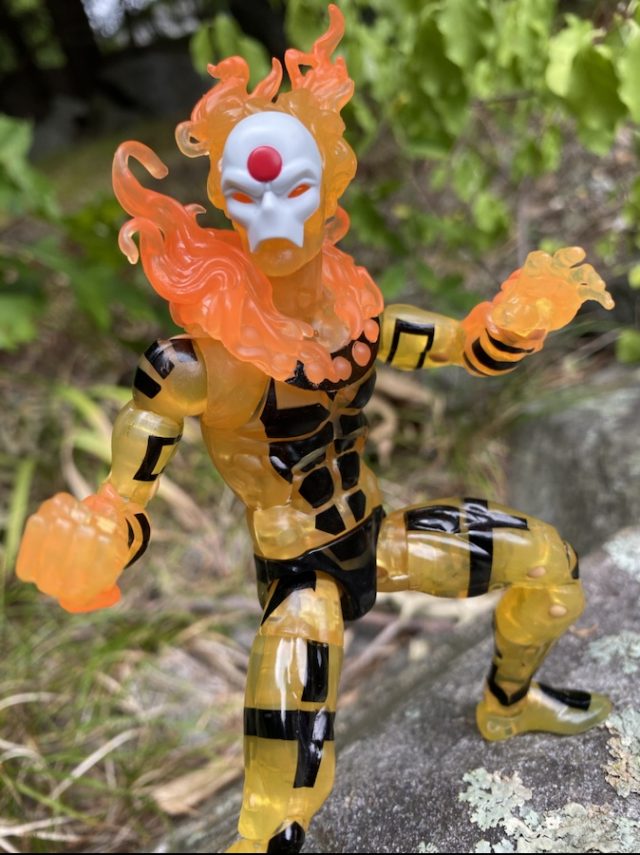 The flames also don’t rise quite so high above the head this time, which is less distracting an incremental improvement in my eyes. I’m also happy to see the thigh-flames omitted this time, as they don’t fit my vision of AOA Sunfire in my head. 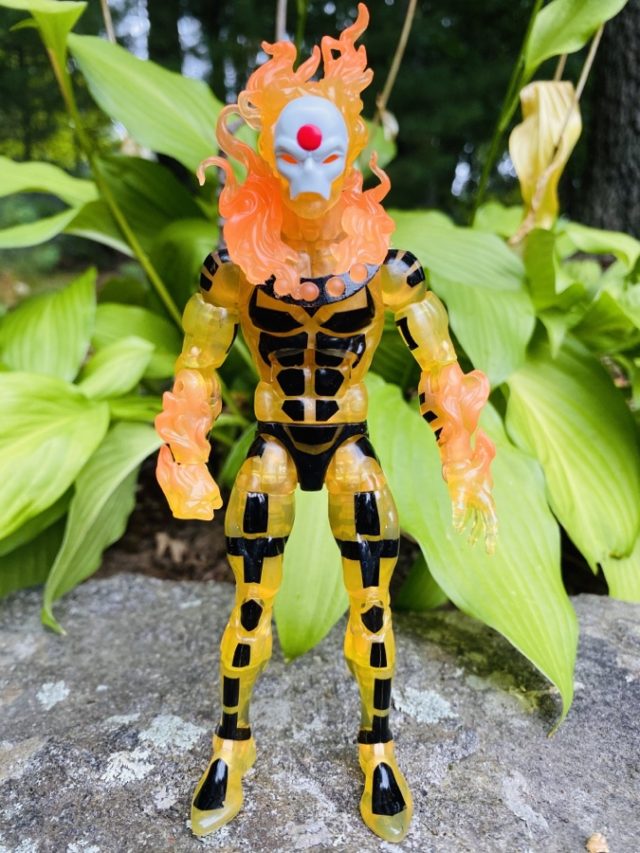 Of course, for most folks, this will be their first-ever Hasbro Sunfire Age of Apocalypse figure. Is it any good…? Hellz yeah. As mentioned, the aesthetic of the black paint details on translucent plastic is glorious, and I think that just the right amount of fiery effects are permanently attached to the figure. 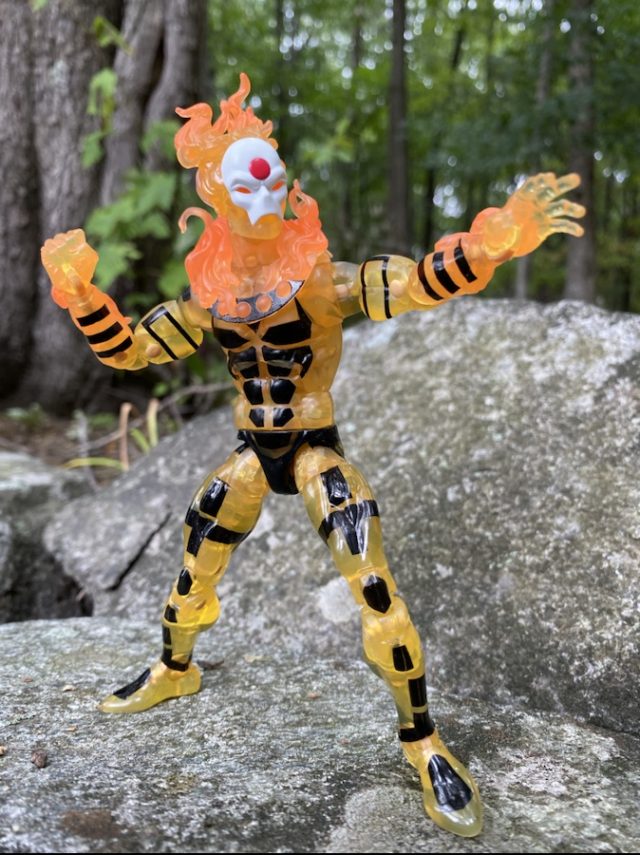 Like the 2009 iteration, Shiro’s left hand is open and his right hand is a fist, so you can put him into a number of different poses. The permanently attached studded collar piece with flames looks truly awesome, despite inhibiting the head articulation from looking upwards. 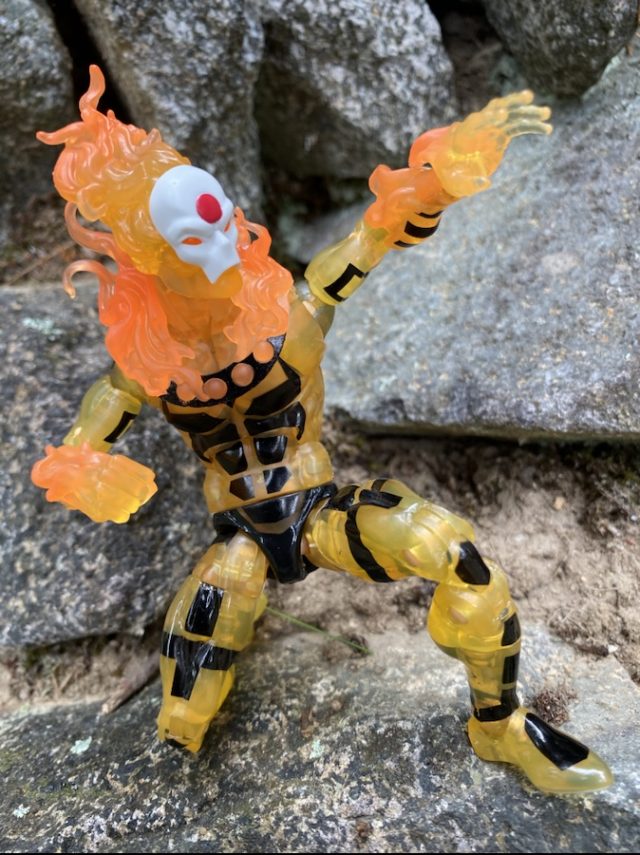 And speaking of which: the articulation here surpasses the old version by adding the new butterfly swivel shoulders, which adds a whole lot of potential variety and range of motion when posing. The complete articulation set includes: 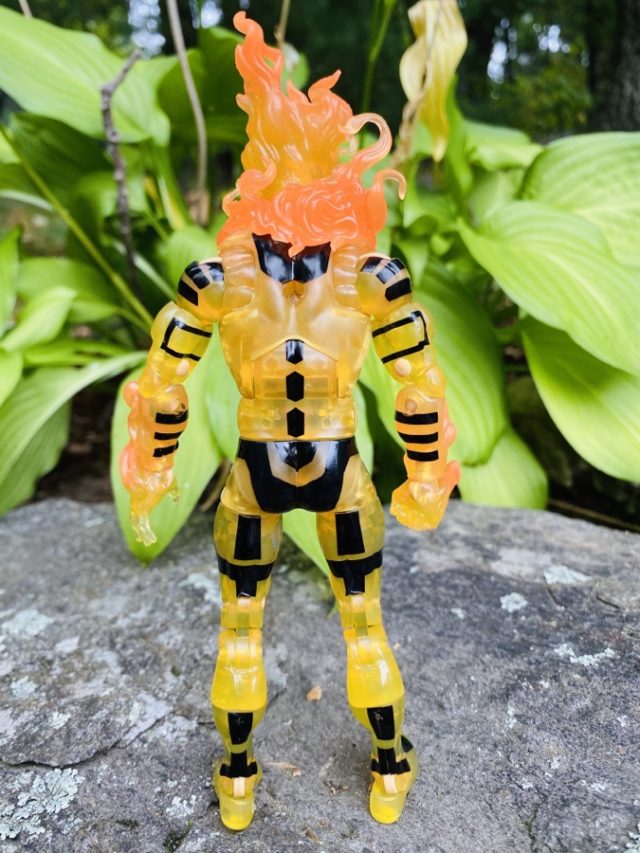 I had some trepidations about possible issues with loose or floppy joints due to the translucent plastic used, but I was very pleased that my figure feels solid as can be—more so than quite a few non-clear ML 2020 figures, honestly. QC was excellent all-around on this action figure (at least, on mine). 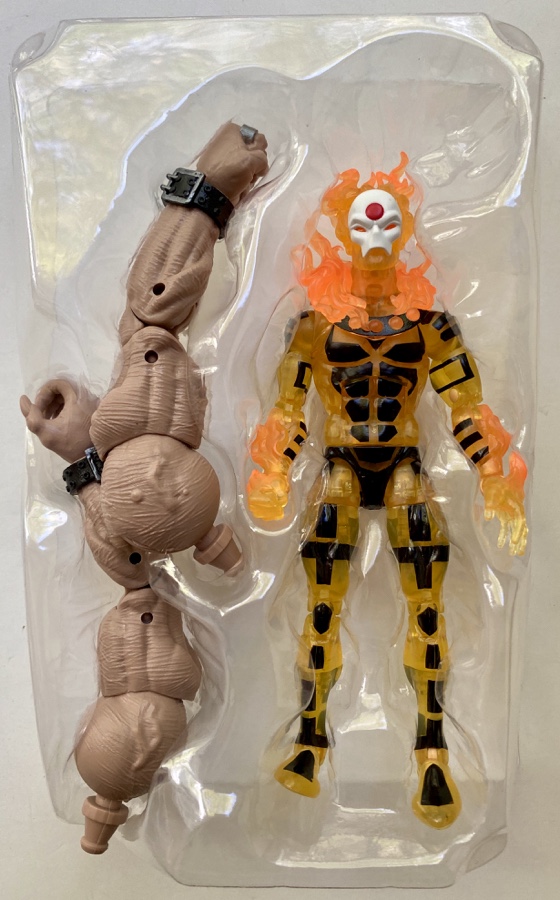 The only real bummer about this figure is that we again get squat for accessories beyond two of the Sugar Man Build-A-Figure arms (yes, two). It sucks that there are no fireballs or fire-rays or other accessories to attach and really raise the bar on the potential of this figure, but I suppose getting a pair of thick Sugar Man BAF arms isn’t all that bad, though I am still disappointed. 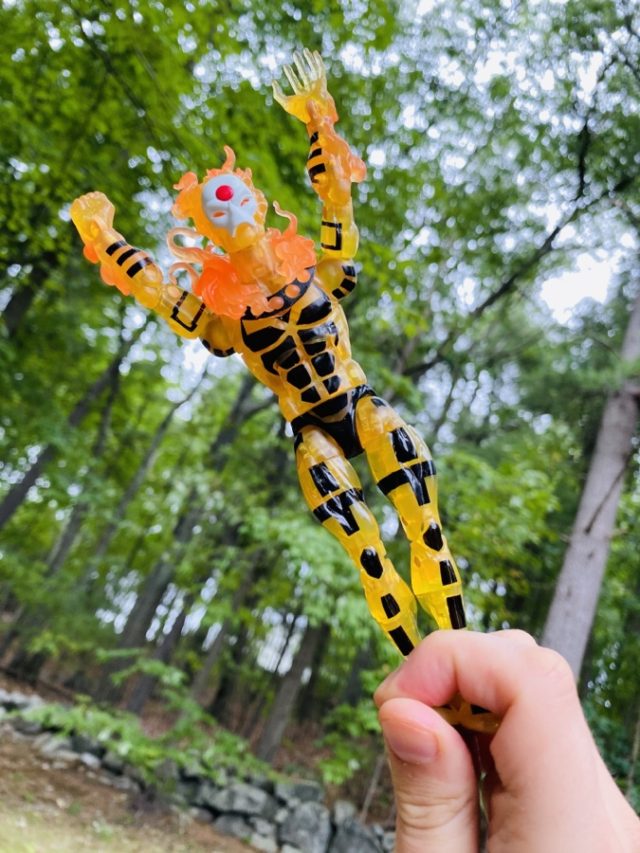 Overall: What you see is what you get here: a 6” Sunfire figure that looks freaking awesome, but is lacking the bells and whistles of extra accessories to put him into the range of “perfection”. I was surprised by how effectively Hasbro captured Shiro’s look from the comics with black paint detailing over the translucent plastic, and the flaming head and add-on pieces over the main body are all sizzlingly hot.

I don’t particularly like that the head articulation can only look forward and not straight up because of the flames across the back—nor am I thrilled that there’s no cool fireball effects or separate fire blast accessories to clip on—but this toy looks cool enough and accurate enough that I love it all the same. If Hasbro’s goal was to surpass their limited exclusive version of this from years past, it’s mission accomplished.