If there was any speck of doubt left that we are living in a crazy golden age of Marvel Legends action figures, the subject of today’s review should remove all doubt. She’s one of the wildest and most off-the-wall additions to the Spider-Man Legends series ever (and I think that says a lot!): the Hasbro Marvel Legends White Rabbit figure is shipping now from online retailers and flying off the shelves in the stores where she’s appeared! Is this whimsical and elusive White Rabbit worth chasing after? 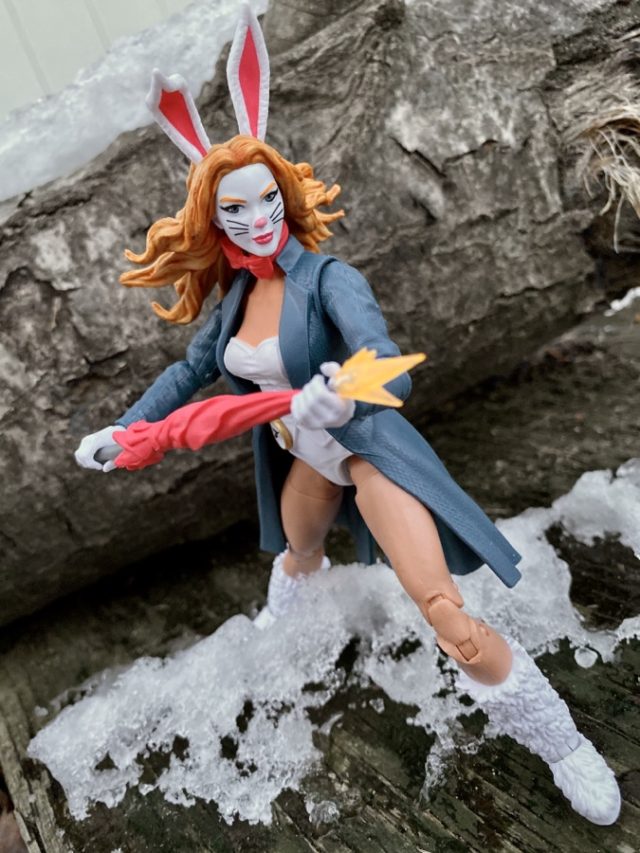 Ever since reading several Spectacular Spider-Man comic books featuring White Rabbit (and the Fabulous Frog-Man!) as a child, I’ve always wanted to have a little action figure of her (and Frog-Man!) for my shelf. But, well… whimsical “joke” characters don’t generally get mass release toys made—especially not minor female villain joke characters with only a handful of appearances.

But the strength of the modern Hasbro Marvel Legends line is at the level of the Juggernaut himself, and Hasbro hath decreed that this was one seemingly impossible dream that would actually come true! This is virtually certain to be the only toy ever made of this character—is it a good one? 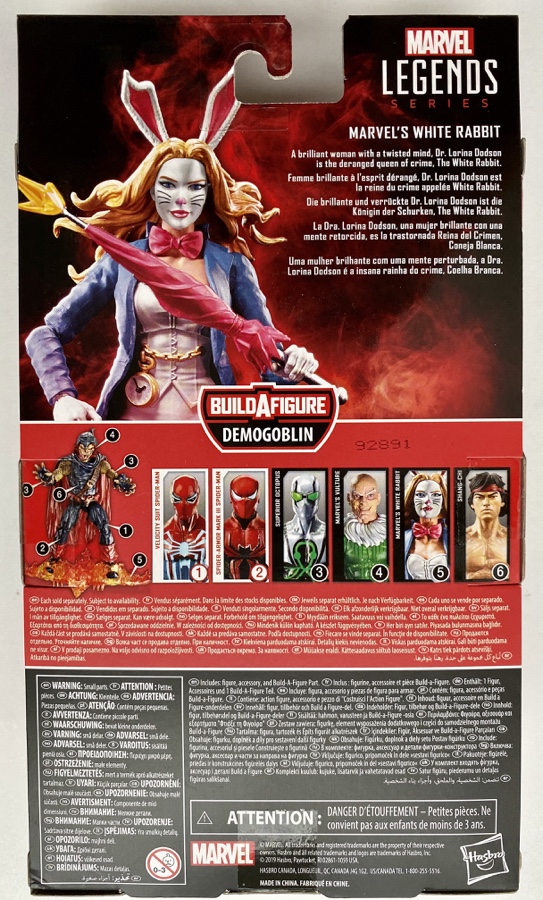 Once again, I am able to answer with a definitive affirmative thanks to the genius team at Hasbro developing another bang-up, near perfect (but not perfect) action figure of a D-List (and maybe lower) character! 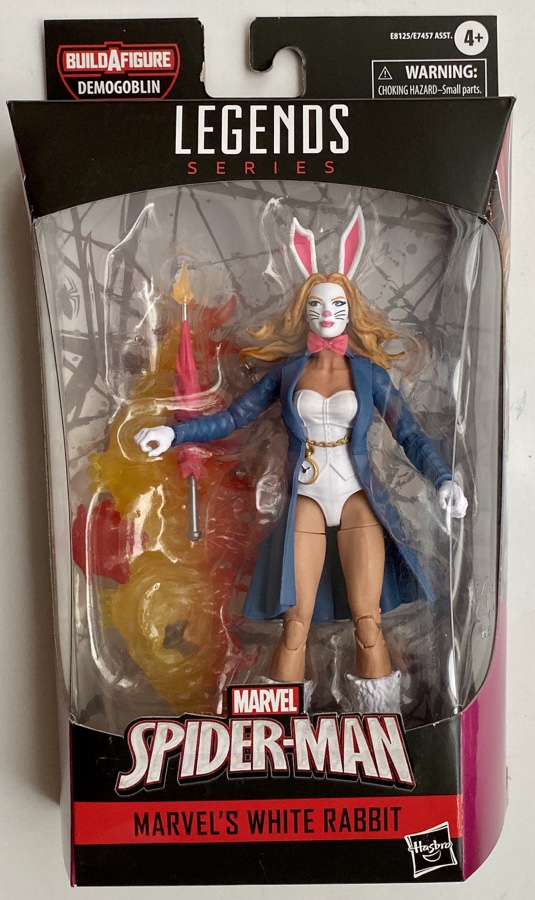 When we saw the corset mold debut for the Venom Series Typhoid Mary in 2018, I instantly set my hopes high that that tooling was being keyed for a future White Rabbit Legends figure. And while she didn’t come last year like I hoped, I’m thrilled to have this hare in my home now at last! 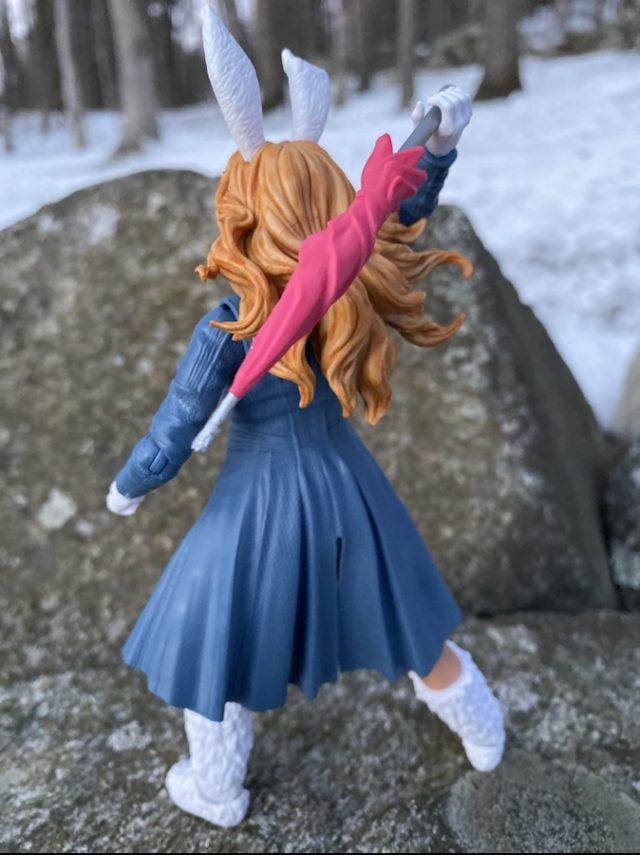 For a character with limited name value and recognizability, Hasbro went above and beyond to make this figure look and feel special. The texture and lines sculpted into the jacket and sleeved arms are fantastic, and I love that the chain and pocket watch are solidly molded into the lower part of the corset. The fluffy boots are also downright killer. 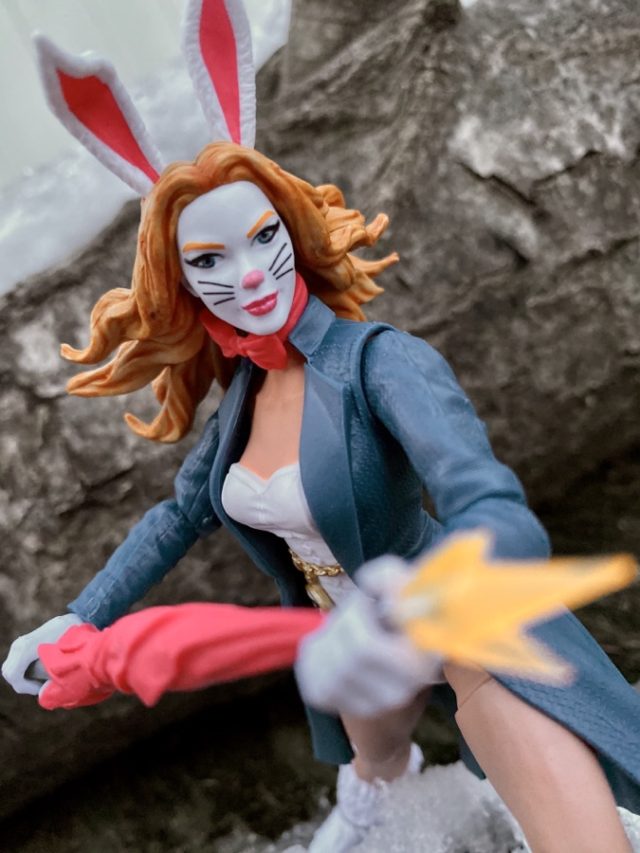 But where this figure excels even more is with the wonderful head sculpt, complemented by the cute bow tie that fits perfectly underneath. The wash in the hair gives it the perfect color mix, and the right ear being bent forward a bit adds loads of life and personality. 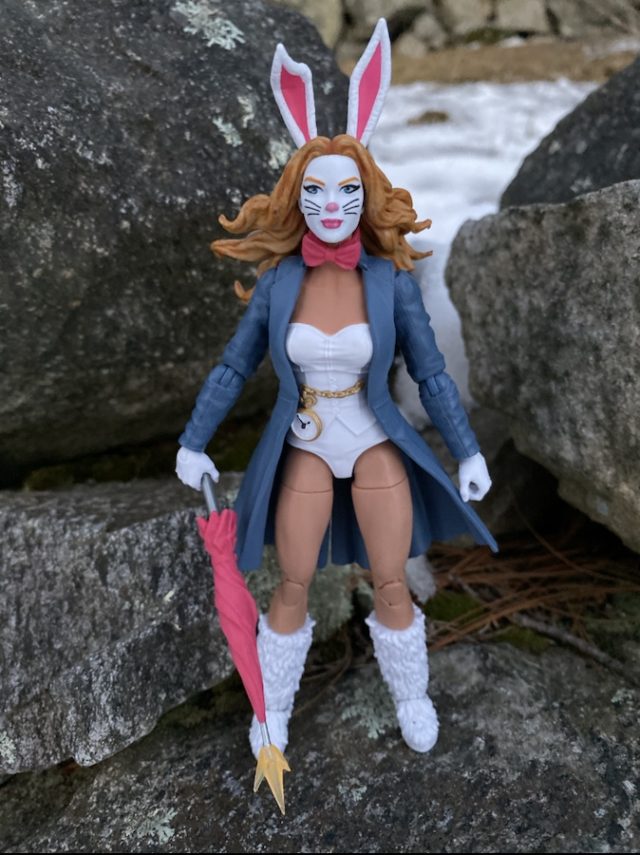 I was worried the face would present difficulties for the factory, but quality is out of this world—even with tiny black and blue and pink details having to be painted onto a white face. The paint deco is expertly applied, and I think it’s easy to interpret the “neutral” face as a variety of emotions. I straight-up love this. 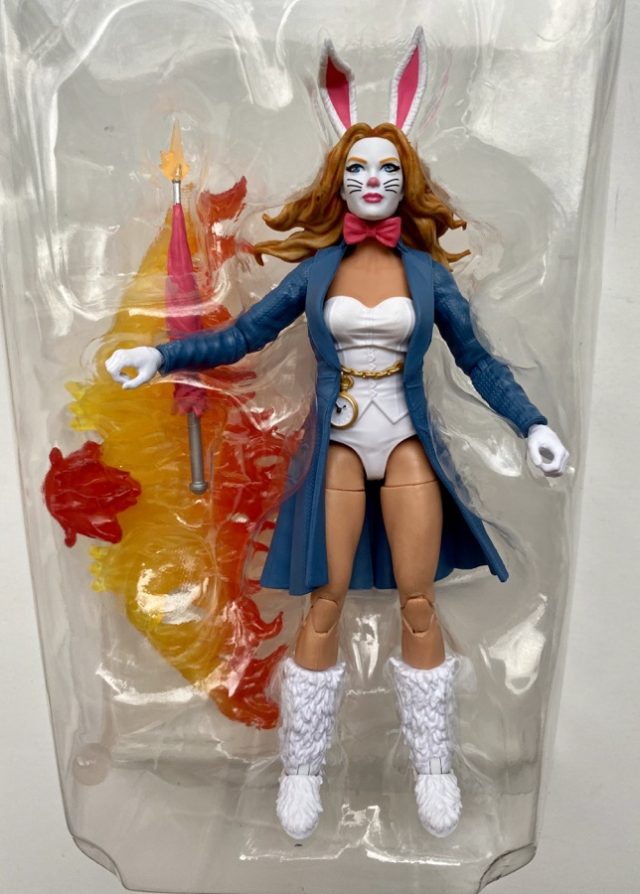 Along with the incredibly rad flaming Demogoblin goblin glider, Marvel Legends Spider-Man White Rabbit comes with one accessory of her own (or is it two?): a pink umbrella gun with a removable “firing” effects piece. 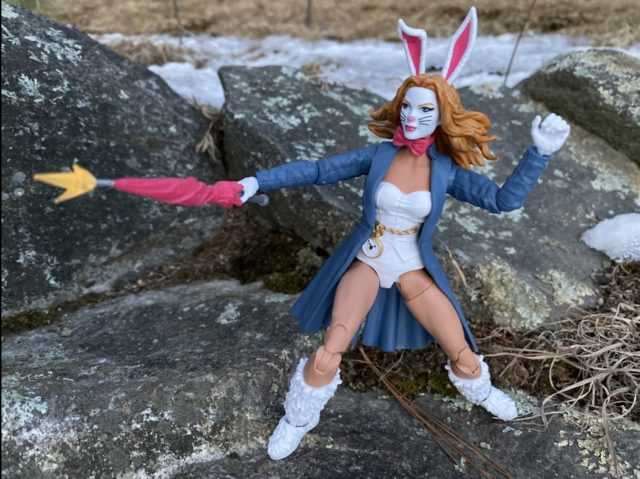 The effects piece fits snuggly over the umbrella tip and adds a dynamic feel to the whole figure, so I hate taking it off. But if you want your White Rabbit 6” figure standing around a bit more neutrally, the umbrella gun still looks nice even without the effect attachment. 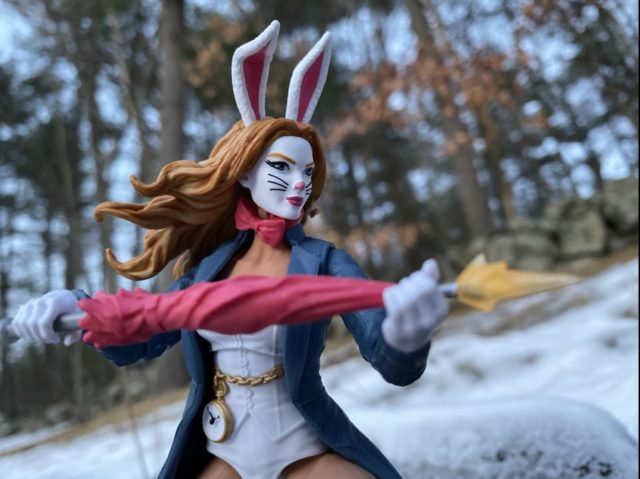 The umbrella gun itself thankfully does have some paint apps on it, with a pink middle and silver for the handle and tip. It’s a nice-looking piece that seems to be sized appropriately and is an absolute essential add-on for this character. Score. 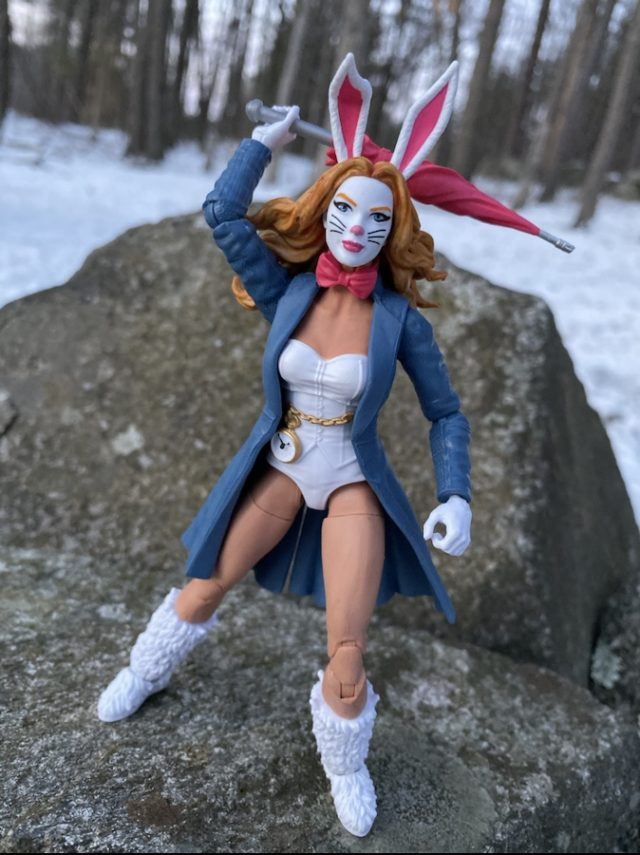 My only real disappointment with this 6” White Rabbit action figure is that she features the typical limited female upper-body articulation, which makes it difficult to achieve most two-handed poses and even to make it look natural with the umbrella slung over her shoulder. The articulation we get here isn’t bad by any stretch of the imagination, but I really would have liked butterfly swivel shoulders or even just swivel biceps. 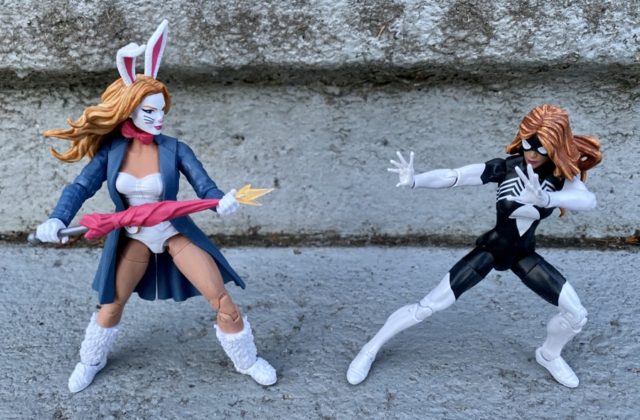 The blue jacket is made of such a soft plastic that it doesn’t restrict the existing articulation at all, and the plastic quality on the body is high on mine with zero loose joints and nothing feeling like it will rip or break. 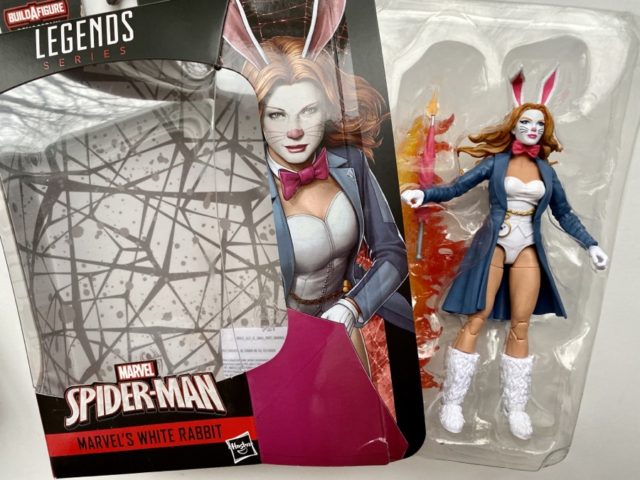 Overall: If it wasn’t for the articulation inhibiting me from easily positioning her into some of the poses I want, I might legit considering making the ML White Rabbit an ‘A+’ figure. That temptation is removed by a lack of upper body articulation making it harder to pose her with her umbrella gun than I’d like, but make no mistake: I love me this action figure.

From the ample amount of new tooling created for this Spider-Man Legends White Rabbit to the clean paint apps and way-cool umbrella gun (with removable effects piece tip!), this figure puts a huge smile on my face. This is the golden age of rich character depth and diversity, Marvel collectors. Enjoy it!